Ten on Tuesday: Short straw edition
Where are they now?

Alabama on my mind

I'm celebrating my 10th Blogiversary on the First Day of Spring, with the St. Patrick's Day observance of 9 years Quit (Smoking) along the way! To mark the occasion, which totally blows my mind, I thought I'd share TEN for TEN. 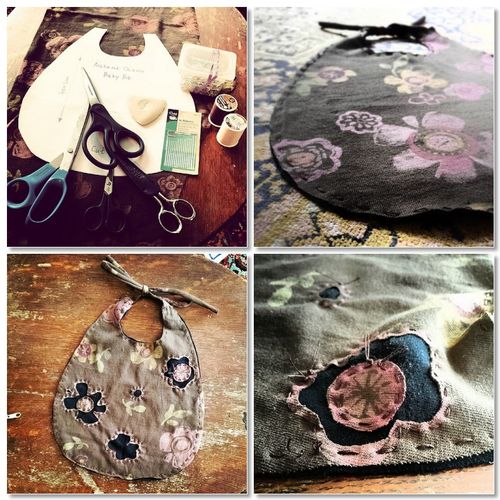 Alabama Chanin Baby Bib
1. My first @alabamachanin project, needing all the scissors!, 2. There will be no cutting on this one, 3. I cut one!, 4. Cut.

While I've always sewn -- there's never been a time when I've not had a sewing machine -- and I've even done some sewing in the past 10 years (skirts, a bag), it's never something I've been passionate about. I've had fun over the years sewing up curtains, making a few pieces of clothing for myself, and sewing some things for the girls, but mostly "sewing" has always been more like "mending" and that's not something I've ever enjoyed. Part of the problem is that I've never had the ideal location for sewing and set-up/tear-down of the machine was always a chore.

It's funny that hand sewing has never crossed my mind. I'm a cross-stitcher from way back, working plenty of reproduction samplers on tiny-count linen, and I've even done some (a very little) hand piecing and quilting, but I never thought to join to pieces of fabric together by hand to actually make clothing.

Enter Alabama Chanin. I'm pretty sure my introduction was via Kay, as I read all of the Alabama Chanin-tagged posts at Mason-Dixon Knitting and this one, in particular. I didn't hesitate for a second when Craftsy introduced Natalie Chanin's class, Hand-Embellishing Knit Fabric: Stenciling, Appliqué, Beading and Embroidery.

I purchased Natalie's class last March and watched straight through. After agonizing over which one of the three AC books to make mine, I finally bought Alabama Studio Sewing + Design in April. I had the brilliant idea to actually send the link to my Amazon Wish List to my family this year, so between birthday and Christmas, my book collection was completed!

The rest of spring and summer was busy with wedding details, and then baby prep! In my case, that meant months of non-stop baby knitting!

On the first of the year, though, things changed and in the spirit of "I begin as I mean to go on," knowing that I wanted to make it a priority this year, I began... to sew. There's a very real possibility that I suffered a little knitting burn-out as a result of all those baby projects and, as it turns out, there's been a LOT more sewing so far this year -- hand sewing -- in the knitorious Making and Doing departments. 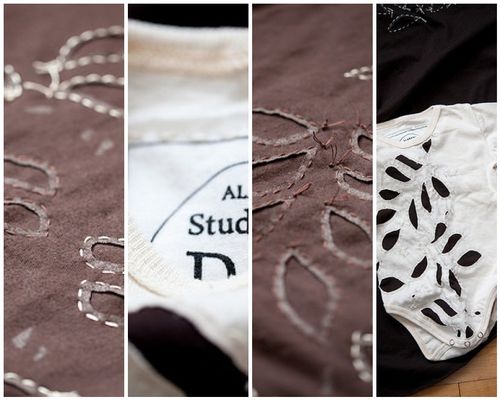 The bibs were practice for the DIY Onesie + Baby Blanket. I lucked out with the fabulously printed fabric for the bibs, and the Onesie + Blanket came already stenciled. There's a lot to these projects, start to finish, and having a few steps already done was a great way to begin without feeling overwhelmed.

I'm all for Slow, but I also know a few things about myself. For instance, I know that I don't want to cut a large stencil by hand. I don't even want to cut a small one. After agonizing over the choices, I ordered the pre-cut all-over stencil for Angie's Fall during a recent promotion. I intend to use it instead of the Paisley design for the coat pattern that's part of the Craftsy class... and much more.

I made my first Alabama Chanin-style top using a favorite boatneck to cut the pattern and stenciled with Angie's Fall! I rushed in and made a couple of mistakes -- not cutting the armholes and neck as close as I should have (figured out in time to fix) -- and it was just a wee bit wonky overall. I cut a white t-shirt for the front & back, and rummaged around in Rusty's closet until I found a tan t-shirt I liked for the underlayer. An experimental piece in many ways, I only doubled up the front; the back is a single layer of fabric, left plain. 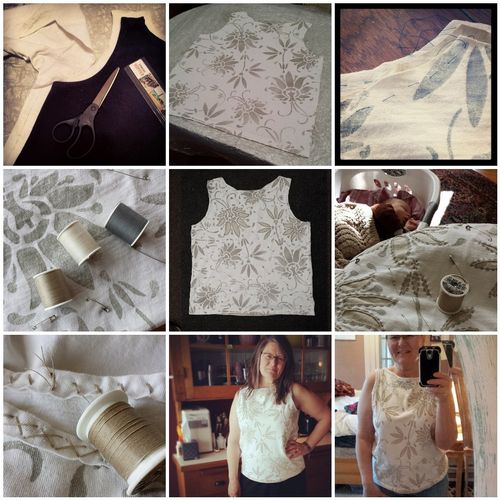 Boatneck Top in the Alabama Chanin Style
1. Cutting. New project..., 2. I'm pretty sure there was an involuntary audible gasp, 3. Basted, 4. Decisions, decisions, 5. More than a little bit thrilled, 6. The best way to spend a Wednesday morning..., 7. The sewing is done!, 8. Maddy snapped a couple, 9. Boatneck

For the stenciling, I mixed acrylic paint with fabric medium that I found in my craft cupboard, and thinned it with water to fill a small pump spray bottle. I used the dogwood-colored thread for the reverse applique stitching, leaving all of the smaller shapes and the stems unstitched. I very crudely worked a large cross-stitch for the armhole and neck binding.

I am THRILLED with the result. I love this wonky little top!

I mentioned that I found some t-shirts while thrift shopping over the weekend. Fascinated by the construction of the piece, while not at all certain it's actually going to work for me style-wise, I have begun to sew the Corset Top from the Alabama Stitch Book. After one false start -- lessons learned and a trashed t-shirt -- I'm on my way with an old Hootie & The Blowfish concert tour tee. 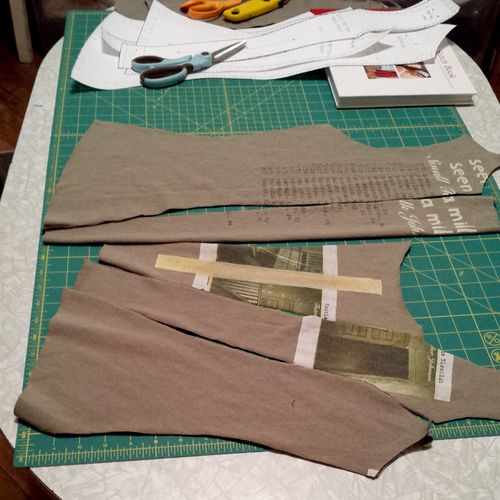 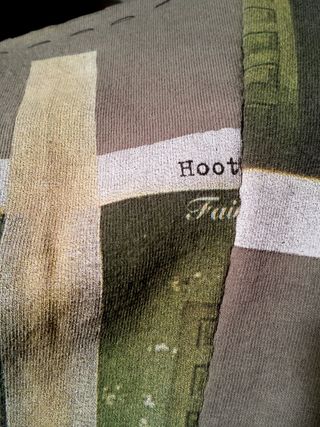 Um, wonky little top? I LOVE it. It's perfect on you.

Your top is something I would buy in a heartbeat! Well done, my friend! Can't wait to see your next AC project.

Note to commenters: If you don't win, buy the class! It's worth every penny.

These books are inspiring! I copied the skirt pattern last weekend- now the search for fabric!
Love what you have done!

I understand the lack of a dedicated sewing space. ugh. In spite of that, I am a quilter. I finally had to tell Mom that asking a quilter to mend clothing was like asking Michelangelo to paint a house. It can be done, but there is no joy or creativity in it.

I love the AC corset pattern!
Do you need the books after you take the course or vise versa?