Ten on Tuesday: Let's learn something
Scotland is for Selfies... especially at Castles

Ten on Tuesday/Wednesday:  10 Things I Did Last Weekend

Well, it was definitely not a typical weekend -- holiday or otherwise! We returned home on Tuesday (yesterday) from 12 days in Scotland, so the weekend was the end of a pretty great vacation. 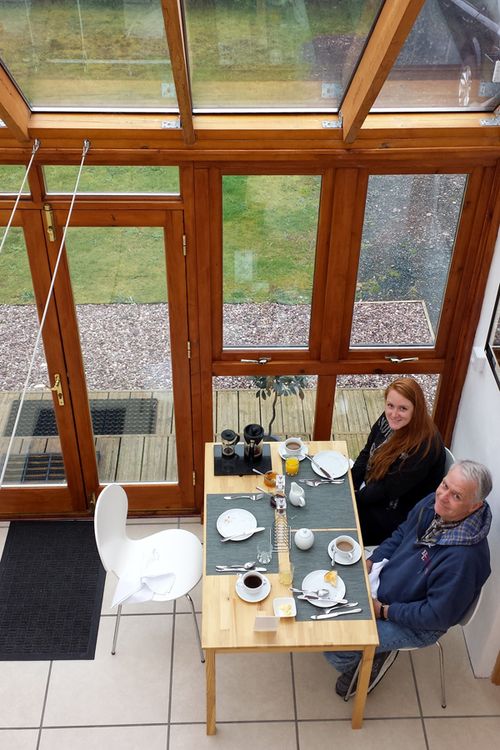 1.  On Saturday morning, I woke up at Croft 23 after the last of our 5-night stay. People, there is truth in advertising! If nothing else, just take a minute to watch the slideshow at the top of that page; minus the brilliant sunsets, the northern lights, and the sheep (they were apparently happy elsewhere last week), it was just that beautiful. Mark and Jan were our warm and welcoming hosts, and they were marvelous. Mark is an amazing landscape photographer and it's worth a "Like" on Croft 23's Facebook page just for the almost daily photo. 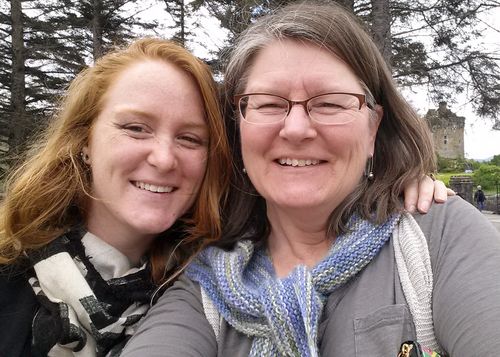 2.  Later on Saturday morning, on our way to Glasgow, we stopped at a castle to use the facilities, and also to get coffee... and a selfie. Ha. Yeah, we really did! We'd already visited Eilean Donan Castle as admission-paying tourists several days before. 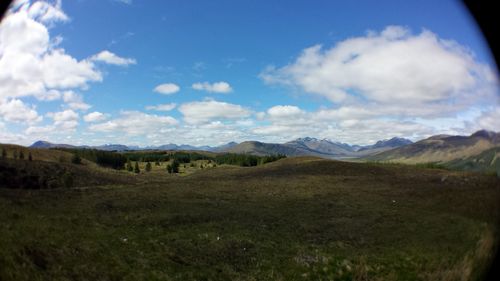 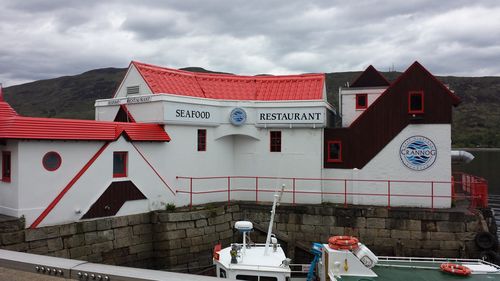 4.  We had lunch at Crannog Seafood Restaurant -- a place I've been to before!! Fort William was as far north as we'd ventured three years ago and it was on our way to Glasgow this time, so we retraced some steps. It was kind of fun to feel a bit familiar with a place. 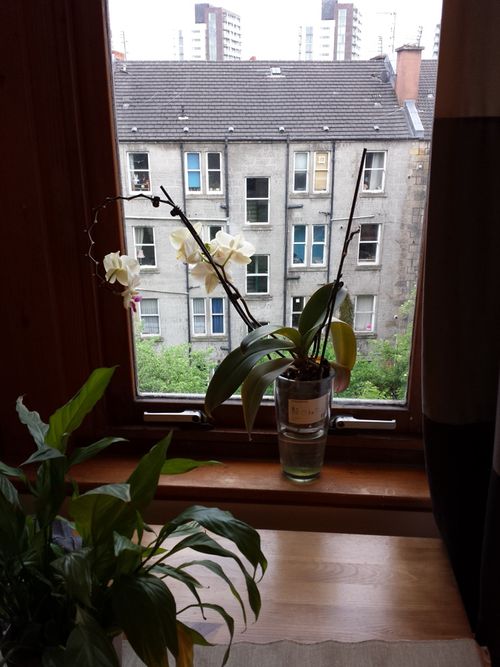 5.  We arrived in Glasgow for the first of two nights at an adorable 2-bedroom 3rd-floor walk-up in the west end that I found on airbnb. It was my first airbnb experience and it was good; the place was just as advertised, easy to find, very clean, and well appointed. Cute enough to live in! 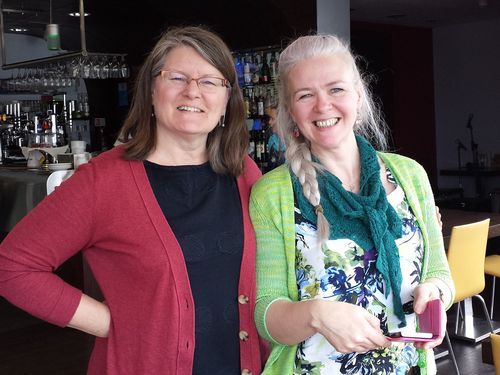 6.  On Sunday, while Rusty walked about Glasgow*, visiting galleries and museums, Katie and I drove west and met up with Yvette! I've cyber-known Yvette for years -- 10 years, to be exact (through the magic that is searching the archives, I've determined that the first time she commented on my blog was May 31, 2004!) -- and had missed her move back to Scotland from France three years ago by mere weeks. It was so fun to meet!! 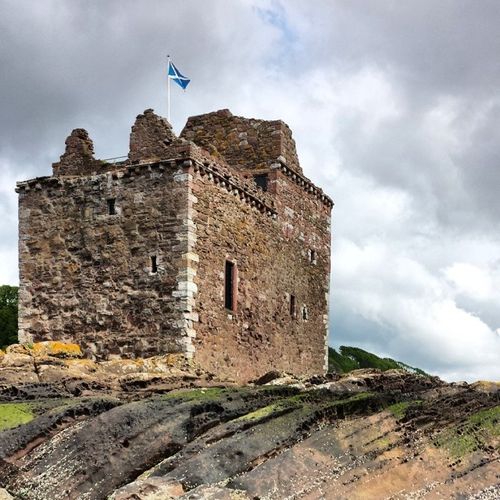 7.  We drove a bit north, again on some familiar roads, to another familiar place. We'd visited Portencross Castle at West Kilbride a couple of times three years ago. I'd scattered some of Sharon's ashes there -- because she loved Scotland and had influenced our decision to go there (instead of Ireland) -- and it didn't feel right to be so close and not visit. 8.  On Monday, we returned our rental car in Glasgow. We had one of the most uncomfortable encounters of the trip -- any trip any of us have ever been on -- when a guy from the rental company gave us a lift to the train station. He obviously didn't want anything to do with us -- because Americans? tourists? -- no greeting, no response, completely ignoring questions and attempts at conversation, or grunting a barely audible one-word response. Thankfully, it was a short drive! It was a quick train ride back to Edinburgh for our last night. 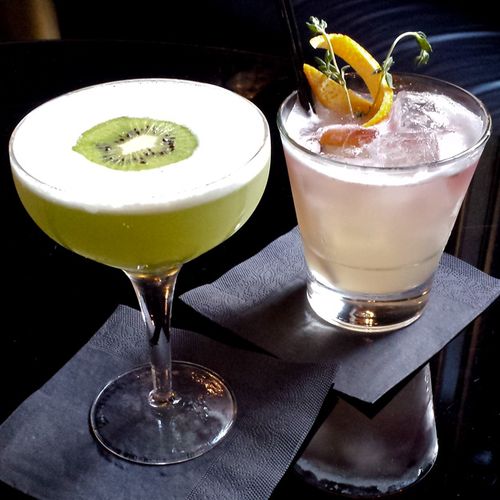 9.  It may seem strange that our last meal in Scotland was at Wannaburger -- basically American fast-food burgers, fries & shakes -- but it is what it is, and it was really good! I'm more than a little envious of the food scene in the UK, and these weren't your typical American fast-food burgers! Wannaburger is a favorite of the American students in Edinburgh -- comfort food. Anyway, we ate very well in Scotland. If Wannaburger was the worst, then it was the best worst. Heh. I feel as though I've gained 20 pounds in the past two weeks (is that possible?). Anyway, while Rusty took one last walk-about in Edinburgh after dinner, Katie took me to a fun and gorgeous place called The Voodoo Rooms, right around the corner/behind our hotel for cocktails (mine, left, is Where The Wild Things Are, and Kate's is Mother Earth). 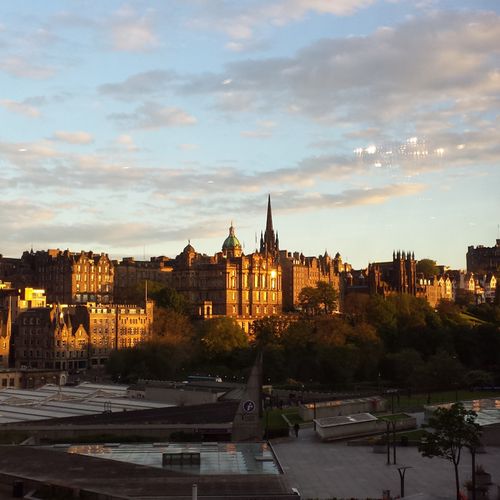 10.  Finally, having learned a little bit about whisky on this trip, we enjoyed a lovely last view from the lounge at Motel One while the sun set on our visit, capping the night with a glass of single-malt... neat (eventually adding a wee bit of water to taste).

Vacation was quite lovely. I fully intended to blog along the way, but our days were packed and connectivity limited. Don't worry, I'll fill you in!

*The Glasgow School of Art was on the list but was devastated by fire just days before our arrival in Glasgow. One of Glasgow's -- indeed, Scotland's -- great treasures, firefighters took extraordinary measures to save as much of the structure as possible, well deserving of a lovely Thank You.

Wonderful photos, as always! It looks like you had an excellent visit, and I can't wait to hear more about it!

welcome back! that last weekend looks amazing and I can't wait to see/read more about it!!

It sounds fantastic and your photos are great. I can't wait to hear more!

Missed you, but loved the dailies on FB. Every bit of your trip sounds marvelous. Your sip of whiskey with your last view is what I call heaven. :)
Looking forward to more!!

Thank you for sharing. Now I want to go (even more than I already did). In fact, I'm pretty sure I could have my bag packed tonight. The highlands! I would have kept taking pictures of them, too.

Welcome home! And I can't wait to hear more about your adventures! So much fun.

Elder Son and I toured Scotland and England back in 1995. I loved the Highlands, too! The accents were delightful.

It looks like you could have barely had more fun. When that fire at the art school came across my Twitter feed the very first thing I thought of was you and Kate, and hoped it didn't mean bad things for any of you. From what I saw, it seems like we all lost something there, but not as much as we could have without those heroic efforts to save things.