Mum
Thirty of One Hundred plus Ten

Junebug was part of the airport welcoming committee last Friday. We heard the flight arrive from Atlanta. We watched passengers wait for and claim their luggage. We heard the boarding and departure of the return flight to Atlanta. But we didn't see anyone we knew! Eventually, no one was left in the baggage claim area except for us... and 23 bags circling the carousel! All but one of those bags belonged to my sister and her family and as we unloaded the carousel, they came sauntering down the hallway with a bag of fresh cheese curds. Priorities!! 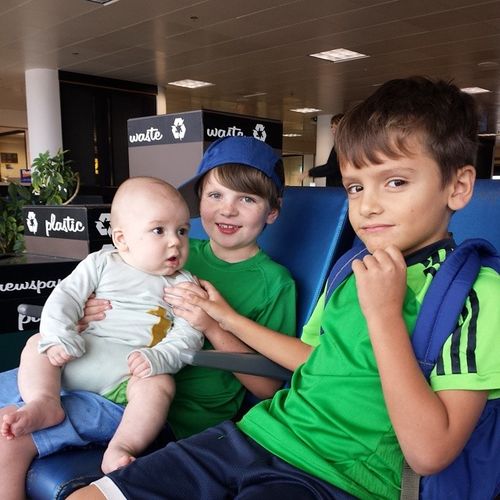 Based on experience over the past almost-week, 5 months old is the very best time to be introduced to your 9yo and almost-7yo cousins! Expressive enough to be interesting, not mobile enough to be a nuisance. The big boys just can't get enough of him! 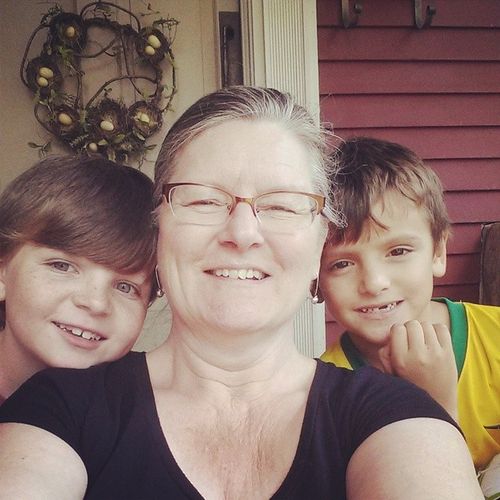 I watched the big boys for a while yesterday afternoon while their parents went shopping for a car. When they returned, I told the boys to tell them what kind of babysitter I was. They said, "The sleeping kind!" Haha. We'd been sitting on the couch and they were showing me their FIFA World Cup sticker books. I learned all about how good/bad each team was, who their best player was, and of course there were some standouts -- the best player of all, the guy who bites, and the guy most recently bitten. Heh. At some point, I'd rubbed my hand over Addy's face and he said that he liked having his face rubbed. "Well, here," I said, fluffing up some pillows, "let's get comfy." Mack got his book and we had some quiet time... and next thing I knew, I heard the boys ushering in a former neighbor lady. I don't think I slept for long, but boy I sure did sleep.

Things are getting done. At times, Monday morning seems as though it was months ago already. At other times, the sadness is undeniably fresh.

thinking of you my friend. Keep those boys close, they are the best kind of medicine!

Love you my friend! Seriously - all those bboys will make you smile when you least expect it and most need it! <3

Your family is the best distraction there is. Sending all kinds of love your way.

I wish I had those guys here to explain it all to me! Sara's getting tired of all my questions! but so glad you have time filled with good things. Hugs!

Spending time with your nephews and grandson is the perfect antidote to your grief, I'm thinking. Be patient with yourself these days.

As I've been seeing your postings over the last 7-10 days, I did think how wonderful it was that your sister & family were back. When I first saw the pic of the boys I thought it was a perfect reminder of generations weaving together. Those adorable distractions are the perfect thing for these days!