The weekend
I have nothing

My sky is gray today, in the le drear way.

Sometimes, though, a gray sky can be one of the best things ever... adding to the moody beauty of the Scottish Highlands, say.

This is from a viewpoint as the A832 descends into Kinlochewe, overlooking Loch Maree -- one of the most beautiful views I've ever seen. 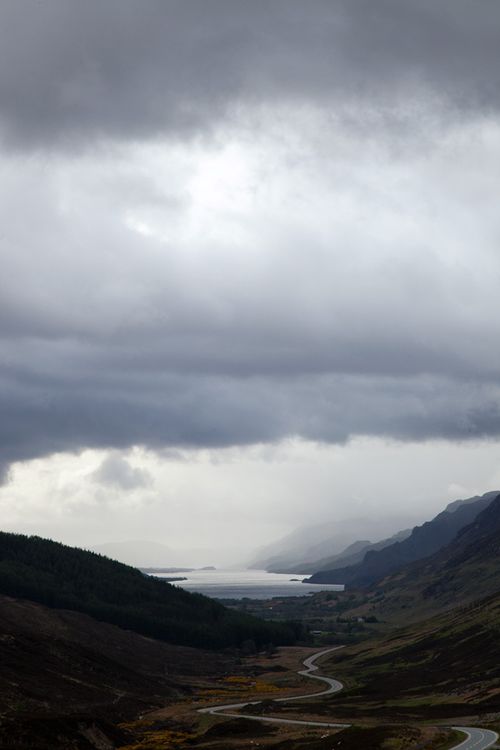 We stopped at that overlook a couple of times while we were in the area. One time, we'd just got out of the car when another zoomed in, came to a fast stop, and four young guys jumped out, practically unzipping their flies as they did! "Pardon us," they said, "we really need to wee!" Or something to that effect. It was so funny, made even funnier when we met eyes with one of the lads and there was instant recognition -- he'd been our waiter at a restaurant in Gairloch the day before! They quickly did what they came to do (not stopping to admire the view!), then jumped back into their car and zoomed off!

You can see this view featured a couple of times in the beginning of this ad for David Beckham's Haig Club Scotch Whisky. (Make it BIG!)

Gorgeous view and funny tale to go with it! Lol.

Now that is my kind of landscape! Gorgeous, and all the shades of misty gray really add to it (as does the funny wee story).

Oh my, I just LOL at that story. That young lad must have been hoping that you wouldn't be coming back to the restaurant soon. As always, a lovely photo, too.

what a great story! and a marvelous view...but now it's not even 6am and I'm thinking about scotch?!

What a gorgeous view to have while taking a wee!

A view with a tale! The view is one that would stay in your memories with or without a story. I love your tales and photos of Scotland.