We entered the kitchen at 8:30 a.m. and didn't leave until a bit past 5:00. We measured, mixed, stirred, chopped, patted, poured, rolled, sprinkled and baked our little hearts out with varying success... mostly great! 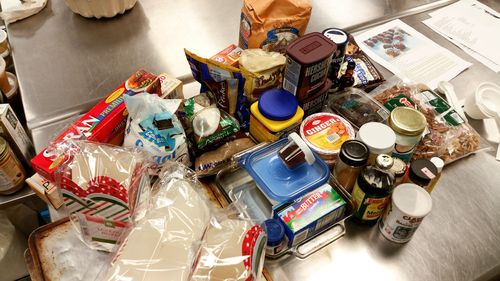 There were three large stainless steel work tables pushed together in the main work area and it worked perfectly for each of us to claim one as our own. There was plenty of room to spread elsewhere, and a couple of us also employed rolling carts. That's everything I brought to make the following: 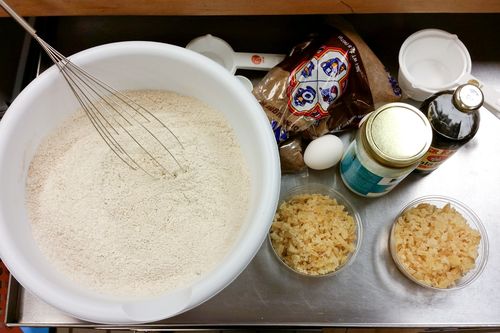 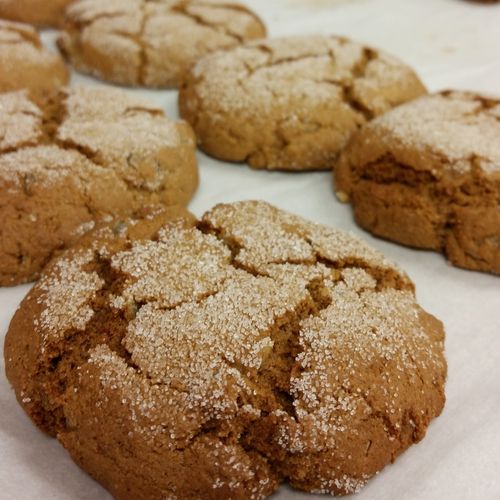 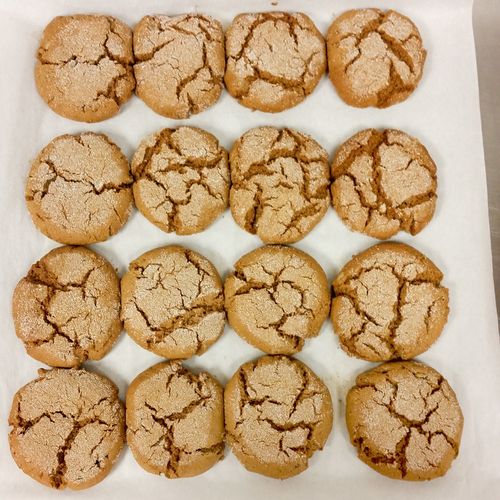 Each batch is supposed to make 16 cookies, and I ended up with 29. An unequivocal success, I will definitely make these again... maybe next week! Next time, though, I'll keep in mind that a double batch pushed the tilt-head KitchenAid mixer to the limit. There was a big Hobart commercial mixer available, but total overkill. I think that my bowl-lift mixer at home is just a bit larger than the tilt-head.

Paleo Fat Bomb Coconut Brownies by Caitlin Weeks. They are delicious! I used both the coconut and walnuts, but was just a little shy of the 1 cup of melted coconut oil called for in the recipe -- my fault -- so they look dry and are a little but crumbly, yet, at the same time, are also incredibly moist. I think the missing oil would help hold it all together. I would make them again, but also maybe cut them into the suggested 9 squares, rather than 16. 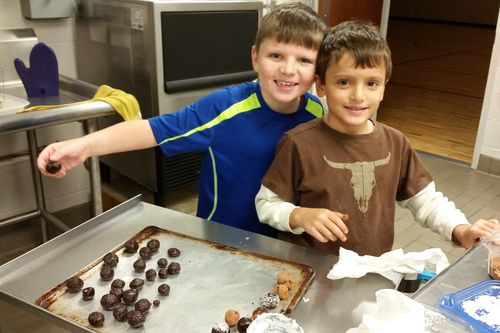 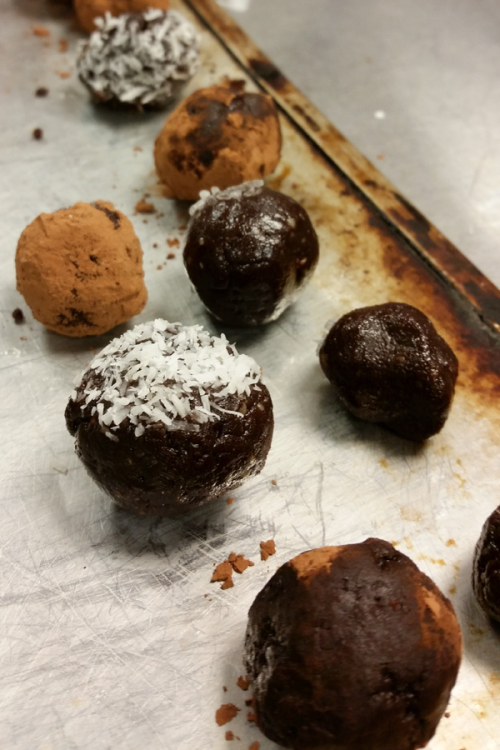 I may have processed a bit longer than needed -- I don't have much experience with food processors! My able assistants helped with both rolling and garnishing, resulting in a wide range of sizes... from rabbit poop/Cocoa Puff size to shooter. I was a little distracted, and they were so happily rolling and dusting and dipping, that I just let it roll. So, they look a little wonky but they taste great! Kids love to help in the kitchen!! 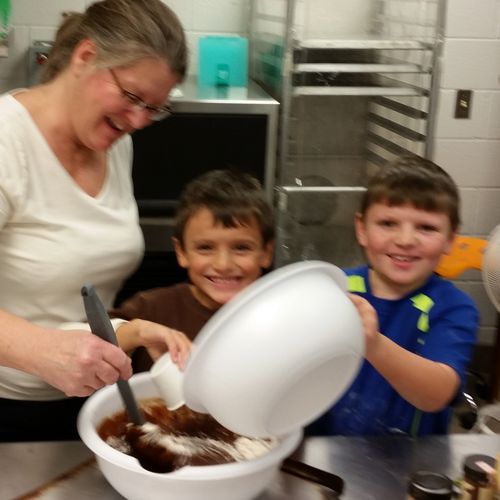 My helpers were not only handy, but very happy, too!! These brownies looked quite different than what I was expecting. From the photo that accompanied the recipe, I was expecting a very rich, dark brownie, but they are not that at all. Variation in cocoa used? Perhaps. It made a lot, and they taste good even if not quite as chocolatey and chewy as I thought they'd be. 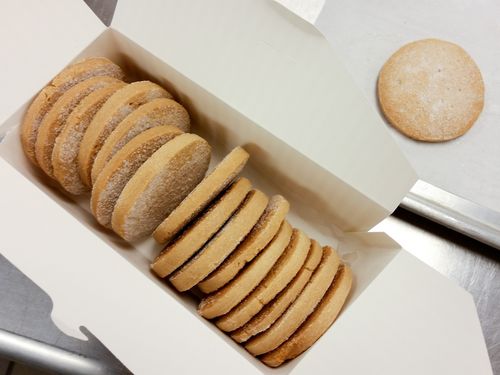 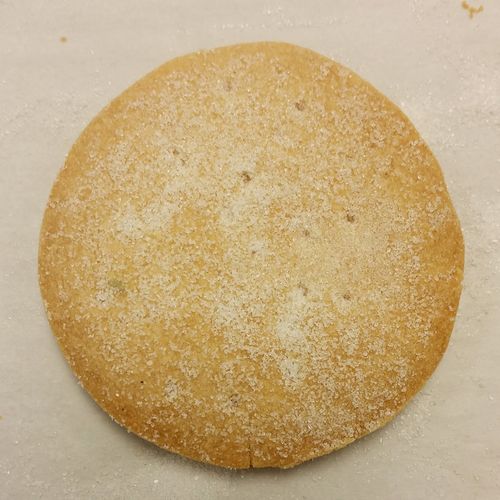 I almost didn't make them... there's a lot of intermittent refrigeration in this recipe. Pat the dough and refrigerate; roll the dough and refrigerate; refrigerate, refrigerate, refrigerate. I was pretty exhausted by that point, and I may have skipped a couple of those steps at the end. Rolling to an even thickness has never been my forte, either, and we'll just say these are all 1/4" thick, more or less. I was able to get two pans, mostly full, into the oven and they turned out wonderfully! I didn't get anywhere near the quantity the recipe says, but these are 3" cookies, at least, rather than 2" -- I had to use cutters at-hand -- along with the aforementioned challenge with consistent rolling. But I think I'd make them exactly the same next time!

My intention was that most of this would be gifts, and I might have been more successful with some if I hadn't had to pack and travel. The cookies were by far the most successful in that department -- and all-around -- they're truly my favorites of the day!

New rule for food gifts: nothing that needs to be cut. And think twice about frosting/glaze, too. Also, packaging. Those fudge bombs would look good, four or six in a small box; just sprinkled in amongst other goodies, they just look like... not good.

What a great day, though. There were two large convection ovens at our disposal, a gas range and another oven, a walk-in freezer, large refrigerator, mixers and food processors, three sinks, plenty of work space. We love to do, and this is something we'll definitely do again!

I love that you got to use this space together! Even though it was work it must have felt like FUN!

The cookies look spectacular and the day sounds like a blast. Spending time with your sisters and nephews must have been fantastic with the cookies being a bonus!

I am getting tired just reading this. Wow, what an effort!

It all looks yummy.

Our baking day is Christmas Eve. I hope we have the success you did!

I would happily munch on any of those glorious treats! FYI - a walk-in freezer can be an excellent sub for refrigerating things when you are short on time. If it is set properly, it would cut your time for 'chilling' in half, maybe more depending on what you're chilling. Home freezer does it too, just not as dramatically due to lack of air movement.

What FUN! That sounds like the best way to git 'r dun!!!

I think the rented kitchen is a fabulous idea! and I LOVED how my Instagram feed blew up with cookies this past weekend - yours look delicious (and fun)!