Ten on Tuesday:  10 (or so) Things for Our Christmas Letter

Seasons Greetings to Our Family & Friends!!

Since I last wrote, the girls have all graduated from high school!  ;)  Yep. I'm not quite sure how long it's been since I've written, but it's been quite a while... 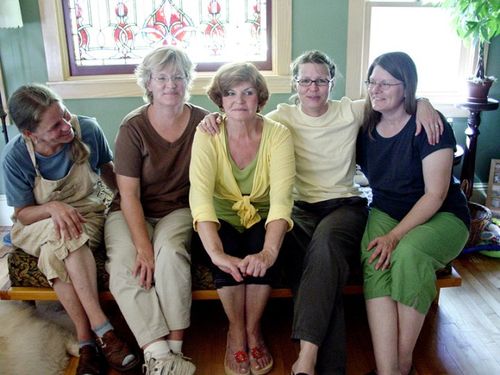 Bad news first. My mother died on June 23rd. She was diagnosed with cancer in late 2012, and received her first treatment on New Year's Eve that year. She was admitted to the hospital in early June with pneumonia, partly the result of complications from side effects of a new chemo and partly the result of permanent damage from previous radiation treatment. Her condition deteriorated over a few weeks, and she died just days after Ann and family returned to Wisconsin from Brazil. We celebrated the life of our beautiful mother, grandmother, sister, aunt, and wife at a memorial in August. 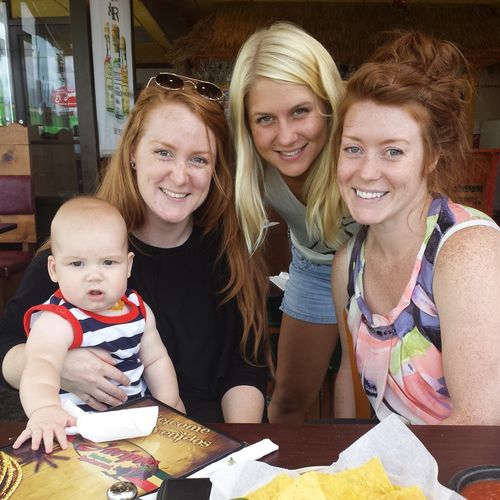 The girls. Katie returned to Wisconsin in August after spending a year in Scotland where she earned her MSc in the History of Art, Theory & Display from the Edinburgh College of Art at the University of Edinburgh. She has happily returned to work at the book store while also completing an entrepreneurship program, developing a new business, and writing an art blog at Young-Space.com.

Ali married Rod last year, making us first-time in-laws, and became a mother this year, making us first-time grandparents! Our grandson, Junah, is an absolute delight. It'll be six years in February since Ali took over operations of the coffee shop! The shop continues to succeed and grow, thanks to a wonderful team, and they are looking toward an expansion opportunity.

Maddy worked another summer at Girl Scout camp, this time as trip leader, the highlight being a 2+ week canoe trip in the Boundary Waters (with maybe an accidental overnight on the Canadian side). She got her kayak wet as often as she could, found a new job, moved into a lovely old house with her roommates, and is getting ever closer to earning her elementary teaching degree. It won't be long now!

Us. Rusty successfully funded a Kickstarter campaign and published a book about the imaginary places he's painted for years. He participated in some local art fairs, and spent a few weeks in Grand Rapids, MI, at Artprize, closely followed by another few weeks on the west coast. He traveled from Wisconsin to British Columbia to SoCal and back, visiting friends, family and clients, and getting the coastal recharge that's so necessary to his survival. He continues, of course, to paint, draw, read, write, and teach; he's currently working on the illustrations for a Storey Publishing "tiny houses" book.

Becoming a grandmother for the first time was the biggest highlight of my year! It's true... everything they say about how great it is to be a grandparent.

I began hand sewing, making a couple of bibs for Junah in addition to a onesie, a blanket, a top for Maddy, and a couple of tops for me. I have plans (and patterns, fabric & thread) to do much more! Sewing cut into the knitting time, but I still managed to finish a few shawls, some hats, and a number of Christmas gifts, and have started a long-term blanket project that joins an already impressive list of WIPs (works in progress).

I did very little dyeing this year, but I did do some! I was inspired after taking workshop in Grand Rapids about naturally dyeing fabric; harvested some stuffs from my own back yard and had a go with some yarn. I'm excited to do more! (There's an indigo vat in my future.) I still keep a small area within Ali's coffee shop to sell a little yarn and other supplies.

Rusty & I went to Scotland in May, flying into Edinburgh to meet Kate and then heading to the Highlands for the majority of our visit. We traveled by train to Inverness where we rented a car, and Katie chauffeured us around! From Inverness along Loch Ness to Urquhart Castle, up to Dornie and Eilean Donan Castle, through the Torridon to Croft 23, our gorgeous B&B at South Erradale in Wester Ross; over to Dunrobin Castle at Golspie; Gairloch, Poolewe, Aultbea, Kinlochewe, Ullapool; over to the Isle of Skye; revisiting Fort William and Glencoe on our way to Glasgow; over to North Ayrshire and a visit with my friend Yvette at Irvine, to Portencross Castle at West Kilbride. We then took the train back to Edinburgh from Glasgow before heading back home. That was a lot of driving! Most of it on single-track roads, sometimes dodging sheep. Though the weather was less than spectacular, it was an amazing vacation nonetheless.

I also traveled to Los Angeles with my sister Ann in July for a long weekend -- and her friend's wedding. It was a nice, touristy break: Hello Hollywood! I enjoyed my first farm-to-table dinner in August, as well as my first Milwaukee Brewers game at Miller Park. Kate, Ann and I participated in the 25-mile version of the Peninsula Century bike ride in September. There were trips to Chicago, Grand Rapids, and a wonderful family weekend at our old family cabin on the Turtle Flambeau Flowage.

We experienced the highs and lows of life to extremes this year, and hope for a little moderation in the next.

Happy Holidays & Best Wishes to All!

The cosmic shift of losing your mom is certainly the biggest change of your year but you've had a lot of good things, too, and I know you will focus on them as much as you're able.

highs and lows... lately I've cried about both reading your posts. 2014 was a blend of both and I'm wishing you more highs than lows this next year. all the best my friend, M.

It's been a very emotional year for you, from the highest of highs to the lowest of lows. There is so much joy in the telling of the highs and my wish for you in 2015 is for more joy and more love!

What a year! You've covered the gamut, my friend. XOXO (And now, your Christmas letter is complete. You really ought send it -- it's perfect, and your friends would appreciate every word.)

Merry Christmas, Vicki! You inspire me to complete my Christmas card summary.... Now, where are the stamps???

All the best to your family in 2015, Vicki. I hope your holidays (and your life, for that matter) are full of wonderful moments, laughter through tears, and love.

Life sends so many things our way doesn't it? So many, many good things there though. Here's to a beautifully peaceful and family filled 2015 Vicki!