I had a little time to kill before meeting everyone for Joe's birthday dinner, so popped over to my bike shop to take advantage of The Great Rack Upgrade. The offer (thru 3/31) is to trade in your old bike rack (any make/model) and get 20% off a new Saris rack. I've had a 3-bike Saris rack and it's been mostly okay, but we've occasionally had issues with fitting our different bike styles -- jostling handlebars, mostly. The new one has an arc design and I'm hoping it'll be a bit easier. 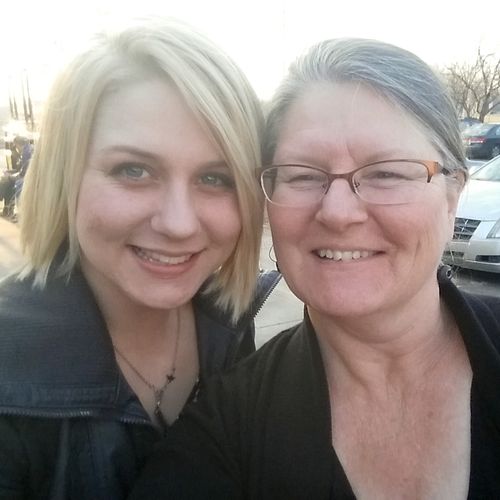 Maddy was the first to arrive and I thought to take a selfie with her -- I have a few of us but they're not that great. 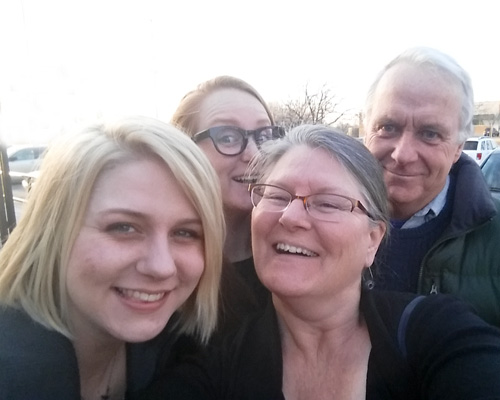 Some people tried to photo-bomb us but, you know, selfie... we saw them coming!

Auspicious? Suspicious? I'd originally made reservations for 17, but after some last-minute cancellations, we ended up with 13 on the 13th! We had a great time, though no one had a match or lighter so Joe had to pretend to blow out the candle on his little cake. Haha. 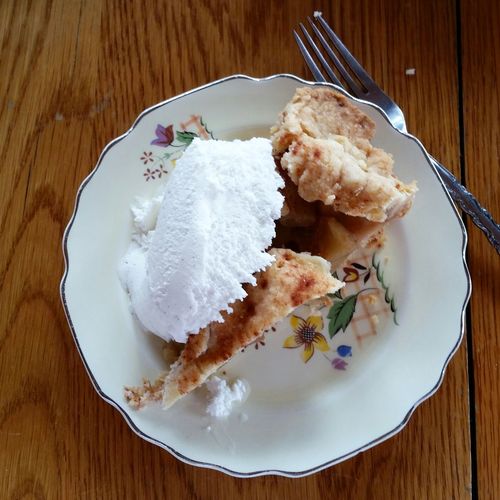 Saturday was Pi Day and luckily we had some pie handy! We started our day with pie for breakfast dessert. 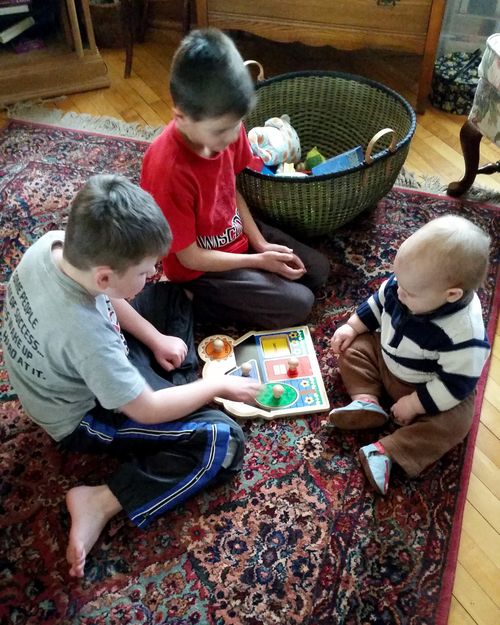 Annie and the boys came over for a while, and so did Junah! 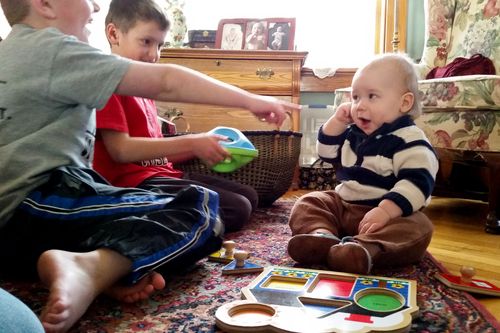 He's holding one of those little shapes from the puzzle up to his ear and "talking." The boys thought it was hilarious! They love him so much and think he's cool... I just love that.

The weather was mild, so the boys were in and out, and they also kept tabs on some college basketball games, especially the Wisconsin-Purdue game.

Annie and I got the fixings for Traditional Boiled Dinner on Saturday. My dutch oven wasn't big enough to accommodate the corned beef and the veggies, so I did the veggies in a different pot. The only pot that would be big enough is dedicated to dyeing!

And I got that dye pot out on Sunday for some coloring up -- and re-coloring -- of yarn! I am so pleased with the over-dye job for Sophie's Rose... the original color was great, but it needed just a little muddying; I've had more than a couple false starts, but I think that project is finally going to sing! The other colors were a range of blues, and then somehow a couple of corals!

I knew that the Badgers had a big game on Sunday afternoon, so tuned it at about half-time... the score was very close. At one point -- when Bucky was down 11 points (only the second time all season there was a deficit that big) -- I thought I'd jinxed it all but thankfully they brought it back to tie! And then they won in overtime -- the Big 10 Championship! So now, of course, I have March Madness fever and have even made my bracket picks. Anyone interested in a knitters' tourney?

It was a good weekend.

Thanks for all the great feedback about the new blog design! I'm pleased that the cleaner look makes it easier to read. (Still tweaking: I've made the post type a little larger.) I love that some mentioned the inclusion of my old banner into the new! For a while, I changed my banner monthly, but once Parcheesi landed up there, I just couldn't bear to change it; that was some epic get-me-through knitting, and it's one of my favorite and most-used pieces.

Your weekend sounds like a perfect mix of fun stuff and fun people!

Keep the Parcheesi!!! Forever! It is one of my very favorite afghans.

I just love that photo of Junah sitting there with the "big boys!" His little feet . . . his antics . . . and his admiring eyes for the boys. He has stolen my heart! What a lovely weekend, Vicki!

Junah's hair is getting long! I love the blog more after your tweaking! I may be contacting you to help me through my own ch-ch-changes. I've been DYING to do it for a year! (I'm a scaredy pants)

I agree about the blog change...cleaner, loads faster (and the bigger type is good for my aging eyes - LOL)...thank goodness your content is the same!!! I Love it! :) Have a great week!

what a great weekend - love all the family time (and photos...and food)! Junah's looking like a little boy now - real pants and a shirt...and shoes! glad he's got cousins close by to adore him. hope Monday's treated you well! - M.

I was one of those glad to see Parcheesi hadn't departed from your banner. And we are boycotting the Dance since they ridiculously snubbed my alma mater for several lesser teams. OK, I never watch because I don't care for basketball, but I can support my school anyway. ;^)

Great post! I'm doing my brackets as we "speak".

As a Spartan that game made me cry.

Glad to see you went with a Big 10 team for the No. 1 pick! Go Badgers! (Though I was rooting for Sparty on Sunday! I'll be pulling for MSU---and all the Big 10 teams---in the tournament, but I know the Spartans will only give me more grey hairs!)