This is how you start a great week 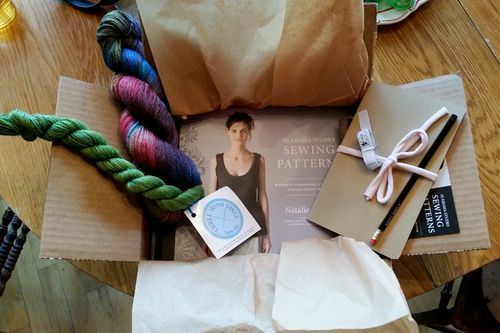 Yesterday, I came home to find my birthday present from Rusty... exactly 5 months to-the-day later!! Pre-ordered back in late October, I have been patiently awaiting -- and recently stalking via USPS Tracking -- the arrival of Alabama Studio Sewing Patterns

Natalie Chanin will be giving a lecture + book signing later this month at the School of the Art Institute in Chicago and I've been trying to figure out a way to go! At 6 p.m. on a Tuesday night, it pretty much means an extra day off of work and an overnighter. So tempted...

Also in yesterday's mail was my first-ever order from Three Irish Girls -- I fell hard last month for A Hundred Thousand Welcomes. No plan yet. 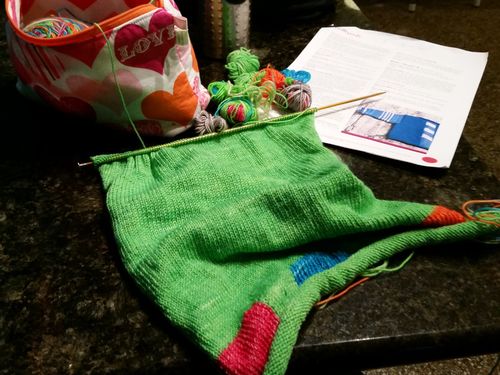 I was at the coffee shop this morning, as I am every morning, when my phone rang. The upshot of that call is that I had an extra hour before needing to be at work, so I took a seat at the back and had a nice hour of knitting and listening to the hubbub. The mostly all-male kaffeklatsch/welcoming committee that occupies the front everyday had a lot to say to each other about basketball this morning! And, indeed, it's a bittersweet morning. The Wisconsin Badgers didn't win the NCAA title this year, but they had an amazing run and even I (not a basketball fan) have been riveted by them during March Madness.

I enjoyed the basketball game and I have never before watch the NCAA games. It felt an affinity to the boys in red because of you. Your intarsia is looking great. I can't wait to see what you're making for that cute boy. I had some fun reading my new AC book last night. I can't bring myself to open the notebook or sharpen the pencil. It's such a dear package!

Hooray for great things in the mail!

So excited about The Book (but you already know that!). Sorry about the basketball outcome; they were pretty darn awesome and made for an exciting March Madness! (I am All About that wrap skirt. Want. It. Now.)

Sorry about the Badgers! I like watching Kaminsky play.

How wonderful that you have all these things to be excited for!

I vote you go to Chicago. Life is short. Creative infusions can be hard to come by.

I was rooting for Wisconsin, too (but don't tell Marc...he's ACC all the way!) Hope the rest of your week is living up to Monday's promise!

So sorry about the loss! It was a great run. Happy Wednesday!