Ten on Tuesday:  10 Things I Love About My Home

We've lived in our home for over 28 years! There are things that I've loved from the beginning (that basically sold the home to me); things that we've improved so that some other feeling has now become love; and there are many things that we just outright created, helping to make our house a home that we truly love. 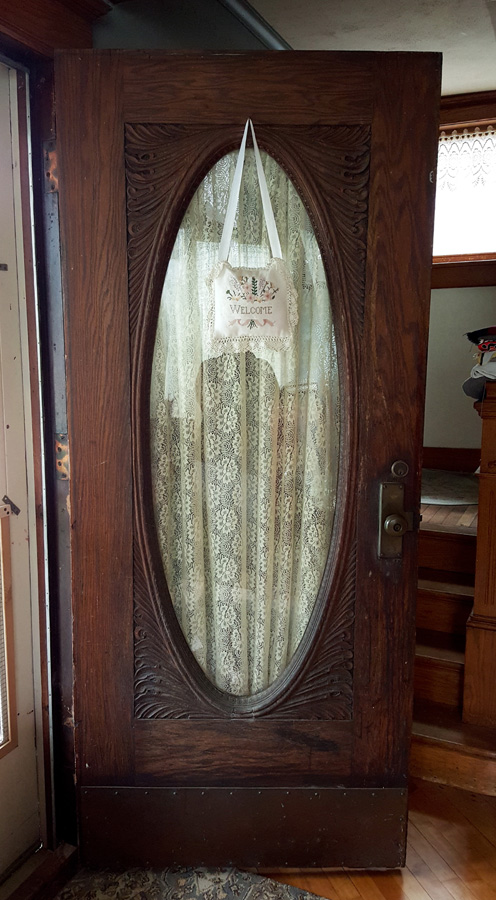 1. The front door. I didn't have to do much more than step through that door 28 years ago, take it in along with the oak staircase and the colonnade between the two main living areas on the main floor, and I was in deep, deep love. 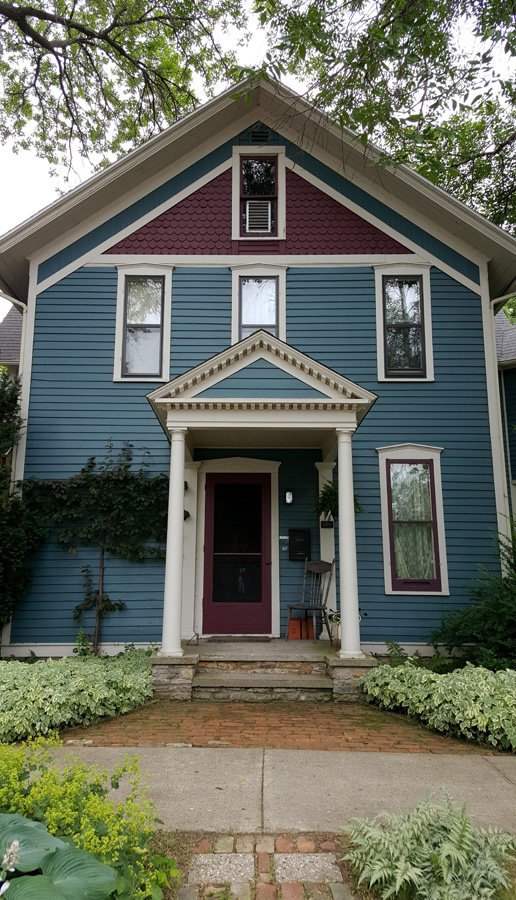 2. The colors. It's sided with wood clapboards and shingles, so there's a lot of upkeep and maintenance, but I sure do love it. The house was light blue with white trim when we bought it, and there were black shutters on all of those windows.

3. New windows! Not all of them... Most of the windows are original with wooden storms/screens that we remove and replace with the seasons (but not all of those, either). There were only a few windows in the house that  had "modern" combination storm windows when we moved in and they were all replaced with new last week. (The three 2nd-story windows in the photo above, among them; they're a different color than the painted ones, but I'm okay with it.) 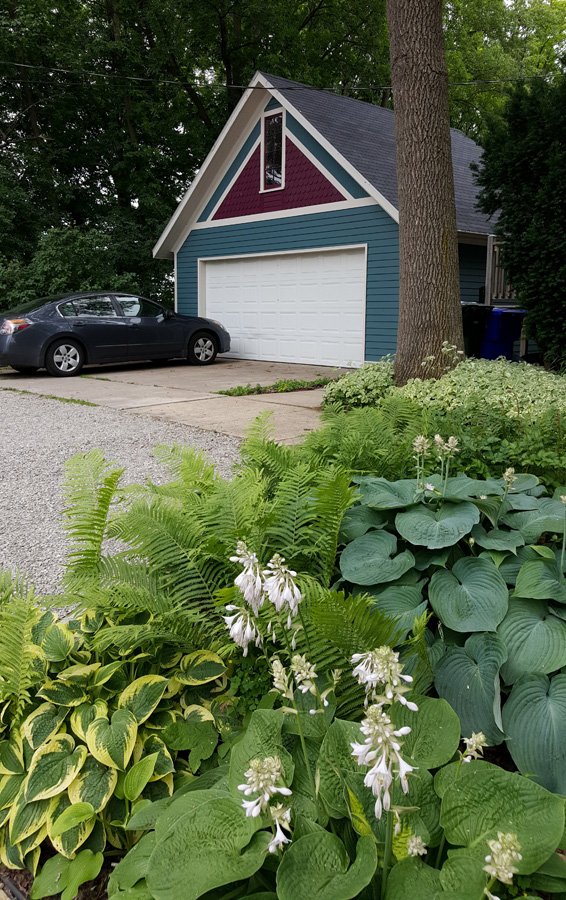 4. The garage & driveway. We built the garage from scratch and designed it to match the architecture of the house. We didn't have a driveway or a garage for about the first 10 years we were here.

And sitting on that driveway is my car, on which I made the last payment today! I've already spent a little bundle on some repairs, rather than buying new... fingers crossed that it was the right decision! (No car payment... YAY!)

5. The gardens! Once upon a time, the gardening got a lot more attention around here. The beauty of perennials is that they keep on giving. I learned to love hostas, and one of my favorites is the enormous Blue Angel (on the right in the photo above) (there used to be two, until the gas company dug up half the terrace). 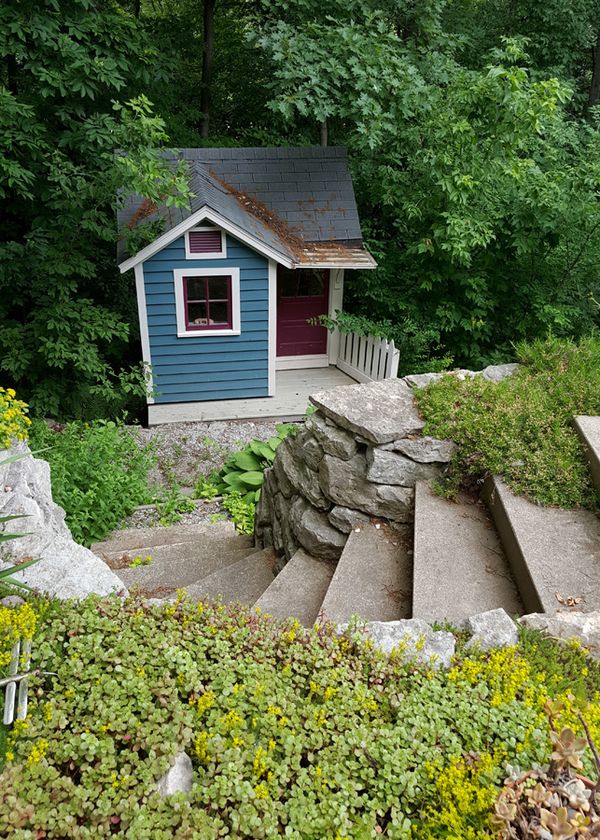 6. The playhouse. Rusty built it when Kate & Al were little, and we moved it down the hill when we decided to build the garage. Junah's been in there already this summer, but he'll use it much more over the next few. 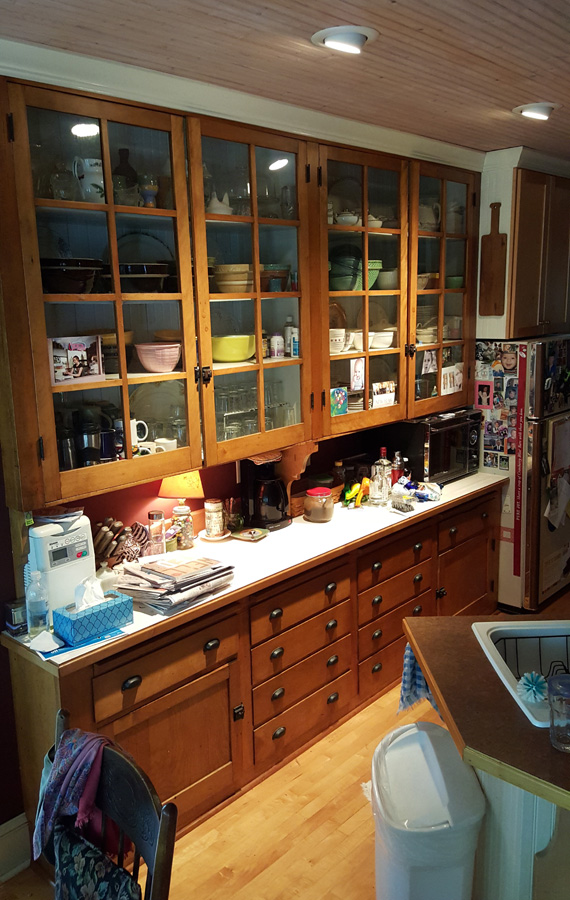 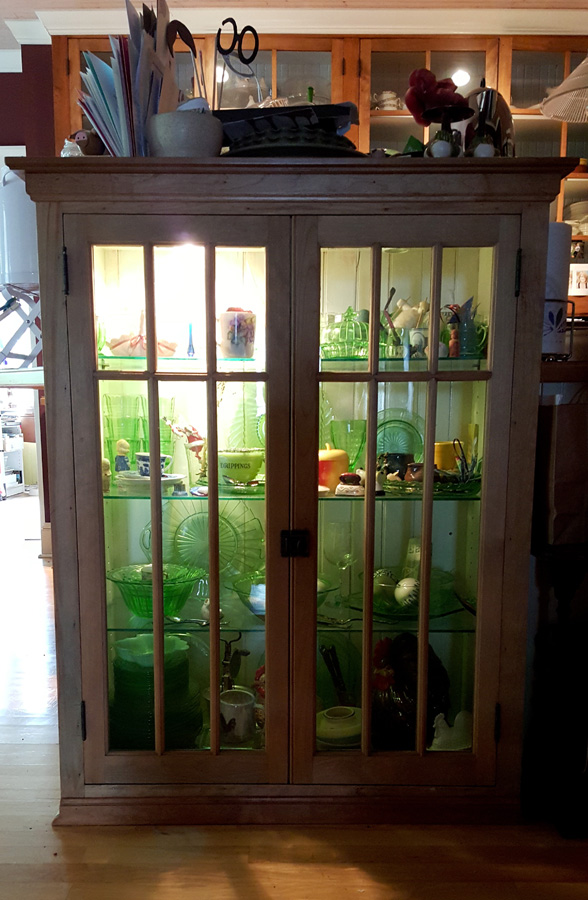 7. Our kitchen. One of the things I love most are the reclaimed cupboards. The big one once did duty in the science department of a nearby high school. We had enough height to lift the top off of the base and hang it, leaving room for a counter atop the base. The base has a few drawers, as you can see, as well as four pull-out cutting boards; we use the lower cupboards to hold recycling bins. The smaller one, my "depression glass cupboard" (with one light out) helps to block the view of the sink area from the front door (it's a straight shot!). (I'd like to replace those hot halogen lights with some LED tape.)

8. The hardwood floors. Some are new (-ish), some were uncovered and refinished, and some were always here; there's only one room in the house that is carpeted, and that's our bedroom. 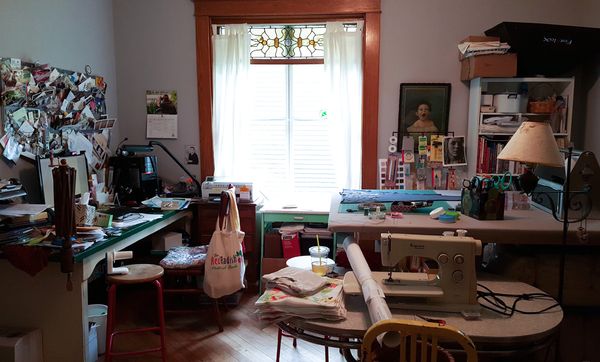 9. My workroom. It's an organized mess... which is what happens when multiple projects are underway! The paper tube set across the sewing machine are a couple more Alabama Chanin patterns that I just picked up from the blueprint shop (the least expensive place I've found to have large-format prints made... cheap, really... I email the files and pick them up when ready... SO EASY). But I digress (about Alabama Chanin  stuff... what a surprise.) 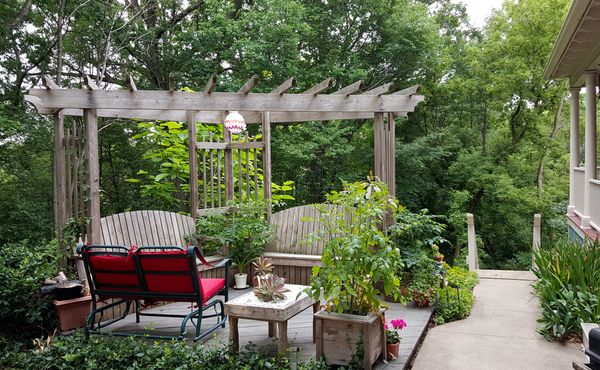 10. The deck and pergola. It's very private and I love it! I agree with Katie, though, I think it's time to grow something on it... wisteria? 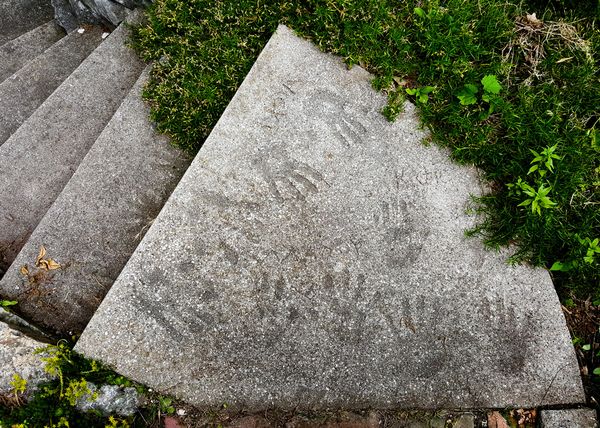 Bonus: The top step leading to the playhouse. Maddy was one and "squished" her little fingers into the concrete!

And I'm not the only one.

Your house is lovely! Be careful about the wisteria though; it's a pretty plant and smells wonderful but the bees love it too. Maybe a long flowering clematis?

I love the character and charm of your house, Vicki!

I so love your house, Vicki! (And . . . that door would have completely done it for me!) I adore the sweet little playhouse. So much. Everything looks wonderful and inviting and warm. :-)

PS -- Congrats on the no-more-car-payment thing! That's a wonderful feeling.

Your house is so inviting and I would love hanging out in your kitchen just to look through all the glorious cupboards. How fun to know they were repurposed from the high school! AND, of course, how cool would it be to have a workroom that big and useful? You have created a wonderful home.
You'll love not having a car payment. I've never spent as much on repairs as I would payments (but then, you know what my car looks like):)

My heart went pitter-pat when I saw your front door, and I really, REALLY love your science dept. kitchen cupboards. What a wonderful home you've created!

That front door is something else! I love your home -- so many lovely features and things you've done with it.

you have a lovely home...and I can tell it's full of love! you have a real talent for blending old and new and making it all look perfect together! (p.s. I'm glad this prompt was in the summer - I love all the green outside!)

I love your home especially the color choices outside. Living here in very dry and brown California your gardens are so lush and green that it's almost hard to believe.

Love your home! I could be so happy there! Haha. It's almost impossible to have a charming older home here in SF Bay Area unless one can pay upwards of 1.5 mil! That's why I live in a modest town home, but we've completely changed the inside over the last 26 years so that we can pretend when we are inside that we have one like yours! It's kinda like "love the one you're with". Thanks for sharing. Love all the pics and the garden is especially beautiful.

That kitchen is awesome! We share some of the same bowls. Here's to another 28 years!

From the snippets of your home that you've shared over the years, these are just the sorts of things that I would "expect" to see - so charming, Vicki! Love the depression glass! My parents have an antique English china cabinet (on dainty legs that have survived all the cross country moves) filled with the pink glass that they began collecting as newlyweds - when they started dating, they discovered that they had "matching" cookie jars from the color, and so it began. We have a green cookie jar too that I keep meaning to bring back with me - it's on the bookshelf in my room in GA.