Vacations at the lake

None of us ever tired of the vacations at the lake. In fact, even as I write this, 68 years after my first visit to Bear Lake, we are having a family reunion at the Turtle Flambeau (Flowage) this September weekend in 1999. All of our six kids and their families including our 9 grandchildren and 9 great grandchildren will be there.

The early vacations at Bear Lake were just one week, and usually our reservation was in June when the fishing was good. The big 2-story log cabin 29 miles from the nearest town was well furnished and comfortable. This was at the end of the road and there were no neighbors around the lake then. So it was quiet and isolated.

In those early years, electricity had not yet reached that far and that presented a refrigeration problem. Grandpa Blum and Uncle Paul tried various ideas to generate power. Because it was not always successful, we packed accordingly and pioneered it for a week with canned goods and a crate of live chickens for fresh meat!

Our packing list for just one week was enough to fill a trailer -- especially the years when we needed diapers (no disposables then).

excerpted from my grandmother's 2001 memoir, "A Look Back" 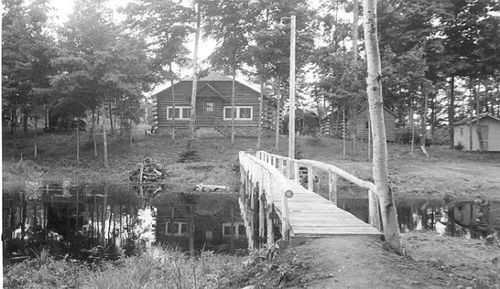 The Blum Cabin at the Flowage viewed from the island

It's June 1st and I've been thinking of my grandparents. June was their month at the cabin! We would usually visit sometime in June, too. 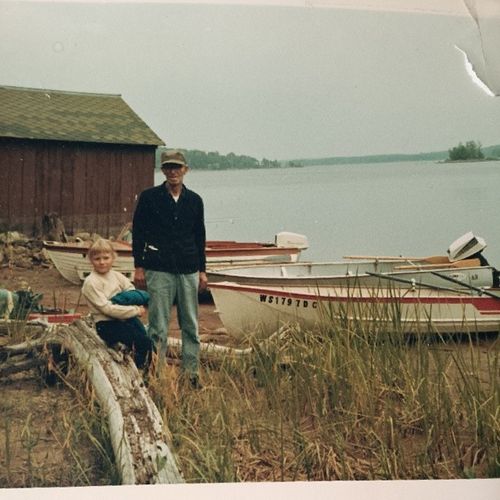 Oh Vicki! What a treasure your grandmother's memoir must be! I love that you are sharing her memories and adding your on. Can't wait for the rest!

Thank you for sharing your family's story. You have a lovely heritage and I can't wait to hear more. How wonderful to have written word. I know I treasure the words of the past that are in my possession.

What a lovely and northwoodsy heritage!

I started reading this and thought it was you......and you were 68+ years old and I thought, 'How can that be!' Then, as I continued reading, I realized it was your grandmother's memoir. How fabulous and what a treasure to have. My goodness - I know what it is like to be without electricity since that happened last month to me but to take a crate of live chickens to have for fresh meat??? That is pretty incredible!

What beautiful memories! Thanks for sharing a bit of your family with us. :)

Oh, COOL! The only grandmother (aka DragonLady) I knew . . . didn't share stories AT ALL, let alone in a memoir. She was tight-lipped and secretive. (And not very nice, actually.) So I'll look forward to living vicariously through your grandmother's memoir!