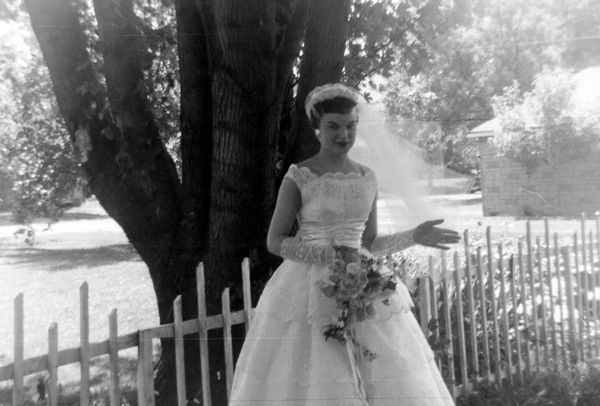 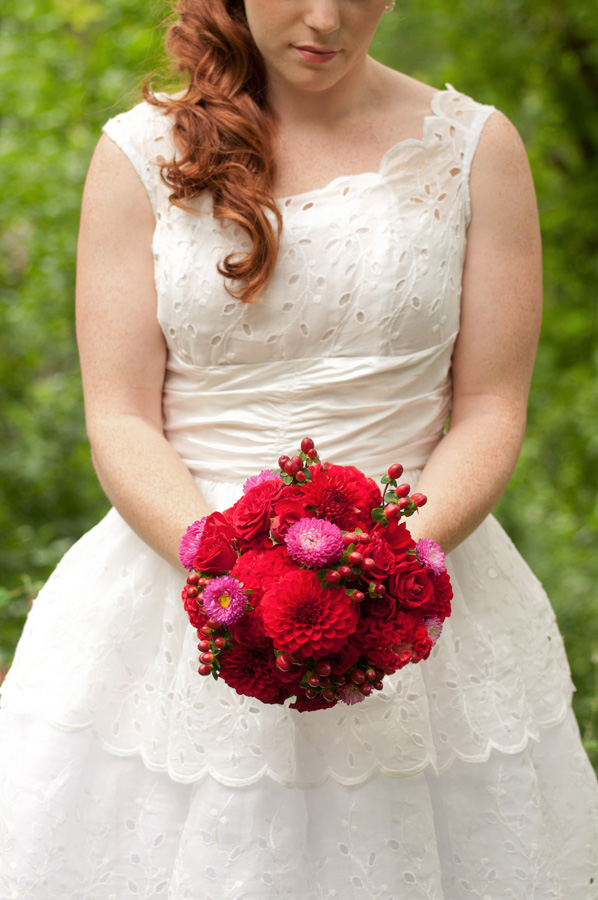 Somehow, against all odds, my mother's wedding dress survived 55 years (far longer than the marriage, which only lasted 12) to be worn again by my daughter when she got married a little over two years ago. 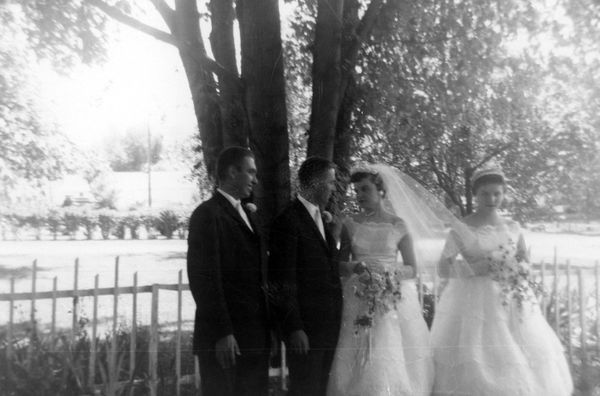 My Aunt Carol was maid of honor and her dress was the same as Mom's with the exception of the sash, which was light blue instead of white. 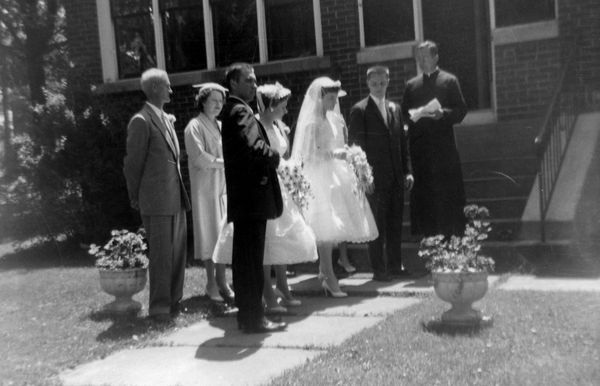 The veil did not survive to be worn again, nor did those lovely gauntlets (or my aunt's dress)!

The dress was never "preserved" or even particularly cared for over the years. My sisters and I used it for dress up, as did my daughters; and I had it displayed (collecting dust) on a wicker dress form in my bedroom for several years.

It was in dire need of cleaning, as well as some repairs! It was just about three years ago that I put out a call to friends for a recommendation on cleaning and altering, and we ended up at Art Imig's in Sheboygan. Mom came along on that trip, and maybe the second; after that she was too sick or tired or stressed out from radiation and/or chemo. 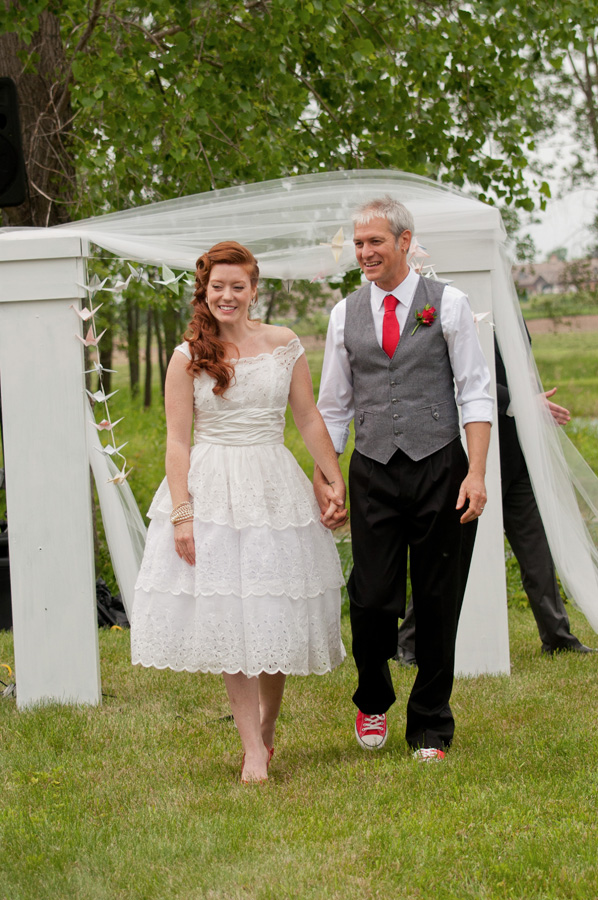 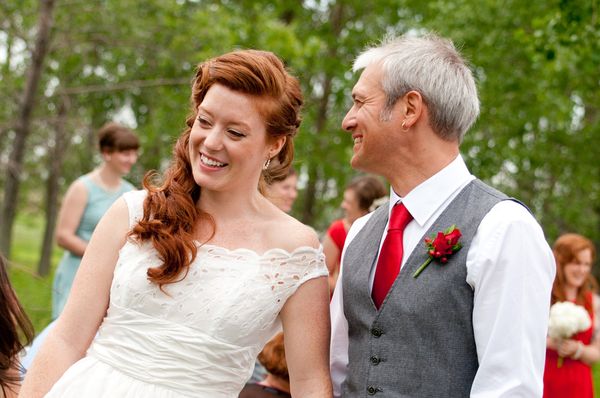 The first step was to clean it, which was wonderfully accomplished by soaking it in OxiClean. 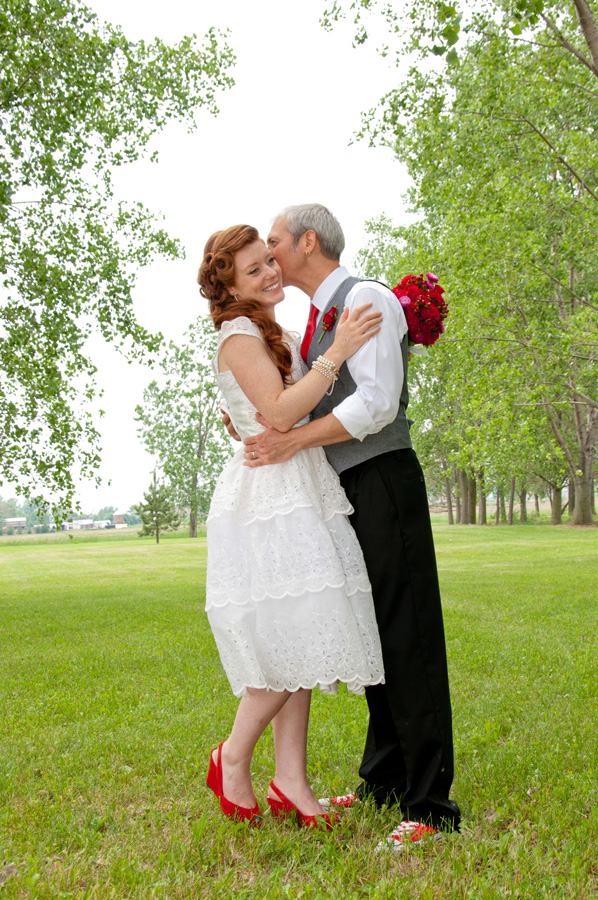 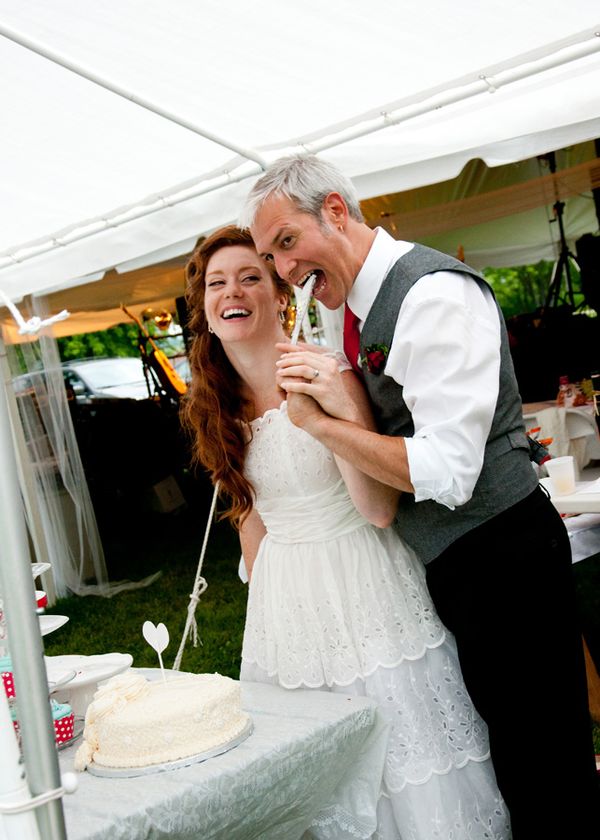 Then we discussed alterations. My mother had previously done some night-before-the-wedding sleeve alterations of her own -- removing a bit of gathering on the sleeve cap so it wasn't puffy anymore but instead laid flat. That alteration also inhibited range of motion, so the entire sleeve area was a big stress point and very much in need of repair. There were some other small tears in the skirt that need to be repaired, as well, but nothing too serious. 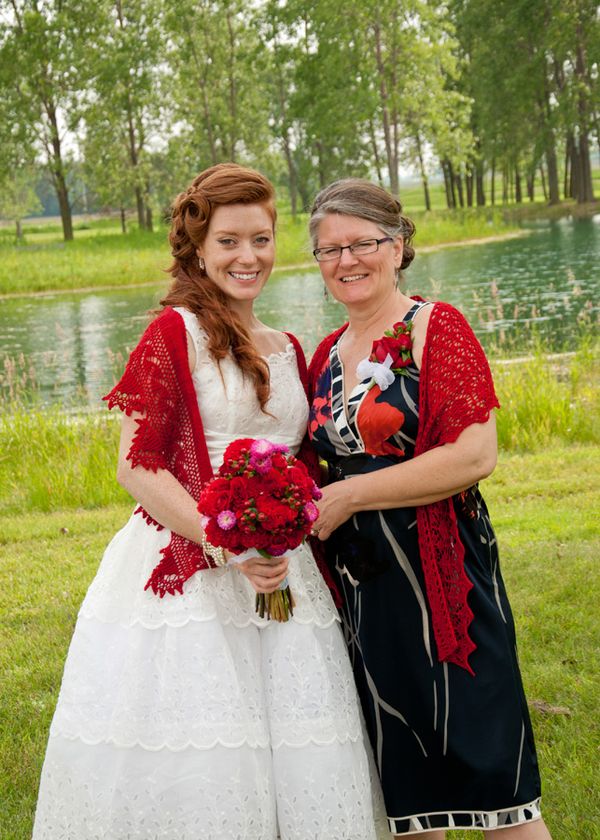 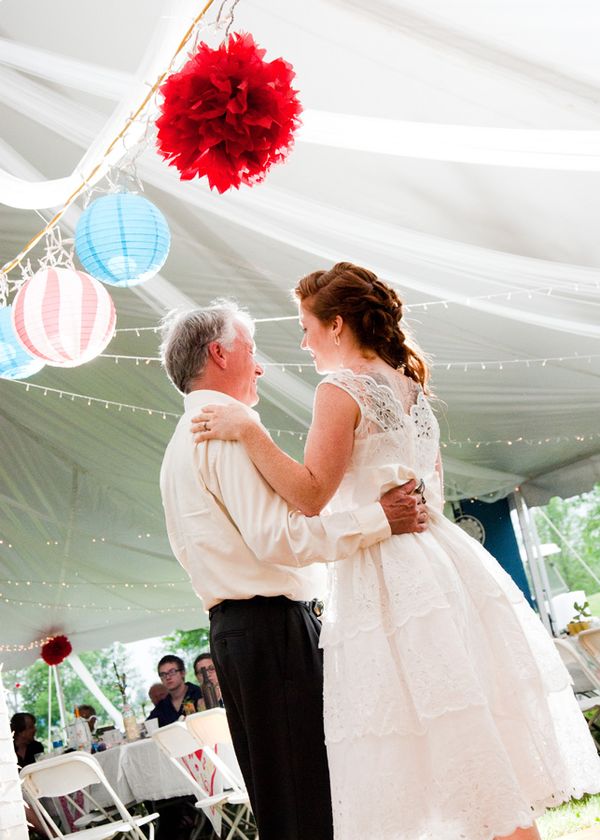 The tailor was able to "steal" small bits of fabric from here and there to repair and reinforce the sleeves, and she replaced all the stays and the crinoline. The satin sash and bow had to be re-used because there was absolutely no new "white" satin that matched! 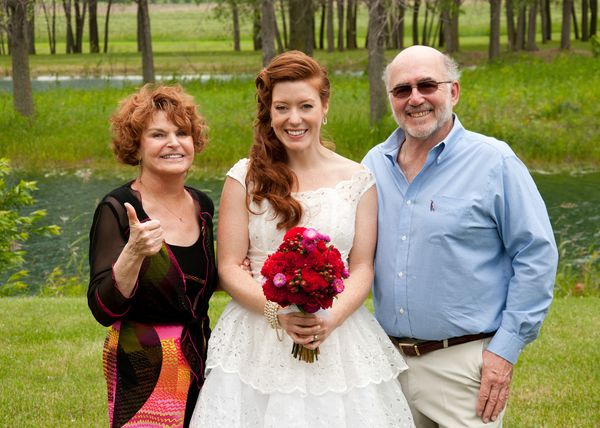 My mom had received some good news about her response to treatment just the day before the wedding, hence the "thumbs up!"

I think nearly all the topics have been covered with just this dress! The dress is hanging (covered) in my work room. We had talked about some repurposing options, but have decided to keep it... there are others in Ali's generation that may still wish to use it, and maybe even in the next. It would be nice if it was still an option for them, anyway.

That dress is simply beautiful in all of its iterations, and I'm so happy to hear the whole story. It is indeed an heirloom, designed for longevity.

I remember when it was on your wicker dress form and I loved seeing the changes and restoration you all did so that Alison could wear it. Your mom got married on Dale's 7th birthday!

and another wonderful entry in the Slow Fashion book. Ali looks radiant in the dress and I'm sure part of that glow must come from wearing a dress with that history and love and style all woven together. I hope the dress gets at least one more day to shine ... but even if it doesn't, it's had a wonderful time!

This dress embodies your whole slow fashion story and I have been fascinated by all you've done to make this dress work for Ali. It was important to you and Ali and your perseverance paid off creating a magical day for the bride. It's wonderful to hear the story will go on!

What a wonderful family heirloom. The love in the dress adss to the special day of all who wear it. Thanks for sharing.

I just loved seeing these photos and learning of the tender thoughts behind your mom's wedding dress. My daughter had my dress redesigned getting rid of the definitely 1960 straight skirt design. It was made for me by my mother-in-law and has many memories aside from me wearing it to marry her wonderful son over 50 years ago. We've also saved it - you just never know who might want to wear it. I also loved the photo of you and your daughter in the red shawls!

I love this story so much. How cool. So very, very cool. XO

What a great story and what a beautiful dress. I never preserved my gown; it sat in my parents overheated attic for decades. My youngest daughter got married last year and had a dress made. I cut up my decomposing gown and salvaged the lace. Lots of Oxiclean later, the seamstress used the lace from the bottom of my gown for the sleeves of my daughter's dress. It was lovely.
I'm glad you're still holding on to your mom's dress. Ali looked beautiful in it; I love the touches of red she wore.

This is fabulous! No daughters here, or I would be forcing my own wedding dress on her/them.

Absolutely beautiful! Wish my mother's dress was still around for me to do the same with!