Ten on Tuesday: An October Weekend

Ten on Tuesday:  10 Things I Did On the Weekend

1. Slept In. I had an early morning message from Ali on Saturday: No market! She is busy forwards and backwards and combined with a few other things happening in her world, it just wasn't going to happen. So I went back to bed! I didn't really sleep much more, but it sure felt cozy under the covers. 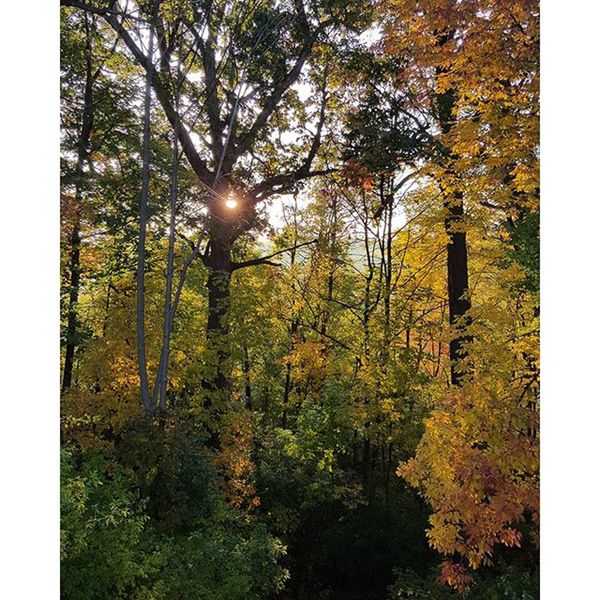 3. Cleaned out the garage. Overtaken by art displays and indigo dyeing apparatus, my car hasn't seen the inside of the garage since spring! I hate to mention it, but snow is on the way! We still have to move the indigo vat before there's room for the car (maybe tomorrow). 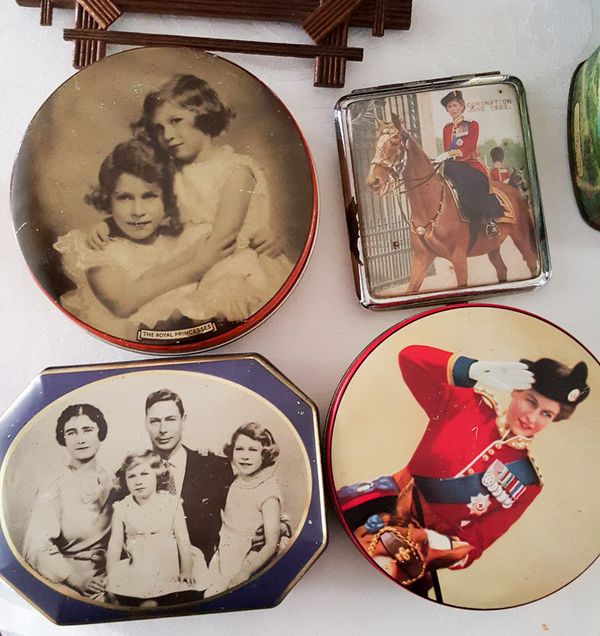 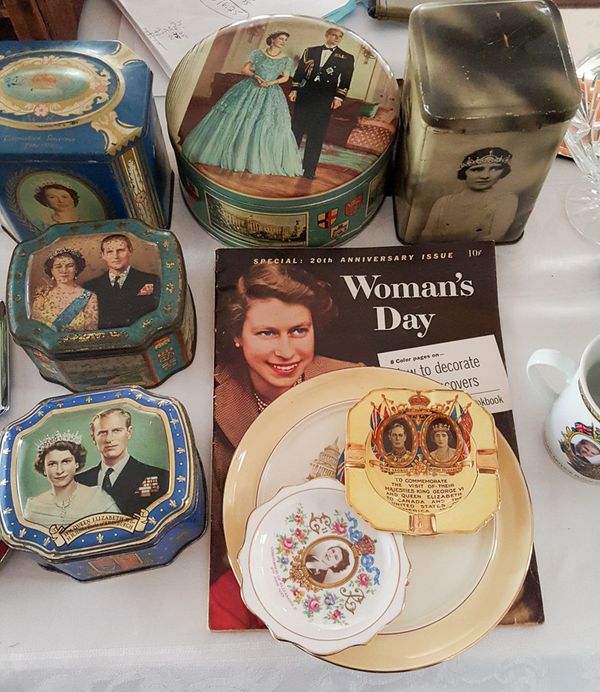 4. Did some thinning/cleaning out at Mom's. I decided to be productive with my "extra" time on Saturday. There's still plenty of extraneous stuff at Mom's that she loved and tended, but to which my stepdad doesn't really have an attachment. The Royals, for one thing. Have a thing for The Royals? Mom did! I thought I'd give it a couple of hours... five hours later... (so.much.stuff).

5. Marveled at some of the things I found. A few tugs at the heart. 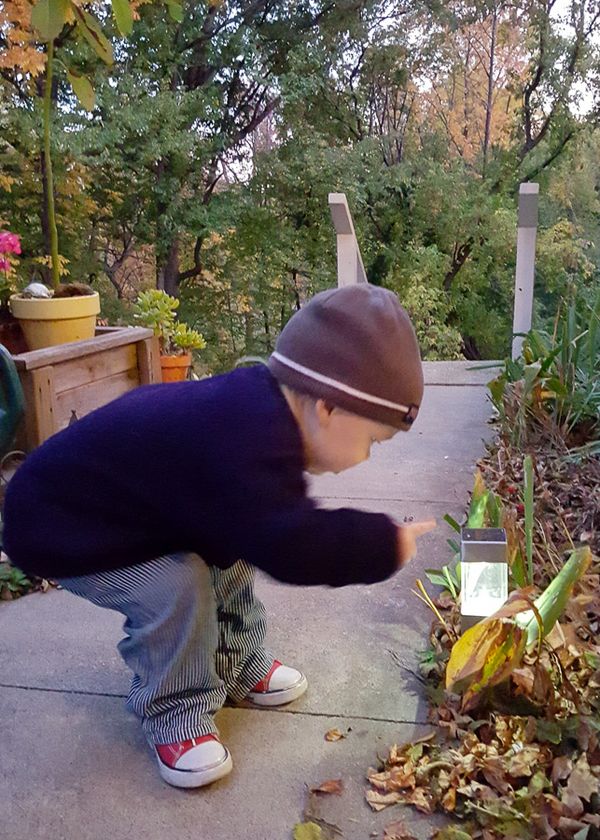 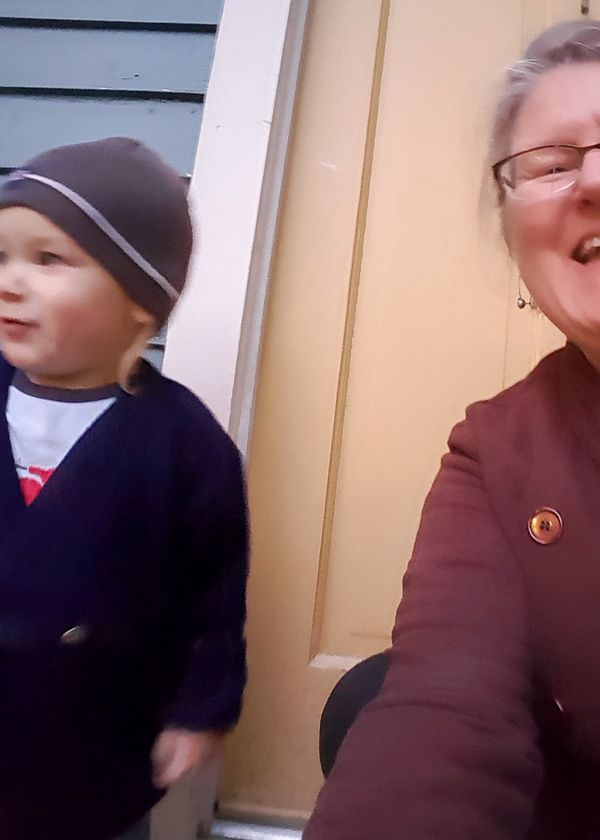 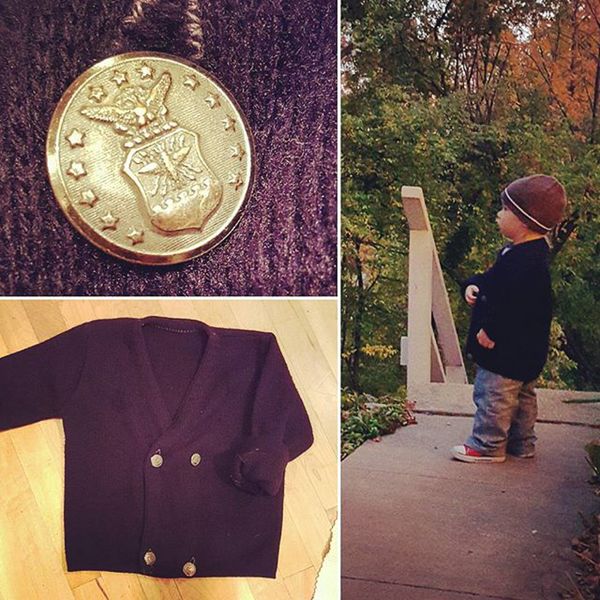 6. Watched Junah for a while. (Impossible to photograph that boy lately!) He's wearing his Great Uncle Mike's sweater, which I found in a drawer at Mom's. I had possession of it for a while when my girls were little, and I'm pretty sure that Annie had same when my nephews were younger. It's probably a size 5-6 (the sleeves are rolled twice in these photos). The tag is gone, so I have no idea of manufacturer, origin, or content. It's almost 50 years old, though, so most likely U.S.-made and not likely wool. Heh. The buttons were nabbed from one of my dad's old Air Force uniforms. #slowfashionoctober #handmedowns 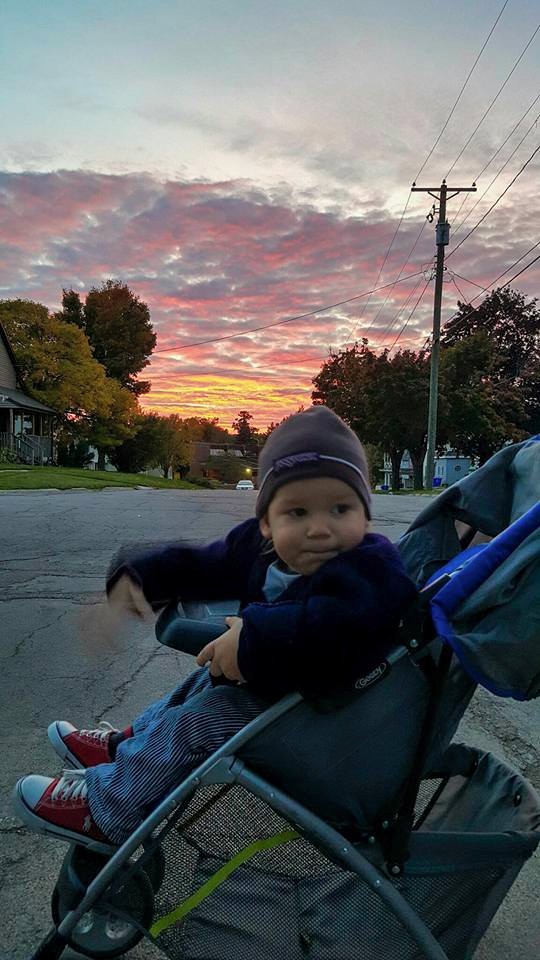 8. Watched the sun rise again. Kate, Ali and I were on the road by 7 a.m. on Sunday morning, bound for Reedsville, WI... 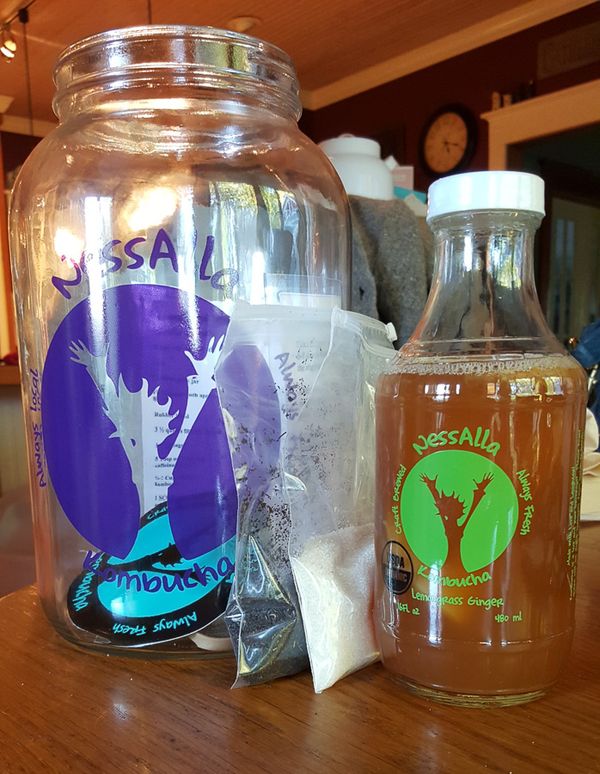 9. We went to Fermentation Fest! Ali & I took a class: Kombucha 101 presented by Vanessa + Alla, founders of NessAlla Kombucha in Madison. We both bought starter kits; everything is there: a 1-gallon jar, oolong tea, organic sugar, a (genius) laminated recipe/instruction card, a cotton square & rubber band to tightly cover, and a SCOBY! Kombucha will be happening!

Fermentation Fest, an initiative of The Wormfarm Institute, is FAB! It's been on my radar for a year or two. My sister Karen went last year and took a class or two; this year, I think she took four or five! In fact, she was so busy that we didn't even have a chance to meet up. (We'll see each other again soon!) This was my first year and that was my only class... definitely not the last. 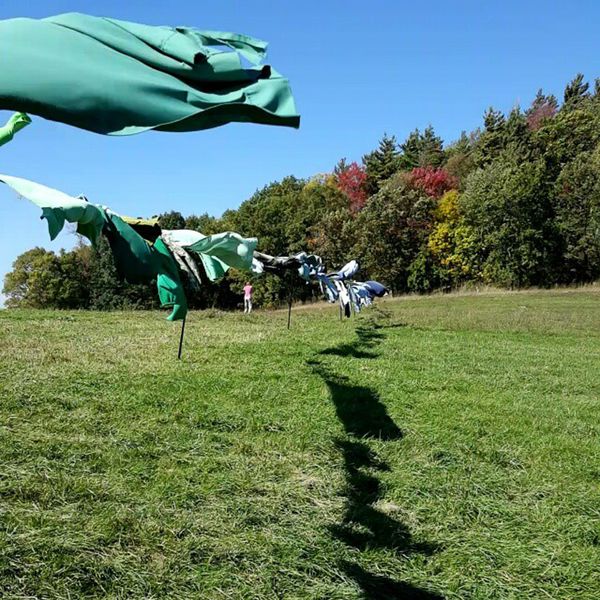 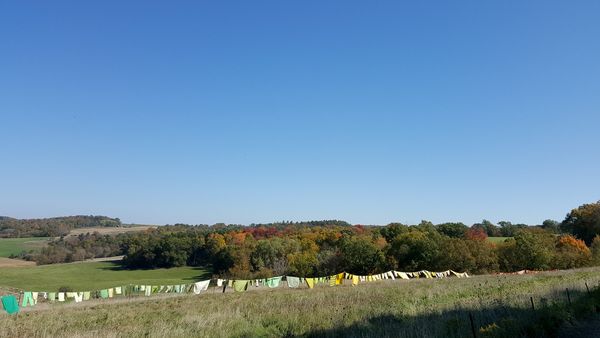 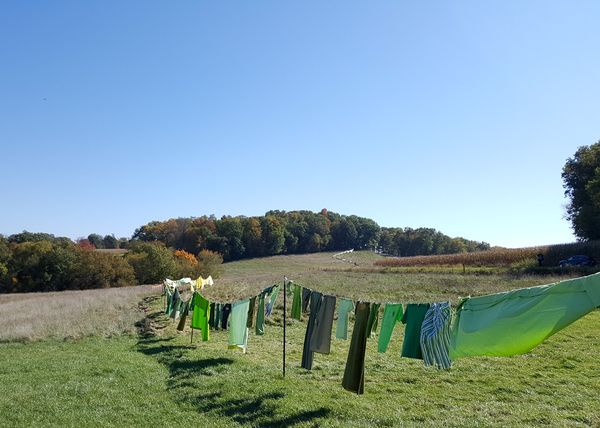 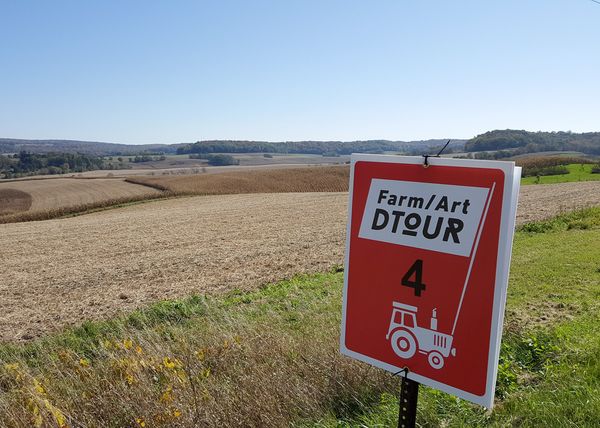 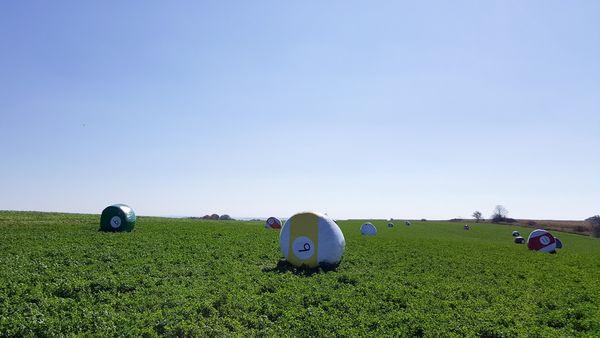 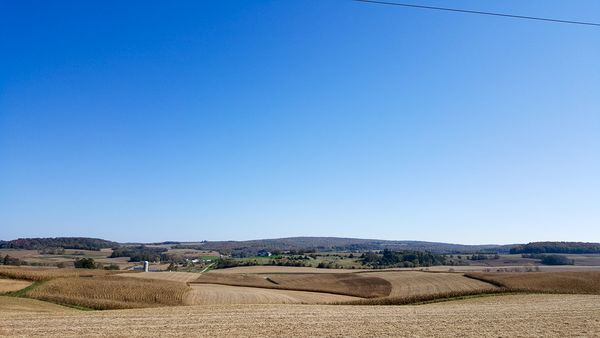 10. Farm/Art DTour. Katie took in part of the tour while Ali & I were in class, and we drove through the rest afterwards. Incredible. Obviously, one of my favorite installations was Monday is Wash Day by Brenda Baker. I wish I'd taken more/better photos of that. AMAZED!

Junah is very handsome in his sweater and cap. Maybe he's in a camera aversion phase. Your whole day at the Farm/Art DTour sounds (and looks) so interesting and I can hear your joy of the event in your voice. The wash day installation is SO you!

Sounds like a great weekend. That Royal stuff is awesome! I'm a big fan of Queen Elizabeth. I think she's an amazing person and have always wanted to meet her. I keep meaning to try kombucha but I'm not sure I could drink it.
blessings
~*~
ps...thanks for your encouragement to do the Scoreboard. I'm having a blast! :-)

Junah's sweater is amazing, as is the sunset behind him. Monday is Wash Day is incredible! There have been several times that I've wished my clotheslines were that long (when washing all the bedding and towels), but I've never thought of my wash days as art. Now I will!

I slept in, too!! I only managed it on Sunday, but it was glorious. And I'm super curious about the kombucha project. I love kombucha, but I don't know how to make it, so I hope you will update us all as you grow your SCOBY and brew up some kombucha.

That all sounds like a really great weekend. I love that Junah is now wearing Michael's sweater. Those tugs at the heart can sure be bittersweet.

My two favorites of this ten: Junah in that cardigan <3 <3 <3 and that Farm Art installation with the wash--although a fermentation fest would be a close third. All so fun and satisfying.

what a fabulous weekend! that Wash Day installation makes me smile (and glad I don't have that much laundry!)

Hah! I'm from Kansas City where everyone has Royals (baseball) fever right now so thats where my mind went, although I'm not sure thats what you meant...