Prep for Baking Day
Ten on Tuesday: In the after-holiday glow 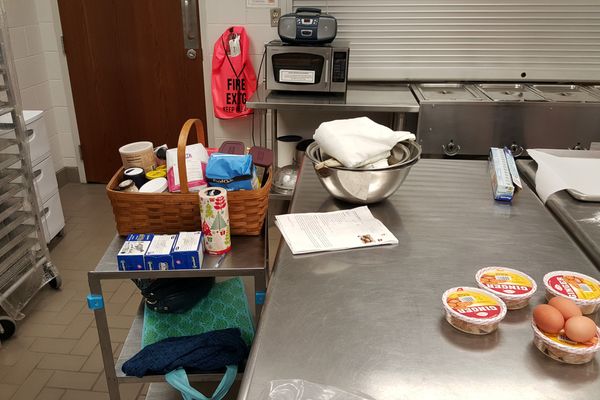 This is my only photo from our afternoon of baking... mainly because my phone was otherwise occupied playing music!

I had three recipes on my list this year. Two were tried-and-true from last year: Ina Garten's Ultimate Ginger Cookie and Granny Wallace's Shortbread Cookies. The third was new: Dark Chocolate and Guinness Cookies.

I wasn't quite on my game, it seems, because there were little problems with each one! The ginger cookies were slightly overbaked and not as soft as desired (still delicious, though, and still a favorite). The shortbread cookie dough never came together, so no shortbread cookies at all! I saved the crumbles, though, and will try to make something out of it... I'm thinking along the lines of a crust. We'll see. I had printed the same chocolate cookie recipe as linked above but apparently a slightly different version -- that didn't indicate the quantity, so I was a little blind in that respect. The bigger problem, though, was that I made a triple batch in the big Hobart mixer at the kitchen and forgot to scrape the bowl mid-way through mixing. After scooping and filling three or four trays with cookies, I began to see that there was a lot of butter/sugar stuck at the bottom of the bowl. So the last tray or two were pretty ugly -- very buttery and gross (but also very delicious!).

There were enough "good" cookies to fill my gift bags, so I'm okay with it. I wasn't the only one with problems -- hard caramels (the candy thermometer broke), spritz cookies that refused to spritz! It was about more than cookies, though, and was a fun day. And exhausting.

The kitchen is about an hour from my sister's house, and the boys drove up with us. We hardly saw them all afternoon, they were so busy shooting buckets and playing in the adjoining gym! It was fun to chat with them in the car, but best of all was the personal on-demand Christmas concert! "Stille Nacht," "Go Tell It On The Mountain," and "Ding Dong Merrily On High" with that lovely (and sometimes hilariously) drawn-out "gloria" -- in a perfect "boy choir" voice and sweet vibrato.

How did your prep go on the last weekend before Christmas?!

It sounds like a delicious day of baking despite the problems. Being together with family is what it's all about, right? Smith and I enjoyed a leisurely weekend together, as Christmas isn't a big deal for us.

It can be so frustrating when cookies don't come out right - I made a batch of chocolate crinkles yesterday and had to add almost 1/2 cup more flour before the dough wasn't too sticky. Weird, right? I'm glad you had fun despite the challenges and that's really the point, after all.

I was sick all weekend. Just after I put a batch of cookie dough in the fridge, I went to bed. Going to try to bake them tonight and catch up.

Some days are like that. My baking was replaced by other necessary tasks, but some of it will still happen. Plus, NewYear's cookies are totally a thing, right?

my baking day felt like yours...except no long drive and no happy boy chorus. I'm thinking I need to start training in January so I'm ready for the marathon baking next December!

That sounds like a lot of fun! I love that cookie mishaps are usually still delicious. I am ridiculously behind in the Christmas cooking. I think I will end up doing all of my Christmas baking tomorrow night. EEK!

I love that you all get together in a commercial kitchen for your cookie-baking! I just turn my kitchen into a sort-of nightmare bakery crime scene . . . but it generally works. :-)