Once upon a time, Ali had a brilliant idea about making quilts together! 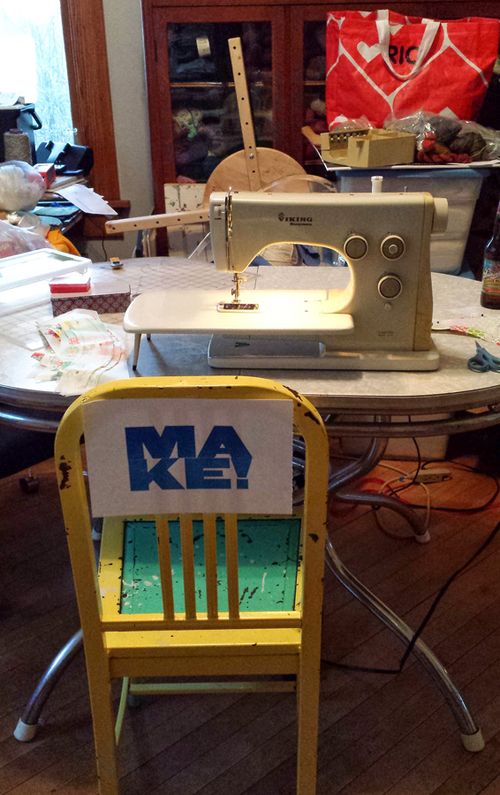 Ali: I think we should have a double wedding ring quilt challenge. But it has to be a secret because mine will be for Abbey and Kevin. {A wedding present for their August 2013 wedding.} But you can report your progress, and at the end surprise the masses with TWO beautiful finished products. Eh? Eh? smile emoticon

We have 5 months! We should make a guide of some kind showing what we have to get done in one week. Pace ourselves. I have no idea how to begin. smile emoticon

Vicki: I've never made more than a quilted square!  Will have to do some research... and, first, you need to get a handle on colors for Abbey & Kevin! I want to go to a good quilt shop!!! Am excited now!

Ali: Me tooooo! We'll have to make a date! 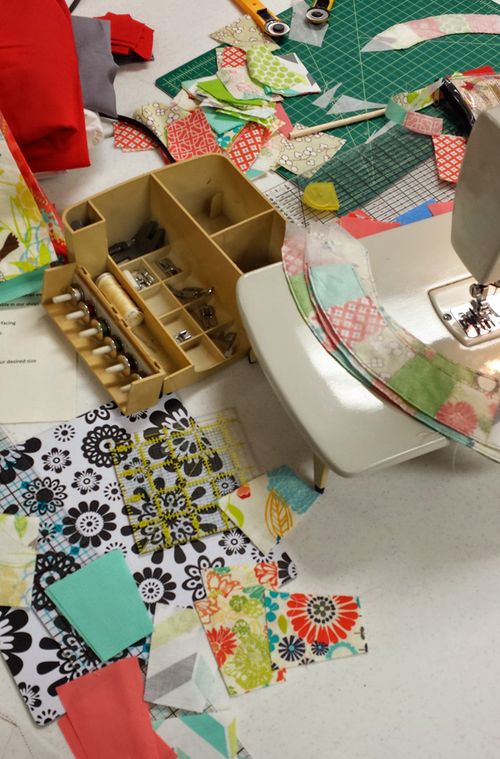 With a 3-month-old baby only 6 months until her best friend's wedding day, it was quickly decided that we'd be making only Ali's (king-size) quilt, and that I would be her helper! She wanted to use the "Easy! Fast! Smart!" Quiltsmart method, which involves no tedious piecing and, instead, utilizes fusible interfacing to make the arcs and assemble square blocks. 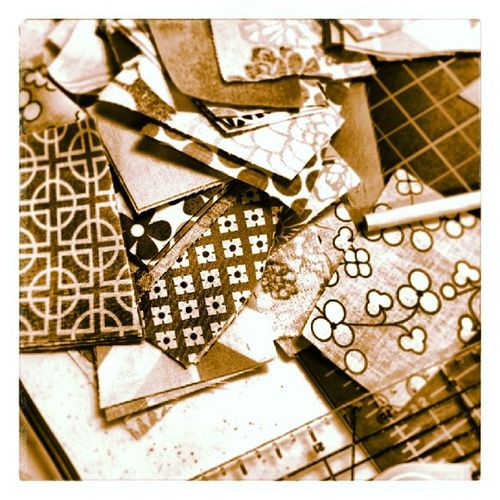 As far as I'm concerned, and having never made a traditional pieced double-wedding ring anything, the jury's still out on the ease, swiftness, and/or intelligence of making a quilt this way (your mileage may vary).

Vicki: We need to carve out some production time... a quilting bee!

Vicki: I have turned all that were trimmed and am now trimming more so that I can turn! 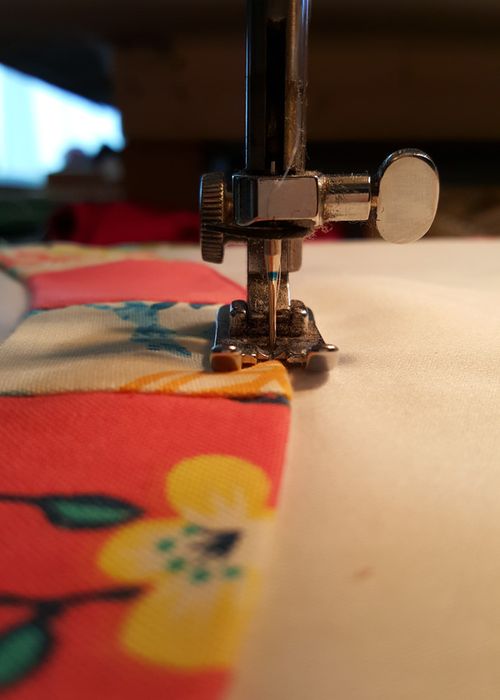 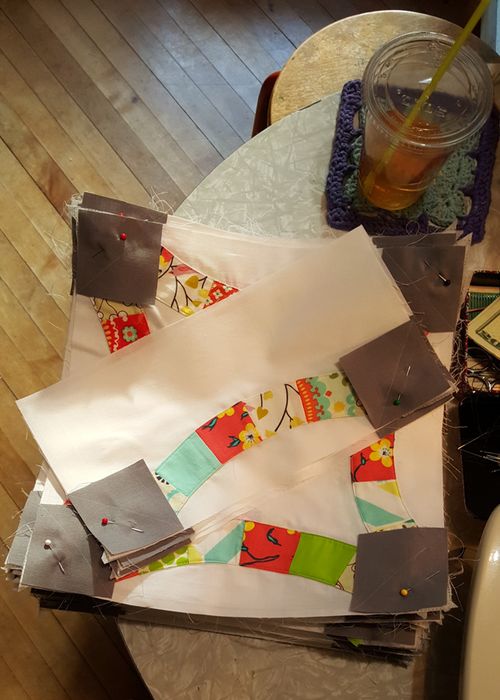 Some parts of this quilt traveled across the pond and I worked on turning and finger pressing in Scotland -- on the train, playing Scrabble in the evening, etc.

Vicki: I did some sewing & trimming for quilt yesterday and thought I was caught up... but then saw a whole 'nother pile! Haha. Hope you're having fun up north. XOXO

Ali: This thing is a nightmare!! Haha. Xoxo

Vicki: WE CAN DO IT with this quilt thing!!! smile emoticon 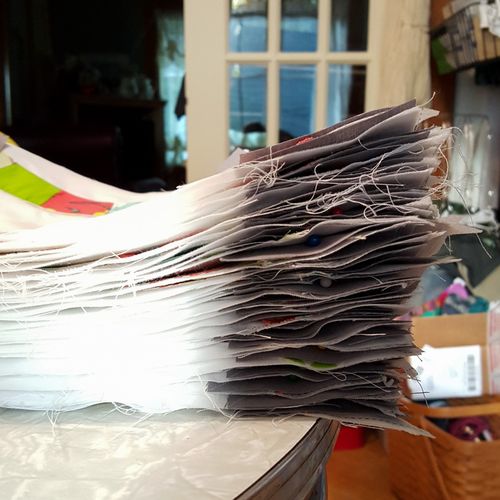 Vicki: {Random sewing talk.} Also, we have a quilt to finish.

Ali: And yes. Quilt. I know I still need some more white fabric, but it's coming along. I can maybe give you what I have..it's ready for the clear thread.

Ali: I suppose I haven't sat down and done the math since the way beginning, and I'm sure it was hasty. 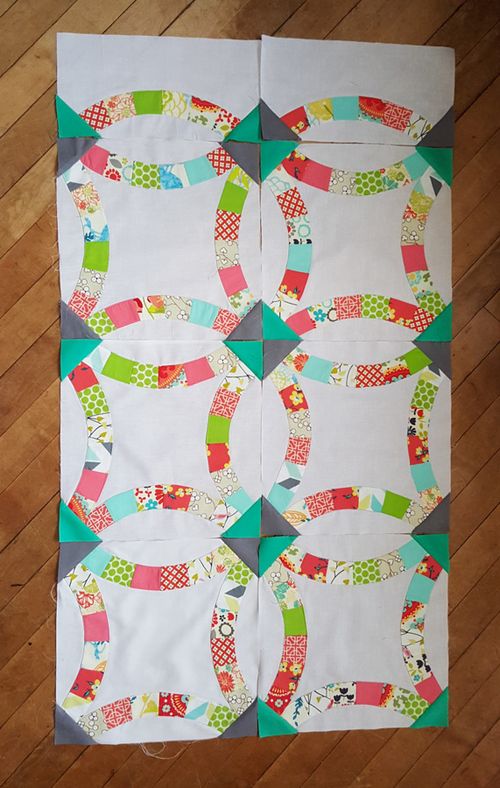 Ali: I know this is on the back burner... but I wanted to touch base with an idea! We sew the squares into 1'x9' panels, so maybe we cut 9 1'x9' panels of white fabric and use that as the second layer before the batting. Then it's all connected and sturdier and we don't have an extra actual fabric layer to send along. Yes? I haven't sewn these together lengthwise yet but... smile heart-eyes emoticon

I can't remember exactly, but it was sometime in late summer/early fall that we delivered the finished quilt top to the quilter. We had it done at a shop because that was just WAY beyond either of us. (Ali: I have no idea how to begin. Vicki: I've never made more than a quilted square!) We've learned some things!

Vicki: I just watched a GREAT tutorial for binding a quilt. WE CAN DO IT! Do you have fabric for binding? smile emoticon

Ali: I have some packaged white quilt binding but we can use something different if you'd like!

Vicki: I actually think it would be easier to do it with fabric strips instead of packaged binding! I discovered all the old backing yesterday, too, so have plenty. Making the strips won't be difficult at all. I forgot the dimensions of the quilt, though, so that was my next step! Do you remember? If you want to do packaged binding, I can pick it up. I watched 2 tutorials on YouTube -- on one Fat Quarter Shop and the other by Missouri Quilt Co. I actually think the FQS method would be best (simple finish on the front).

Ali: Alright! Let me know how you'd like me to help!

Vicki: I need to measure the perimeter of the quilt; cut, sew & press the 2.5" strips. I can do that part if you want to sew it on... or I can do the first step of sewing and you can finish. I'll measure & cut tonight!

I picked it up less than two weeks ago, and made the binding. 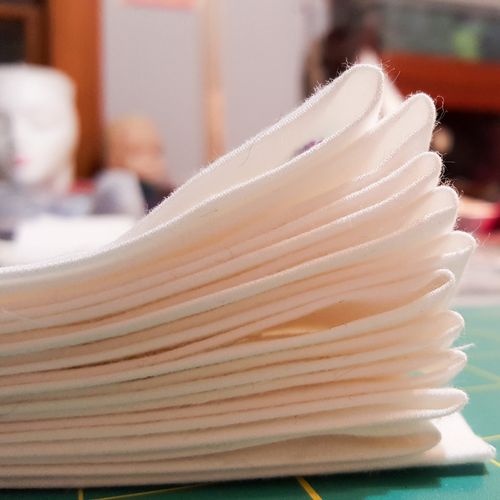 Not only did it take me THREE TIMES to sew the miters making this long strip of fabric, I also made almost twice the length required for the task because... I don't even know why!! But I did a good job and it looks nice and now I have extra. 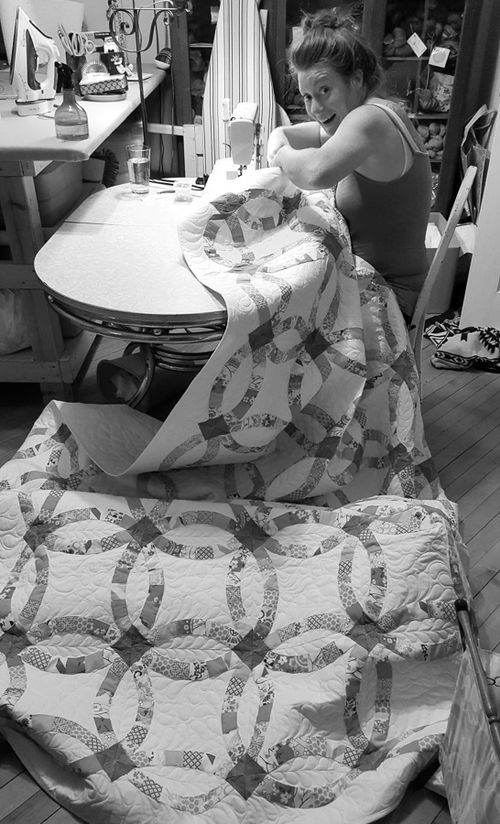 I made the binding one evening, and Ali came over the next and sewed it all on in just a few hours! After the blocks were assembled, it all went pretty quick! She washed it within a day or two. 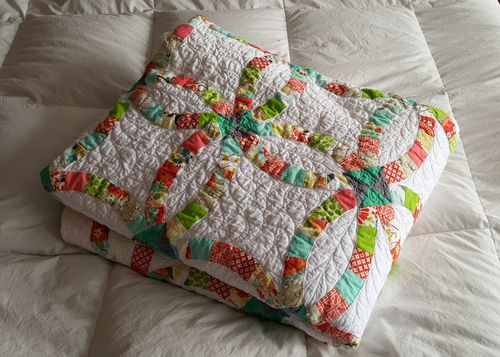 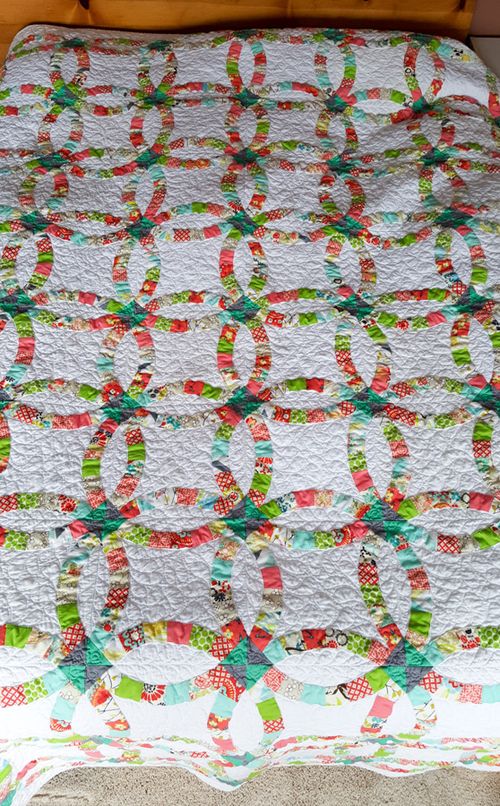 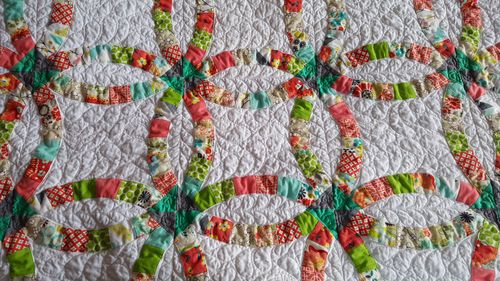 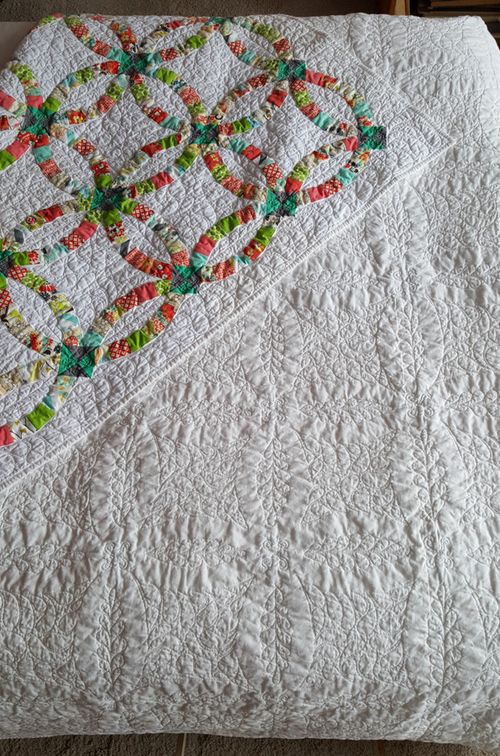 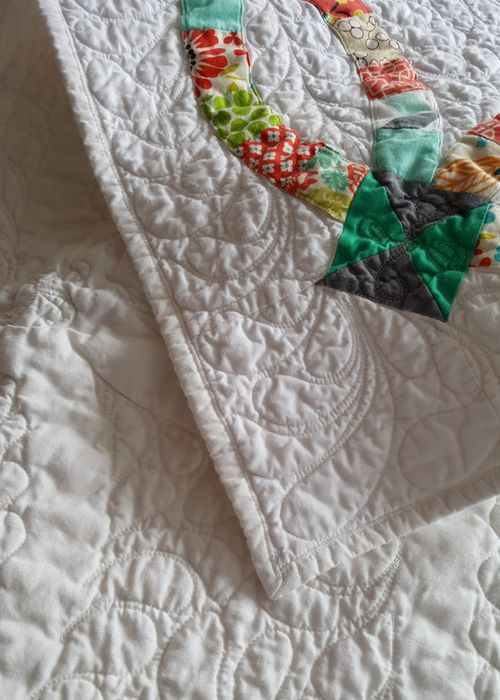 It's done and delivered, appreciated and loved!

I still can't quite believe it!

I am in complete and utter awe at the two of you. The audacity to think you can make a quilt without every knowing how, in a size that would cause any quilter to whimper, and YOU DID IT (within two years!)!!!!!! It couldn't be more beautiful and I know it will be cherished by generations to come!

That is an EPIC project! I've made a bunch of quilts but I've never even been tempted to do a double wedding ring - all those curves! Arrrrgh! You two did a fantastic job and it will be loved and treasured and will become an heirloom. Congrats!

Absolutely incredible! And a mother daughter event for the ages!

So, in 1989 (that's correct) I offered to make my newly engaged sister a double wedding ring quilt. She was thrilled. She currently sleeps under a fleece blanket and I have finally, FINALLY offered to make her a quilt when I know I have the time, money and fortitued (plus hard won experience) to do so. She has a significant birthday coming up. I'm waiting to hear back from her, or if it was enough to know her big sister "finally failed" at something. (That is a long sisterly debate, as you do.) Your project is absolutely gorgeous and I admire your perseverance.

What an incredible undertaking. It's beautiful and you got the joy of doing it together. So special!

I love everything about this quilt - the fact that you did it together, learned along the way, your color choices, the quilting, and that you finished it! Congratulations on your wonderfully epic accomplishment!
P.S. I'm really quite taken with that feathery quilting inside the arcs and think the back of the quilt is also beautiful in its own way.

This is so beautiful and such a great mother/daughter project.

Oh. Vicki. What a beautiful quilt. And the story is one for the ages!!! (You and Ali are quite the pair.) Such an epic project. I LOVE every bit of it.

wow, wow and WOW! the quilt is beautiful, but I think I love the story of you and Ali crafting it together even more.

that quilt is beautiful for two people who have not even made more than a square to bang out (slowly) a king sized double wedding ring quilt is AMAZING. I have quilted for years and have not attempted one yet, not even a wall hanging...Sharon

Gorgeous quilt! Double wedding ring is tough and you did a wonderful job.

Oh my gosh - that is so beautiful! The colours are stunning and the quilting itself is such a beautiful pattern. You could use the quilt on either side but given the work the two of you put into the top, though, I wouldn't dare!

I just read your post with interest and laughter. What an undertaking and one that I would not do as I've made my share of much smaller and less complicated quilts to know better. You both did a super job and it's lovely.

I'm suffering from serious quilt envy right now! Is it okay if I want to be you when I grow up?

What a wonderful story to go with the quilt. And the quilt is amazing! Really! What a fabulous gift...I am lucky enough to have a couple from my childhood...love them!

What a beautiful quilt! Making a king sized DWR...wow! Such a special time between mother and daughter!

I may need to divorce my husband and get remarried just so you two can make me a quilt.

My MIL quilts and when it was suggested to her by my husband's SIL that she would like a quilt from that pattern SIL was told that it was not something that my MIL was willing to tackle ever. Congrats on your first amazing quilt.

EPIC and sure to become a treasured heirloom! Absolutely spectacular!

Wow! That's an amazing job and to think you didn't know much about quilting when you started. Such a wonderful project to do with Ali...wonderful memories.

Fabulous!! Love the quilt & the story that goes with it. Now that I'm retired, I hope to take up quilting, but definitely not something as big as this project. Hope to do pillow covers, maybe a wall hanging or two, and a toddler bed-sized quilt for my grandson.