It was a low-key, relaxed weekend and that's OKAY by me! It's been a while and, boy, I needed that.

To set the tone, Rusty & Katie both had art events to attend on Friday, so that meant a quiet evening at home alone for me... I knit and caught up on some Tivo'd programs.

Ali came over for a while on Saturday morning to go over some bookkeeping stuff. Rod & Junah swung by to pick her up and head off on some errands. She called me from the driveway, and told me that all Junah was saying was, "Nona, Nona, Nona..." Could he stay while they did their thing? Well, of course!

We have definitely turned a corner! A month ago, Junah would still have a hard time more often than not when he was dropped off. Now, he can barely get his jacket off quick enough and is nearly oblivious to his exiting parent... and HE DOESN'T WANT TO LEAVE! Makes a granny feel good.

Ali was over for a little while again on Sunday morning, working with Kate on a new website. While they did their thing, I finally started to clean up my work space -- big table, sewing table, stuff on the floor. I realized that actually finishing one of the projects on my worktable would go a long way in helping the cause, so I worked on -- and finished -- my first Stowe Bag! 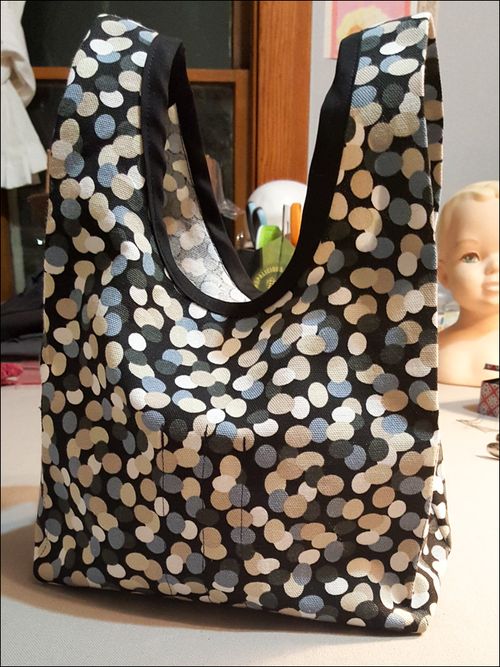 It had been idle for weeks, needing only bias tape to bind the handle edges and finishing. I was going to be clever and use some vintage bias tape that I'd picked up somewhere, but discovered that it was LAWN, and definitely not sturdy enough to bind the handles of a work bag! I had to pick up some sturdier stuff, and then Christmas, and then New Year's, and then a baby birthday... 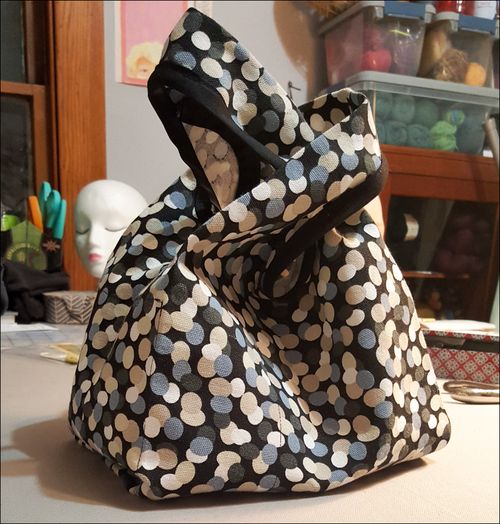 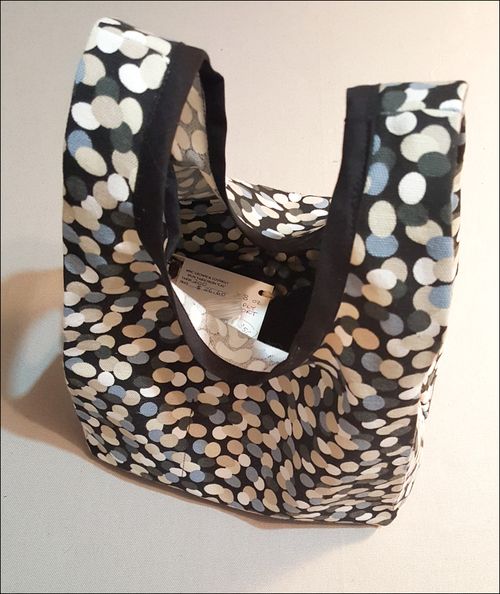 This is the small size. I used some sturdy woven fabric that I've had for a while (the original purpose for which is long lost) (I'm sure there was one). The Stowe Bag is probably the most structured thing I've ever sewn, and maybe only the second time I've ever worked with bias tape. The construction is interesting, and I love the interior pockets!! It's the perfect size for a knitting tote. I think the large size would be perfect for toting a sewing project. 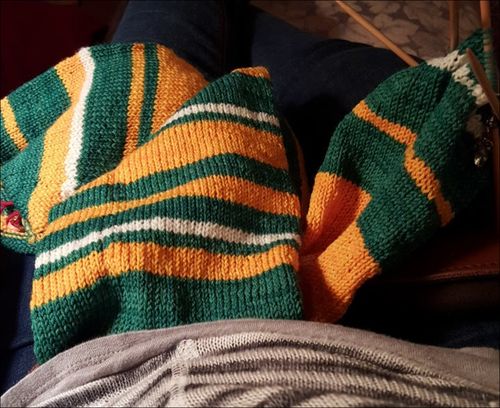 The weekend knitting was all Scoreboard KAL. I am now on Week 15... and I am going to run out of green yarn before the end of Regular Season. I don't have another skein of that yarn! Ack. What to do? I don't want to just end in the of the game, this close to the end; that would always bug me. On one hand, I dyed that yarn myself... though I'm nearly certain that I have no record of what I did. On the other hand, it really is the perfect Packer green and I should figure it out! (Also the gold.) It's about time the dye pot was dusted off, anyway, eh?

I love that Junah wants to hang out at your house now - there's a win right there. Sorry about the Packers, though, that's a bummer.

Lots of good stuff this weekend - some free time, a beautiful bag, and a grandson that knows where the fun is! Sorry about the green yarn, but I'm betting you can solve that problem handily.

Of course, Junah loves you -- everyone does!

Love your Stowe bag. I'm anxious to get my pattern and get started.

You did a fabulous job with the Stowe bag. The bias tape looks perfect! Hopefully you'll be able to dye the scoreboard color to your satisfaction. Sorry it won't be growing as long as you'd like. Yay! for your win with Junah!

COOL Stowe bag! You did a lovely job! Although I'm not at all into football, I really like your Packer cowl. You'll be the warmest, best-dressed fan around. (And Junah. What a sweetheart! And . . . of COURSE he loves Nona!)

Love the bag. I keep promising myself I'll make time to sew , because of projects like this.