In addition to (or, as a set-up for) BEGIN AS YOU MEAN TO GO ON, I spent some time cleaning things up at the end of the year. One of those things was KonMari-ing my Bloglovin' feed. First, I hit "Mark All As Read," and then went through one-by-one to determine the level of JOY with each. It made me a little sad to "Unfollow" some of my favorite feeds from the old days, but after years of nothing new... it was time to realize that they are not coming back and give it up. There is no joy in a dead blog.

I spent New Year's Day morning photographing a newborn (part one), which was fun, and I believe my first-ever baby girl!! Part two of her shoot will be coming up on Wednesday. I photographed her big brother as a newborn; he turned four last fall (time flies)!

After that, Rusty & I met at Home Depot to choose and purchase a water filtration system. We live in an area with extremely hard water and a softener is an absolute necessity; unfortunately, the softened water doesn't taste that great. We've always had a "hard water" faucet to use for drinking, coffee, tea, cooking and it tastes better but isn't all that great, either, and the mineral deposits are crazy! We've been lugging gallon jugs of filtered water from the grocery store for a couple of years, now, and the coffeemaker makes it easy to measure the difference it makes. When using hard water from the tap, deposits would build up, slow the drip, and every couple of months we'd have to run a few cycles with a vinegar-water solution to get things flowing again. Since using filtered water from the store... I can't even remember the last time we had to do that! 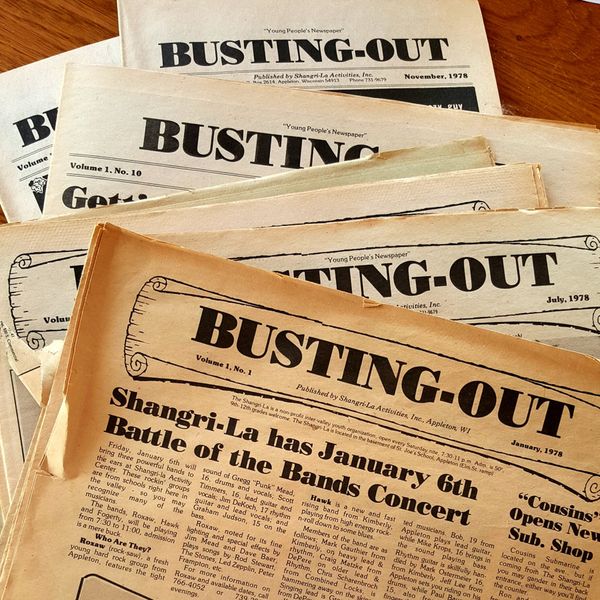 Of course, the water filtration project required cleaning out under the sink to make room for new equipment. In addition to some cleaning supplies, we've always kept unused vases under there; one category that could easily be thinned out and stored elsewhere. I had just the spot in a nearby under-used cabinet that, naturally, also required cleaning out! That cabinet holds extra/holiday linens, our greeting card collection, a few craft supplies, and some old yearbooks (GAH!). The cards, especially, needed organizing and cleaning out, and I reduced that by at least a half (WHY so many card-less envelopes???). I also found my stash of "Busting-Out" newspaper/mags! Closing in on 40 years, it was just one way that my best friend and cohort helped me ("earth-tone girl") grow & get out of my shell back in the day. She was the spearhead, I did some writing. It was mostly local stuff, but there were also record & book reviews, and we did a few celebrity phone interviews, including one with a young and hot (still, IMHO) Don Johnson. What a blast we had! 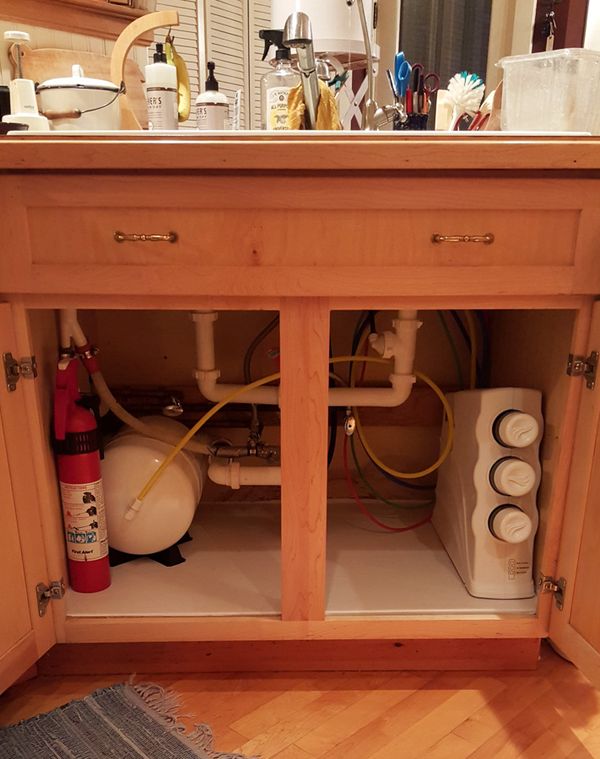 Plumbing-related projects are dead-last on Rusty's list of "favorite" things to do, but it went pretty smoothly (only three trips to the hardware store) (one of which could have been avoided). He ended up first having to replace the entire floor of the under-sink cabinet, so it took two days altogether (and I'm glad he didn't rush). Doesn't it look spiffy? Junah was over for a few hours on Friday afternoon. OMG, that kid! The words are tumbling... you can practically see and hear the synapses snapping! Can you believe he's going to be TWO next week?? 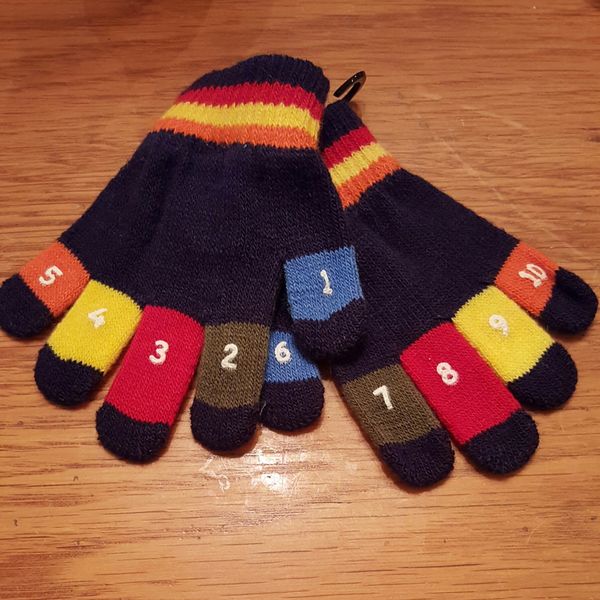 I found these gloves for him the other day -- he loves getting each finger in the appropriate place -- and these, in particular, were a big hit: 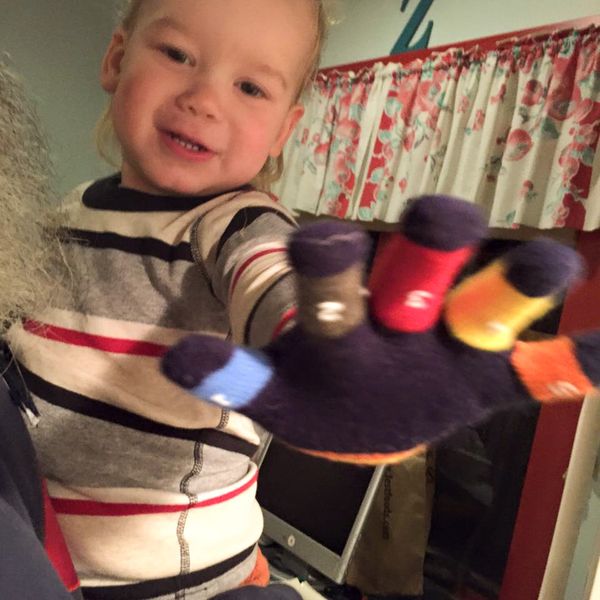 "Tried these gloves on when we got home at 3:45. Haven't taken them off since (we even took a nap.)"

They finally came off when he was trying to peel a banana! 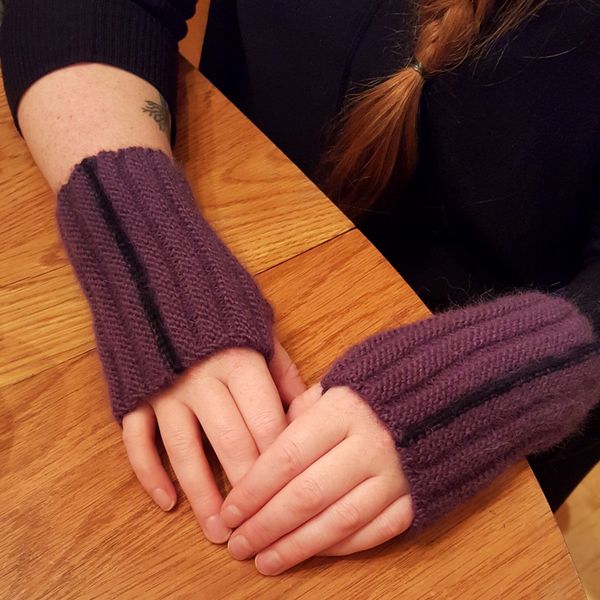 I'd intended to start another pair of Trip Mitts over the New Year weekend, but did not; in fact, except for game-time knitting on my Scoreboard KAL last night (I'm still on Week 11... of 17), I didn't do any knitting. Or sewing. My arm needed a rest, I think. I also need some "smooth" yarn for working provisional cast on -- what's your favorite? I'm never using the right thing. 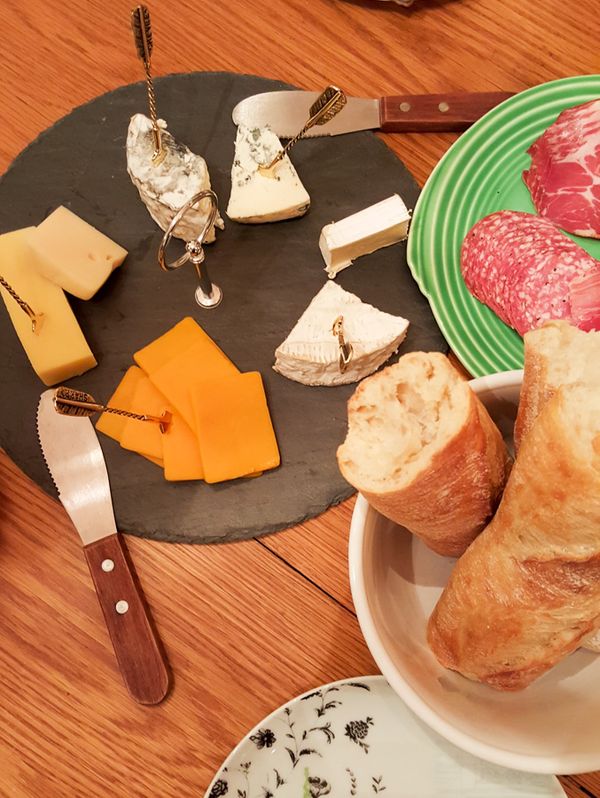 Katie gave me a nice slate cheese plate for Christmas, along with a book about cheese and beer pairing, so we've been tasting! I love the little arrow cheese markers! 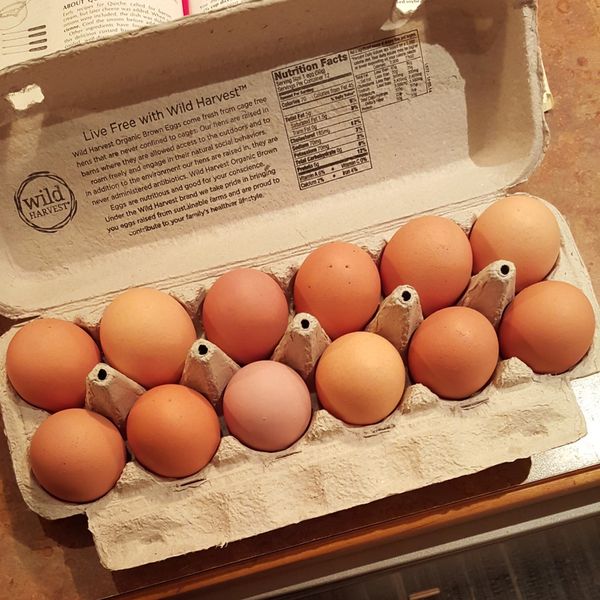 Opening a carton of eggs the other day to make quiche, I was delighted by all the subtle differences in "brown eggs."

I spent some time with family. I did some photography. There was some home improvement; cleaning, organizing, laundry. I balanced checkbooks. I shopped and cooked. I took it easy, did things as they needed to be done, and didn't stress out.

How about you? How'd you start the new year?

Your last paragraph sounds very much like my last few days. They were heaven, which made today all the more harsh. Rusty did a fabulous job of making the undersink look artistic. I've enjoyed watching Junah grow and change over the last two years. He's going to be a fire-cracker!

You (and Rusty) sure know how to start the new year off right! Your under-sink cabinet is a work of art; Junah cracks me up (great gloves, great kid!), and I'm off to look for a cheese plate and those cool arrow markers to give as gifts.

Happy new year! Looks like you're off to a great start. Beginning with water...good water!

We started the year with a beautiful riverside walk. Two days later, we were snowed/iced in. Come by my blog and see the pix!

I also frogged an old project and began a new one with that yarn. It's going to be lovely.

What a lovely start to the New Year! I use an old skein Tahki cotton (DK weight maybe?) for provisional cast ons. It is perfect because it is so smooth.

My husband can fix so many things in our OLD home and plumbing is his least favorite chore as well.
We started the year very quietly. As in we barely got out of our chairs! Lots of cable knitting for me.
Happy new Year

whew! I need a vacation just from reading about yours! glad you started the year off with family and fun...and look forward to seeing more about Junah's birthday (yikes, 2?! really!?) next week. xo, m.

Oh, my gosh! What a post! What a great start to your year. I love it all. We have hard water, too -- and the water softener does the trick . . . but doesn't taste so great. I'm interested to learn more about your new filtration system. I can't believe Junah is already two! What an exciting time. (And as for provisional cast-ons? I used whatever "other yarn" is in reach. . . )

Your Trip Mitts look great! I always feel like an easy provisional cast-on removal is a myth. How is that boy turning 2 years old already??!! And can he get any cuter?

So far so good with our water system! This is the one we bought. One of the best things about it was the trickle-down effect in terms of organizing and cleaning out! Same with our recently departed microwave!