Weekending: In no particular order
Ten on Tuesday: Kidnapped!

What a weird week last week. I was supposed to have last Thursday & Friday off -- a nice long weekend. 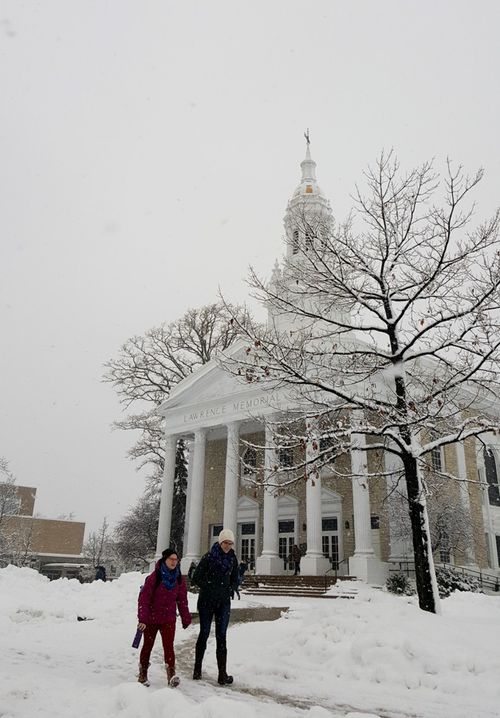 There was a much-hyped Tuesday & Wednesday snowstorm, though, and with Rusty being gone (he takes care of most snow removal), it was suggested that perhaps I'd rather have those days off to keep up. And, yeah... sort of, I guess, but other scheduling things came into play, too, so that I was ending up with most of Tuesday off and all of Wednesday and, well, that's not much different from a normal week.

I took Friday off, too, but it just wasn't the same, y'know? And, of course, the snowfall wasn't nearly as dramatic as predicted, either. Whatever.

I managed one session with the personal trainer last week, did lots of cooking, and also a fair bit of cutting, ironing, and sewing! 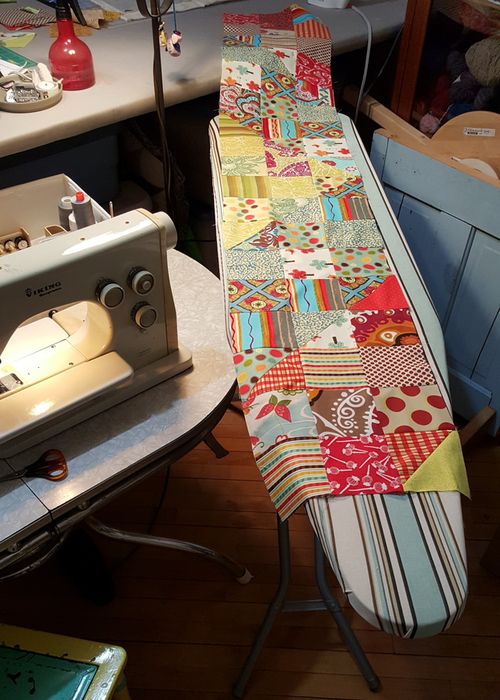 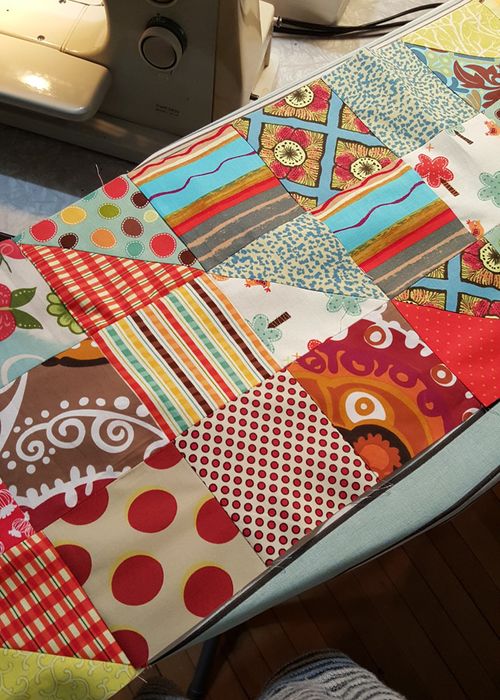 I had the majority of my Color Dive Quilt (in-progress) laid out on the front room floor for a few days... until Junah was due for a visit and I realized what a disaster that could be! I have three rows sewn together so far... it's very colorful! 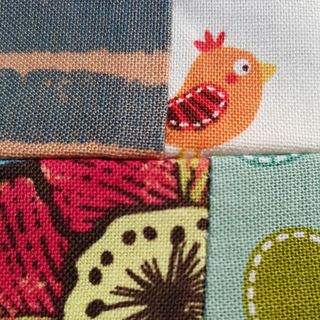 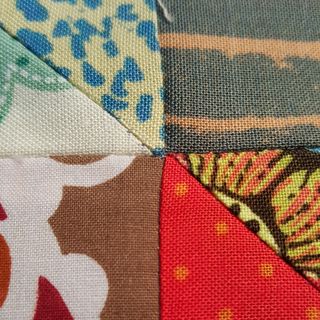 Some of my seams line up pretty good and some not-so-good! I'm learning. I also found that some of my fabric combos worked better than others, and have done more fat-quarter shopping in the past week than I've done ever! I think I can live with it now... I will live with it, because no more shopping!

Annie came on Friday afternoon and spent the weekend. The plan was to introduce her to hand sewing, Alabama Chanin style, in preparation for some skirt kits that are on order. We used some stenciled fat-eighths that I'd ordered a while ago for our swatches. 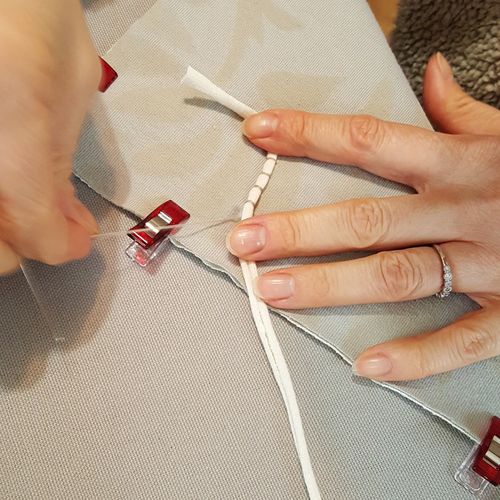 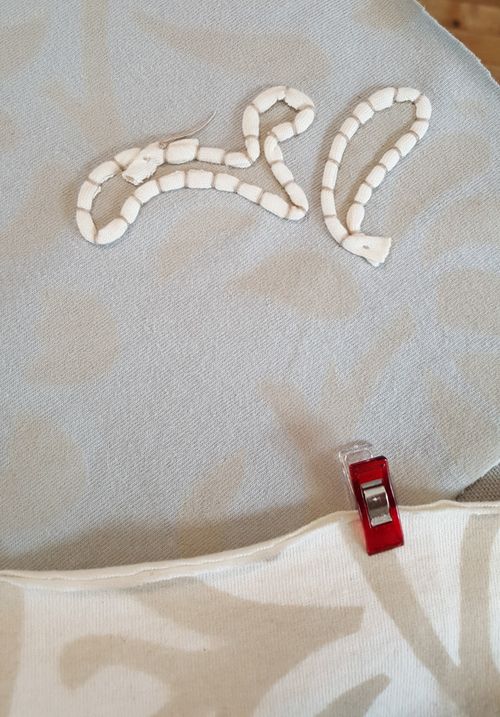 Within minutes, she was couching! She really likes the look of it and it's probably the technique she's going to use on her skirt. 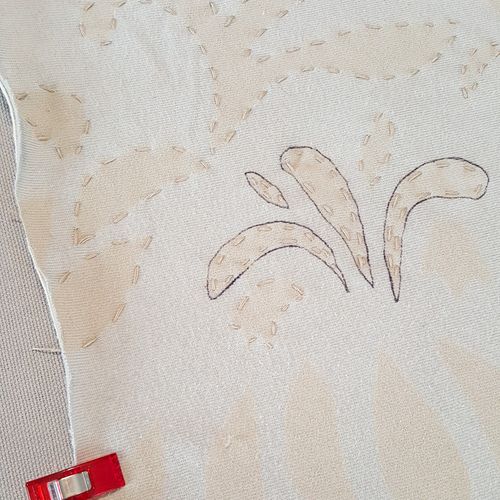 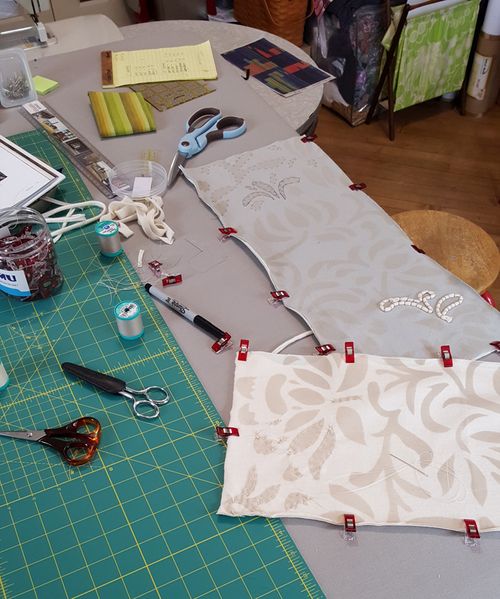 She tried some other techniques, too! 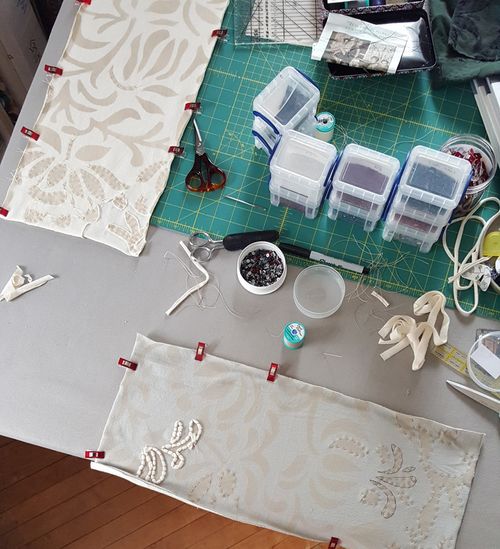 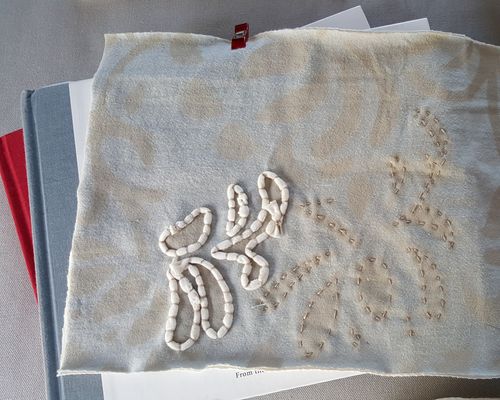 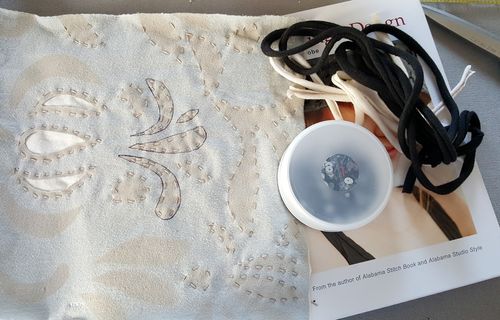 The beads & sequins also came out, and I sent her home with a selection of all, along with some jersey rope in a contrasting color for couching.

The possibilities are endless!

I worked "negative reverse applique" on my swatch, with both layers of fabric in the same color. 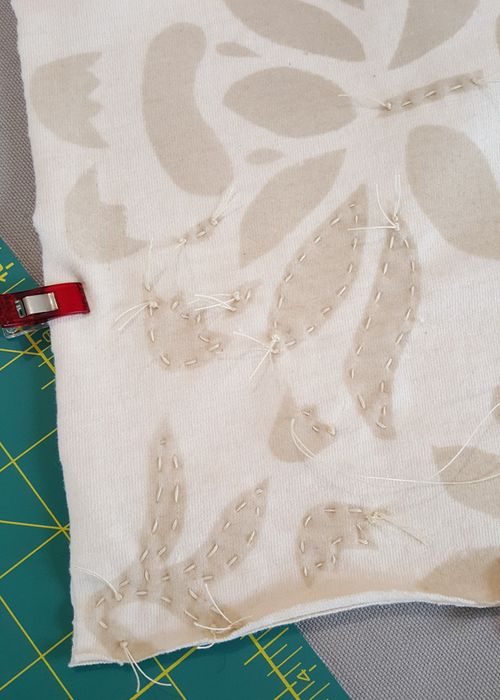 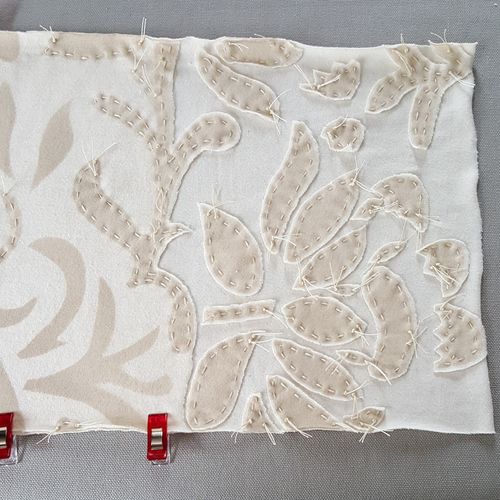 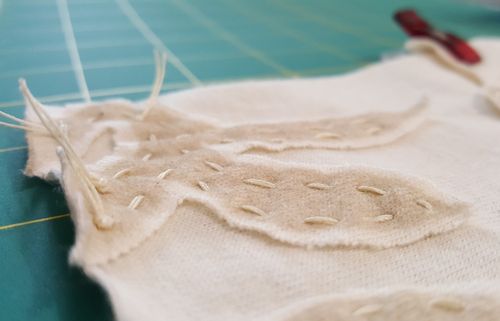 I will likely use this technique on my skirt, but the layers will be different shades of gray. 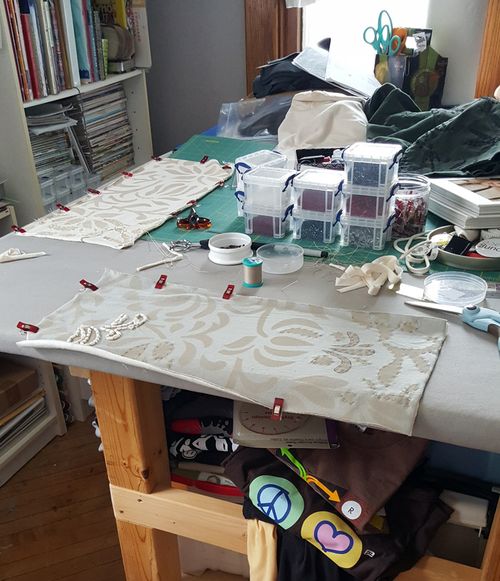 It was a super fun and relaxing weekend -- not as long as originally hoped, but fine!

Ann is smitten with the stitching! It's going to be several weeks before our skirt kits arrive, so in the meantime (next time we get together), we'll be cutting out and sewing an interim project. She reminded me before she left that she made it as far Advanced Tailoring in high school home ec class (I remember the "muslin" suit she made from some amazing floral bedsheets)... she's going to LOVE working on a garment!

What FUN! Stitching a la Alabama Chanin is so addicting. (You can't just do one thing. . . ) Love the colors of your quilt. So bright and just HAPPY. (And the weather people? They're almost never right. . . )

What a fun thing it must be to have a sister to sew and craft with. Your quilt is beautiful and will be fantastic!

It was easy to tell Ann wasn't a mere beginner. How cool to have someone who will stitch with you.
The quilt is a riot of color and pattern! It has a certain charm and is very, very fun!

I love both the colors and prints (that cute little bird!) in your quilt, and your seams line up pretty darn well to my eyes. And your AC-ing! I hope you'll share your future "stitching bees" with Ann so I can admire your stitching, projects, and skirts.

Though I'm sure I'll never do it (maybe in retirement) those little tubes have me curious to see what the heck they do! Everything looks so wonderful!