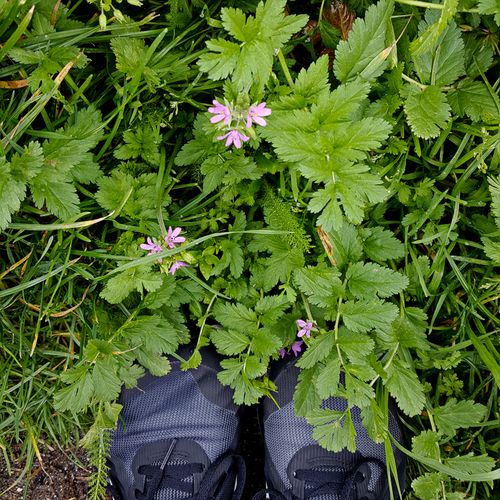 I found a little spring on the West Coast last week. Sadly, no photos of the flowering trees that I saw now and then, nor of rhodies. The only other place I've seen rhododendrons so marvelous and huge was in Ohio when we visited Sharon there once. We had a giant red rhodie outside our house at Cape Meares back in the day. Gorgeous.

The 1st Day of Spring means it's the anniversary of the blog! Twelve years ago, I typed some words and hit "publish now." Since then, I've written 2850 posts and received nearly 25,000 comments.

Various pages hereon have been viewed over 1,050,000 times, mostly from within the U.S., but also from Canada, U.K., Australia, Germany, France, Netherlands, Japan, and Norway. People land here by searching for "knitorious," "roasted tomato sauce," "red are strawberries song," and "Alabama Chanin." They also land here from other blogs, such as Mason Dixon Knitting, Zeneedle, Carole Knits, and January One; from blog readers and other sources such as Feedly, Bloglovin', Ravelry, Facebook, Twitter, Pinterest, Instagram, and more.

Blogland certainly has changed in 12 years!!

I've changed, too. I quit smoking (11 years as of last Thursday), my kids have grown up; I became and aunt again (x2), a mother-in-law and a grandmother; and I've lost loved ones, including my mother, sister, grandmother, uncles and cousins.

I've knit like crazy, sewn as I never dreamed I would, dyed yarn & fabric, and even made a quilt with my daughter (and started another on my own).

I've traveled! Often within WI and the U.S., twice to U.K., to Mexico, and even to Brazil. I've had the craziest good times meeting up with other knitters/friends in various places.

Mostly, I feel that I've been empowered by blogging (reading blogs as much as writing a blog) to explore more, to be more adventurous -- it comes from here, a knitting blog, but spills into all areas of my life.

Though I've been a bit scarce of late, it's sure been fun! We'll see how Lucky 13 turns out!!

Thanks for reading and dropping a line now and then.  ;)

P.S. Though I haven't been doing much knitting lately, either... it's SPRING and that means time for Romi's Mystery Shawl! The first clue was released last Friday and, while I have my pattern, I still haven't decided on yarn... but I will. Also, still planning my Habu boxy top!

Happy Spring and an even Happier Anniversary! Those are some incredible numbers of posts, comments, and views, and even more amazing is how you have a chronicle of your life changes, directions, and travels. I love that it has empowered you, and I know my life is much better for reading what you've written. Thanks for sharing for 12 years, and I hope the next 12 are filled with even more knitting, AC, quilting, traveling, beautiful photos, empowerment, surprises, fun, and creativity!

Blogland...so different! But, we're still here. Are we the last of that era? It has been wonderful to get to know you, to watch as your life has changed and evolution has happened. I can't believe all the wonderful travels I've taken through your eyes, the crafts I've enjoyed watching you create (and I've started because of you), and the friendship we've nurtured. Happy Bloggiversary and here's to many, many more!!

Thanks for great reading and taking us along on your adventures. It's been a pleasure!

Also, if you are ever in the SF Bay Area I would love t meet you.

Happy Blogiversary! I think I've been reading your blog for about 5 to 6 of those years. I rarely comment, but I've enjoyed following your crafts, your travels and your family. I hope there will be another 19 years of blogging.

Happy Spring and Happy Blogaversary!! I'm so grateful for this online community that fosters creativity and friendships; and I'm glad I found you! Cheers to another 12 - and even more!- years!!

It's always a pleasure to visit you here on your blog and I'm so glad I've met you in real life, too. We've built a wonderful community together - based on knitting yes, but now incorporating so much more. Happy Anniversary!

I love your blog and your family and you!

Happy Blog Day, Vicki! I've been reading since the beginning (how can that even be???), and have grown to love you, your family, Wisconsin . . . everything! Thanks for sharing -- and for being there. XO

I have truly loved blog reading and yours is one of the first ones...I won't go into these details of why I was on the internet a lot at one point, but it was a saviour for me (and my family to the extent that it helped keep me grounded and focused on things of which I had some control). Keep writing when you can or when you want to...so glad you started and keep with it...:). Blog land...The friends I feel I have with never having met them in i

Happy spring & Blog anniversary. I'm also glad to know that I'm not the only one behind on Romi's shawl. Travel and not loving the yarn choices in the stash mean I won't get started till Sunday at the least.