My sister leaves for Spain a week from tomorrow, and the boys a few days later. "Crazy" doesn't even begin to describe what's been going on: cleaning out, donating, selling, storing, deciding. Does it get packed? Does it stay? Does it go?

Add in the simultaneous family farewells and at least one trip to the consulate in Chicago! Cray-cray! 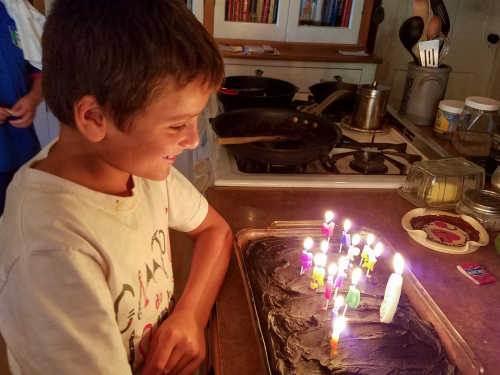 Meanwhile, Addy had a birthday last Monday! He was worried that it would be forgotten. No flippin' way! They happened to be on their way home from Madison that day, so we made plans for dinner. I set up a taco bar, which the kids loved. And baked a cake. Addy requested chocolate, so chocolate it was... one of the chocolate-iest cakes I've ever made. Seriously, the frosting looked like tar! It was so awesome. (Hershey's Special Dark cocoa is the secret ingredient -- recipe on the container. I used a 9x13 pan and baked it about :10 longer than specified. It was perfect.) 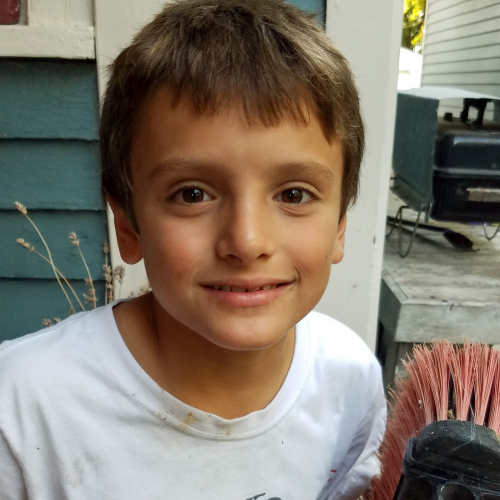 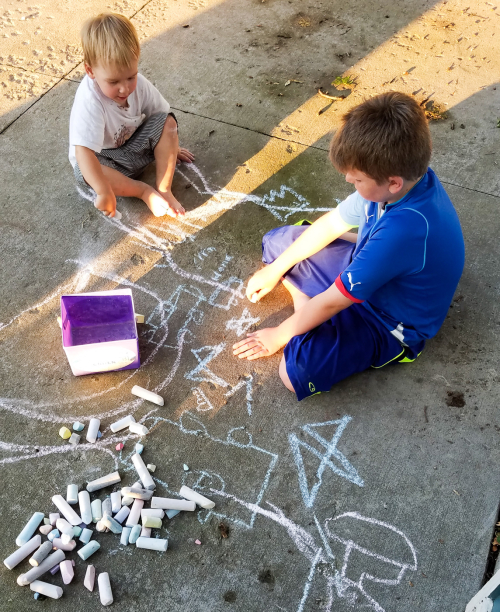 We'd had another Aunty Camp scheduled for later in August, and the boys were both very concerned that it wouldn't happen at all. I was able to arrange my schedule a little bit, though, so they stayed overnight on Monday and we had "camp" on Tuesday morning!

We did "tie-dye" with Sharpie markers & rubbing alcohol. 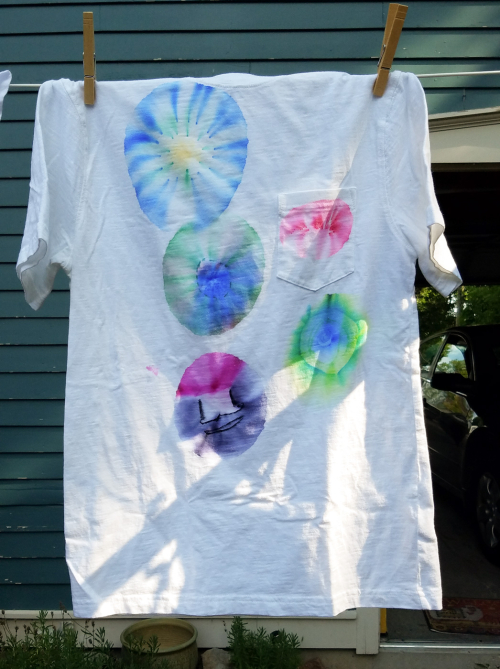 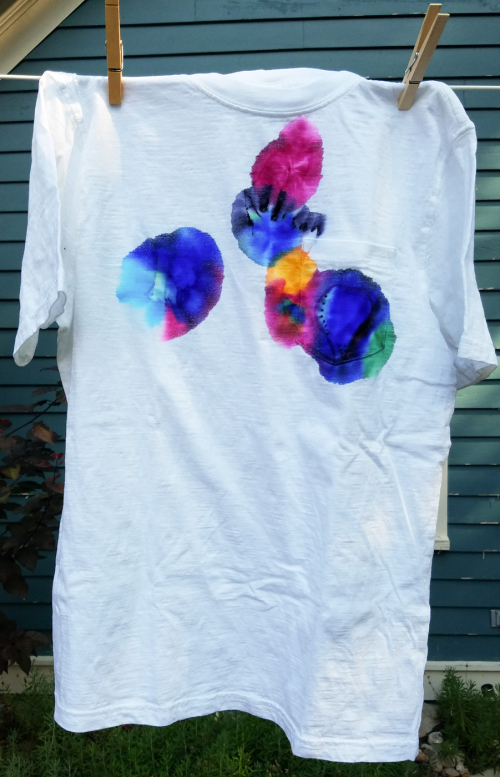 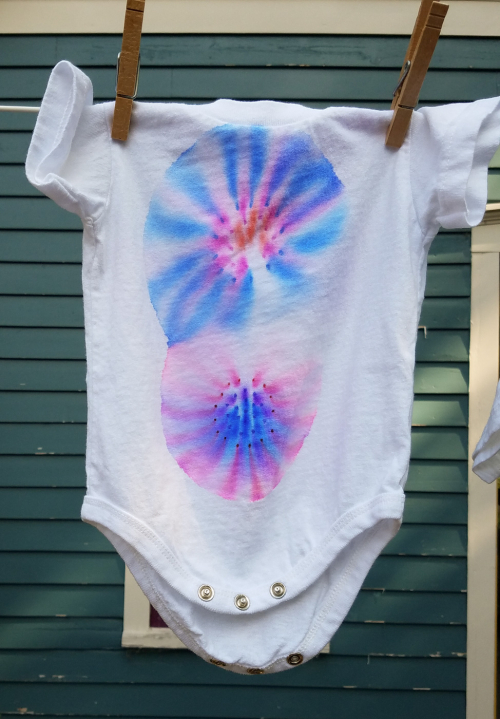 From the top: Mack's, Addy's, and a onesie that I made for Gin.

I wasn't intending for indigo dyeing to be part of this camp session, but the boys really wanted to do it. I had just enough time to mix up a quick 5-gallon vat while the t-shirts spun around in a hot dryer to set the ink. 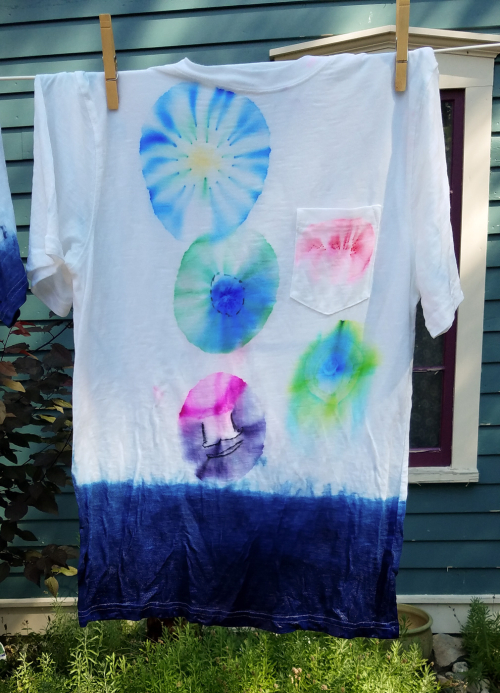 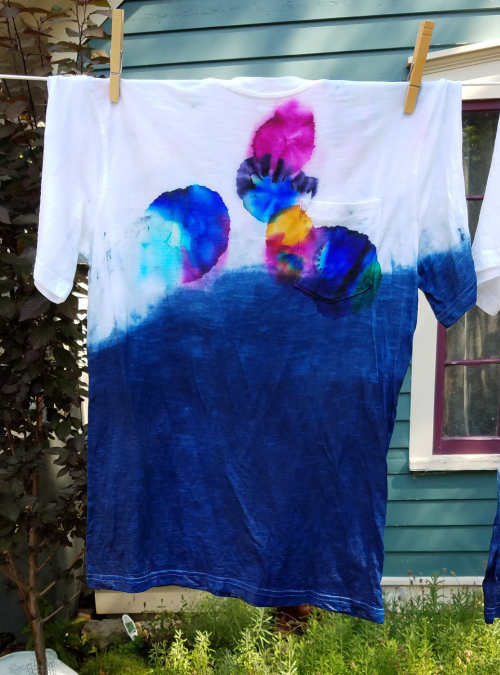 And then threw them into the washer on "quick cycle." They are wet, above, and the color a bit intense because of it. 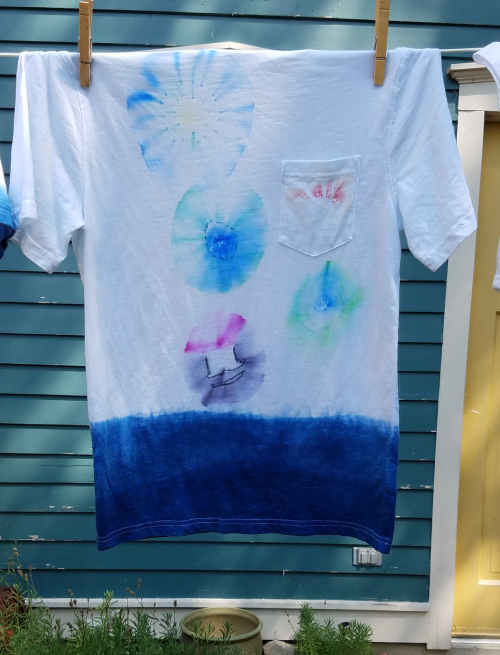 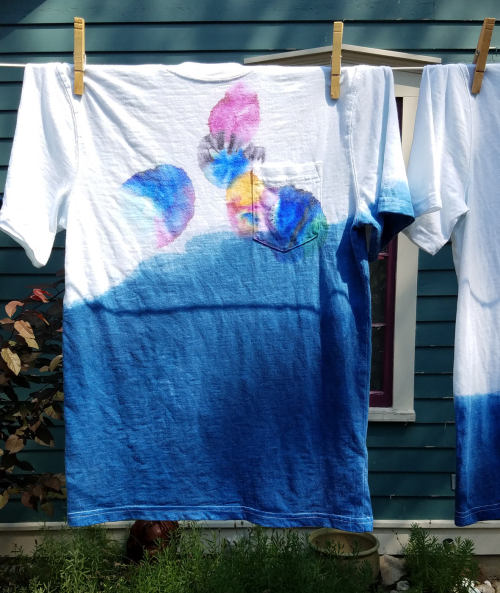 In a perfect world, I'd have let that ink set a bit longer -- or maybe set it with an iron -- because it did fade some in the washer. It's still pretty cool, though! And the boys were so happy. 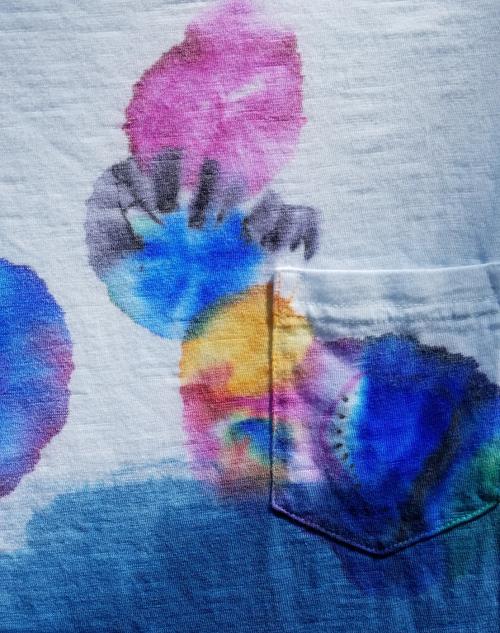 Detail of Addy's marker designs. He wasn't happy with how his name was working with the marker, but it turned out to be a wonderful element of the design!! 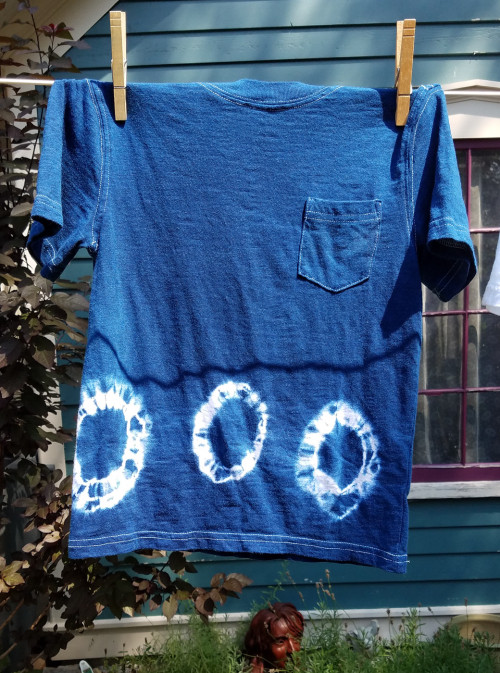 They also tie-dyed a shirt for Jün!

I had previously done an experimental project on my own to get a feel for the Sharpie thing... and it turned out pretty hideous! 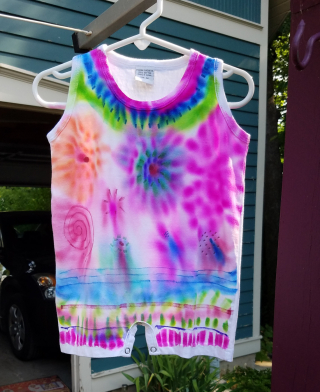 Thankfully, indigo to the rescue!! 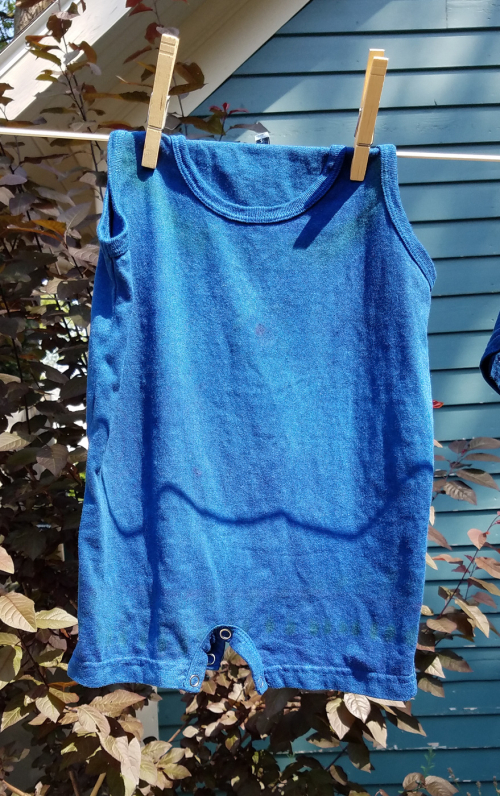 There's already been some discussion about the next Aunty Camp! Who knows, maybe it'll be in Valencia! Based on discussion, it appears that indigo is an integral part of Aunty Camp, so I reassured the boys that we could do that anywhere! And they also request the return of knitting. LOVE! 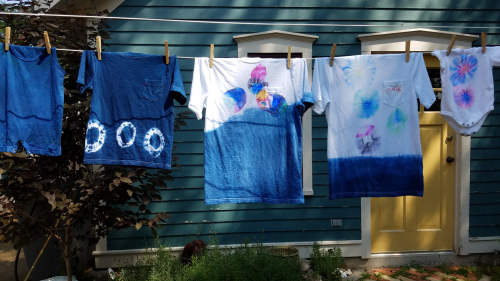 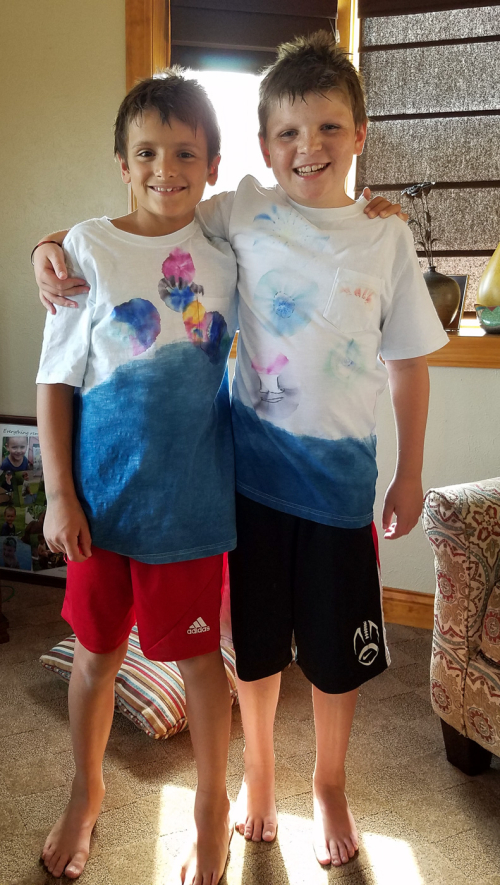 Nine and Eleven!
(I can hardly believe that.)

Oh, you've clearly given those boys creative power they might not have found on their own. Their projects are so great, perhaps the result of more excitement in doing and less of the adult "will it turn out right" thinking. You're gonna love visiting Spain. I mean, you'll be going, right?!

I'm so glad you all did Aunty Camp, even with all the craziness of the move! The boys' shirts are so creative; I see morning glories, fireworks, jellyfish ... and the indigo really looks great. I'm going to look into that Sharpie/rubbing alcohol technique myself. All the best to your sister and the boys as they embark on their new adventure. Time to start planning your visit!

I am so glad you got to have Auntie Camp! I can only imagine how much you will miss them but at least Spain is a great place to visit.

Nine and eleven!? Oh my kids do grow quickly. I am completely enthralled with Auntie Camp! Wherever the next one is we certainly want to see pictures. The boys do awesome work!

Auntie Camp + Special Birthday Celebrations = the best memories ever! What fantastic times you all had! And, I think a Valencia edition of Auntie Camp will be the most amazing thing!

Love it!! Such a special time for you all.

I wanna come to Aunty Camp, too!! (especially if it's in Valencia :-) I think Jün is going to miss those boys the most. what a wonderful relationship they've developed!