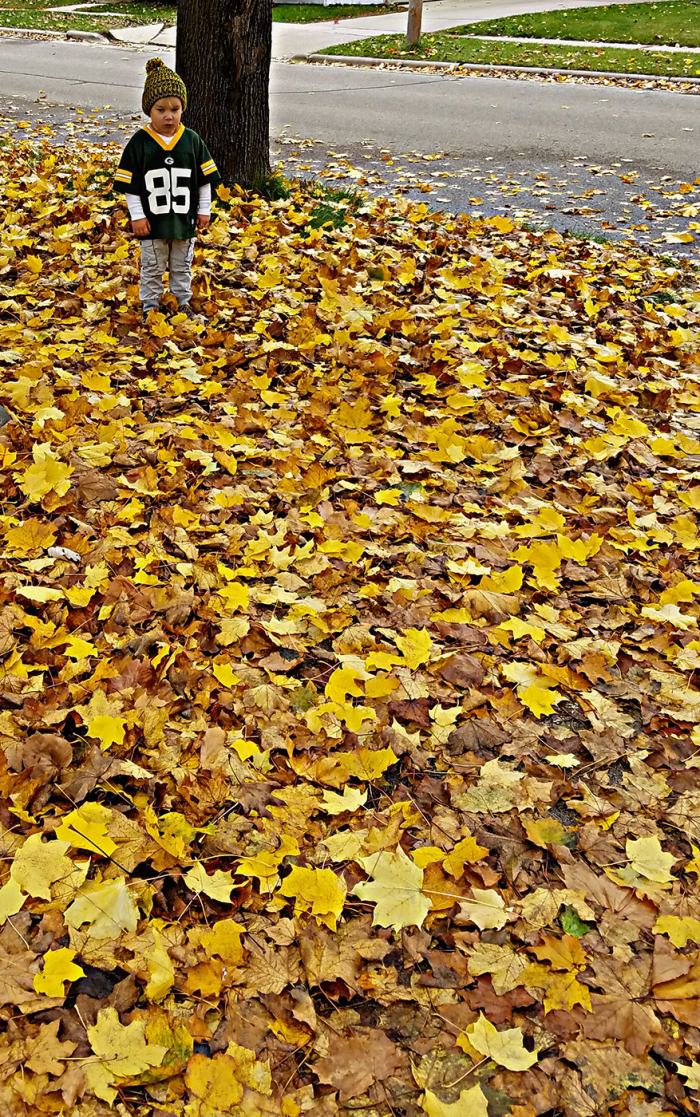 That's a lot of leaves!!

Acknowledging... That my birthday, which falls just two days before Election Day, is going to require some serious attention and damn good mojo.

Anticipating... Election Day! While I doubt the madness will end, it'll at least be... the end of something. I can't complain about the ads because I don't watch live TV, and I use NoMoRobo to curb the unwanted calls and soliticitations, but FB is full of it (and I admit to getting caught up a bit... sometimes...). Mostly, hopefully, GOD PLEASE PLEASE PLEASE, I am anticipating not having to even think about the possibility of Donald Trump as our president. I do not understand it one single iota -- never did, never will -- the man is as unfit for office as he is disgusting.

And that's a lot. /sorrynotsorry /iamfinishednow 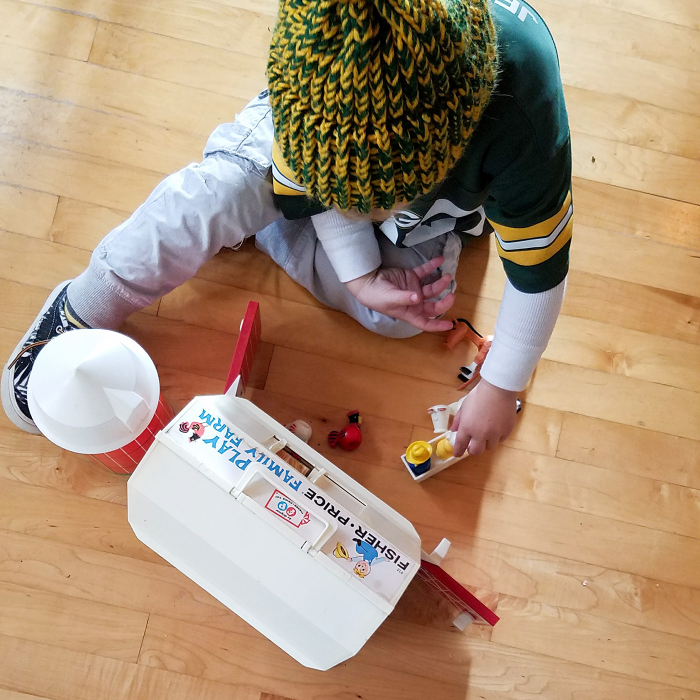 Delighted by... Junah playing with an old Fisher-Price Family Farm that my mom had. It's been in my trunk for months... but Jun came grocery shopping with me yesterday and he spotted it when we loaded up the groceries! We brought it in the house and he played with it for quite a while -- first on the kitchen floor, then in the living room. Then we played "jump" -- where I sit in my chair and he stands on my footstool -- bounce & JUMP! Then we played with "circles" -- an old Discovery Toys game -- and then he was goofing around and bonked his head and wanted to go home... or to the farm. ?? His other grandparents live on a farm and I thought he was telling me that he wanted to go home or to the farm... which is fine, because they're amazingly great and wonderful people (love you, Bob & Kathy... but REALLY, Junah??). Heheh, he wanted to take the farm home with him! And so we did.  ;) 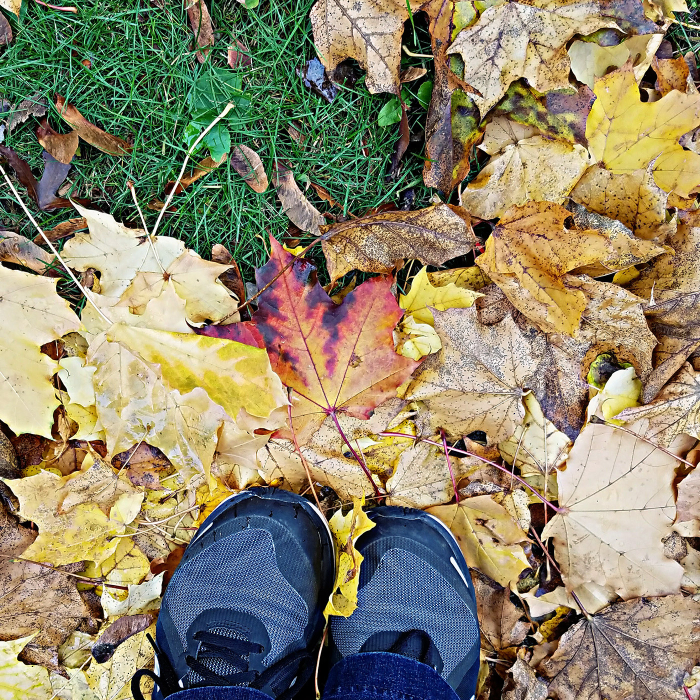 Knitting... Squad Mitts and some stealth Christmas presents for the kiddos. I would likely have a pair of mitts finished had I not gone full-on AUTO and knit well beyond where I was supposed to begin the thumb gusset on mitt #2... so a little rip & re-knit was in order. Back on track and for sure tonight! It is definitely getting to be mitt season, and I like that these are in fingering-weight yarn.

Looking forward to... WINTER! For the simple reason that it marks the end of road construction around here. OhMyGOD, it has been something else this year. 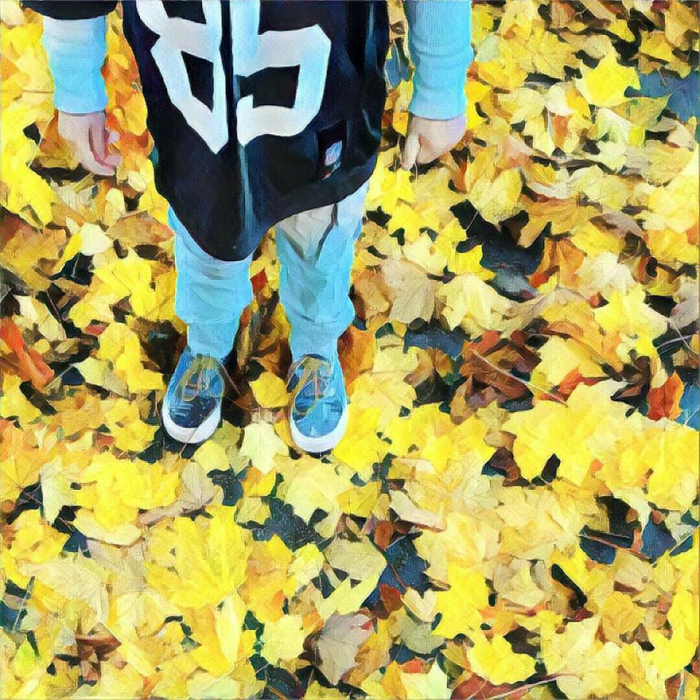 Planning... NaBloPoMo! Call me crazy, but I can't NOT do it after all these years.

Reading... PAGES: Room... making progress. AUDIO: The Time Traveler's Wife -- that's a long book -- I'm about half-way. I've been enjoying it, for the most part, but they just got married and I've rolled my eyes a time or two... I should stick with it, right?

Sewing... Hopefully soon. I've had some fabric for a while now to make new window treatments in the bathroom. 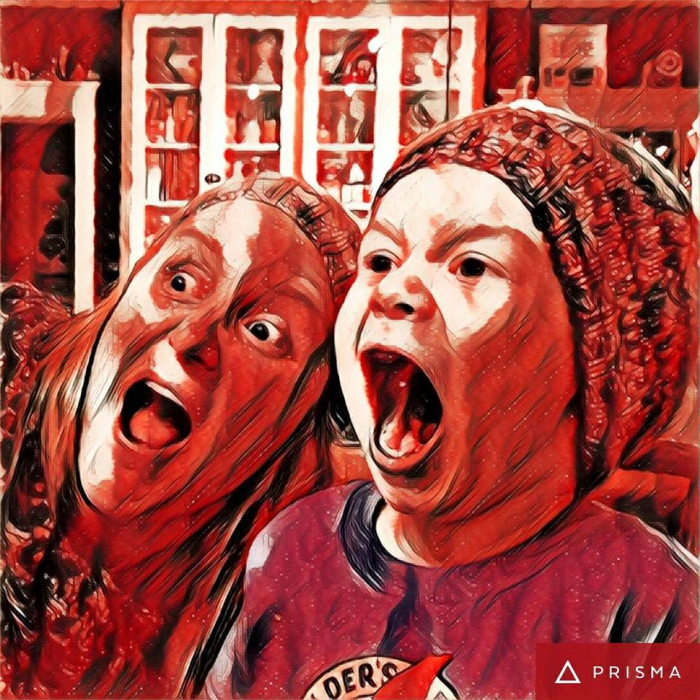 Time Traveler's Wife is one of my favorite books ever, I hope you will stick with it. And Room, isn't it just so so good? Couldn't agree more on Trump. The man has never held an elected office EVER and yet people think he's qualified to be POTUS? And that's not even taking into consideration how utterly despicable he is.

I'm with you all the way about the election. I never finished the Time Traveler's Wife, maybe the audio would be a good idea.....

I read Time Traveler's Wife so long ago that I can only remember the basics. But I think I liked it? I am just numb from all this election . . . stuff. I am so ready for it to be over! (And I cannot fathom the entire Trump thing. Just . . . can't even begin to get my head around it.) Have fun with all those leaves. I'm sure Junah will be a big help!

I am in agreement on the election and Trump. I am so ready for it to be over. I will cast my vote with great joy next Tuesday for Hillary! I am ready for the weather to be consistently something - not 70's one day, 40's the next. lol

I have to focus on Junah, the FP farm, lovely leaves, and good birthday mojo, because I feel the same way about Trump and am getting seriously concerned that it might be a real possibility. If so, I hope you'll join me in the knitting commune in Canada. I'll be honest, Time Traveler's Wife was not one of my favorites (too long and lack of character development) but ymmv, and I've been afraid to read Room. I'll be interested in your thoughts!

So with you about the election. I'm an election official and work at the polls all day. Usually I look forward to it big time, as several of my close friends work the polls too, and I knit all day while I tend the ballot tabulator. But this year...ugh, I just want it OVER. I want to put on a celebratory pantsuit and dance in the street next Wednesday!
I'm doing my annual stab at NaBloPoMo too, maybe this year I'll succeed....I look to you for inspiration .

Happy Birthday a little early. I am so with you on this whole election mess. Cannot wait for it all to be over. We were away over the weekend in a different part of the State that is so obviously pro-Trump it was actually a bit frightening. I read The Time Traveler's Wife, but didn't really care for it all that much. Have not read Room...looks interesting, but have read very mixed reviews about it. Curious to hear/read what you think.

Counting the days...and I believe my husband and I are going to just x each other out. (I. Don't. Get. It.) (Not that he's a fan he's just so anti HRC.) I've never read the TTW but I did read room and enjoyed it. That scream photo is the best!

Next Tuesday can't come soon enough! I'm with you. Wish I could find that FP farm we used to have. Hannah would love it. Love Junah Green Bay hat!

Today I'm all about everyone dressing up and ignoring the world. I just can't stand what's happening to our country. Room was a fantastic book, but I'm not a fan of TTW or anything the author has written. I'm going to love NaBloPoMo as I'll have lots to read, but it's just not for me.

I watched Room this weekend. Wow. And: you share a birthday with my oldest sister! Yay Scorpios!

What Margene said.... I'm looking forward to NaBloPoMo so I'll have LOTS of blog reading to do!

Early happy birthday. I'm in NY so I'm getting to see autumn, no fall in FL. I hated the Time Traveler's Wife. It seemed cruel to me. Junah is so grown up.

Tomorrow, my DH and I head to the city hall and vote early. Then go home and cross all of our fingers and toes.

I cringed when you started to write about the election. I thought , oh please, oh please, don't let her be a Trump supporter. Whew! Dodged that bullet. I read both Time Traveler and Room. I liked both. I have many found memories of our daughter playing with her FP farm. Love your Halloween photo!

Reading this post makes me smile because - we agree about the election (it's hard to tell these days, isn't it?), you have family vintage toys in your trunk and then Junah loves them, and you're knitting and reading - TTW is one of my favorites, but it's been years since I read it. I hope it stands up and I'd certainly encourage you to stick with it! also Prisma - that Halloween filter was a lot of fun to play with!

omg, I plan to completely collapse after election day. I have put in ~200 hours since August 1 (yes, I keep track of my volunteer hours; please do not judge) focused on this election. Local campaigns, state finance reports, running the county party's Twitter account, planning and hosting a large fundraiser party for two candidates, and staffing our county office 5 days/week since Labor Day -- whew. Although I don't think we can necessarily take back the state legislature, both of my local candidate have a fighting change of ousting the nasty incumbents.

Trump: I can't even.