Day 3: With the random already!
Fall back! 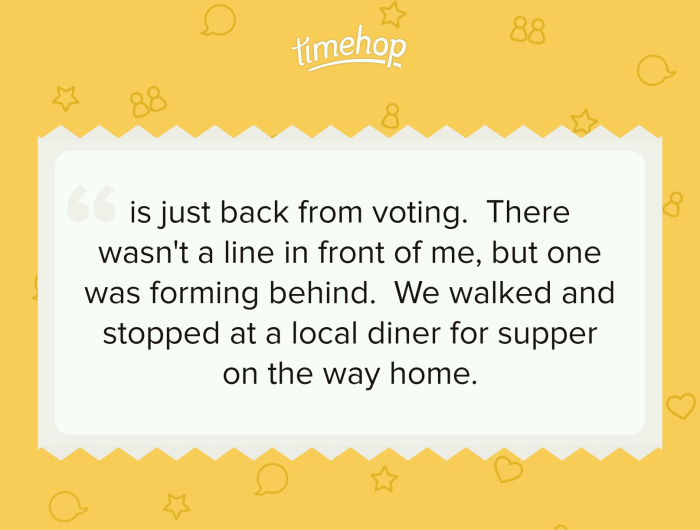 That's the day we elected Barack Obama as President of the United States -- our first-ever African American president.

Fingers crossed for Tuesday and a win for Hillary Clinton -- the first-ever woman to be elected president!

Have you seen THIS:

Pre-ordered this morning with two bonus tracks available for immediate download! I hope, hope, hope that when the full "mixtape" is released on 12/2 that I'll be able to buy it as a gift for Maddy -- it's PERFECT! Even in NZ, she is crazy about Hamilton!!

I will also be crossing my fingers and fervently hoping for a Clinton win. I can't imagine Trump will just go away quietly, but the specter of a Trump presidency has me incredibly concerned. I hope my nagging worried stomachache will be relieved on Wednesday.

My fingers are crossed for Tuesday, too. I want a clear and stress free victory for Clinton and I want Trump to fall off the face of the earth.

Fingers and toes and everything else crossed. Scary times.

Anxiety, anxious, distraught (at times), hyperventilating if I hear ANY news and, at times, feel ready to throw up. I voted two weeks ago and I hope everyone is allowed to vote on or before Tuesday!

fingers and toes definitely crossed for Hillary (and for a calm and peaceful concession from the other party!)

I have had to completely check out of television, Facebook, even NPR. I am simply TOO stressed out by all of this and can't bear to hear another super-sensationalized story. Looking forward to VOTING on Tuesday -- and keeping everything I can cross crossed. XO

I had such a lovely conversation with our favorite farmer from the farmers market, who has become a very dear friend. In his last weekend of year and as he prepares to head home to Oaxaca - he said to us, you know - where those bad hombres are and smiled. I assured him I would be voting for the candidate who was in opposition to a wall and who felt that our greatest asset as a nation is the beautiful and rich diversity we have here. He said he'd have room for us there if things down there if things don't work out as I fervently hope. A better invitation could never have been offered. PA does not do early voting, but I will be there to cast my ballot on Tuesday, yes #ImWithHer!