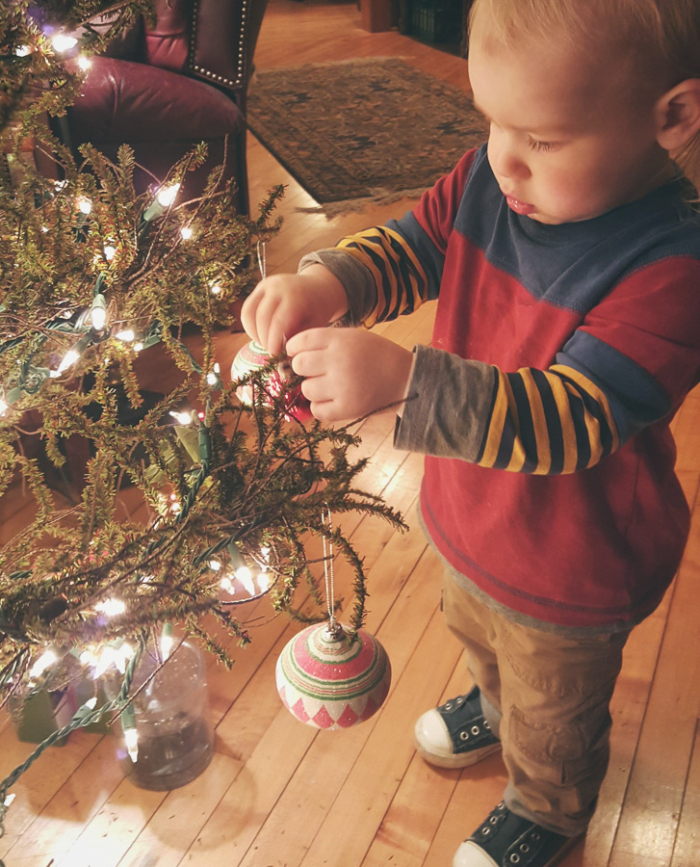 Whenever I think to myself, "Hm, do I really need to put up the big tree?" I think of how much fun this was. And if it was fun last year, it's gonna be even funner this year!! Yes, FUNNER!!

I was looking ahead/steeling myself to the dates later in the month and then was reminded first thing this morning that it's Rusty's dad's birthday -- he'd have been 88.

Kate shared a story about a frustrated, insistent customer who ended up leaving the book store in tears yesterday. I got tears in my eyes right away. Ohhhh, that woman has a story -- there's a reason why she's insistent and on-the-verge, why she needs things RIGHT NOW. Poor things -- the woman and the book store employees, too; they were all a little stunned.

I'm going to knit myself a peace this month. I wrote about Project Peace before, but then the pattern came out and it's one of those long, in-the-round cowls and, well, there's nothing "peaceful" about that to me. So, even though I'd read along everyday, I decided not to knit the cowl -- or perhaps to designate another project as my "peace" knitting.

I said as much to Kym. And she said, "Doofus, you could convert this one to straight needles pretty simply! Just cast on for the width and then knit back and forth until you’ve got a long enough piece. Then just... 3-needle bind-off!"

She didn't really say, "Doofus," but I know she was thinking it. Haha!

I guess I needed a push. So I did the tiny bit of math, got excited about knitting an i-cord edge as I go -- in a contrasting color because, lo & behold, along with the 500-yard hank of Jill Draper's Esopus, I also bought a contrasting 250 -- like it was meant to be -- and, yeah, so I'm back in.

UPDATE: My mods for the Project Peace Cowl can be found on Ravelry.

I know Kym would never call you a doofus. Glad you worked out a place to knit the cowl!

I kind of wish Kym had called me a doofus and alerted me to the back and forth then 3-needle bind-off, but I've got 318 stitches cast on and I'm not ripping them out now. I do think your way was meant to be and am anxious to see the contrasting i-cord. Even more so, I'm anxious to see funner photos of Junah and Gin this year!

Love the Juno Joy above! And how nice via Kym that you could find a way to knit some peace this month with some mods. I was going to knit it too, but....... like you I kinda bailed. Off to rethink.

Three needle bind off is always a winner for me! Maybe I'll go look at that Project Peace. But not to knit it, just for peace.

I'm not putting up a tree this year. The new kitty is a party on paws, and it's just not a good idea.

Oh I am so relieved that someone else thought the cowl was not as peaceful as the idea. I started but with the "join into a round" on 318 stitches, it got terribly twisted and yada-yada-yada . . . so, I stopped, rethought my peaceful moment and changed to a smaller length and shorter width.
Your input has given me the right amount of peace to continue, thanks!

Kym always has the bright ideas. The contrast i-cord edge will be lovely (and fun!). I've decided to peacefully knit the socks I already have started. I am so happy we'll have the treat of watching your tree come to life through the tiny hands of your Grands! xox

I'm getting ready for Charlie to help me with our Big Tree on Tuesday... hoping for FUN! and I love how you adapted the Peace cowl to work for you... (I think I'm going to knit something else entirely - a piece I cast on a while back that just needs a little attention to be back to a peaceful place). Happy December!!

You are going to get great joy from that tree I predict! And no, you know Kym would never say doofus. :-) I'm trying to decide to icord or not to icord. We shall see!