We definitely had a White Christmas! 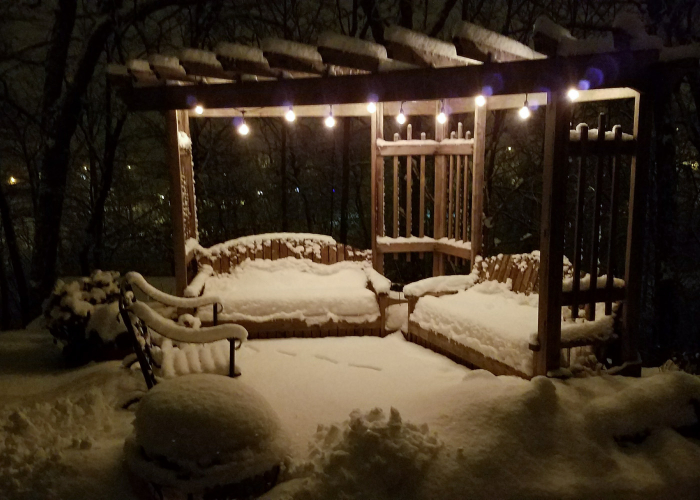 Most of that has already melted, thanks to a little rain. 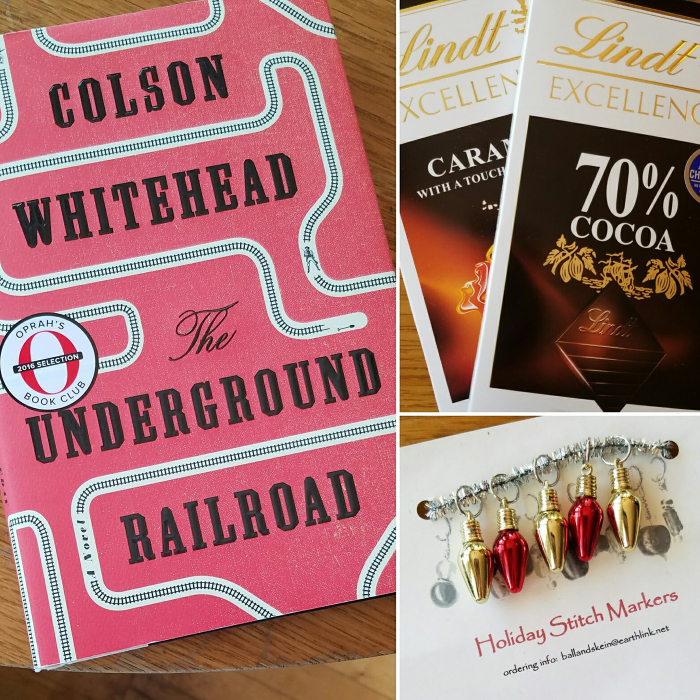 I had a wonderful Jólabókaflóð gift from Judy year. Aren't those stitch markers adorable? This traditional, annual (two years in a row for us now!) book & chocolate gift exchange was once again organized by Susan!

I can't wait 'til next Christmas!! 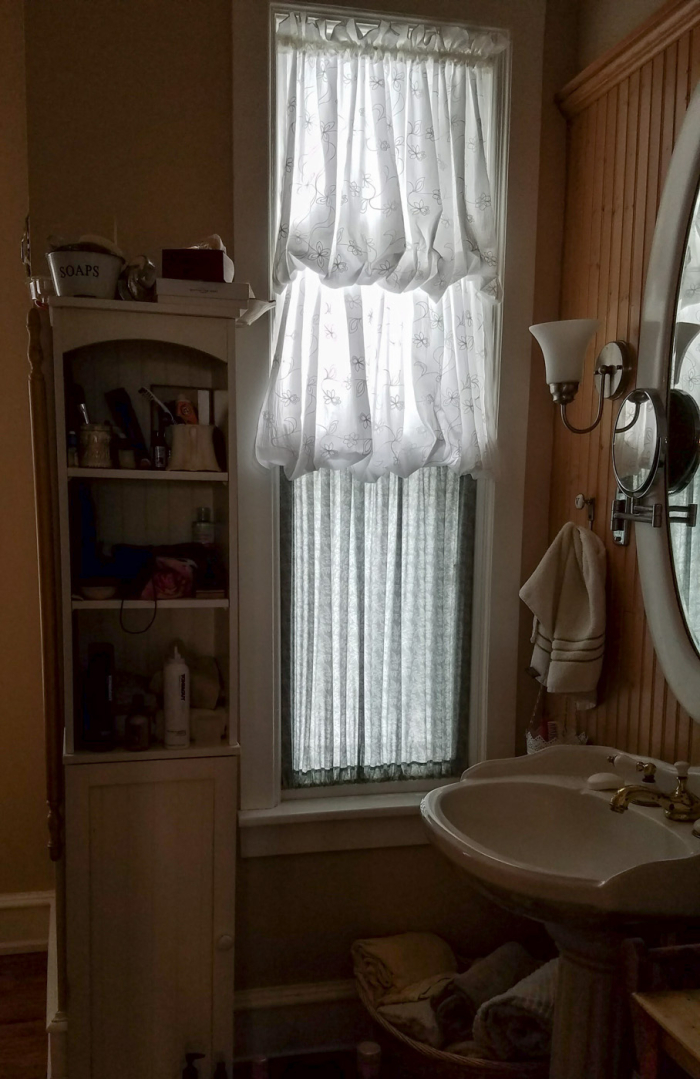 I cut the panels for Part 2 (the bottom half) of the bathroom curtains project, and sewed up the first panel on Christmas Eve Day... because that's what I wanted to do! There are a million other things I could/should have been doing (working on/finishing presents for Gin & Jun, for one), but here you are. 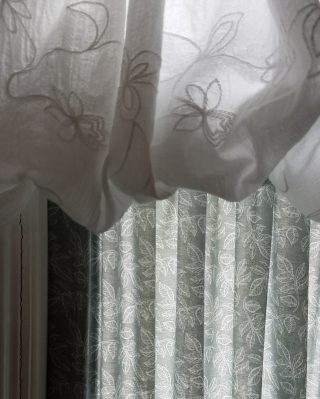 This is a very different look... and much "cooler" in temperature. The light in there is pretty amazing now! I still have to piece & sew the panel for the other window -- maybe on New Year's Eve Day! There will be a bit of fabric leftover and I think I'm going to make a pretty dress for Gin -- she'll be just like the Von Trapp children, roaming about in drapes next summer. Heheheee. 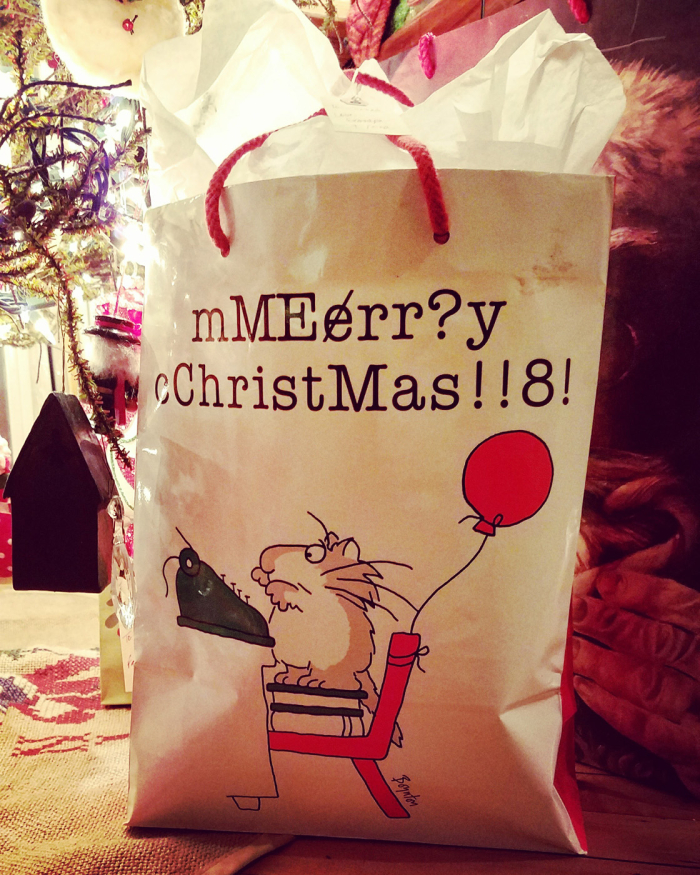 I finally buckled down and got some "wrapping" done... I went lazy gift-bag style this year! I've had this old Boynton gift bag in my stash for a long, long time and finally busted it out for Jun's presents this year. (And it's back in my stash once again!)

I sure wasn't thinking, because Junah was all about "unwrapping" presents this year, and the gift bags just weren't doin' it for him!

It was just Kate, Rusty, and me for Christmas Eve dinner, and we went all out. I'd receive a nice grocery gift card from my employer this year, and used to it buy a couple of good-sized lobster tails. Kate made some Saffron & Mushroom Barley Risotto (Mark Bittman's Kitchen Matrix), and we roasted some asparagus. 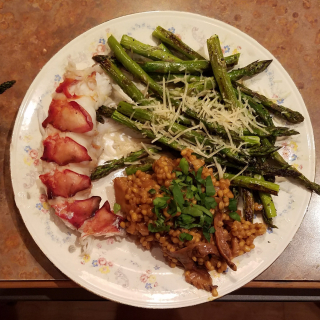 Oh, my, but that was good... And there was a half-tail leftover... enough to make a Lobster Bisque! 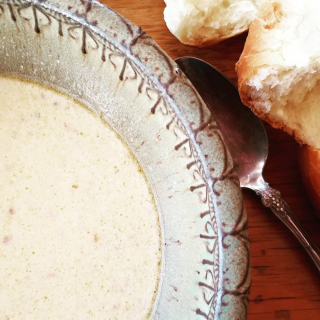 On Christmas morning, I checked the amaryllis. 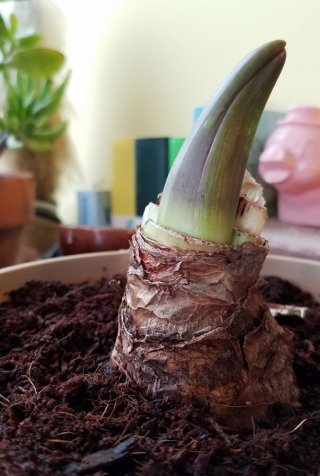 There's been some obvious growth... 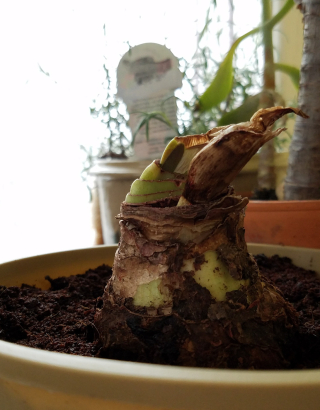 ...but the award for Most Improved goes to this guy! It might not look like an award winner, but there's vast improvement in color and, well, let's say "tone."

I was just about to get the Christmas stockings hung and filled... (I know, and it still hasn't happened!)... and the kiddos arrived! 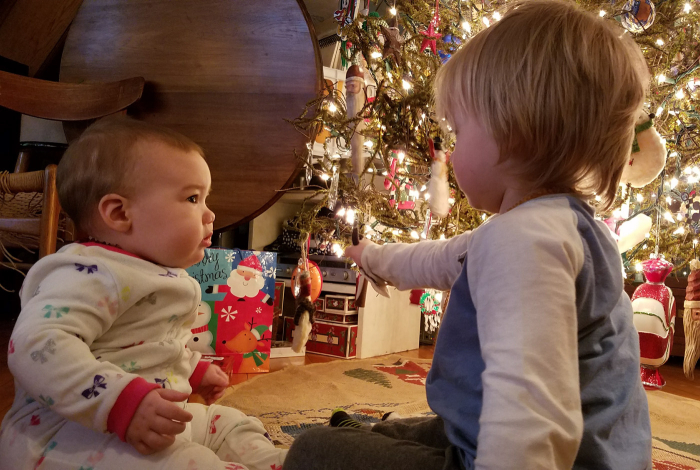 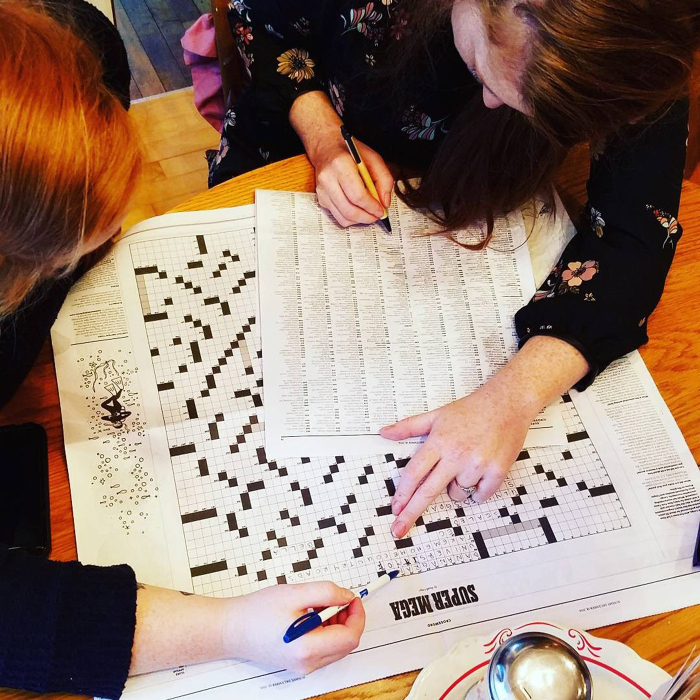 Another holiday, another mega crossword puzzle! The New York Times had an entire section devoted to puzzles this season. 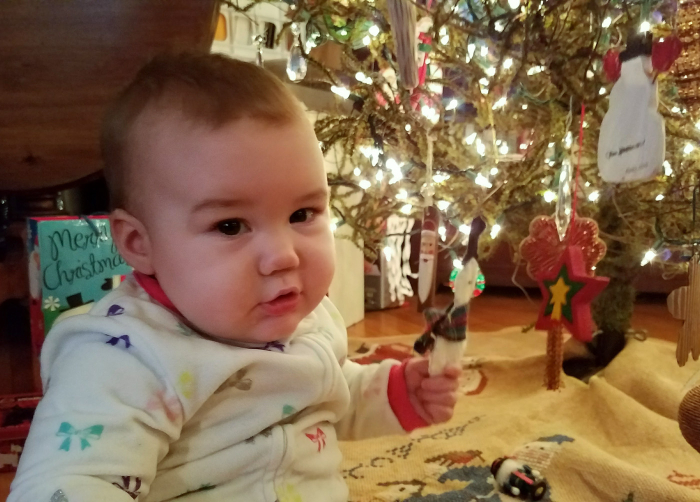 And we had a crawler for Christmas!! Away we go...

Rusty's birthday was the day after Christmas. We met some friends -- among them, another 12/26 birthday -- to celebrate with drinks (and cake!).

Annie was supposed to arrive from Spain later on the 26th and I was going to go pick her up in Green Bay, but due to plane problems/switch, they ended up spending the night in Detroit. So Rusty picked her up yesterday morning, instead (the boys flew into Madison), and whisked her to Appleton for a scheduled eye appointment. She met a friend for a leisurely lunch, did some shopping, had a massage, and I finally met up with her after work. We were enjoying a beer & a snack in the brewpub at the mall, thinking about ordering some food to go, when we suddenly noticed a steady stream of people exiting the mall, and were informed that the kitchen was closed... Um, it was more than a little freaky. We heard no announcement or anything, but were informed that the mall was being evacuated, and the gate to the mall had come down (thankfully, there's a separate entry/exit door to the pub). Turns out, the police had been alerted by concerned family members about a man who might have had a gun and might have been heading to the mall... which sounds sort of WTF? The entire mall was shut down for the evening, and "the man" was never found at the mall. But we're all safe... so weird.

After today, I have four wonderful days off! I had the option of a) taking Monday off or b) working Monday and floating the holiday, and I'm going for the float... there's some travel coming up this year and even one extra day will be welcome!

Tomorrow, the boys will be coming up from Madison -- and I cannot wait for Junah, Mack & Addy to get together again. The boys are going to be blown away by Jun and how much he's changed/grown/matured!!

On Friday, both Michael & Karen will be here, too, and we'll have a little family celebration on the Eve of New Year's Eve! It's been a long time since we've all been together, and I can't wait. (Pray that I remember to get some photos!)

It's been a year of tough losses, in more ways than one. I will be relieved to flip the calendar to 2017, and hope for -- strive for, work for -- better.

I hope all is well with you!

I always love to read your posts, Vicki; they're like a lovely chat with a friend. A friend who makes curtains on Christmas Eve and tempts me with delicious-sounding lobster bisque! I hope the rest of your week is as good as the beginning and that 2017 is full of health, happiness, peace, and lots of better.

What a fantastic Christmas! We will be doing the book and chocolate swap next year, but starting earlier. It's already on my calendar for November.

I love the bathroom curtain. That looks like a difficult size window to cover, and you've done a beautiful job with it. (Also, we have that same hand towel, lol!)

That curtain is beautiful! And what a wonderful holiday weekend you've had. Here's to the next one and even more fun! And go Gin go! xo

Your Christmas sounds crazy and fun, busy and delicious, full of love and happiness-just as it should be! Kids make Christmas all the more special. I'm going to be working my way through the NYT Puzzles section for the rest of the year!

I agree with Bonny - your posts are exactly like a chat with a lovely friend. You always amaze me with your mad skills and really - I love the dress idea! I think it is genius! And, crawling!! Oh my gosh. make her stop! hahaha! Your amaryllis photos give me a glimmer of hope that mine might be okay...

What a crazy, busy fun! And that mega crossword puzzle? Just wow!

Great Christmas recap. I can only imagine how much you are looking forward to your Friday family gathering.

What a wonderfully happy recap (especially the littles, and the lobster, and the curtains!) - enjoy your FOUR day weekend - and cheers to 2017!

What an amazing whirlwind of fun and family. Your bathroom curtains are lovely. The fabric is beautiful. Your grandchildren are growing up so fast. Yikes! I always want to say make it stop. Seems just yesterday mine were babes like yours. Now one is 17 and one 14. Time goes by too quickly. Your tree is lovely. Your meal looks yummy. I love the idea of your book and chocolate exchange. I'm going to look into doing that next year with some local friends. We've just had a bit of a Nor'easter here about 12 inches or snow. We'll be digging out tomorrow. But, for now it is fun to look out our windows, knit, read, and listen to Christmas tunes. I, for one, am happy to see 2016 fly away. All my talk of time going by too fast but 2016 has been a horror of sorts for a number of reasons. A clean slate and a heart full of hope in spite of my fears is what I am looking for in the New Year. Peace, joy, love, and lots of family time to you and your loved ones in the New Year. Thanks for your blog. It always makes my day when I open it up. 'Bye for now from New Hampshire.

2016 had, indeed, been a year of less than great, but it looks like you're kicking it to the curb in high style. Looking forward to more of your 'chats' in 2017, including what you decide to do with that floating holiday. Happy New Year!

I took a few days off from blog reading . . . so happy to read this post this morning! What a wonderful way to spend Christmas. So much fun and joy (and I imagine . . . some pandemonium). Thanks for sharing your day. XO