I left Green Bay on Tuesday - Fat Tuesday - bound for New Orleans, with a stop in Chicago. It was very foggy in Green Bay and there was a lot of turbulence on the first leg of my trip. (I learned that later flights from Green Bay that day had been cancelled.) I don't know if the pilots tried to get around it, or what, but we ended up arriving at O'Hare 15 minutes late and I had less than an hour to make my connection to begin with -- others had even less time. Anyway, I wasn't the only one sprinting through the airport -- luckily, the shuttle was perfectly timed -- and I made it! The waiting area was empty, the sign said "final boarding," and I was the last one to get on the plane. Whew!

I arrived in New Orleans at around 3 p.m. and took a cab from the airport to Ann's Airbnb in the Warehouse District. It was too late to see any parades, though I did see some floats on the freeway (with people still on board) from the taxi. I had a few minutes to kill before Annie could leave her conference, so found a nice place nearby and sat down for a beer. It was 80F outside, so a little sit down with cold refreshment was quite welcome.

Back at the Airbnb, we put our feet up for a few minutes and contemplated options for dinner. We ended up at Restaurant August, on the recommendation of one of Ann's friends. It was a lovely dinner in a beautiful space. We (and everyone who dined there that evening) were served a special dish to welcome us -- the most unusual and amazing brown butter custard, topped with cauliflower puree, with a crispy/roasted bit of cauliflower on top of that, all served in an eggshell and presented in an egg cup. It was just a spoonful or two or three, and so unusual not to mention delicious. Ann & I split a hot appetizer on the recommendation of our waiter (we'd been considering only cold options) - potato gnocchi with blue crab, black truffle & parmesan (turns out, I like truffles just not truffle oil) (same thing with almonds vs. almond extract); our entrees were "breaded" flounder with wild mushrooms, shrimp & crab fat, and roasted Mangrove snapper with tasso crab rice & pepper roasted oyster; for dessert we split grapefruit Pavolva with pistachio meringues, local honey (from an apiary on the "north shore" -- of what, I asked -- of Lake Pontchartrain), and rosemary ice cream. Oh, and cocktails! Mine was The Girl from Ipanema (cachaca, oolong tea, lemon, vanilla & sparkling wine) and Ann's was La Pasion Caliente (Cabeza tequila, lime, cilantro, jalapeno & passionfruit). That's a meal to remember! 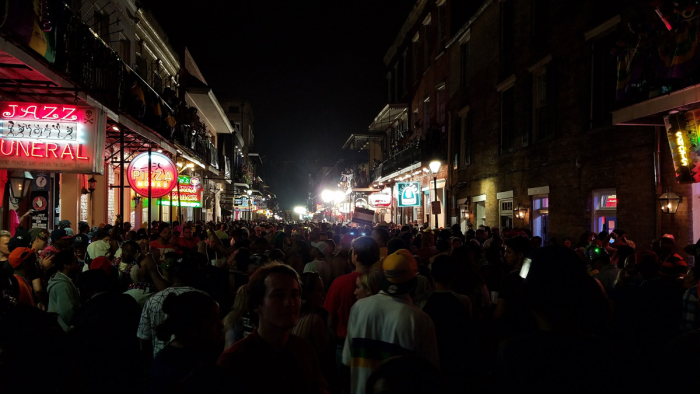 And then... BOURBON STREET!! I don't have a lot to say about that -- it was crazy, packed, and fun. Not my normal kind of scene but, you know, when in Rome... or New Orleans!

Ann still had a conference day on Wednesday, so I had the day to myself... and a plan. 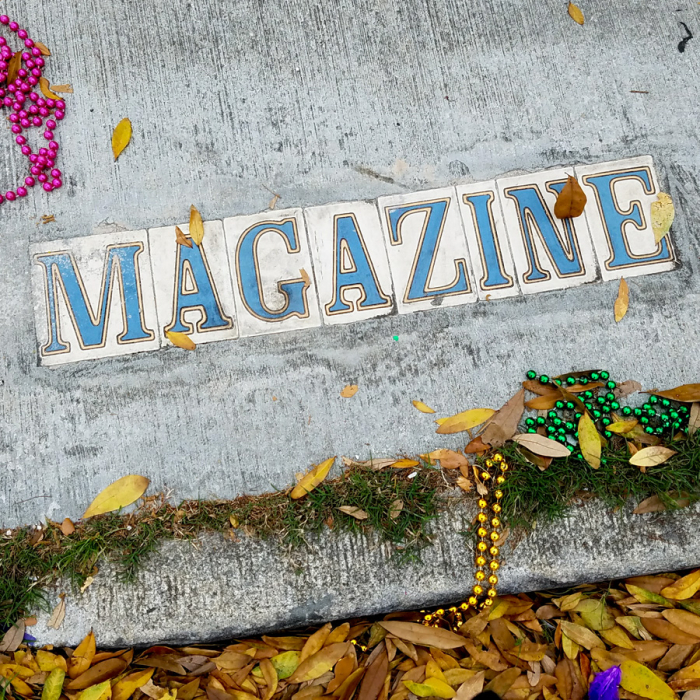 I took a walk down Magazine Street to Stein's Deli, recommended by Mary on an earlier post, grabbing a coffee at French Truck Coffee on the way.

Seriously, the internet -- whether a blog or Facebook or Instagram -- is just the best thing these days when a person is traveling and looking for recommendations. I was not disappointed -- Stein's was amazing. I took a number of panoramic photos on the trip, and this was the first from my seat at Stein's, awaiting my delicious turkey sandwich. Atmosphere and people watching... where it's at! 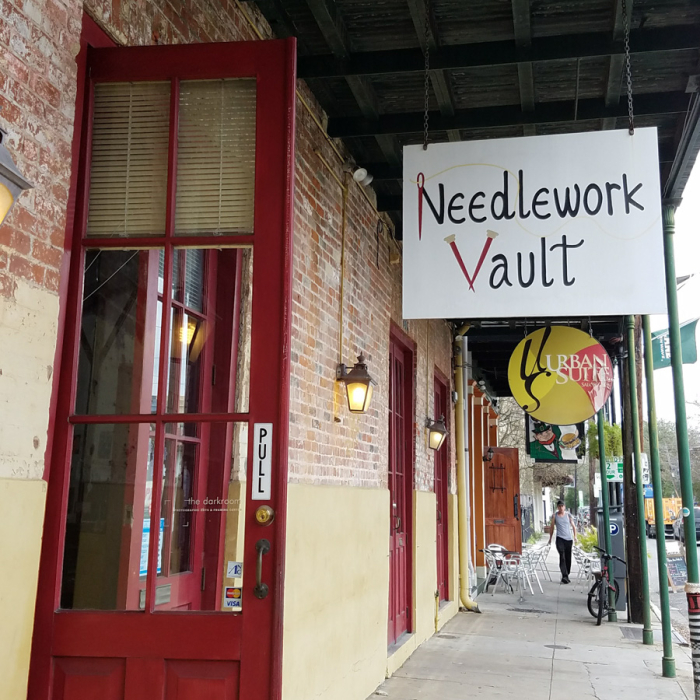 From Stein's, it was a just a little slide to the left on my way back for a stop at the Needlework Vault. That was a fun shop -- three very chatty ladies, one of whom was formerly a policewoman and a story or two about Mardi Gras and Bourbon Street. I found a little yarn and also a small New Orleans-themed cross-stitch chart. 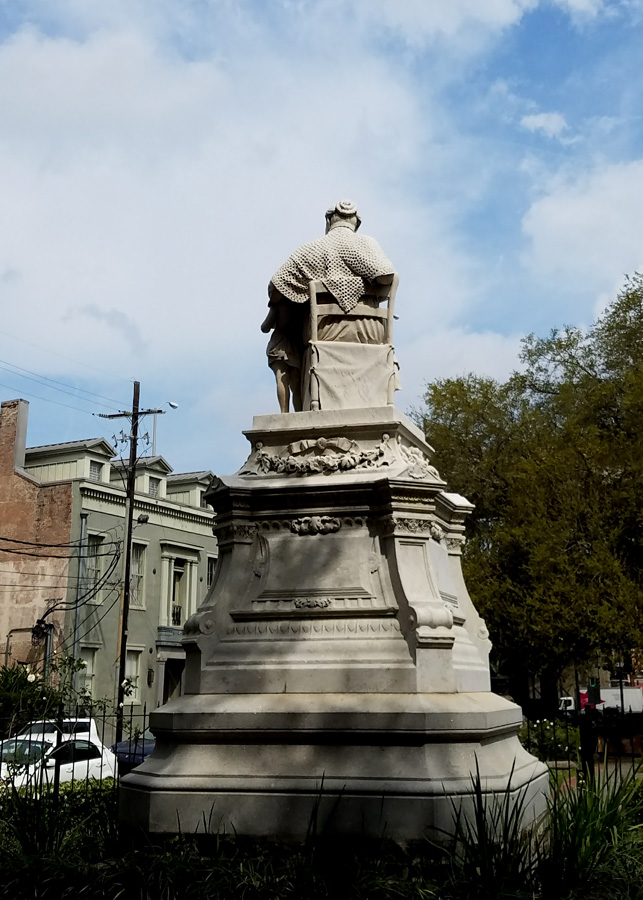 On the way home, I spotted the unmistakable triangular tip of a shawl draped over the back of a chair on the monument above and, of course, needed to investigate further! Turns out, I was in Margaret Square, admiring the lovely shawl (and amazing hairstyle) of Margaret Haughery, known as "The Bread Woman of New Orleans" and "Mother of Orphans," among other things.

Did I mention the weather? Wednesday was also 80F with the dew point at 72! I took my second shower of the day before noon!! Then I walked up a flight of stairs to the roof where I took this 360 panorama of the view. You can see the Crescent City Connection right about in the middle. The "mushroom" building that appears on each side of the photo is called Plaza Tower, and has been vacant & unused since 2002. It's a bit of an eyesore -- okay, fine, it's downright ugly -- full of toxic mold and asbestos. 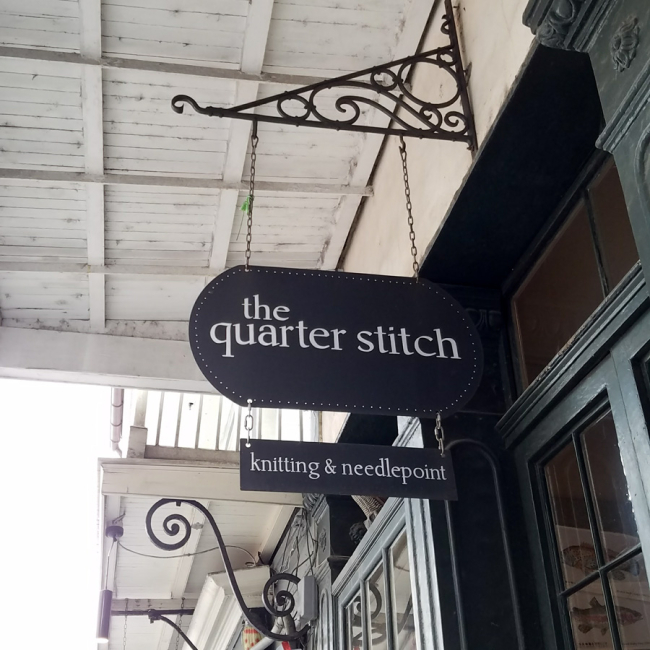 We hoofed it everywhere, as neither of us rented a car and, as established, it was 80 degrees on Wednesday & I'd already taken two showers, so I decided to explore my transportation options before heading out again, and settled on mass transit. Bus and trolley stops were nearby, plus there was an app and a $3 day pass. I hopped a trolley and set out for the French Quarter -- destination The Quarter Stitch. That's a lovely shop and, of course, I found a few more things to buy -- including a souvenir fleur-de-lis needle gauge, some 8" US 2 DPNs, and a Crazy Zauberball.

Yes! I jumped! Thanks to Mason-Dixon Knitting and A Year of Techniques, I am knitting helical stripes. (More about that later... it's so cool!)

I hopped a trolley for the return trip, but my inexperience as a user of mass transit showed as I missed my stop and, la-di-da-di-da, ended up riding to the end of the line! I hopped off and got back on and was only 40+/- stops and an hour late meeting Ann. It was a nice main-drag tour of the Garden District, though!

We'd planned to go to a concert at Lafayette Square on Wednesday evening, but nothing was happening when we showed up -- it's possible that it was cancelled due to the threat of thunderstorms. It's not like you can't find music & food in New Orleans... so we did a quick little search and ended up at Killer Poboys at Erin Rose. Hello yum.

We also did some club-hopping and dancing! I may even have had a seat on the "LOVE TRAIN" that snaked through Fat Catz...

Thankfully, Thursday dawned much cooler and less humid. We'd wanted to go on a tour of some sort, and decided on bikes. Andrew was our most excellent (and truthful) guide on the Queen of the South tour at FreeWheelin' Bike Tours - a little bit of history, a little bit of architecture, a whole lotta fun. 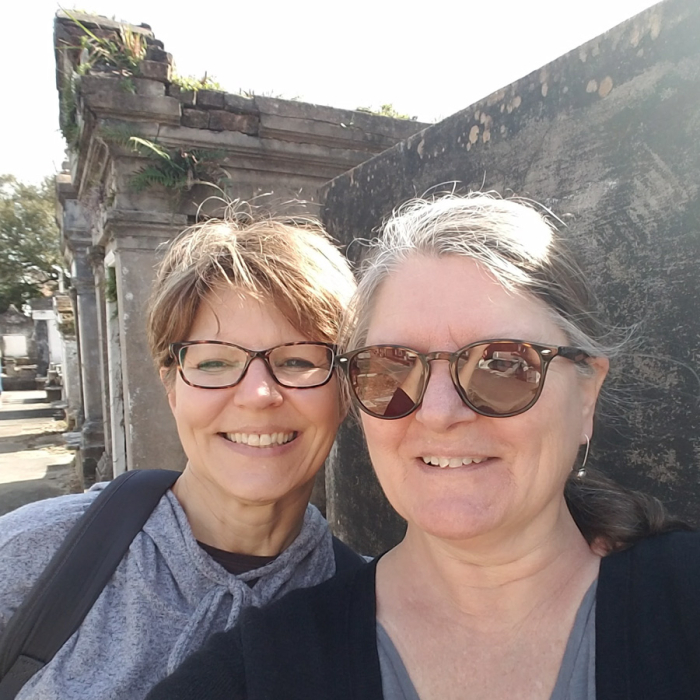 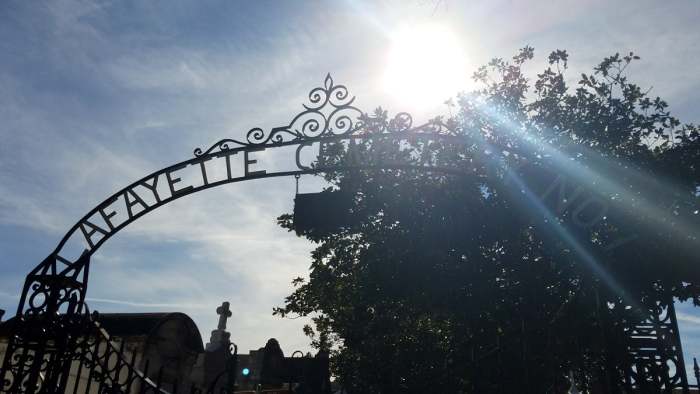 From the moment I knew I was going to New Orleans, I knew I wanted to eat at Emeril's -- it makes me think of Maddy because she was such a fan of his TV show -- and that's where we had reservations for dinner on Thursday evening. It was just a bit more casual than Restaurant August, which suited us, but the service was just as fine or better -- Herman & Tim stood out and were most helpful & attentive. Ann & I shared Emeril's New Orleans BBQ Shrimp appetizer (served with a delicious petite rosemary biscuit), Ann had drum and I had swordfish, and it was free banana cream pie day, so we split that for dessert. Oh, cocktails: I had the "Grasshopper" -- not the ice cream version -- it was made with Hendrick's gin, cucumber water, lime juice, wheatgrass, and jalapeno simple syrup (yes, it had some zip!), and Ann had a Moscow Mule (she'd never had one before).

We hung out a little closer to home that night, having a beverage and then catching a free comedy show at The Howlin' Wolf.

We started slowly on Friday. Ann had to deal with a little stomach bug in the wee hours of the morning, and thankfully that's all it was. Eventually, we headed out for beignets!! And a really good sandwich, too, but BEIGNETS... at Cafe Beignet! We went to the Royal Street location because if it's good enough for Alton Brown... oh, so yummy.

Ann had an order from Addy in Spain for Cheez-Its, so we were in need of a grocery store... we contemplated taking Lyft to a big box store, but prices were still pretty jacked and those would be some pretty expensive crackers! We stopped and asked a pedicab driver if there were any full-size grocers nearby and we ended up getting a ride to Rouse's. She stocked up on things like peanut butter, cereal, and snacks (I'd already fulfilled an order for a couple bottles of maple syrup), and then we carried it all back to our flat -- stopping for refreshment on the way!

Our final restaurant destination was Peche on Friday evening. This was the most casual of our "fine dining" establishments. We'd been shown directly to our tables at Restaurant August and at Emeril's, and made it a point to arrive early at Peche in order to enjoy the scene and a drink at the bar. I had a delicious cocktail called Morris Day (Nolet's dry gin, thyme, grapefruit, lemon & tonic) and Ann had the Gintilly Shakedown (Hendrick's gin, ginger, cucumber, lemon & cava). Actually, I had two. 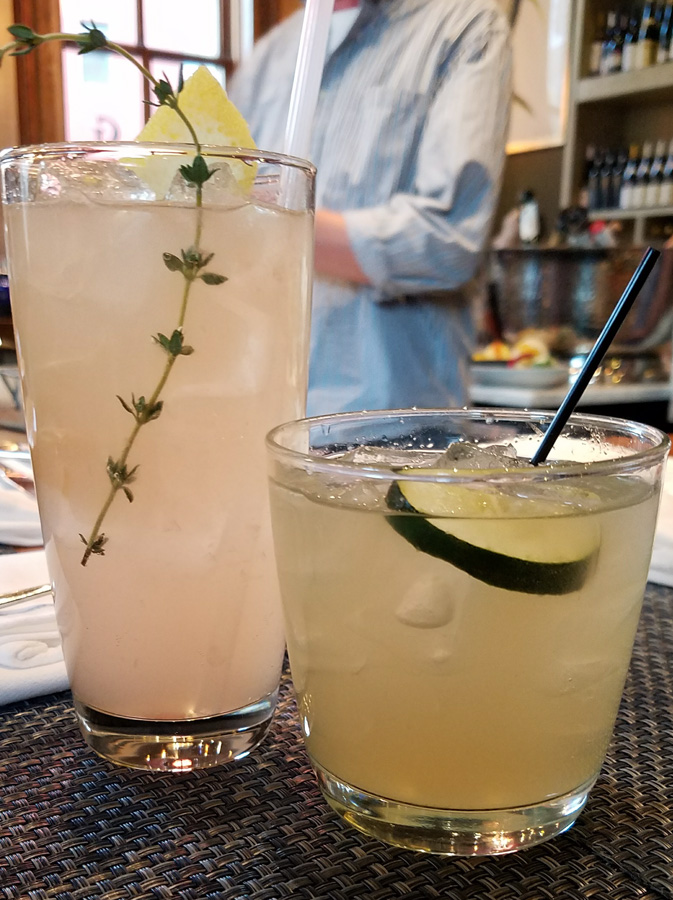 And oysters!! I'd never had raw oysters before... so that was interesting, and good! Meanwhile, Ann had struck up a conversation with the woman sitting next to her and we got on so well that we invited her to join us for dinner. Turns out she's originally from Michigan, is a knitter and omni-crafter, and her husband was our bartender! We chatted & laughed & ate the most amazing food -- a collection of shared small plates including steak tartar, caviar, snapper collar, fish sticks, and tuna spread. And also wine.

Ann and I talked about going out for a bit more music & dancing, but we were pooped by the time we got back...

And I had to be curb-side, waiting for my cab, at 5:30 a.m. on Saturday morning! Ann's departure was a bit later, but she had a lot of packing to do. 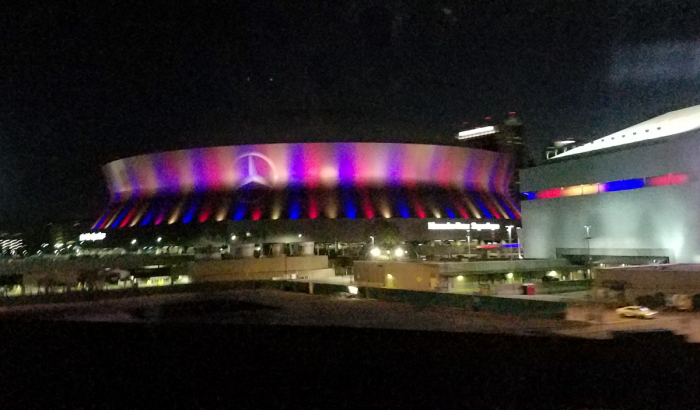 When I checked in at the airport in New Orleans, there was a message at check-in that the flight from Chicago to Green Bay was overbooked and I had the option of possibly taking a later flight in return for a voucher. And that's exactly what I did. I had knitting, an audio book, and all day. I was more than happy to take a travel voucher (and a few meal vouchers) in exchange for my seat!

Too early to return? There's SO MUCH left to do!! We didn't go to a single museum and didn't hear nearly enough music!

Meanwhile, Ann informed me that next year's conference is in Nashville! And as I spent the day at O'Hare, Kate was busy booking our flights to SPAIN!!

What's that they say??   A rolling stone gathers no moss...