I managed to get through the holidays without getting sick, even though nearly everyone around me -- whether at work or at home -- was sniffling and/or complaining of scratchy throats.

It finally caught up with me.

I think I'm going to luck out and skate through with the "lite" version... and if I'm not better by mid-week, well, predicted sunshine and mid-80s during our FL getaway will likely do the trick! I am so looking forward to renting a chair and an umbrella and parking it at the beach for a day... and getting warmed up all the way through!

I drove Kate down to ORD on Thursday for her trip to Paris-London-Edinburgh, and made it back in time to celebrate Junah's birthday... can you believe he's THREE??? 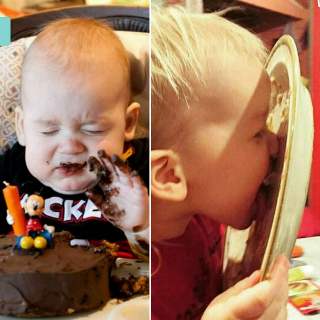 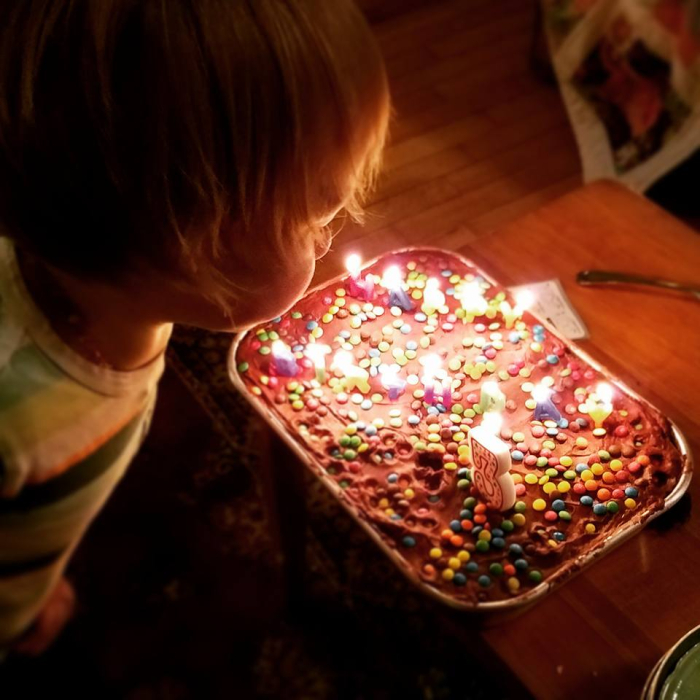 This year, at 3, he was all about the frosting!! Mini M&Ms are pretty good, too.

He wanted to come over to Nona's house afterwards, but of course it was too late... so there were tears when we left, but also a promise for time together on Saturday. He was over all afternoon and we had so much fun... reading, coloring, snuggling, building with Lincoln Logs!

I finished all my Pussyhat Project knitting and was able to take some photos. 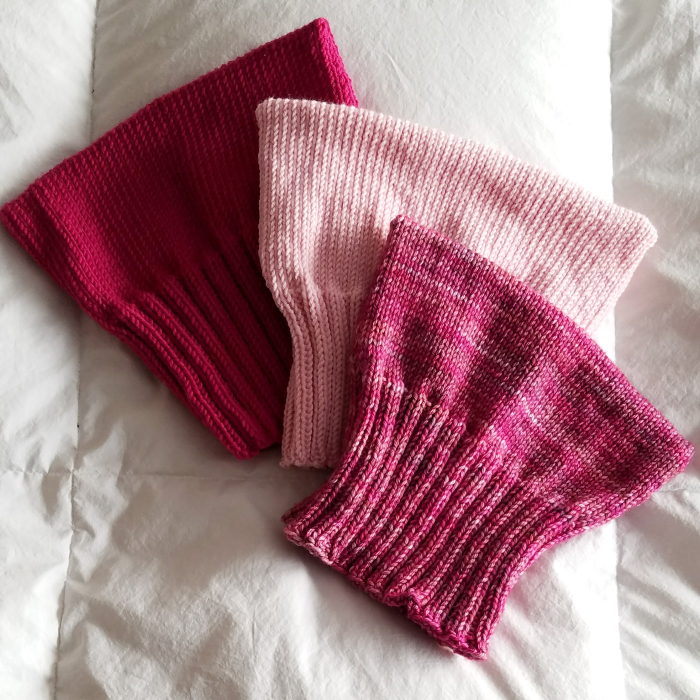 Meow! The solids are Plymouth Select Worsted Merino Superwash (Light Pink is color #21, Dark Pink is #48), the other is Malabrigo Rios in "057 English Rose" -- all lovely washable yarns!! It was a pleasure to knit these hats for sisters/marchers!

I made the light pink one in the round on DPNs and did a 3-needle bind-off, the other two were knit on straights and seamed; there are slight differences in the length of ribbing/stockinette, but they're generally all about the same size. And headed for DC!! Ravelry project page is here.

I have finally turned my attention back to finishing the kids' Christmas presents... I know, I know... I still have an unfinished Peace Cowl, too, and a couple pairs of Squad Mitts (to mention only a couple of things). 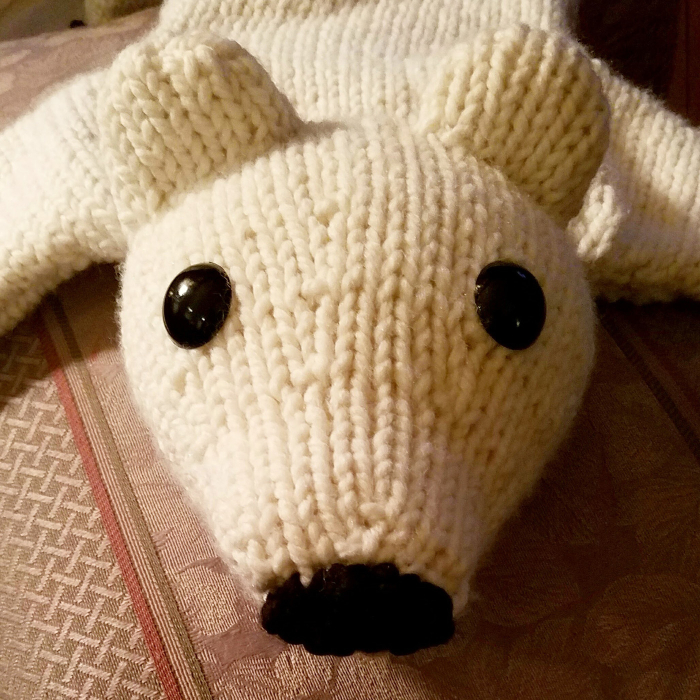 I saw Louise Walker's Knitted Polar Bear on Mollie Makes' Instagram feed when I was at the airport in Milwaukee in October -- on my way to Rhinebeck. I was instantly smitten and had to have it! I immediately purchased & downloaded the issue.

I had to special order the large eyes... and when I realized that the first ones I ordered on Etsy were on the literal slow boat from China, I dug some more and found a domestic source (so now I'm up to my eyeballs in large safety eyes!). Bear #1 is finished except for some extra embellishment that I want to add. 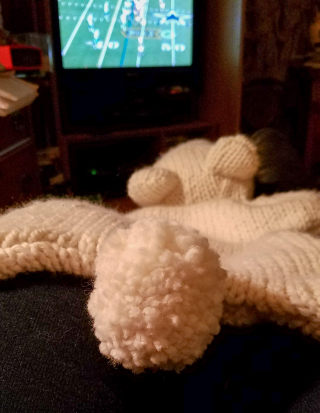 I made the super-fluffy pom pom tail during the Packer game yesterday. It was the first time I used my Clover Pom Pom Maker -- so quick, easy, and FLUFFY! All of the pieces are knit for Bear #2 and sewing up is well underway. If I don't get too distracted, I may even finish before we leave.

And, of course, there's an amaryllis update: 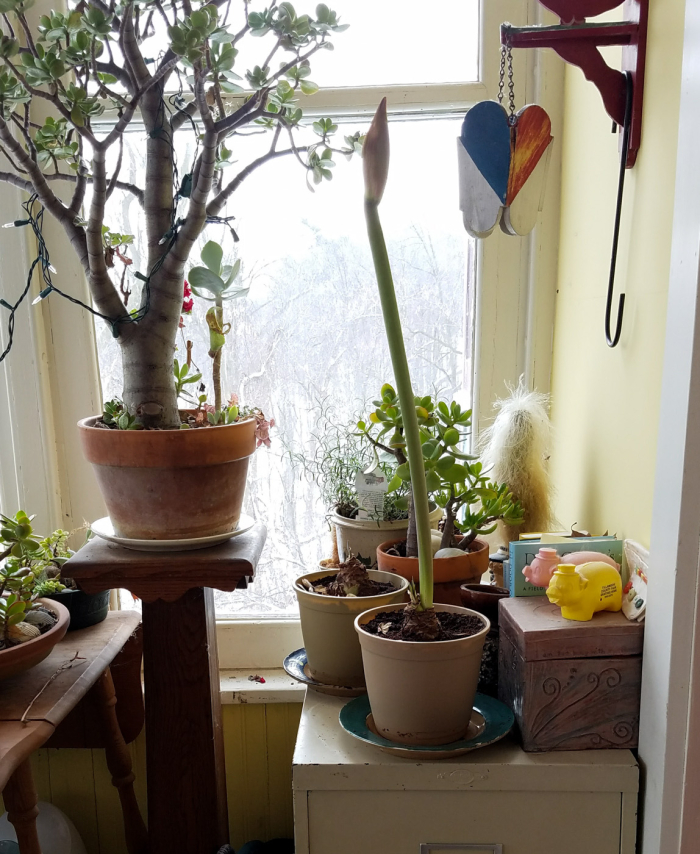 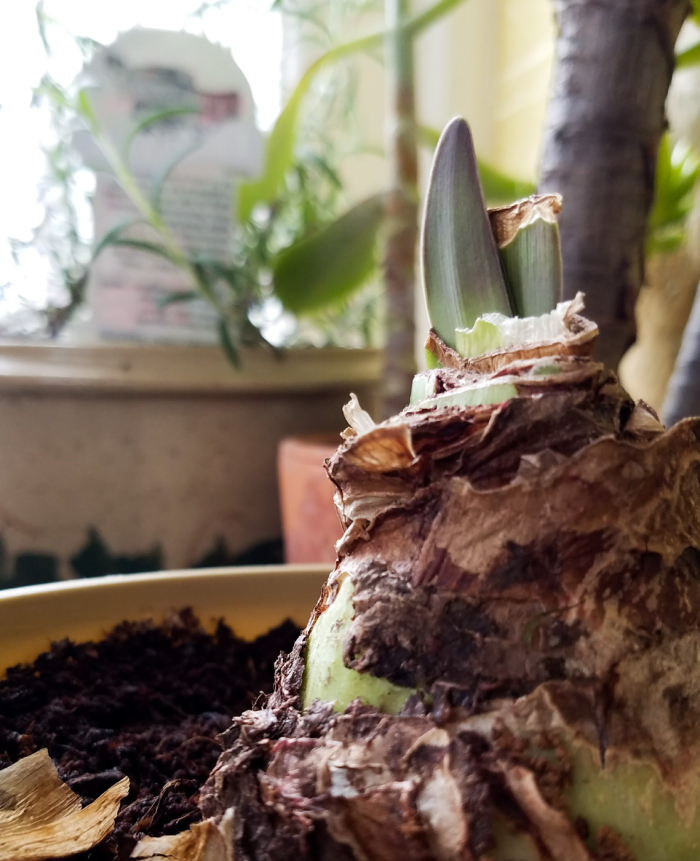 I'm hoping that I get to see the bloom before we leave on Wednesday!

How can that sweet boy be three already when it seems he was born just a few months ago?! Love the cake, celebration, hats, bears, and amaryllis!

I just can't believe Junah is 3. I mean, I know he is but still. 3. Sorry you're sick, I sure hope it doesn't interfere with your vacation in a bad way.

THREE!?! I can believe this, because Charlie is TWO (it's a great help that Junah and Gin are both a few months ahead of my little guys). and please, Feel better for your trip. I want you to love every second of Florida in January! and yeah, it would be nice to see the amaryllis bloom, but given SUNSHINE and the BEACH, I'm not sure it's much of a choice :-)

Junah is three!?!? So amazing how quickly children grow. Gin is growing even faster, I swear. Hope you feel better by the time you leave and you can warm all the way up in the sun of FL. I'm ready to book a flight as I so very tired of gray. Come on amaryllis!

Three? How is that possible!! I hope the 'lite' version is out the door soon - have a fantastic time in FL! And, your amaryllis - wow!

I love just everything about your post -- except for the sick part. (Boo.)

Happy Birthday, Junah! He is an official big brother at 3! I love your hats. I made 8. They'll be on their way to Washington, Boston, and Concord, NH with friends. We're sick with the full blown version over a week now. I'm looking forward to being better and a trip South in late February. Hope you have a terrific time in the sun.

Forgot the polar bears!!! Oh my gosh-so cute! Are they like a rug for the kiddos to use to curl up on? Great pompon tail!

Goodness, three bright hats to a momentous march for women. And a sweet 3 year old to boot - I guess three is the number. My three (!) amaryllises look peaked or ailing compared to yours.
Keep healthy, don't breathe close to others. Ha.

Hoping you are in FL and feeling better. Love the pictures of the various birthdays...so cute and funny. Your hats turned out great and I love the polar bear! Soak up the sunshine and enjoy!!