Another reader in the making. Books, books, books! 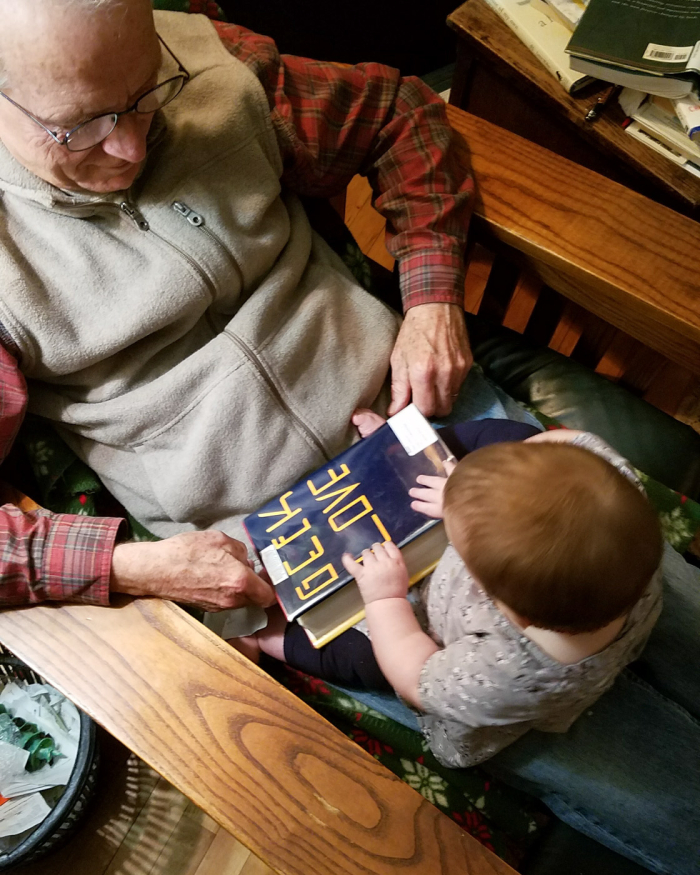 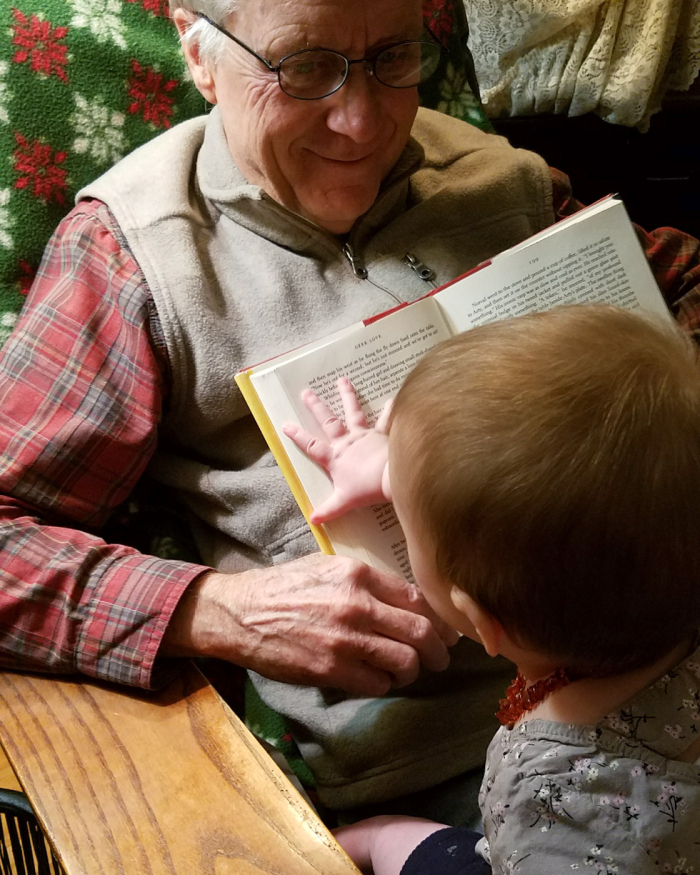 While my reading habits have changed over the years, there is no doubt to anyone that we're a family of readers and that books are important to us all. The first piece of furniture I ever bought for myself was a bookcase!

Meanwhile, the boys were busy... 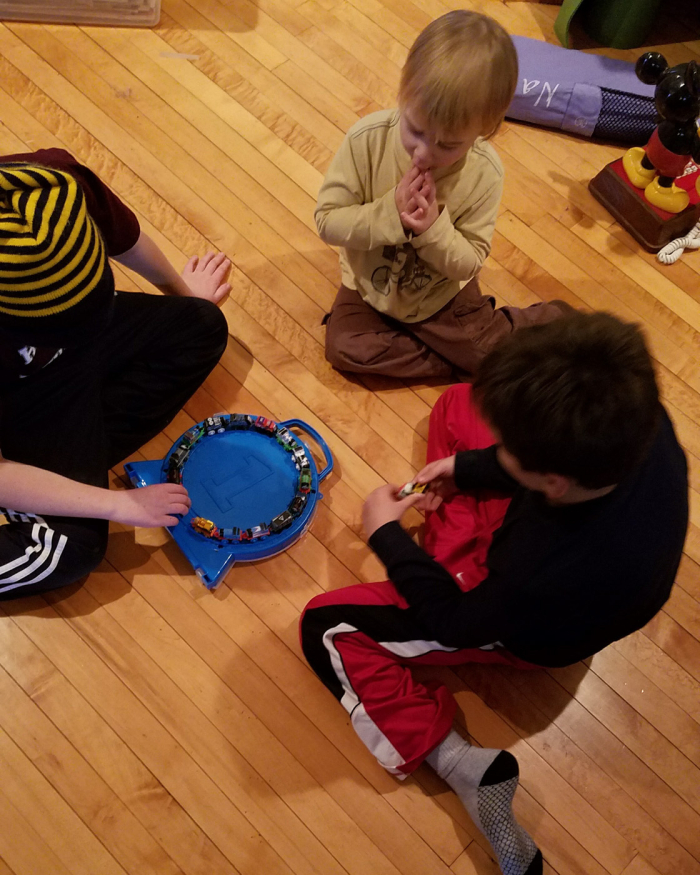 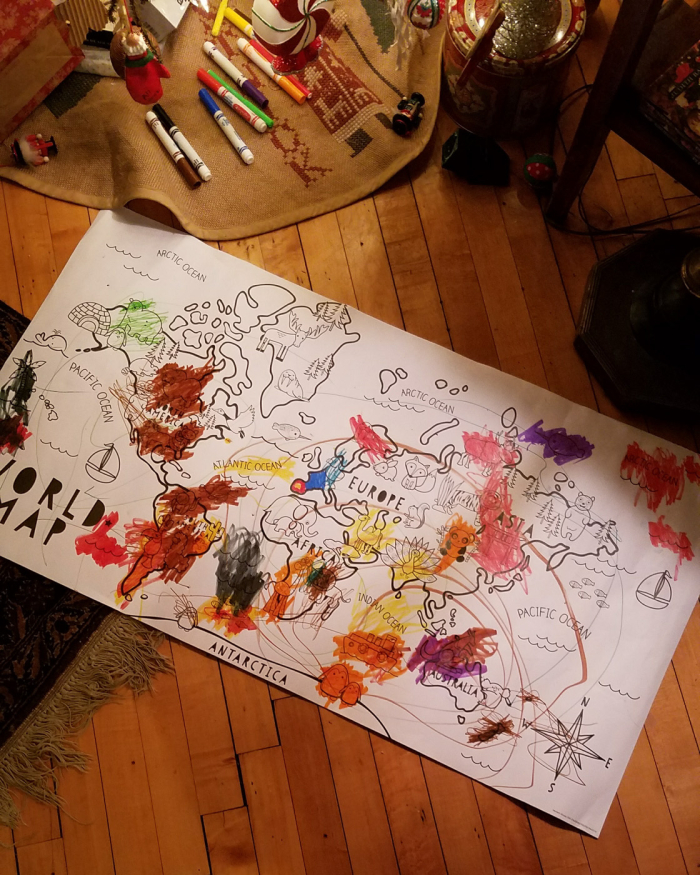 Trains and Maps! That's mostly Jun's work with (washable) markers. I love it! 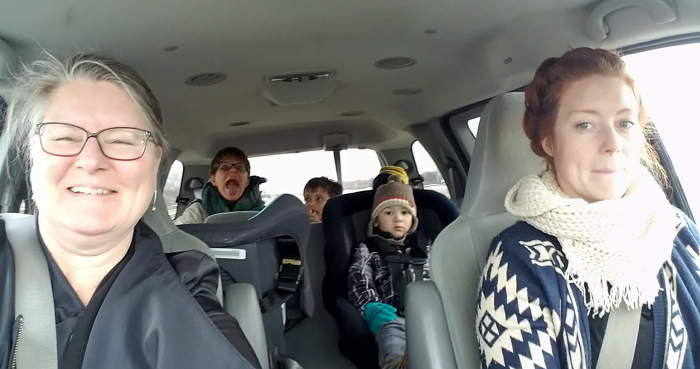 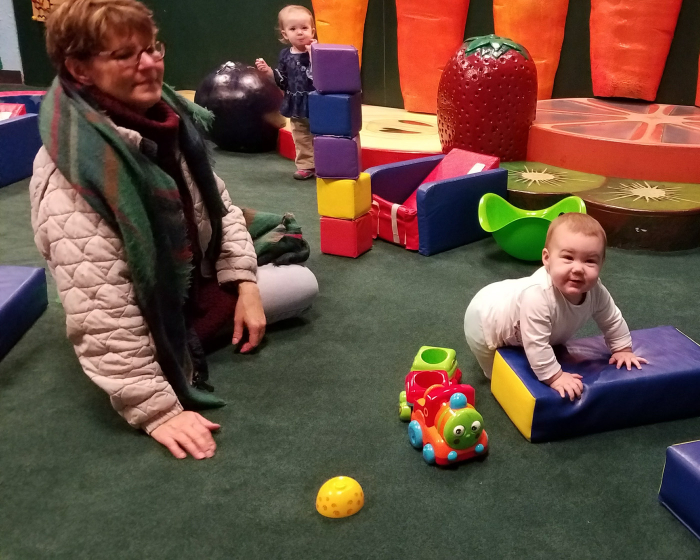 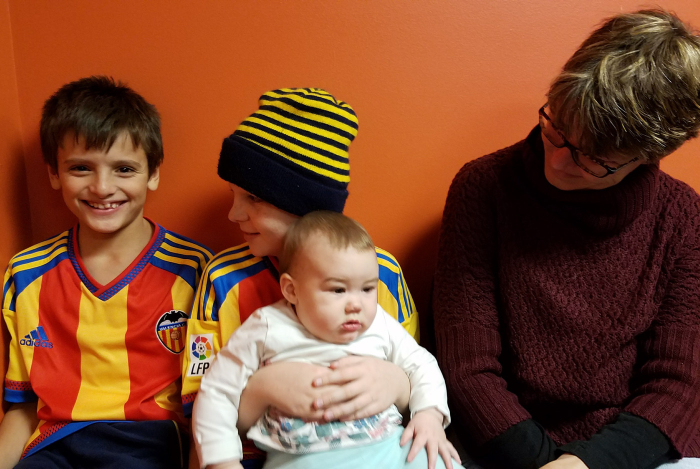 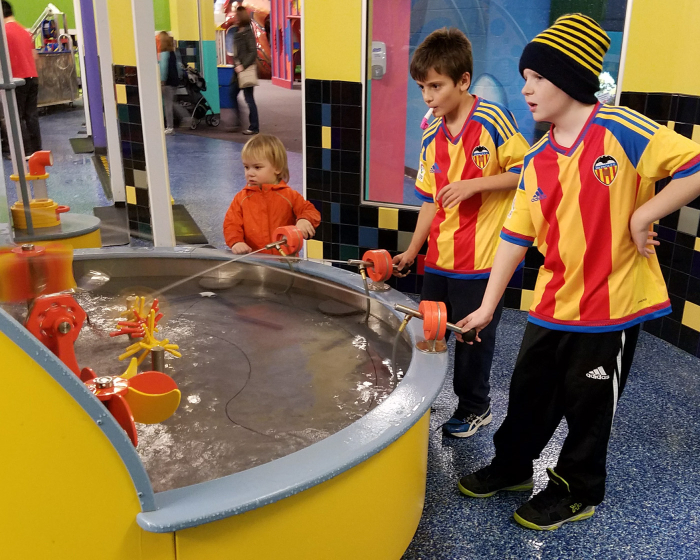 Karen wasn't going to arrive until later in the day on New Year's Eve, so we went to the children's museum! They had a "ball drop" every hour on the hour, with noisemakers and hats and streamers... the kids had a blast!

Plans were rearranged a bit, so our family visit was on Saturday instead of Friday. Michael was unable to come, no matter the day, because his wife was unwell. We missed him! 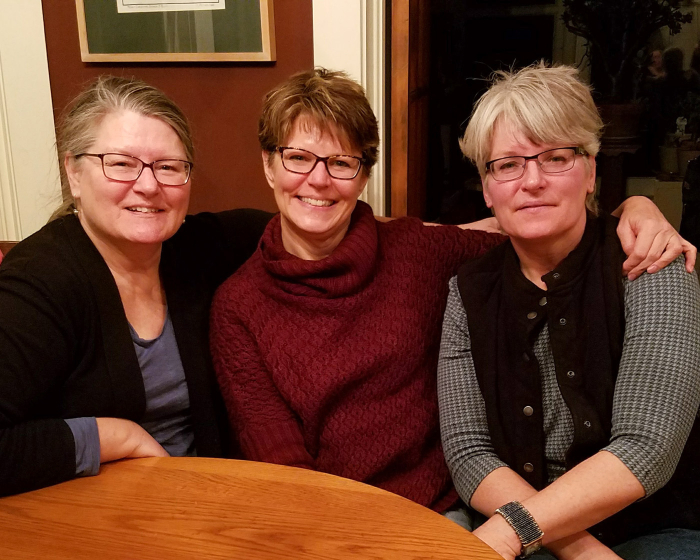 My first thought when I look at this photo is that I look exhausted! I wasn't feeling exhausted... but it was a busy few days (and continues to be)... and I still haven't had a minute to stop and square up with the new year.

Also, similar to a situation almost 29 years ago when I first joined up, this photo has spurred my renewed membership with Weight Watchers! (Oh, no, I'm a January Person!) I signed on last night and we'll see how it goes... I need a plan and a kick in the pants. I have a few friends who are also members, and it's nice when there's support. WW has changed quite a bit since I last attended meetings (possibly in 2006?); I've signed on two or three times over the years, with varied success... but mostly success. No doubt, there will be more about this turn of events in the coming weeks.

Anyway, Karen arrived with her husband and both sons, and it was great to see them. We had a full house and lots of visiting!! 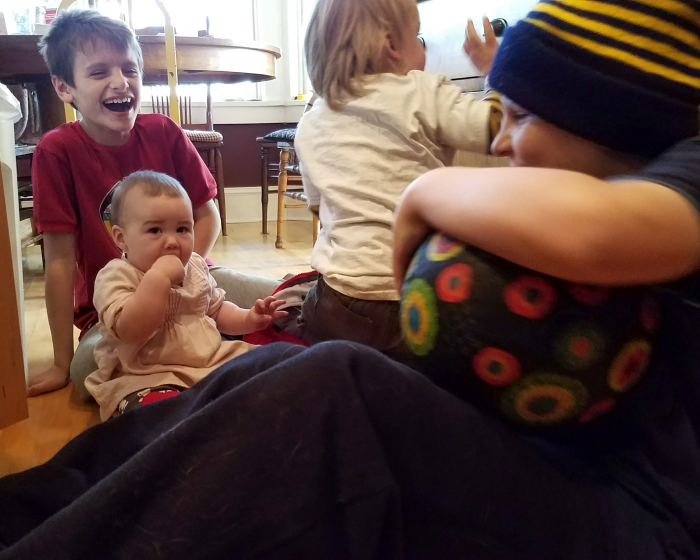 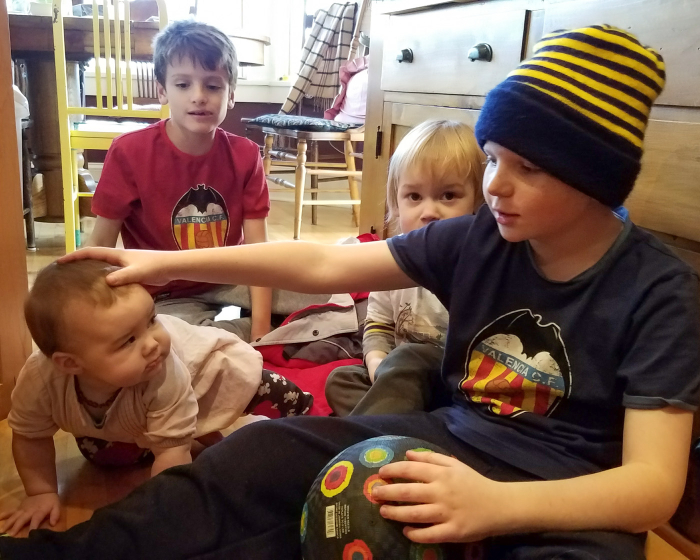 More fun with kids on New Year's Day... trying to get a decent photo is no small task. It is quite humorous though! Oh, they're all together on the kitchen floor? Ready, set, CLICK! 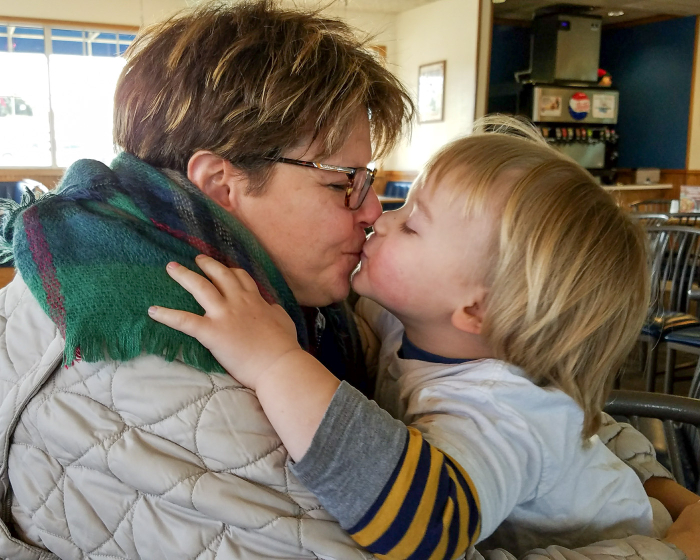 And then final farewells! Ann & family have a few days in Madison before flying back to Valencia on Friday. I'll see Ann at the end of February when we meet in NOLA for a few days, but the kids won't be reunited until July when they're all back for about a month. Luckily, Junah seems to be a bit more comfortable with Skype each time he has the opportunity. He was pretty sad to see them go.

OK. That's it for now! I hope you've had a good start to the new year.

Is that an amber teething necklace? Curious if it "works".

Great photos! And, Happy New Year. In that pic where you say you look exhausted, I would say the 3 of you just look happy to be together.

You surely must have been exhausted, but you look great! How fun to see the kids having a great time together. Good luck with your venture! I've joined the local community center as they have a great track for walking and winter just isn't conducive to walking my circle.

I love the books, fun, and most of all, everyone being together! I'm a fellow January person as I seem to have rewarded myself with food and treats at every opportunity during the holidays. What better time for us to start anew and renew than January!

Are doing WW online? If so, let me know your online name and I'll find you!

How nice that you had at least some of your family with you for the holidays. Great pictures of the children having fun together!
I will be one of the January people at WW, too. I have done the program a couple of times, and the last time (summer of 2012 to May of 2013) I was making steady but slow progress until I had to end my membership when I had a knee replacement done. Since I retired a year and a half ago, l've gained back a lot of it. Time to start again!

Your year is off to a full start - love seeing the kids together and love seeing you with your family. Glad you've got more together time on the calendar; it always makes saying good bye a little easier!

I do not see the exhaustion in that photo, but rather, I see 3 faces that are obviously related - and beyond that I see an abiding comfort in being together!

As for WW - I have been plodding along with it and could not be happier! There is a phone app that makes tracking points and activity super easy (in fact it pulls data from a number of activity trackers, Apple Health if you have an iPhone and Fitbit are ones that I have). Anyways, you can count on me to cheer you on!!

How great for your family to be all together for those days, although I'm sure you missed Michael. Those cousins are adorable together, too!

I love all the photos. So much love and fun and togetherness. What a great time! XO