Rooting around for some travel knitting that would be suitable to take on the plane, I wasn't really coming up with anything that wasn't at a fussy stage (project-of-the-moment on long, straight, aluminum needles gets packed in the checked bag or left behind).

The first pattern for A Year of Techniques was set for release on March 1st, and though I hadn't yet signed up, all of a sudden I had a yearning for knowledge! I knew the March project required a Zauberball and a set of DPNs, both of which I already had... ready, set, go!

The pattern is Hyacinthus Armwarmers by Jen Arnall-Culliford and the technique is helical stripes -- knitting spiraling stripes in-the-round. No jog! 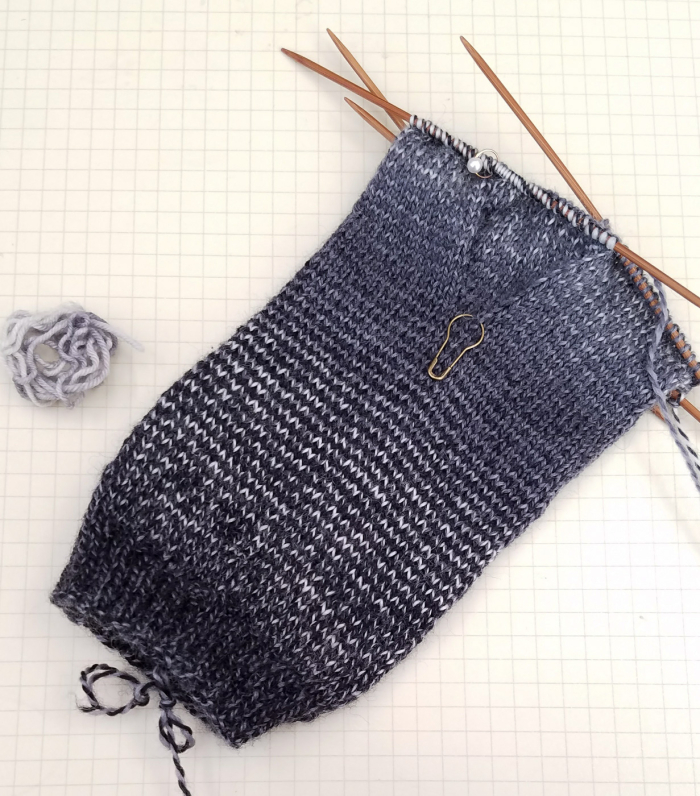 That's neither the Zauberball that I had in mind nor the needles that I began with! My Zauberball was pink & green & white... great colors, but not what I want for armwarmers. Instead, I found a great neutral colorway called DOMINO while I was at The Quarter Stitch in New Orleans. Also, because I know that my knitting is tight on DPNs, I decided to go up a needle size... but my knitting is different with these stripes... so I ended up ripping it all out and beginning again with a size smaller. I like it much better.

Helical stripes! I want to knit them all day! That little bit of yarn is to hold the thumb stitches, and that's my next step. I'm just letting the yarn flow as it may, so sometimes it's more contrasty and other times there's some muddy water.

I think I'm going to use that original pink/green/white colorway to make a helical striped hat for Gin!

I've been sort of ignoring the posts about these stripes but I'm guessing at this point resistance is futile as those look pretty awesome!

I WILL buy a Zauberball this weekend! I must try this technique as I love the way the colors peek and play. There is just too little time in a day to do all the lovely/wonderful crafty things waiting for me!

i've been thinking of trying the helical stripes for some socks... :)

I'm pretty sure helical stripes are magic. (but I think that about a lot of knitting). Love the colors in your mitts and agree that the original ball will be magic for Gin.

Kat was kind enough to explain helical stripes to me this morning and now I get to see your lovely ones! I can barely wrap my mind around it even after reading MDK, but I hope this is something that will make sense when I quit overthinking and just do it. Love your cool new tricks!

I think I may give it a try myself. But, alas. First I'm going to have to find a Zauberball. . .

That pink/green/white Zauberball has been calling my name for years. It looks like spring! Looking forward to trying the helical stripes; I went ahead and signed up for the ebook series. Now to find a little time.

Everyone seems to be on the helical stripe bandwagon and they do seem really, really cool. I need to get me some appropriate yarn and give it a try...or do what Nancy (Wyoming Breezes) did and use yarn scraps to make a little hat - it's really gorgeous!

Love your neutral mitt -- so pretty!

I found the stripes completely addictive. So much so, in fact, that when I finished my first pair this weekend, I splurged and ordered another Zauberball to have a pair in a different color. I plan to cast on when the yarn arrives -- and I'm not usually a repeat knitter! I don't know just what it is about them that it so irresistable!