Right now!
Randomly on a Friday!!

I've been pretty busy and/or under the weather and/or grumpy and/or uninspired, so didn't really think too much about today's Think Write Thursday topic about heritage -- Irish or otherwise.

Then I read this sentence in Carole's post and laughed out loud:

As a researcher once told Dale when he was trying to prove that he is a Mayflower descendant – if you look too closely into this you might find out your family story is wrong.

Haha! Yeah. Grandma always talked about a great uncle who’d done the research and traced back to Sir Francis Drake… but, um, I acquired a copy of his research and it was Sir Barnard Drake… CLOSE but no cigar (definitely a sailor, but kin?)! I still have a soft spot for Sir Francis, tho.

I've been involved in family history research for almost as long as I can remember, more -- particularly in the years immediately following the birth of a child -- or less. The aforementioned Grandma Blum was supportive and helpful (oh, I miss her!). I had a subscription to Ancestry.com back in the days of dial-up modems and was equally excited and frustrated when things like census images began to be available for online viewing. Excited because YAY, frustrated because DIAL-UP! OMG, I would finally get a page to load and then zoom in and/or move the page and it was pure AGONY to wait while it reloaded... you had time to go to the bathroom or throw in a load of laundry while you waited!

Now it's easy -- sometimes too easy, I fear. There's a lot of inaccurate information out there with no research or sources to back it up, and people willing to accept it. I know first-hand how important it is to DO THE RESEARCH... follow the trail, don't settle. As I recently remarked to a friend who was exasperated with the repetition of given names in her research:

Anyway, there's a lot of English and German -- I've always thought more German. I've made Grandma Koenig's Apple Kuchen recipe since I was able to slice apples, and her dumplings, as made by my Aunt Arlene... well, it's been years and I still remember how delicious they were (my mother never made them). Her mother had come from Germany as a young girl and never spoke English. I made sauerkraut and pickles with my dad, and I ate Grandma's sulze with Grandpa Blum (learning that at butchering time, nothing was left to waste!). Grandpa Blum's family arrived in New York from Germany in 1855; Grandma's family from England before the Revolution.

A couple of years ago, for Christmas, Rusty & I each spit in a tube and sent them off to Ancestry DNA. 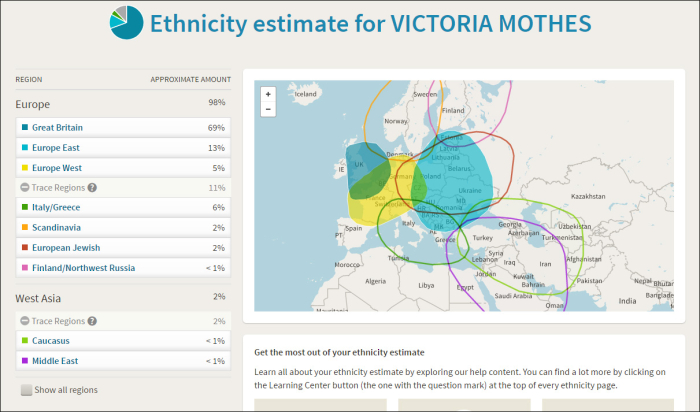 Rusty's, on the other hand:

It starts to get really complicated, doesn't it? I have a very Irish-sounding surname . . . but I'm not Irish at all. (It's Tom. . .) Tom's family is actually from Northern Ireland (Ulster) -- but has some Irish in there, too!

Both of my parents have fairly well-documented family histories, although it's only one side that's documented for my Mom's family. (The other? Pretty mysterious and complicated to untangle. . . )

This is interesting! My mother delved deep into genealogy, visited cemeteries, went looking for old documents in courthouses across the country, and ended up with 14 huge plastic bins full of binders with information. I was always more interested in the stories about people than names on a family tree so thankfully my sister inherited the bins. I really enjoy family stories that go with family recipes, and yours sound most delicious! (I have my grandfather's recipe for head cheese also!)

My mother would have loved today's technology for her exhaustive research. My family is full of people who love genealogy so I've left it to them. I know we're from the first wagon train to come to Utah, but the one I'm not sure about is the Mayflower story (although it seems well documented). Smith and I have talked about a DNA test. Could be fun!

What a treasure trove of history you have. Kinda fun to have the "myth" debunked. Hope you are feeling better!
Cheers~

When I was a working tax accountant, I did a number of returns over the years for various members of a dynastic milling family whose name you would recognize. As is the way with dynastic families, they has some favorite names that repeated over generations. Katherine was a favorite, as were Edmund and Charles. The eldest son in the main family line was always John; they were up to John IV, and he was approaching the age when he would marry and produce John V. In another branch there was a son, a Jr., who married a woman with the same first name as his mother. There were two wives with the exact same first and last name (middle initial may have been different). I kept a copy of the the family tree handy to keep from getting confused.

I am glad to know we both laughed at the same place in Carole's story! And, how fascinating your history is!! (We can't trace my dad's family back very far either - his dad was one of 13 children... all different fathers, and she never married. Scandalous for Holland, Michigan, I am telling you! LOL

I remember when you and Rusty did the DNA thing and I want to do that at some point, too. I tried ancestry (we have a subscription at the library) but I got so confused that I gave up on it - I just wasn't sure what to do when I reached a dead end.

Both of my grandmothers were very into genealogy and we have pretty solid documentation back to the 1700's (and even earlier on my mom's father's side) ... but Marc's family not so much. It's pretty amazing what you can find out on the internet (good, bad, ugly ... and just plain wrong ;-) !!