Remember the time...
It's another birthday!

Weekending: From Bizarre to Bazaar

In the bizarre, I assisted with some unplanned car buying last week. Kate's 2005 Subaru Forester took a crap on her late last week (thankfully, waiting until after our return from Chicago!). There's already been a pile o' money sunk into that vehicle with, it seems, only the promise for more of the same. She decided to cut her losses, and once that decision was made, she began doing the legwork involved in finding a replacement. She ended up spending most of the week with us -- in a half-painted room with drop-cloth-covered furniture -- which made car-pooling and -sharing a little easier. By Friday (my day off), I schlepped her around to sign many of the things, and by noon on Saturday, after signing all the rest of the things, she drove a new-to-her (one previous owner, less than 90,000 miles) 2010 Subaru Forester off the lot! It's newer, nicer, and has a few more bells & whistles. Also, little things that make a girl happy... like an AUX jack!

I watched the kids on Saturday afternoon while Ali readied the KC&T Coffee Camper for it's longest & busiest gig so far! 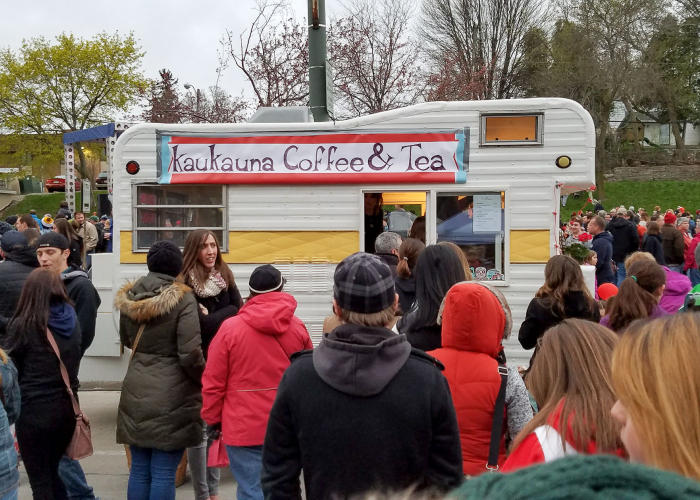 It was pretty chilly on Saturday night -- which is just what you want, I guess, if you're offering mostly hot drinks at the first Bazaar After Dark of the year! They were busy -- working their butts off busy -- all night! I was even put to work for a few minutes. 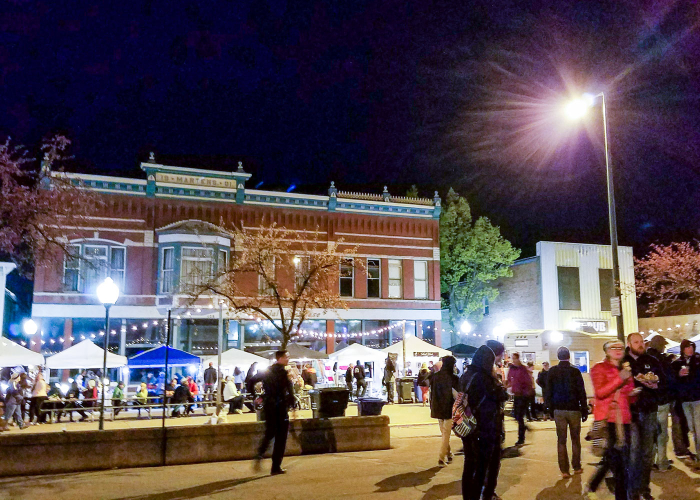 Two streets & and alley were closed to traffic for the event, with lots of really great craft, food & drink vendors (which I happily did my part to support), music & entertainment.

The bazaar served to kick off a Habitat for Humanity Rock the Block event happening this week, right in my 'hood. One of the main items on the agenda is the rehab of a small park down the street that's seen better days (like, once upon a time, when the fountain was still working). I am anxious to see the re-do!!

That sounds like a fun night of good food, drink and crafts! And congrats to Kate on her new Subaru! We love our Subarus, too!

I'm so sorry you had to go through the pains of buying a new(er) car and I hope Kate's new ride serves her well! The Coffee Camper is so, so cool and the events sound fun, too!

The pictures from the bazaar could have been taken here in Athens. Maybe we live in Sister Cities?

"Unplanned car buying". There are more worrisome phrases, but they tend to involve human beings. Glad she found a new ride. I had a similar experience once (not with a Suburu) and I have to say that the added expense was worth every penny when my mind could devote the space allotted for worrying about if I had transportation to other things.

Things like that cool street bazaar. What a fun time that looks like, and I'm sure that weather was a little bonus for selling hot beverages.

I have a 2012 Subaru Forester that we bought used, and I love it (mainly for the AUX jack which was new to me, too)! I hope Kate has many happy, safe, and repair shop-free miles with it. Ali's Coffee Camper is very cool, and I know it would be very popular here if she's ever thinking about opening a KC&T NJ location!

Yay for new wheels - and an AUX jack makes this girl happy, too! The bazaar looks like a lot of fun and how wonderful that your park is going to get fixed up!

Y'know . . . I had a 2005 Forester that was also a bit of a dud. (Out of the 4 Subarus Tom and I have owned, that was the only problem-child.) If I remember right, that was the first year of a "new" Forester line = and there were some kinks. Ugh. I hope Kate enjoys her replacement Subaru as much as I've enjoyed mine. (And YAY for AUX jacks! I can't imagine driving without one now.)

Great said that, For my part, I travel not to go anywhere, but to go. I travel for travel’s sake. The great affair is to move.
https://www.imanali.in/