In other news: Weekending

Let's take a break from the travelogue, shall we?

I started a new knitting project on Friday night: a wee hat on DPNs. Somehow, I lost a needle while casting on, and then a second went missing. I searched around and under my chair & ottoman, and then had a look "inside" my chair. Gah! Right off the bat, I spotted a couple of crayons and stitch markers, some food (a veggie straw, an M&M, some nuts), and a DPN -- a bigger one that I didn't even know was missing!! 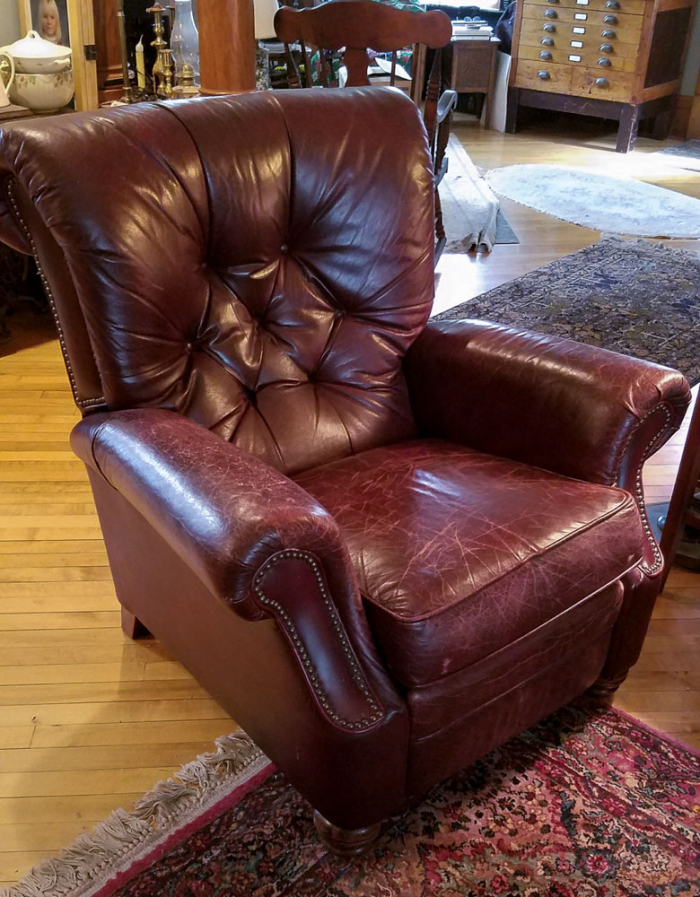 I decided that one of my Saturday projects would be pulling that chair apart to clean and reclaim some of that stuff! 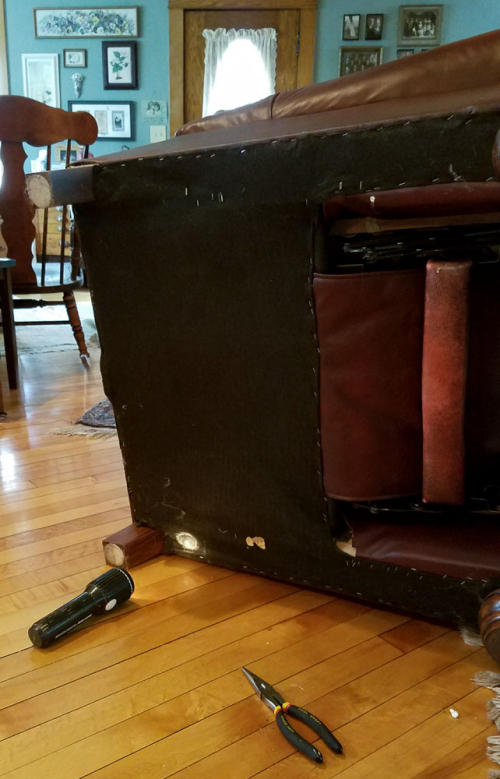 I turned it over on its side, and ended up propping it up on a box for ease of access. I pulled out a bunch of staples along the edge and, handily, found that a couple of super-size paperclips had also fallen in there, so I used them to hold back the fabric while I then wiggled & shook everything out!

I almost dislocated a shoulder! It's a heavy chair. 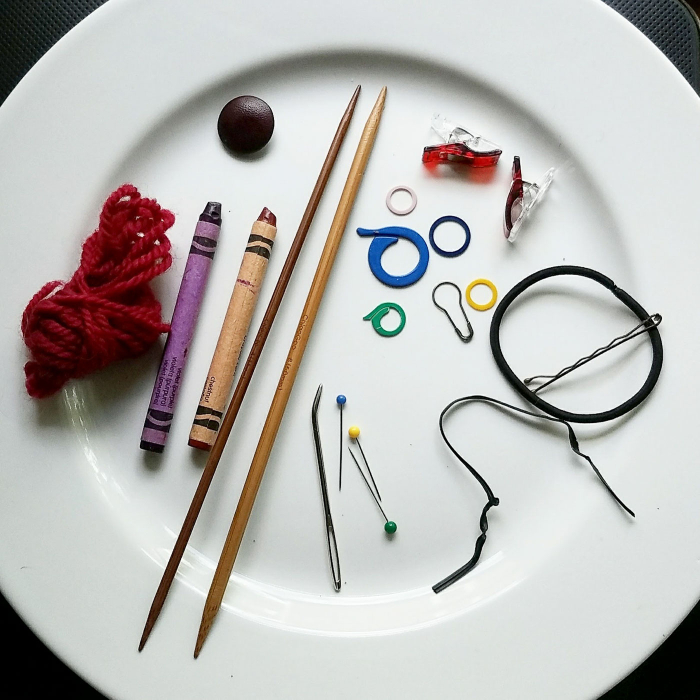 There's the "good stuff"! Haha. (I found the other missing DPN under a nearby chest.)

The kiddos were over for a while on Saturday, too. 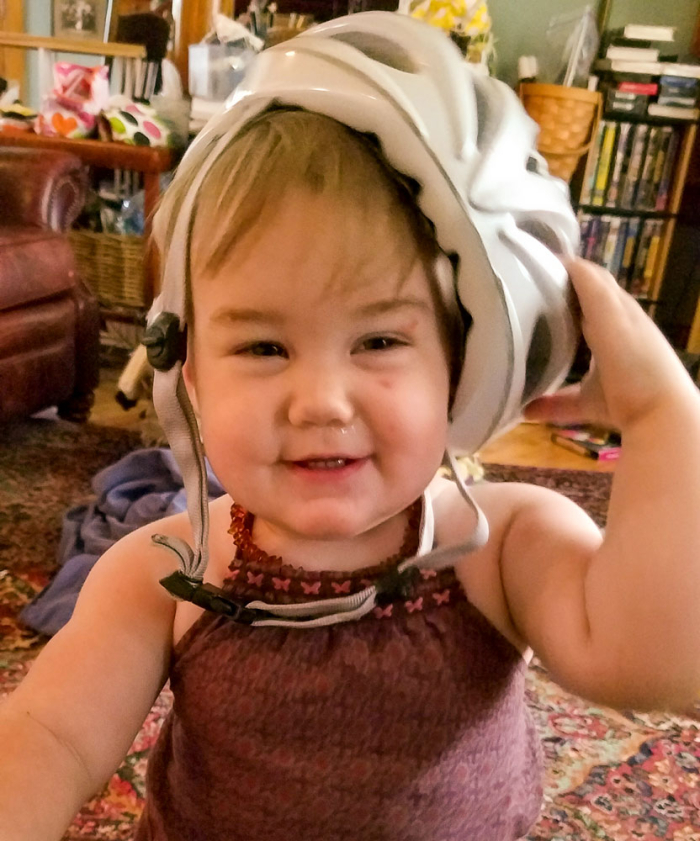 Gin is walking as if she's been doing it for weeks! She toddled in carrying my bike helmet. 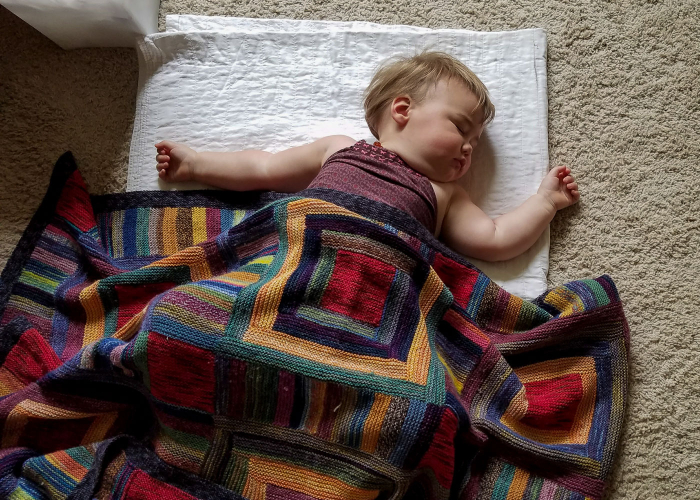 She was suffering a case of the summertime sniffles and/or teething... and took the rare (short) nap at Nona's house!

Maddy ran in & out again yesterday -- she's "home," but she's been very busy reconnecting & visiting with friends, so I haven't seen her much. A little downtime is forthcoming...

What else? It was a fairly low-key weekend at home -- kids & grandkids in & out, some knitting, some cleaning out & organizing, and a new sewing project cut out.

How about you? How was your weekend??

I had a chair like that-it ate anything that came close to the seat cushion. Even a paperback book!
Gin is getting so big-her smile lights up the room-

aw I hope little Gin is feeling more like herself, but boy she's cute when she naps! and yay you for the chair treasure hunt - that was some very adventurous exploring ;-)

Now I know where all my stitch markers go - your recliner eats them! I'm not sure I have the fortitude to investigate my own chair as I'm sure there would be plenty of yucky stuff coating any good stuff I might recover. Did you think about adorable grandchildren napping under Parcheesi while you were knitting it? I love seeing those photos!

Sounds like a great weekend, Vicki! I had such giggles watching your "treasure hunt" unfold over the weekend via Instagram. It's kind of frightening to look under the couch cushions!
XO

Oh she is so cute!

My darling lost his wedding ring to our sofa a few months ago and managed to retrieve it with the help of a metal detector he found in Home Depot and a bit of sofa surgery like you did. Then after a few weeks it went missing again (those men refuse to learn from bad experiences I tell you...) and we can't find it no matter what we do... we think it got stuck between some wooden pieces of the sofa's skeleton...

Hahaha - I was laughing at the food bits you found...I don't even want to get close to the recliner my husband usually sits in - it is probably loaded!! Gin is jut so adorable...hoping she is feeling better.

The amount of needles, markers, pins, clips and who knows what all, would be 5 times what yours is (I'm sure) were I to investigate my knitting spot. Maybe I'd find my glasses! Gin looks so peaceful and sweet sleeping beneath your Parcheesi. awww

I try to tip my platform rocker on its side every week or two to reclaim stuff. Stitch markers are the most common, but needles, change, and paper clips appear, too. And the amount of dog/cat/human hair is enough to clog the most powerful vacuum. (Ask my how I know.)