Actually, it's more like "Sew, the month..." as I haven't done anything but sew since I finished knitting my Colorwash Shawl!

First it was the Tom Petty Corset; all put together and awaiting binding (and the loss of a few pounds)!

I still wanted a Corset, though, and found some Batman t-shirts on clearance at Macy's. I love the fabric, but the design of these things is hiddy: 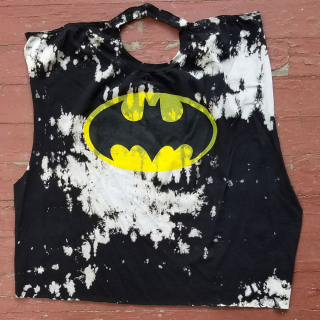 I'd already chopped & sliced that one up, but yuck. I had an XL and an XXL, the backs gave me enough fabric for the body and there was more than enough on the fronts to cut binding. 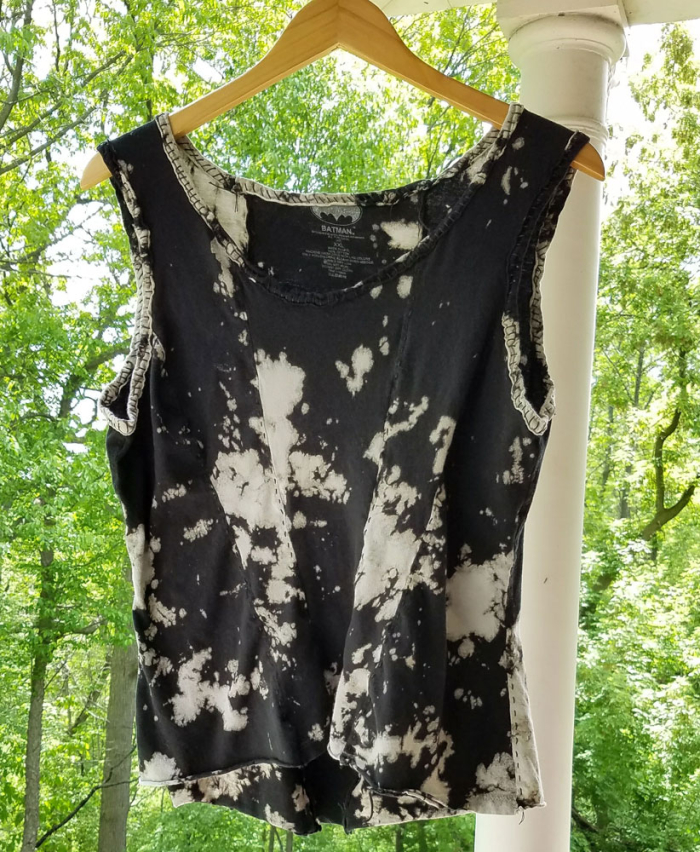 It's a little bit wonky. The fabric is 100% cotton, but much finer and lighter in weight than I'm used to -- medium weight is what I usually order from Alabama Chanin, often heavy weight in the thrifted t-shirts. 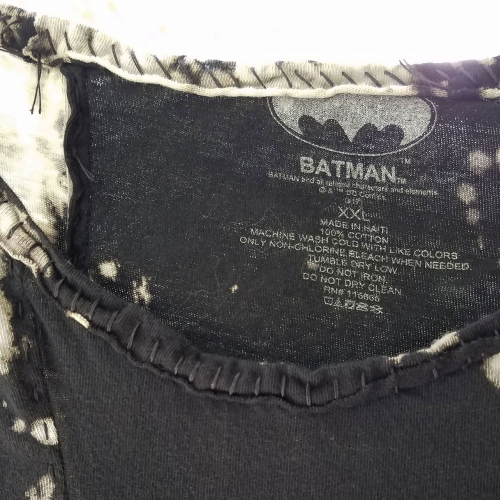 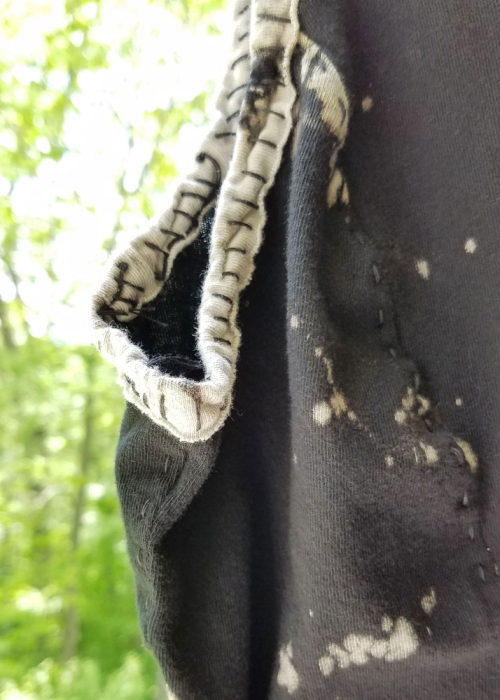 I checked a couple of times to verify that it was 100% cotton and not some combo with bamboo or something. It was slippery, more difficult to control, and it took a while to get it all sewn up. I like it well enough, though!

Since then, I've been working on the Alabama Chanin Magdalena A-line that I'd begun a year ago, in the hopes that perhaps I'd finish in time to bring it along on vacation. But first...

I "fixed" some sleepwear that I also want to take. 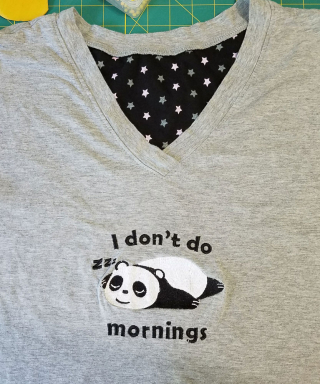 The heavy embroidered design was replaced with this: 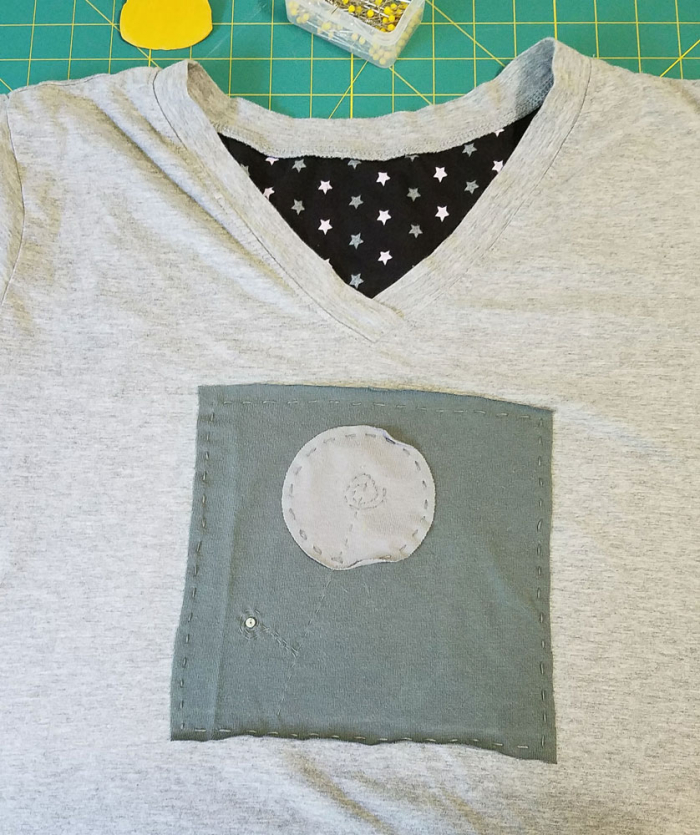 It's a little swatch from when I was contemplating ideas for Catamount. I'm so glad to have found a use for it! That one little sequin makes me inordinately happy.

And voila! I finished all the seaming of the A-line on Saturday night, so yesterday was all about binding. 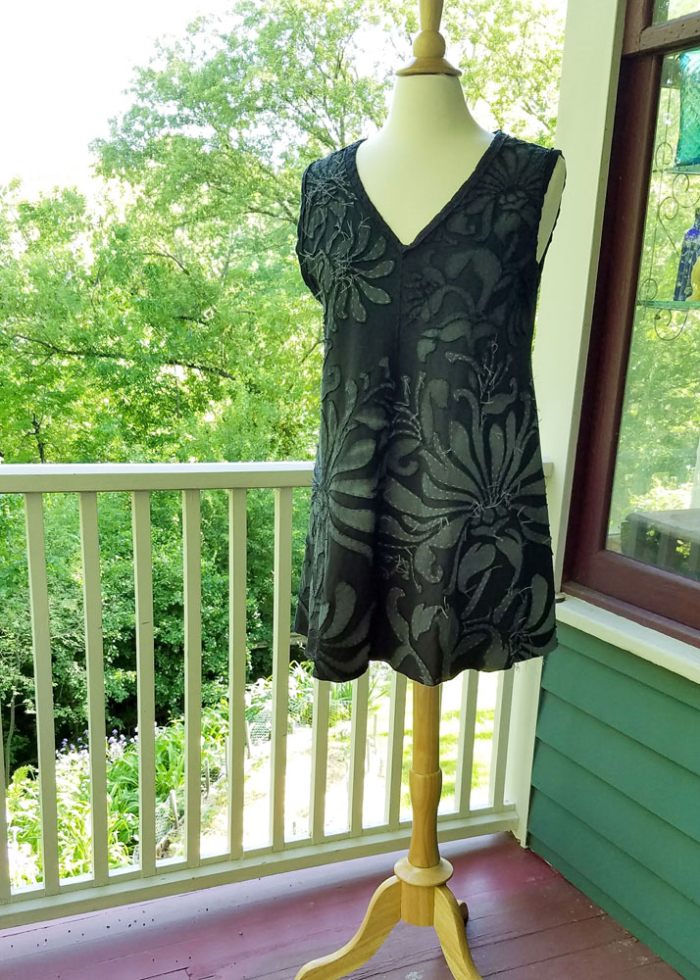 That dress form isn't anywhere near my size, but you get an idea. 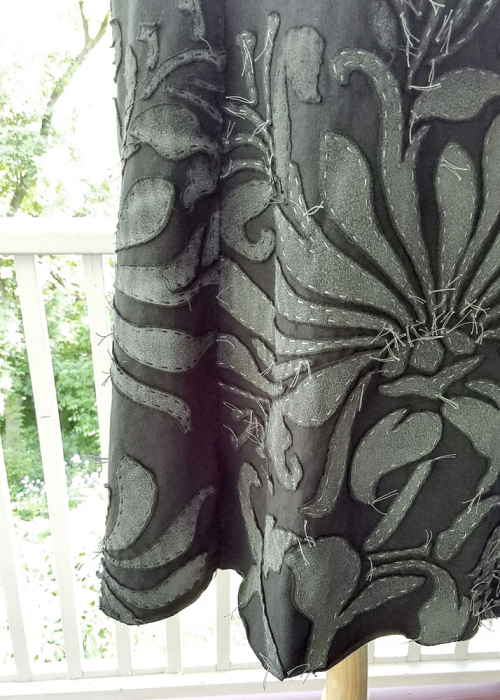 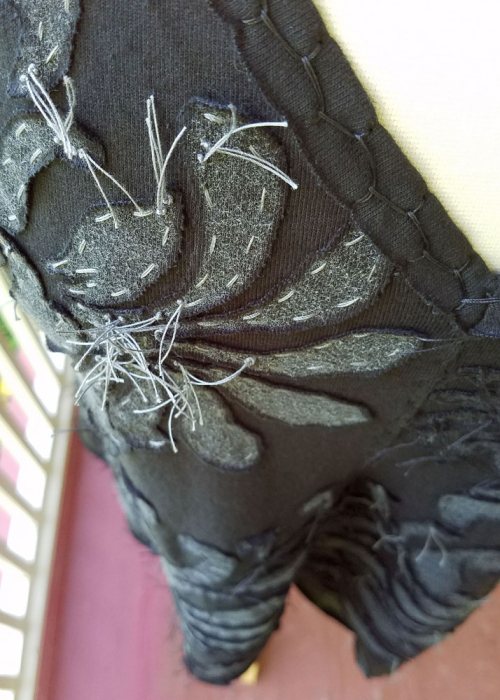 Cretin stitch... always a bit of a challenge for me, but I think I'm getting better! 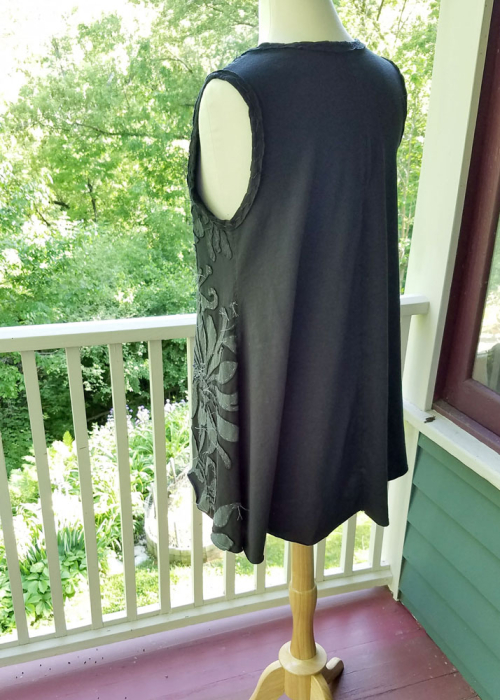 Originally, I'd stenciled pieces for the back, too, but I've left the back a single layer and plain for a number of reasons... besides time. One is that the technique used on the front is "lighter" than some. Another is that I'd placed the stencil on all four pieces in almost exactly the same manner, and have decided that I'd prefer some variation. I'm hoping to use those other pieces to make something for Gin! 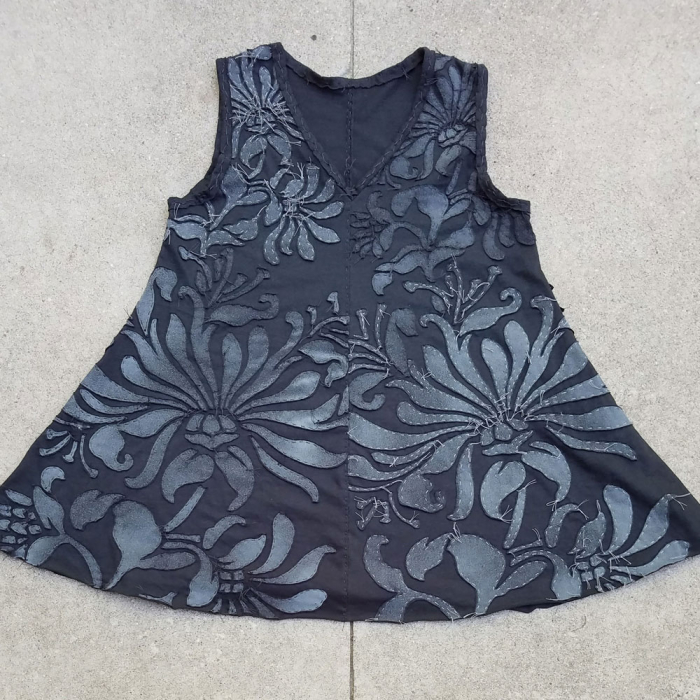 Anyway, here it is. I used a couple of different colors of thread for the sewing. The cutting (negative reverse applique) was CRAZY INTENSE with all those knots & tails on the outside, but I don't think I accidentally snipped short a single one of those tails!

It's crunch time now!! One more sleep at home, another sleep on the plane, and then our first stop: Dublin!

It's all wonderful, Vicki!!! You've been busy! I struggle with cretin stitch, too. It never seems to end out "even" somehow for me. (Maybe I just need more practice.) I'm so excited about your trip. XO

I think the best thing to say about all of this is WOO HOO!!!

Your sewing looks awesome - big accomplishments! You must be super excited about your trip!

Absolutely STUNNING! - not to mention impressive :-) Hope you have a few FO photos planned while you're away!

Nothing like a trip deadline to motivate us to make something, eh?! I do that, too. Have a wonderful trip.

Your one little sequin makes me inordinately happy, as well!! The top is fabulous and perfect for warmer weather (here and there). The corset looked good on you in the photo you took on Instagram! Sleep well! HAVE A SUPER TIME! I CAN'T WAIT TO HEAR MORE! xox

Wow. I am impressed and awed.
It's odd, with so many different blogs and websites mentioning Alabama Chanin (you, Fringe Association, MDKnitting) that I thought to visit her place in Florence Alabama over Memorial weekend. It is just 2 hours away from my home in TN, and 1/2 hour from a friend's lake house -- so three of us women went and were totally amazed. The "store" which really is a company in a factory type building, with a cafe, and other southern sundries had many of the sewn items of clothing. Just spectacular.
Looking just like your items! Honest.
Have a wonderful trip and wear with pride.

Oh, Vicki! Your stitching!! DIVINE!! Beautiful! Inspiring!! I am sending you so much love and good wishes for your trip! I can't wait to see IG photos and hear all about it when you get home! XOXO

Wow! Love ALL of your sewing (and the sequin as well). The AC tops are just amazing. I need to go look up cretin stitch. I've done a bit of sewing and lots of embroidery, but don't remember that one. Sweet dreams, safe travels, and can't wait to hear all about your fabulous adventure/trip.

Wow! That Magdalena dress looks fabulous. I *just* finished the Magdalena T-shirt today and was noodling around looking for posts and comments on the bolero pattern, which I plan to make to go with the T-shirt.

Your Cretan stitch looks good. The trick I used for keeping it consistent was counting the ribs on the fabric. I found that six ribs between one anchor point and the next was a good distance.