Are we really at the mid-way point of the year?? It's hard to believe... though June went Whoosh!! 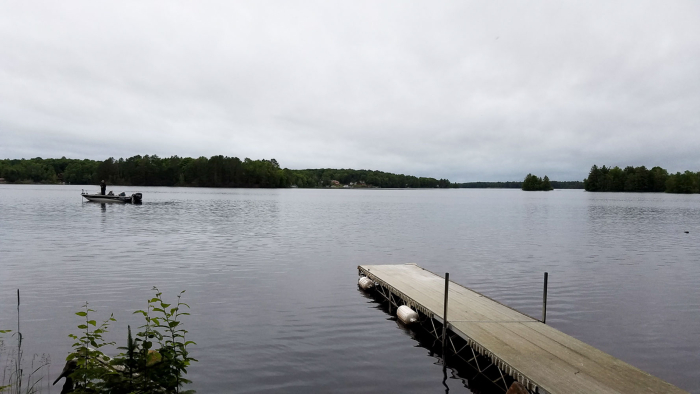 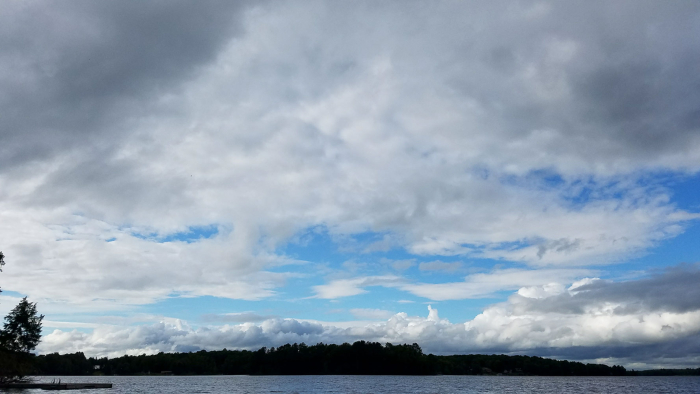 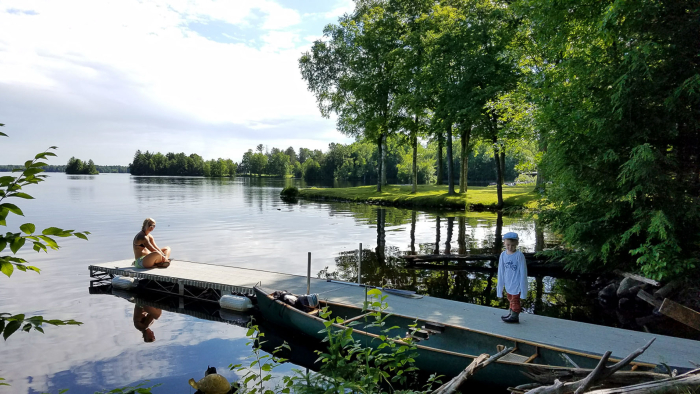 We ended June and began July with a pre-4th of July trip up to the Flowage and a few days at my uncle's cabin. The forecast wasn't spectacular, but it was good enough (better than expected), so there was plenty of walking, bicycling, canoeing, Skip-Bo and Bananagramming, building with Legos, and just hanging out on the dock. We returned on Sunday, and enjoyed Monday off of work in addition to the holiday. Not a bad deal. 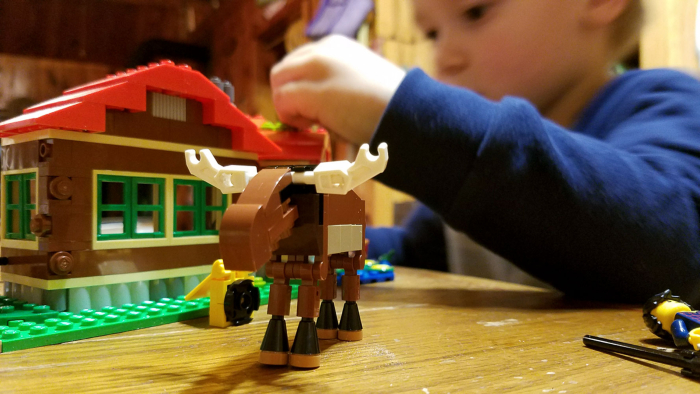 Other than Auntie Camp (commencing on Wednesday!) and a wedding in Madison later this month, it's a "normal" month... for a change. There's actually nothing huge on the calendar for the rest of the summer... another wedding coming up in September, a possible few days in Door County in October, and then some fun stuff around my birthday in November.

Anticipating... A fun few days with Mack & Addy and our 3rd Annual Auntie Camp. This year, we plan to do some tie-dyeing with fiber reactive dyes in addition to indigo (because it ain't Auntie Camp until someone turns blue). The boys also want to do a little knitting, and make some bookmarks. I'm going to try to involve Junah in some of the dyeing -- even if he just wants to watch! New this year is a likely paddle/camp excursion with Cousin Maddy (pray that the weather cooperates).

Eating... Zoodles! I love them so much that I bought a Spiralizer, which will pay for itself in no time given the cost of spiralized zucchini at the store (and not as expensive as I remember)! I love how quickly they can be made, and how delicious! My favorite right now is a stripped-down WW recipe: Sautee the zoodles for a few minutes, add some fire-roasted diced tomatoes, salt, pepper, and a little smoked garlic, stir some more, serve with a dollop of whipped cream cheese and a sprinkle of parmesan and fresh basil. So good!

Also, I finally made my first batch of Greek yogurt in the Instant Pot! I'll be making more of that (Gin loves it), but probably in smaller batches; I didn't need to use a whole gallon of milk! In addition to perfect-every-time hard-boiled eggs in the IP, I've been working out the timing for a steamed artichoke!

Knitting... Currently, a stealth project with a deadline. Two colors, stripes, I can't say much more than that... I'll share when I am able!

Looking forward to... Getting some things done at home! 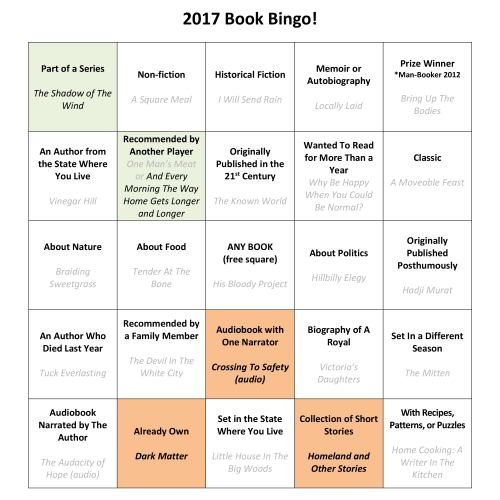 The Shadow of the Wind (audio) and And Every Morning the Way Home Gets Longer and Longer (pages); soon: Hillbilly Elegy. I don't know whether I'll get a BINGO this year. You'd think with all the planes, trains & automobiles that I've been in lately that I'd have made some progress... but no. I've realized that I make more progress on knitting & reading while traveling... ALONE!!

Watching... American Gods. I finished it, actually, but have the urge to watch it again. It was... verrrry interesting. I never read the book, nor (shall I admit it?) any of Neil Gaiman's books. I didn't think I was "into that," but maybe I am? Things change! Also, Maddy and I just started The Handmaid's Tale!

Wondering... What's up with you?

I think Legos may be the perfect toy! I've saved ours for any future grandchildren and also because I love them. I look forward to photos from Auntie Camp every year, and can't wait to see the dyeing and paddling this year. Now you've got me thinking about an IP and Spiralizer. Hopefully I'll soon have too many zucchini ...

I think trips like the one you just took don't lend themselves to reading much - too much sightseeing to sit still and read! A vacation like the one I took in Maine, though? Perfect for reading - I finished 5 books over the course of that trip and the few extra days off things to the July 4th holiday.

I've been debating about a spiralizer...So many things you can use it on! Your Lake pictures are so inviting...I want to be there! Shadow of the Wind is another of my favorite books (along with Crossing to Safety), so I'll be interested to see what you think.

I tried to watch American Gods but... I missed something vital and just couldn't wrap my head around it. It was so well done, though, that I almost kept watching for the production value.

I have on my list to check out American Gods, thanks for the recommendation! Also, I will be watching eagerly your Factory Dress... and to photos from Auntie Camp!

I've read a bunch of Neil Gaiman and love every one of them. The Graveyard Book is a favorite, as was American Gods (and Neverwhere) . I'm toying with the Instapot purchase as PERFECT eggs! I'm with you on the zoodles. Smith? Not so much. Auntie Camp! I'm looking forward to it!

Did I miss your post on what you packed for Europe...your most used and most not used items?

That moose - and of course that sweet face - just makes me smile! I'd say your July is going to be chock full of good stuff. I hope you get a chance to savor all the wonderful moments! (oh and p.s. my grocery store was OUT OF zucchini last week. it's on my list again!)

I heart Neil Gaiman, but, that being said, I have trouble with some of his books. Too hard. American Gods was one of those, but I suspect that being able to watch it might make it make more sense to me.

Your summer sounds so adventurous, fresh, colorful, and happily done. Good planning!
I've read lots of Neil Gaiman, his writing is odd but it adds flavor to the mix. I've already done "Grandma Camp" and loved every minute. I am knitting and sewing a little - mostly making t-shirts shorter, fixing torn items, and trying to make a simple sleeveless linen top.
I also am wondering about your European clothes list!
I have heard so much about this Instant Pot, but I have only so much room. Do you use it a lot?

Summer is great, isn't it? I know you'll have a great time with Auntie Camp -- can't wait to hear all about it! And I'm eager to see how your Factory Dress turns out. I was just about to start another, but know I've got the wrap dress pattern waiting for me when I get home from vacation. . . . so I'll probably try that one first. ENJOY every moment of the summer!

Auntie Camp-can I come? My only nephew lives far away and never travels to me-Legos were a favorite of my twins for years and years- I'm reading a lot but not liking a lot of what I try to read- my new policy is to stop reading if I'm not liking the story or characters. I can always go back and try again. Washington's Farewell Address is next on my list. Good luck getting to the dress. Everyone I know is getting or has an Instant Pot but I'm not convinced since it is just me. And counter space is limited. I'm knitting a shawl for Loopy Camp that I hope to wear at my DD's wedding in Sept.
Thanks for sharing. How does Maddy like being home?