My nephew Sam, Brian's eldest, married the love of his life on Saturday. He fell in love with Anna within seconds of meeting, and just "knew." He began saving for the engagement ring after their second date!

The wedding was held in the rooftop garden at the Madison Museum of Contemporary Art, and it was lovely. Anna is gorgeous, and made a stunning bride. 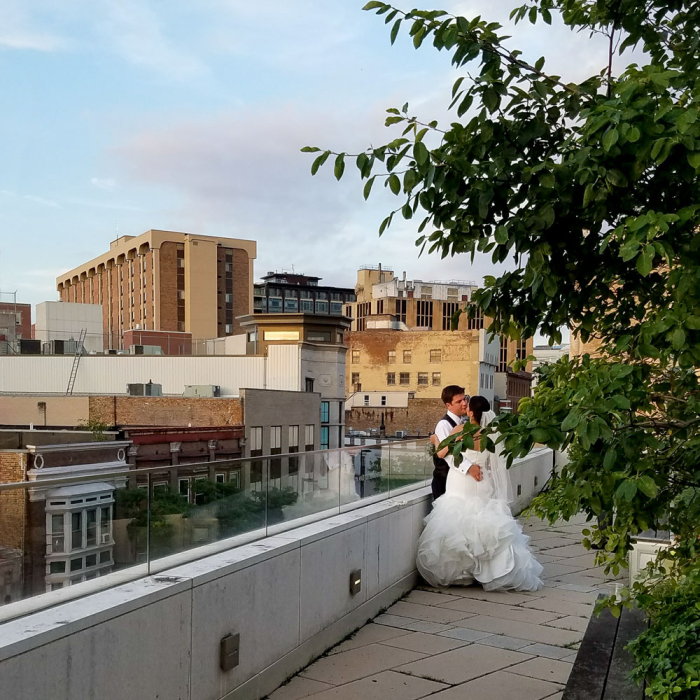 The photographer was just on the other side of that greenery while I creeped to get this lovely image of Sam & Anna dancing.

Oh my goodness, the DANCING!!

Much to their amusement, I told the boys during Auntie Camp about Sam's late-night surprise performance at my brother's wedding, 16 years ago, shocking everyone -- no one more than his father -- by dancing a joyful solo to Michael Jackson's "Billie Jean." Sam had been as relentless in requesting the song as the DJ had been in resisting, but it was finally spun at the end of the night and I am not kidding when I say that jaws hit the floor.

The DJs on Saturday were also resistant, but Mack was collecting names and, well... Kate & I were 29 & 30 on the petition, I believe. Haha! Resistance is futile. Finally, they played the record and people crowded the dance floor -- including Sam and his brothers for a reprise.

And inspiration... the youngest of them were shy at first. 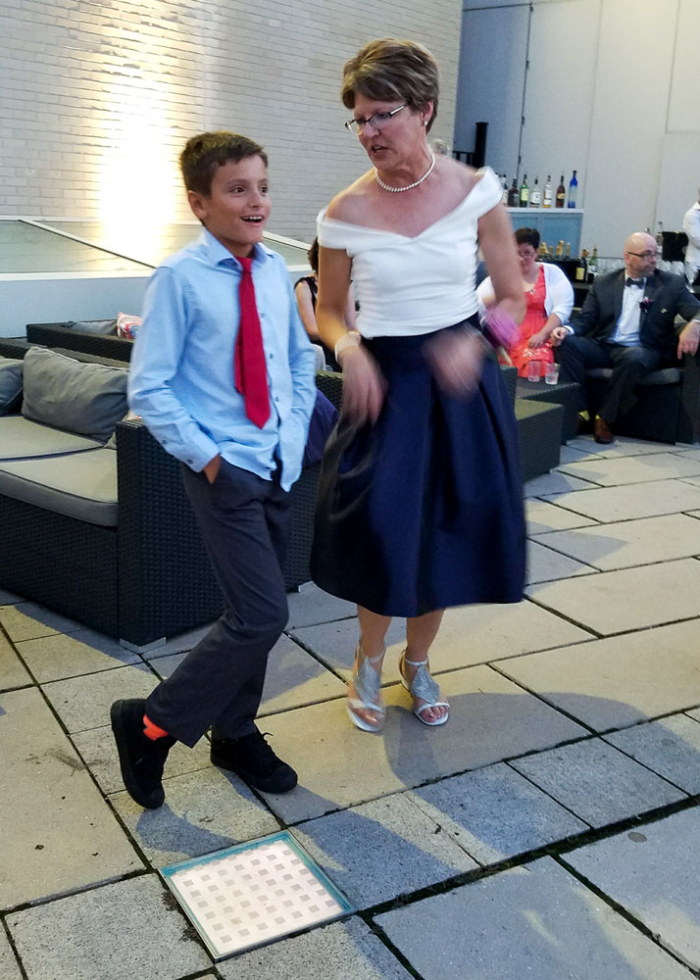 Addie & Ann. It all starts with one move (oh, the orange socks)!! 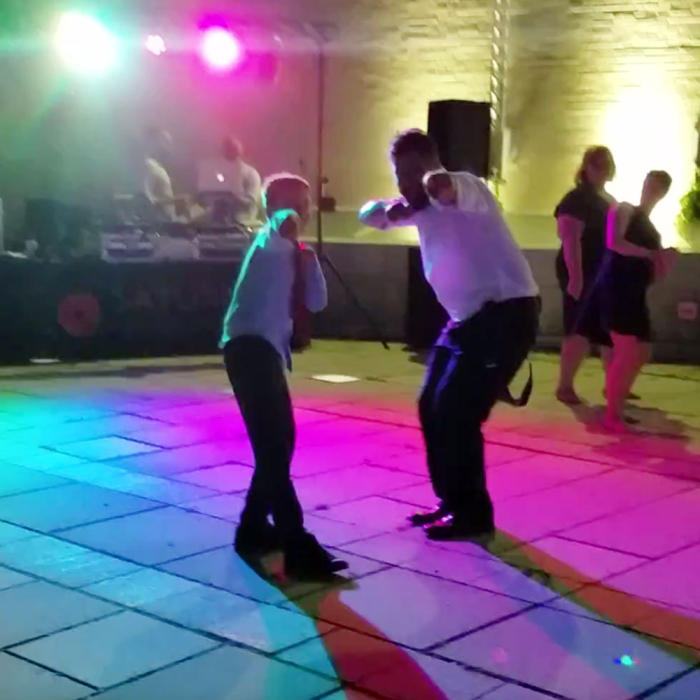 There was no stopping them. Solos, trios, quartets, crowds; with their mother, aunt, brothers, cousins; they danced all night and it was delightful. 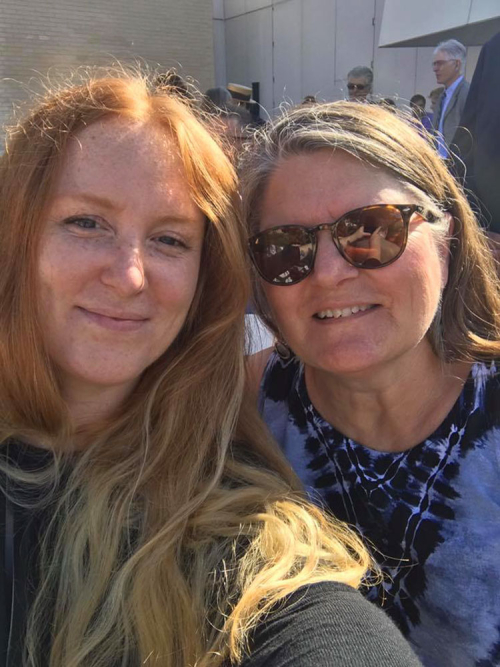 And then I made dinner. Roasted Tomatoes & Cipollini Onions with White Beans from The Smitten Kitchen Cookbook, which I nabbed last week from Ann's pile that was destined for Half-Price Books. 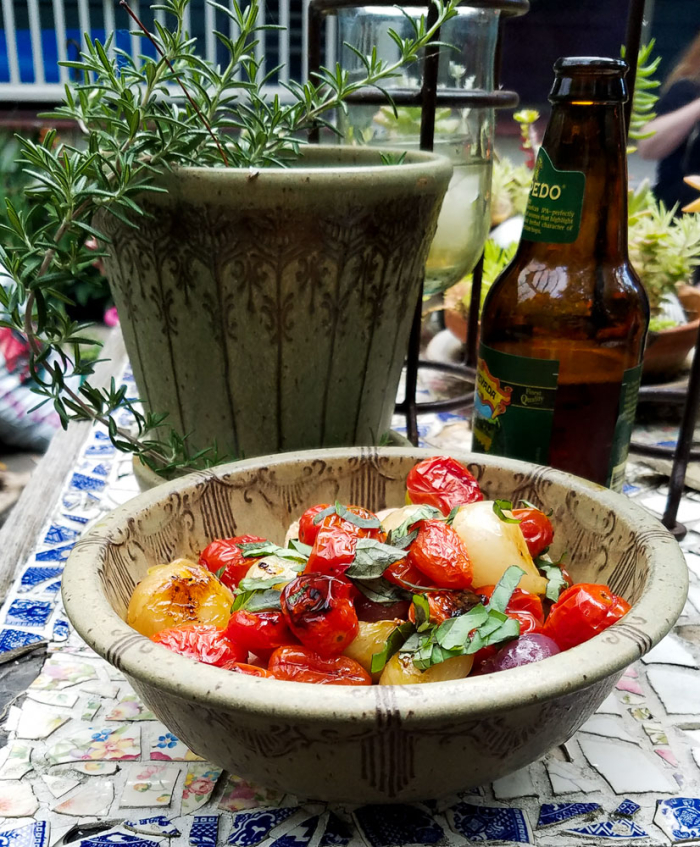 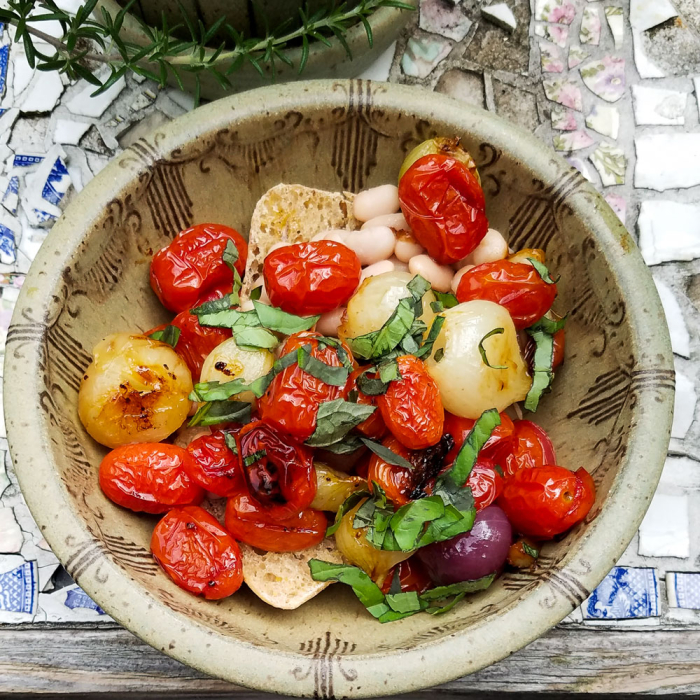 It was delicious, pretty easy to put together, and so good. "I can't stop thinking about it" good!!

I hope you had a good weekend!

Family weddings are always such fun, sounds like yours was epic!

What a wonderful, terrific, celebratory wedding! My family is nigh onto impossible to get out onto the dance floor, and we probably won't be having any weddings for a while, but I hope there are a few more opportunities to dance like your family. And that salad! I will definitely be making it this week (and possibly eating the whole thing myself)! Thank you!

Oh what FUN! and even better that it was celebrating two dear people starting a new life together. That venue is spectacular, too. Hope you have more time to recover today!

I saw your pics on IG - they were fabulous in sharing the 'moment' each represented. And I love that you passed on a perfect family story at just the right time.

Fun, fun, fun. What a great time! I have to find that recipe - sounds wondrrful.

What a blast! And I have that cookbook on a shelf...thanks for the incentive to take it down and open it up!

Summer family weddings are so nice, it's like a mini reunion.
I have that cookbook too! . . . ditto what Patty said!

How fun! And, that salad looks so delicious!

Your family certainly knows how to have a good time, a memorable time! The bride and groom look so beautiful in all the pictures. What a lovely day. Dinner looks marvelous! "Oh my" good!

So much fun! Dancing is such a joyful activity -- all the better at a joy-filled event. (LOVE those orange socks!!!) XO