Spain: Valencia On Our Own (Day 6)
Dear July,

We bid fare-thee-wells on Tuesday morning, sending Ann & family off to work/school. No one was too sad, though, because they'd all be state-side within a month or so! (In fact, I am gearing up for 3rd Annual Auntie Camp set to begin July 12th!) 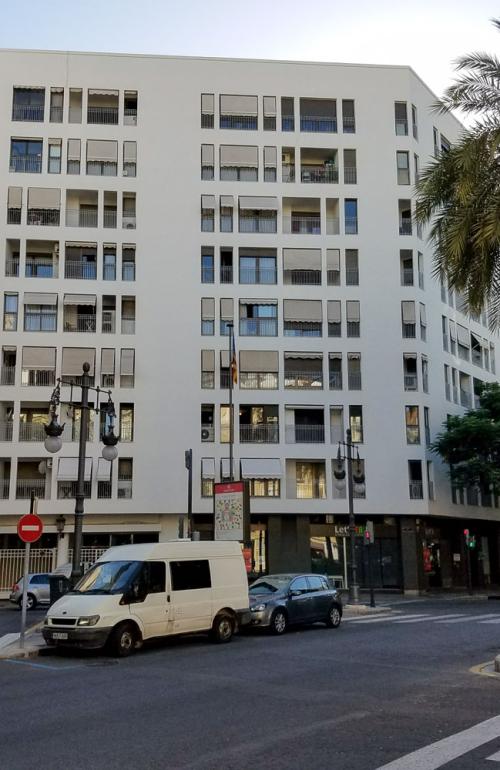 On our way to the train station, we stopped by Dulce de Leche at Brian's suggestion. 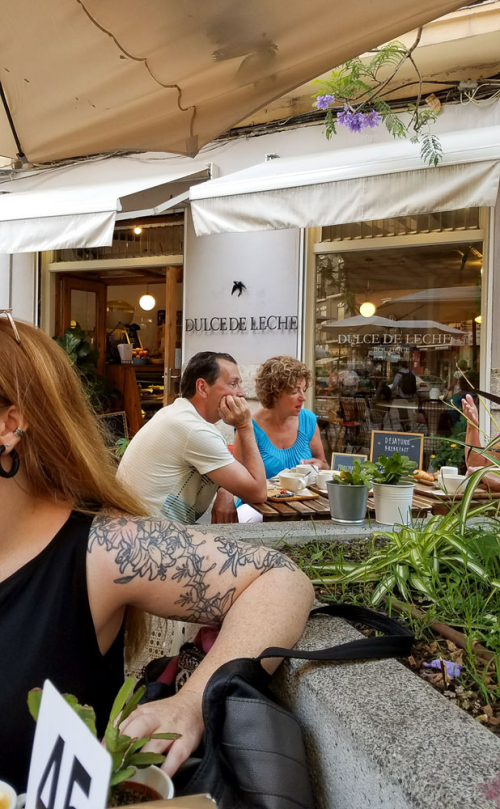 I had severe camnesia, and regret that I didn't take any photos inside... the bakery case was incredible!! Take a gander at Instagram for an idea. So good.

Then it was on to Madrid to begin our journey home. 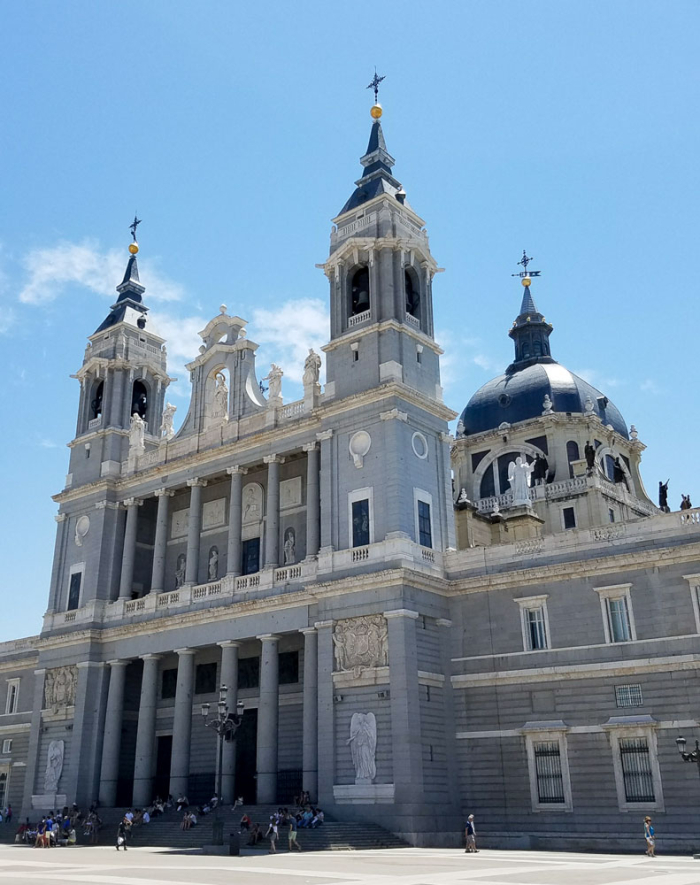 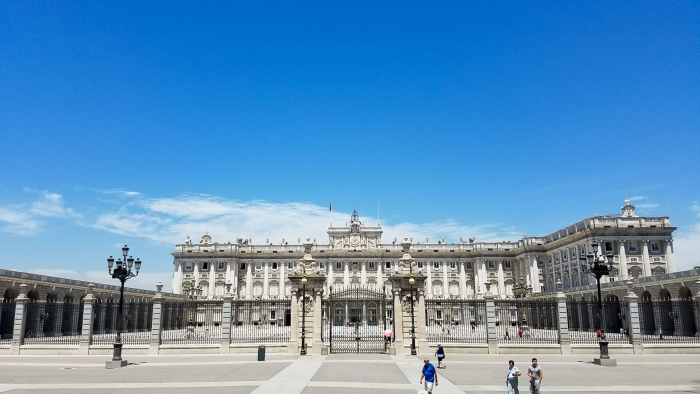 From the taxi, on the way to our Airbnb, we noticed that Catedral de la Almudena was practically around the corner! I hadn't even noticed that it was right next to the Royal Palace of Madrid. 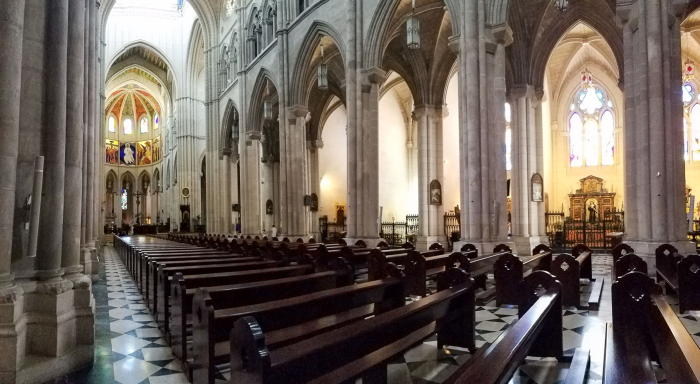 The cathedral was, of course, AMAZING! 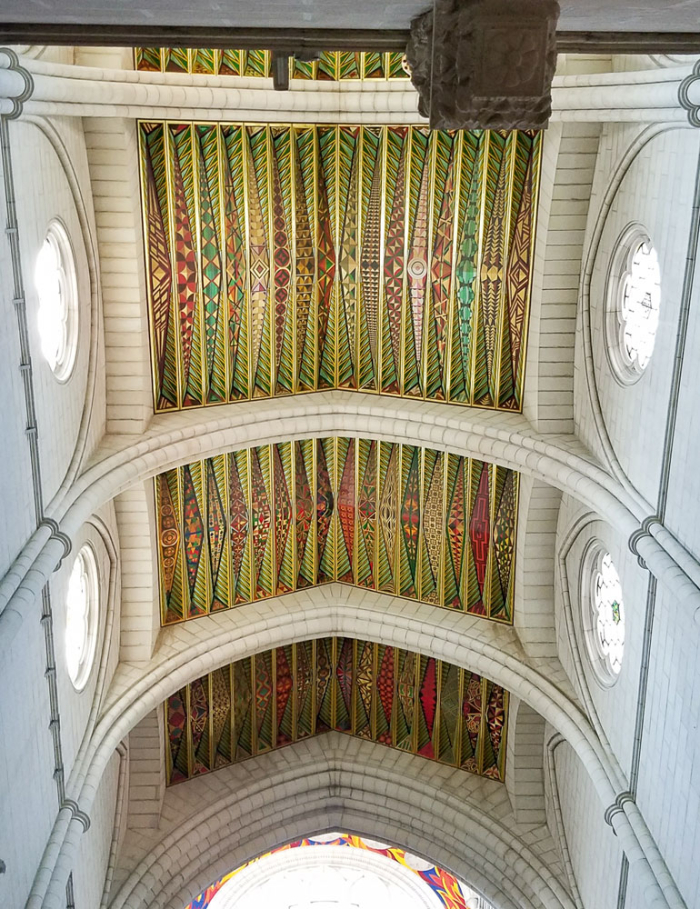 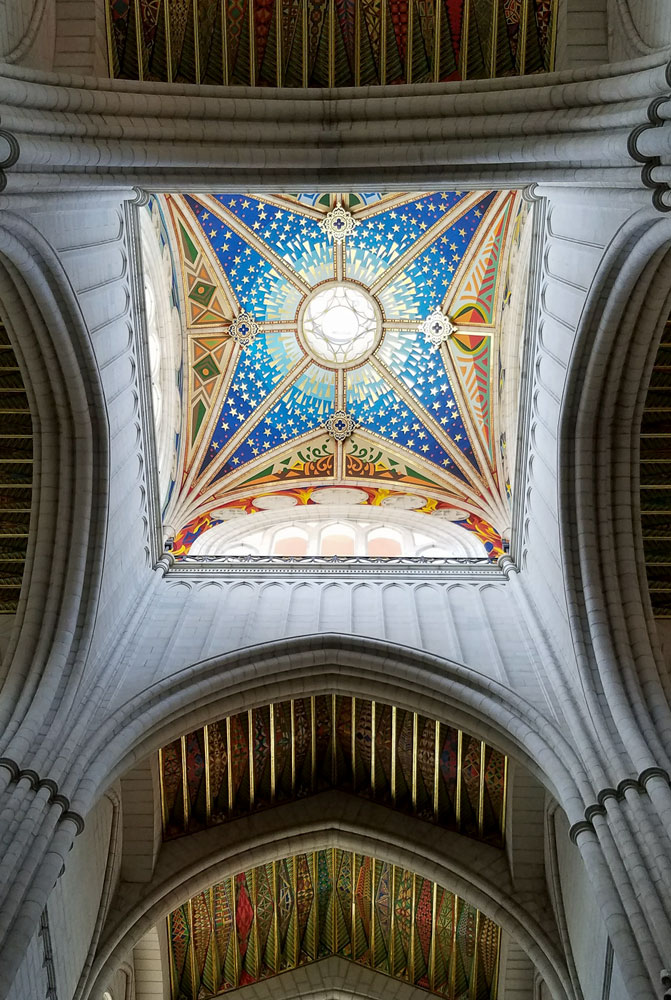 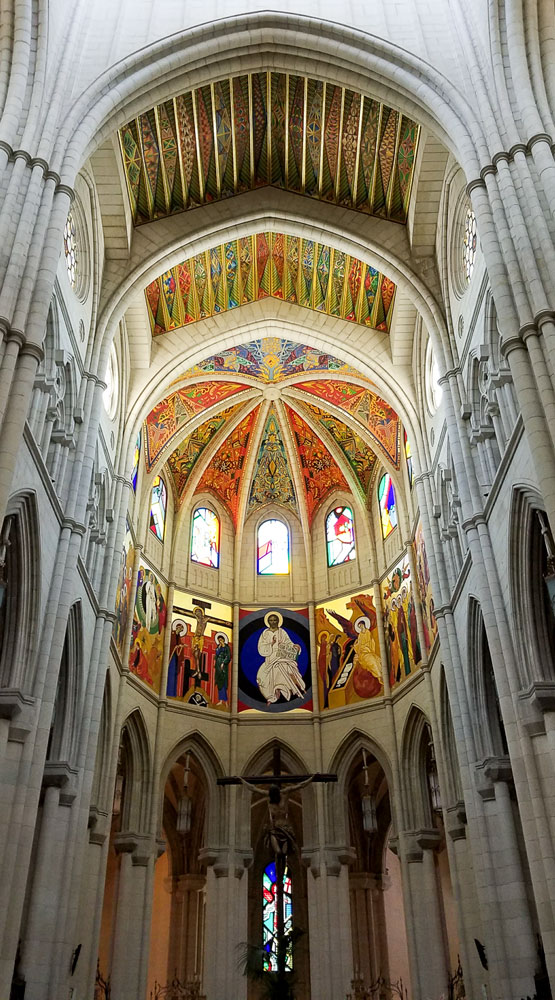 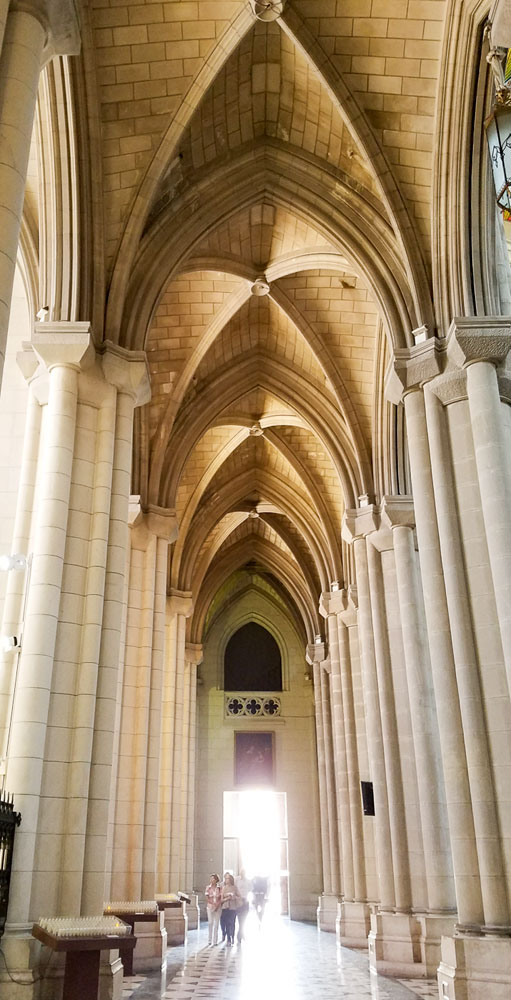 Party on the ceiling!! It was incredible, and one of my favorites.

It was SUPER HOT and very sunny, so we didn't go too far in search of food & drink. We found a shady spot under an umbrella at el camarote and enjoyed a nice cold cerveza and some delicious tapas. Our server seemed to take a liking to us and treated us very well!! 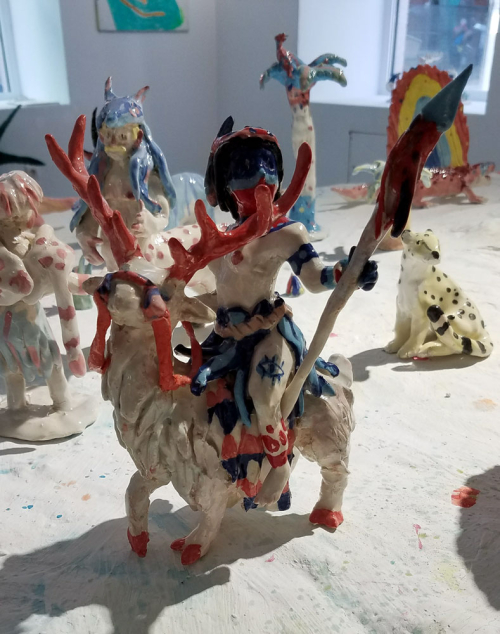 Maddy hung out at the apartment, while I accompanied Kate to visit an artist-run gallery space that she'd previously connected with through Young Space. It was really fun to find ourselves in Madrid with enough time to stop in! 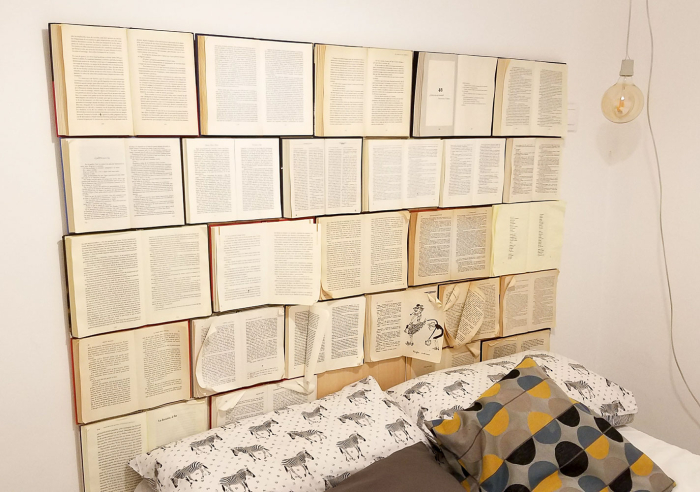 Then it was back to our Airbnb to chill for a bit and then go to bed early. We are willing to admit that the "open book headboard" totally won us over when we booked this place... though it was a bit less "ruffled" in the photos on the listing! 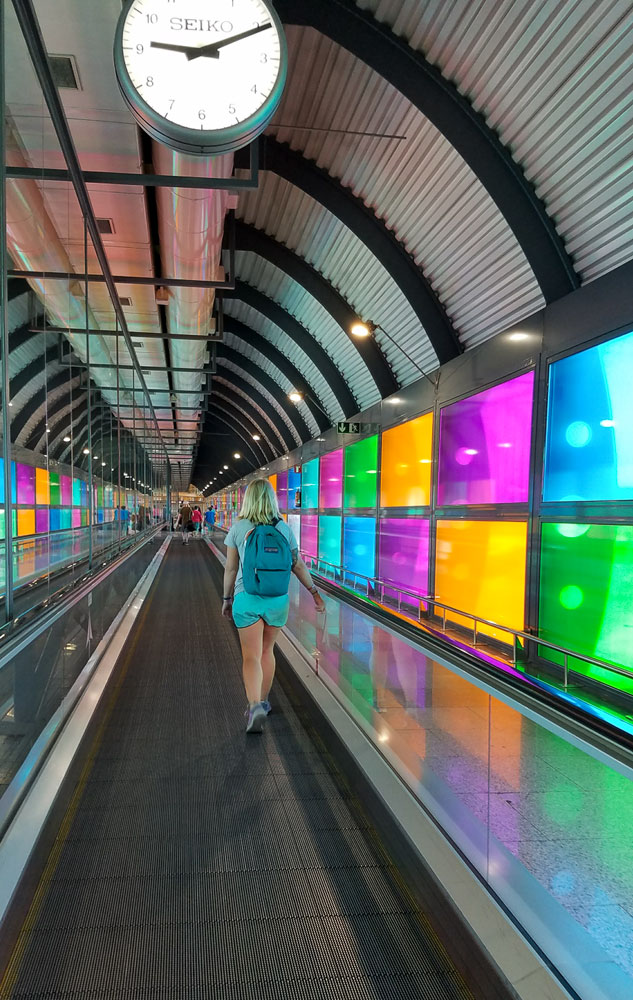 The next morning (Wednesday), departure from Madrid. We had a short layover in Dublin, and then were on our way to Chicago... scheduled to land at about 6:45 p.m. 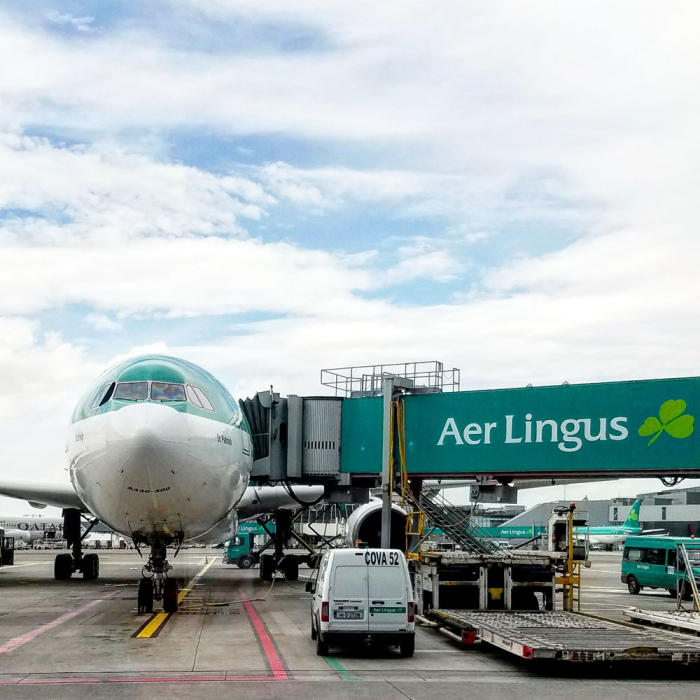 ...well, that was the plan. Everything was wonderful -- we were even on course to arrive about :45 early -- but it all fell apart mostly due to weather/weather-related backups at O'Hare. We were detoured to Detroit "to refuel," but then ended up sitting on the plane for 3 hours while waiting for Dublin to make the decision about whether we would continue. Eventually, and by then, they decided that some of the crew were too close to the limit on hours (to make the one-hour +/- flight from Detroit>Chicago) and we all got off the plane. Flight cancelled.

It might not have been so bad if we'd been on another airline, but I believe this may have been the first landing of Aer Lingus at Detroit. There was much, much confusion & delay... and long-story-short, there were no hotel rooms, no other flights available until Thursday evening, the promised "buses to Chicago" never arrived (at least while we were there, and with more than one false alarm), and the little coffee shop/deli had been all but cleaned out.

We ended up booking a train in the wee hours of the morning, taking a Lyft ride to get to that station, arriving before it even opened, and having breakfast at Tim Horton next door. The coffee was good. 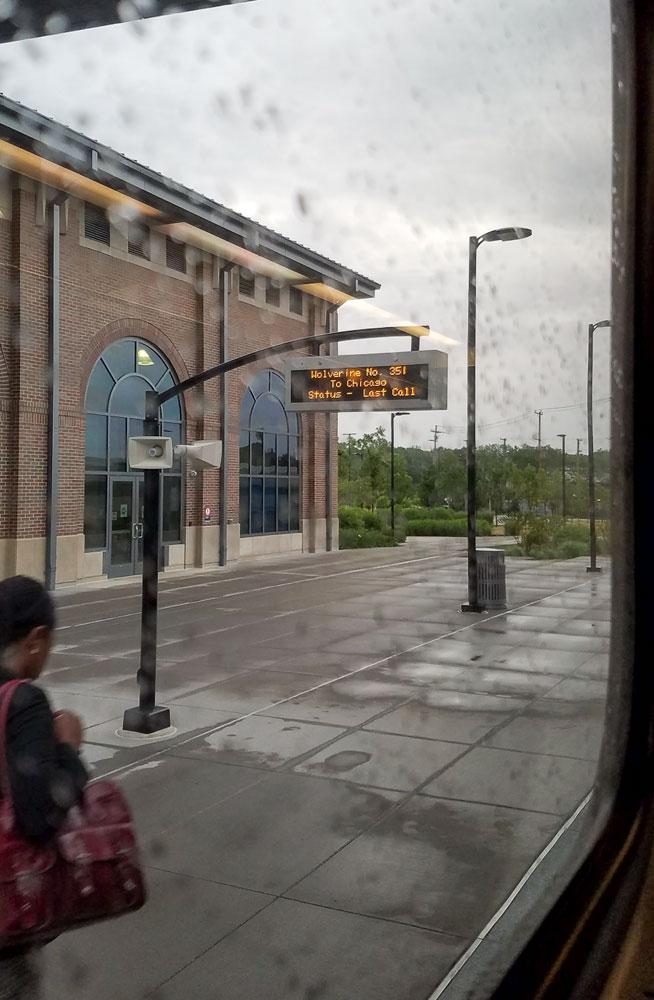 We snoozed a little on the train (those seats are not very comfy), after little to no sleep overnight at the airport (those seats were even worse). We took the Metro to O'Hare to get the car, found some food, and then drove 3.5 hours home, switching off pretty frequently because OHMYGODSOTIRED.

About 24 hours after we were originally supposed to land in Chicago, we finally made it home. I was in bed by 8 and slept like a log. I'd originally taken Thursday off to run around and take care of some details with Maddy (and do laundry and recover), but instead begged off Friday morning to at least accomplish the most important of those things. Thankful for an understanding workplace and no complications!

I totally jinxed it, by the way, commenting way too early on how smoothly everything went during our trip! When you think about it, though, we had some pretty crazy connections and had purchased all of our train tickets in advance, along with our tickets to The Book of Kells and La Sagrada Familia -- any little delay along the way could have thrown a wrench into our plans. It all worked out.

I wish that O'Hare had chosen a more Detroit-friendly flight to divert instead of us, and I wish that Dublin had allowed personnel some leeway... but in the end, it all worked out. My experience on Aer Lingus up to, and even after that point, was really quite nice (there was one flight attendant who went above & beyond in Detroit -- as did all of the airport personnel we encountered), and I wouldn't hesitate to fly that airline again.

By the way, upping my organizational game, I used Tripit to manage everything (I opted for the Pro version) -- flights, trains, tickets, lodging -- including Maddy's separate flight itinerary, and it worked wonderfully! In addition to having everything in one place, easy to see and navigate, I found it extremely helpful in managing time.

I've enjoyed your travelogue so much that I had forgotten about the end. I'm not sure humans will ever triumph over weather-related delays, but travelers still need information, options, food, and sleep! I do love the ceiling of that cathedral, and am imagining some of those stunning colors and designs as part of a quilt somehow ... and the Young Space Madrid connection is also pretty cool. Thanks so much for sharing your epic travels with us, and I'm glad to hear about Auntie Camp coming up!

What a marvelous trip! Aside from the very end, of course. That cathedral is simply stunning in your pictures...even more so in person I'm sure. Interesting headboard - got me laughing. The artist run gallery looks really cool too.

I think I said this to you already but, if a trip is going to go off the rails it's better on the coming home end. Still, I can only imagine your frustration and exhaustion. So glad everything else about the trip was wonderful!

Thank you for pulling all of this together to share with us! What a trip! I'm sorry you had to re-live that last little bit to write this post ... but at least it was at the end and you had flexibility - plus stamina and two more seasoned travelers! - to help you get through it!! and YEAH for Auntie Camp next weekend!!!

Good thing you have travel experience and you know how to use technology to your advantage. Only the weather could have caused you trouble, as you'd planned so well. Every leg of your journey has been incredible and I appreciate the quality (and quantity) of your photographic evidence. The ceilings in this post do not disappoint. The ceiling extravaganza has been like a party that never ends.

Loved hearing how you triumphed over the tough stuff in the end. My hubby and I are headed to Norway next month so I'm planning to look up Tripit. Thanks for the suggestion. I hope you are still planning on outlining your travel wardrobe - i'd love to hear what worked or didn't.

It's really too bad that your absolutely-divine-trip had to end with that bad taste in your mouth! I absolutely hate flying through O'Hare (I know you don't really have a choice, but I use Detroit every time over O'Hare). O'Hare gets SO backed up SO easily! The only flights Tom and I have ever had canceled on us (and Tom used to fly A LOT) were through O'Hare. Always if-fy. Ugh.