Unraveled Wednesday: Beatrice
On the road to St. Louis

Whew! I finished listening to The Shadow of the Wind yesterday afternoon! I really enjoyed the performance by Jonathan Davis. The story(s) was good and I definitely had some favorite characters. It was especially cool because I actually visited Barcelona this summer. I looked on a map for some of the streets mentioned in the book -- some of the story having taken place near the area where we stayed. It sure dragged on here and there did seem long, though. Maybe it's just me! Well, no, it is an 18-hour listen! 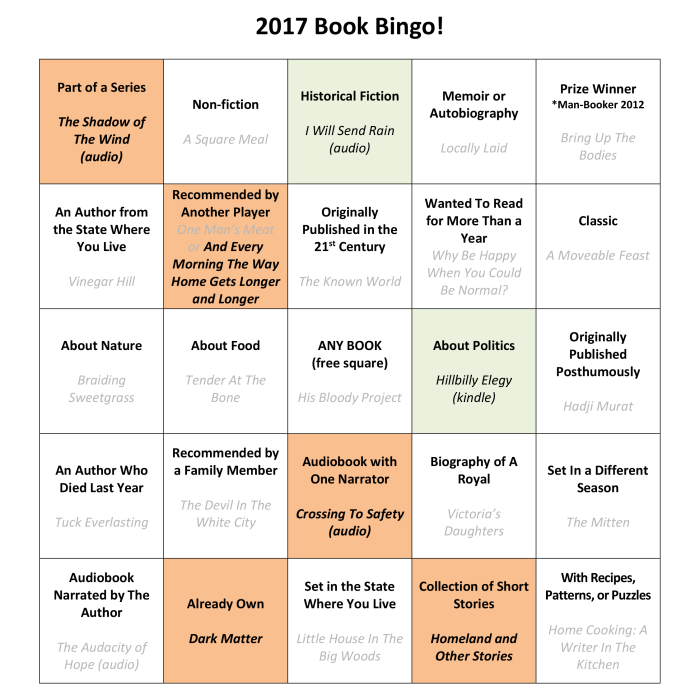 For my next audio book, I've chosen I Will Send Rain, which found a place in the "Historical Fiction" square of my hopelessly Bingo-less card. (Obviously, that was never the goal!) It's a much shorter book, at only 8 hours, and maybe I'll even get another one started before the official end of 2017 Book Bingo on Labor Day Weekend.

Your card may be bingo-less, but it is not lacking some great reads! I hope you enjoy I Will Send Rain more than I'm enjoying my current historical fiction book. If I wasn't almost halfway through mine I'd be looking for yours on Overdrive!

It's all about enjoying what you're reading and it sounds like you are! I like the way you colored in your Bingo card, too!

I'm with you being bingo-less, but having fun anyway. Did you like Hillbilly Elegy? I've been debating about reading that...

Your card has some GREAT books on it! Bravo to you on your reading!

Bingo - schmingo! You read some great books this summer -- and that is the TRUE bingo! (And 18 hours for an audio book is a very long read! 9-10 hours is much more typical, representing about a 350-page book.)
XO

I love the way you checker boarded around the card. Shadow did drag in places, but I found it unusual and fascinating (most of the time). You've read some great books and THAT's the goal.