Acknowledging... On Monday, I had reason to count ahead some weeks on the calendar and realized that it's only SIX WEEKS until my birthday, HAMILTON in Chicago, and a trip to ALABAMA & TENNESSEE. But that's November and this is still September! (But, only six weeks!)

Anticipating... An early October quick get-away with Rusty to the U.P. (That's the Upper Peninsula... as in Michigan, for those not from 'round here.) We're staying at a little lake resort cabin in a place completely new to us, and plan to hit the Lake Superior shoreline and also do a little hiking. I've had reports that the fall color should be pretty great!

Avoiding... some bookwork that I really need to buckle down and do.

Eating... Pretty well. I wasn't good at meal planning over the summer, and am committed to doing it more. The two classes that Kate teaches at UWGB are in the early evening and, especially with the increasing darkness and because Winter Is Coming, she will likely stay at our house those evenings (saving about 20 commuting miles each day). I/we have recommitted to planning for at least those days! Last night it was WW Italian Spinach & Tortellini Soup (yay SOUP!) -- a double batch for the whole family (plus leftovers for lunch) -- over for the football game.

Happy... to learn yesterday that Natalie Chanin is working on a new Craftsy class! The previous one is not offered anymore because the accompanying Donna Karan pattern has been discontinued. I imagine the new class might include an actual Alabama Chanin pattern, or something over which they have more control.

Knitting... Arrows! Darn it, I forgot to get a progress photo last night.

Spotify also sent Your Time Capsule this morning -- the most memorable tracks from your teenage years. So far, they've NAILED IT.

Looking forward to... the weekend! I'm going to take the kids for a while on Sunday so Ali & Rod can get a few things done at home without distraction.

Needing to... Get my yarn under control. (See also Organizing...)

Organizing... My workroom. Still. Always. With a few projects finished and on their way to great destinations, I got right to it the other day, making a GIGANTIC mess! It's one of those tasks where it's going to get worse before it gets better. I made some progress and I'm excited to continue.

Nothing yet! I haven't had a chance to really concentrate on finding an audio book... don't know what I'm in the mood for right now, I guess. It's the first time I haven't had book in my ears since I signed up with Audible a year and a half ago!

Reading/Screen... Hillbilly Elegy (still) (well, sort of... I really haven't looked at it in a while). 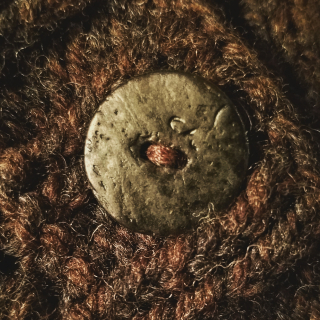 Sewing... I finished stitching the Alabama Chanin "Wisconsin fish," sent it back to its owner, and boy I sure hope she likes it! (As in, I hope I didn't go over the top!) There are still a couple of tops underway. And last night, I sewed the buttons on Maddy's Oblique cardigan!

Surprised by... Maddy's return from the Boundary Waters after one week instead of three. She sent me a text on Wednesday stating that "we quit the wilderness - so many storms and cold winds!" "Awesome trip though." I love that they didn't force it. She has a lot of leftover SPAM. Haha. 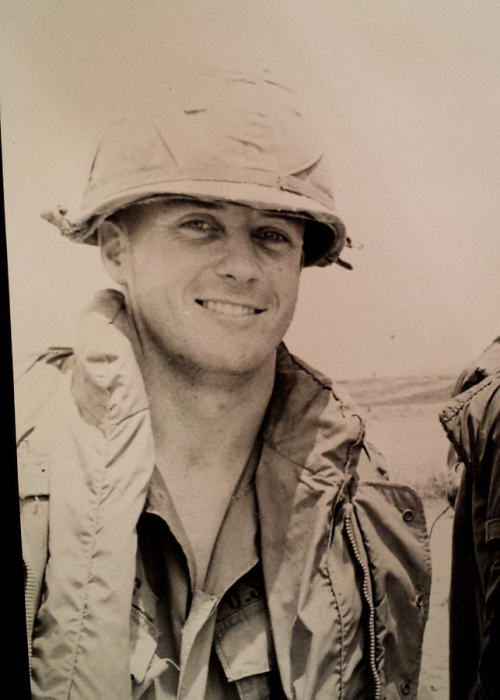 Direct from his "Vietnam and Other Tales" scrapbook, my then 22-year-old husband in Vietnam. First a company clerk, he later directed an arts and crafts program where soldiers could enjoy making models, jewelry and other art, instead of (or in addition to), ahem, other types of R&R popular at the time.

Watching... The Vietnam War. I've been recording it and, so far, we've watched only E1. I've already learned some things.

Wearing... A sweater. It's Sweater Weather!

You've got lots going on! I'm glad Maddy didn't encounter any bears; I've been thinking about her. Planning does seem to be key with meals, but unfortunately my planning skills are woefully deficient. I do hope we get to see a photo of your Wisconsin fish. I love the blingy, over-the-top closeups and will be checking MDK for a sighting. Happy Weekend!

Sounds like Maddy made a smart decision. Your trip to the UP sounds terrific! lots of good things coming up for you, too.

Oh so many good, fun things here. Glad Maddy is ok and made the smart decision to not push it. Just started reading History of Wolves and am loving it so far (only 15% into it). PAMA is excellent in champagne or prosecco too - but I'm going to try the gin and club soda & lime - that sounds wonderful. Love your playlists. Fletch has been watching Vietnam and I've seen bits and pieces of it. The music has been great (and so many memories). The UP should be fabulous in October. Enjoy!!

Whoosh...and now September is over! I'm shocked that tomorrow is the 30th. I am VERY excited to hear about your trip to Alabama (Chanin)!!! I have a t-shirt that's half stitched. SO much stitching to go (needs to be put together after that!). You have so many great things coming up in the next two months. 6 weeks is nothing (see above "where did September go?"). Good to hear Maddy decided to call the rest of her trip off. The weather sounds frightful! I need to write my own "Right Now" post just to catch up with everyone!

So. Freakin'. Excited. (About Alabama, of course. Because wasn't it OVER a year ago now that we signed up for that thing???) Tom and I just started watching The Vietnam War last night. As always, Ken Burns makes it super interesting! (And the soundtrack is fabulous.) Time is spinning out of control . . .