I watched the kiddos on Friday night while Ali & Rod went out for a bit. Usually they come to my house, but this time I went over there. 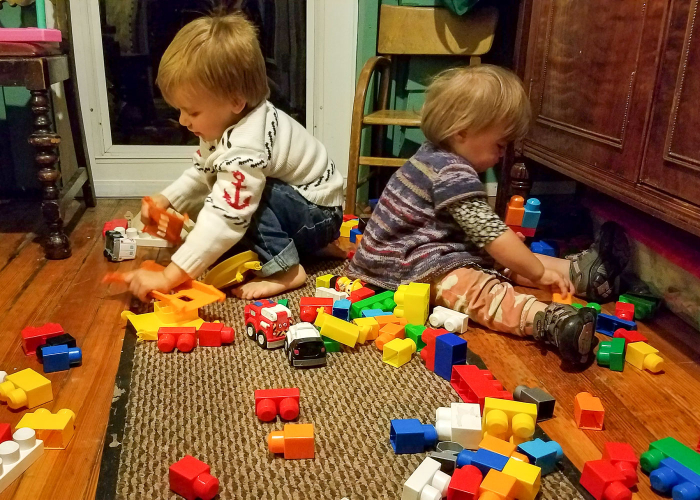 Maddy's friend Taryn has her pilot's license and keeps her plane at a small privately owned airport in the area, where she won a raffle to host a picnic/party on Saturday. Maddy was invited and I got to tag along! There was go-carting (electric, clean, quiet) -- super fun and something I haven't done in decades; a small bowling alley (I did not bowl); airplane & helicopter rides, along with food & beverages. 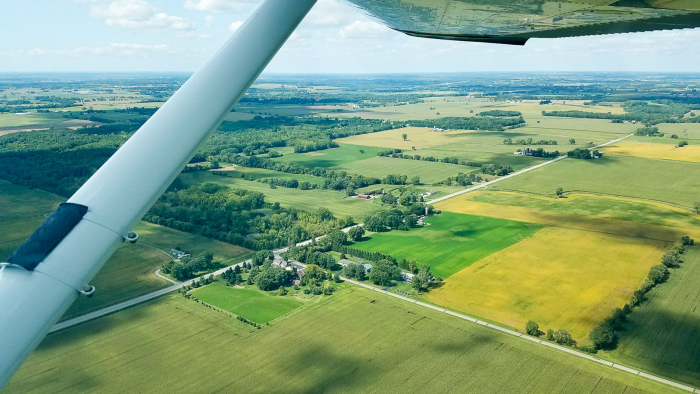 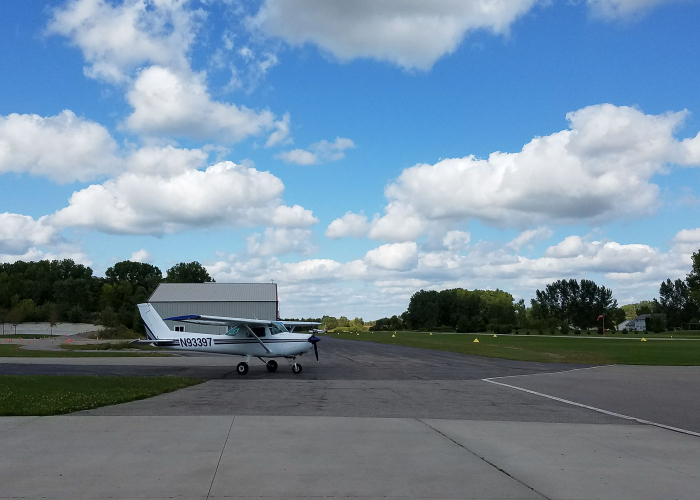 I went up with Jim in this two-seater Cessna 150. My dad had a 170, I think, when I was little; it was slightly larger -- with a back seat roomy enough for three little girls aged 4 & 3. Jim was ready to sign me up for flying lessons! I really do love to fly, but I'm not in the market for another expensive and time-consuming hobby! Haha. Sorry Jim. 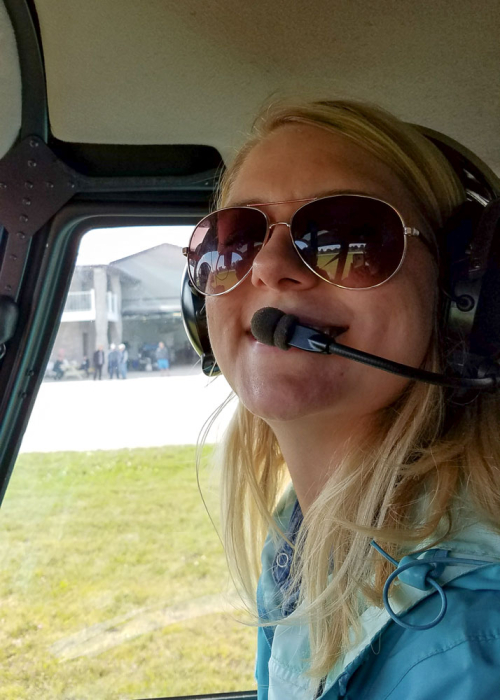 Maddy is ready for take off, complete with aviators! 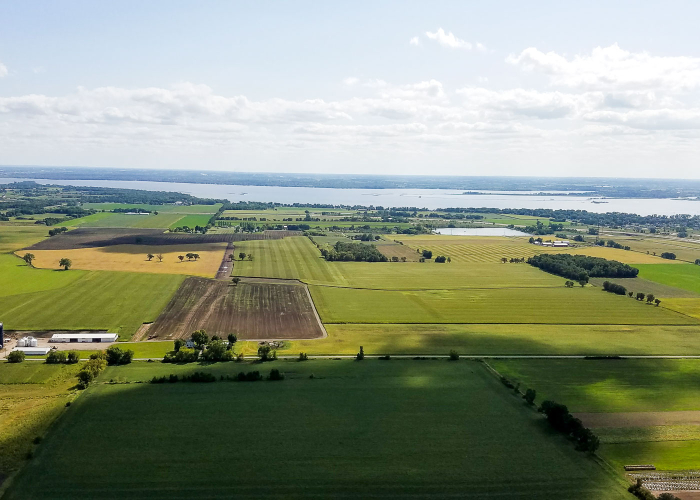 I think that was my first time in a helicopter -- the first that I remember, anyway. I sure love the shapes, colors, and textures from up there. 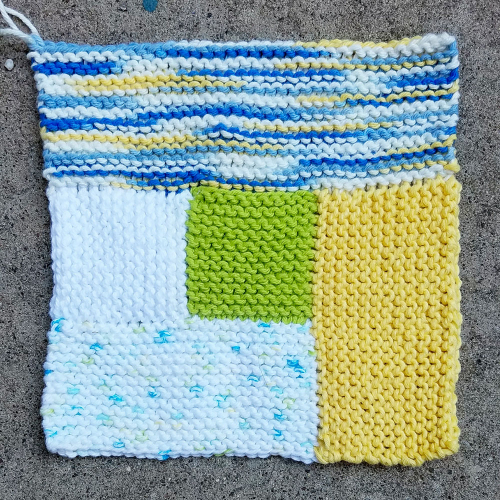 While Rusty & I caught up on a little TV Saturday night, I scratched the Log Cabin Itch™ that's been plaguing me for a couple of weeks. This is the first basic recipe in the new Mason-Dixon Field Guide No. 4: Log Cabin, though I did my own thing with the colors. I think I'm going to make it just a wee bit bigger. And knit a few more... I have so much cotton!

I putzed a bit on Sunday, cleaning up a bit... and stitching. 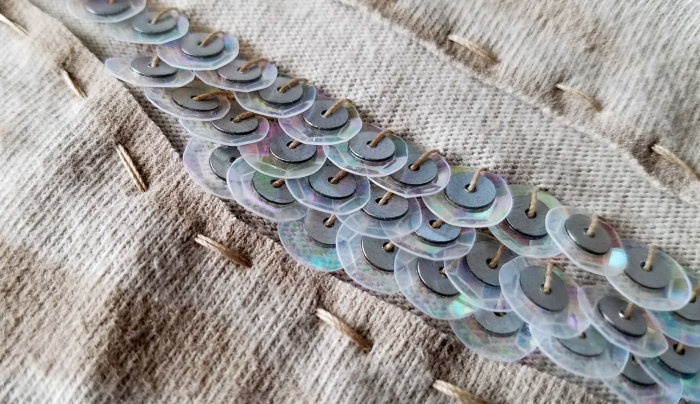 I'm working on a fish and giving it some bling... resembling scales, I hope. I've done a little work with sequins before, but nothing like this... learning new techniques from sites about "sewing for belly dancers"! Of course!!

And I did some laundry. 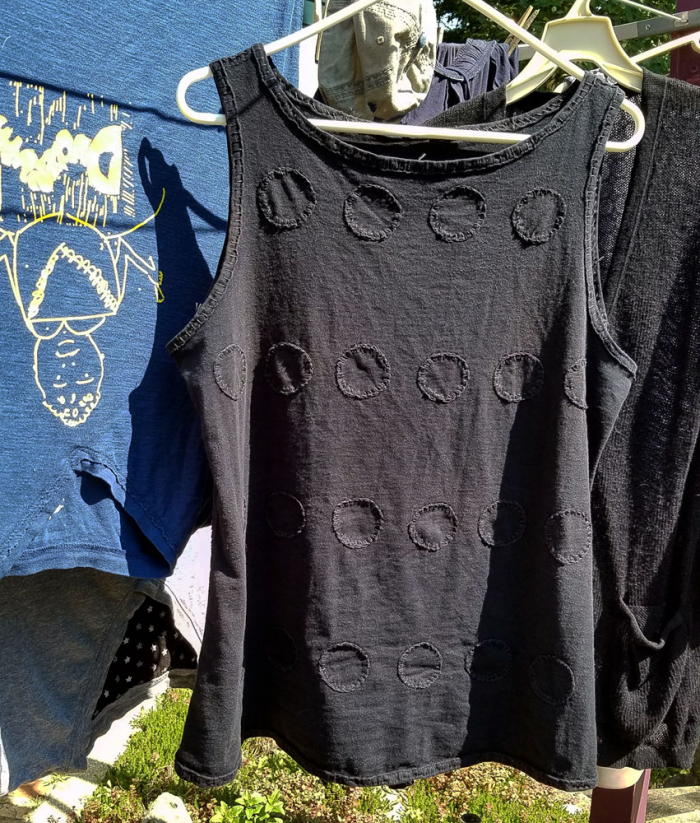 I did something -- a few things -- really dumb the other day. First, while switching an empty bottle of olive oil for a full one, I accidentally threw away the cap for the new one -- really away, as in the big bin outside. I didn't realize that I'd thrown away the wrong cap until, second, I tried lifting the new bottle of oil by the cap... that came right off, of course, and the bottle tipped and there was a big spill on the stove. I didn't even realize until a little while later that it had also splashed on me -- a big splash! I was wearing the shirt shown above, a favorite and one of the first Alabama Chanin-style garments that I made (over three years ago!). It splashed on one side, all the way from the second row of circles to the fourth, about 2.5 inches at the widest point. Third, once discovered, I took off the shirt and set it aside... so dumb! The kids were over, the kitchen was full, I was cooking... so distracted... but I just set the shirt neatly aside in the laundry room and then the oil stain on the front of the shirt proceeded to SOAK THROUGH TO THE BACK!! Gah.

Why try to remove one oil stain when you could remove TWO??

Eventually, I got back to it and discovered what had happened... soaked it good with pre-treatment spray. Washed it. Naturally, it was still there.

A few years ago, when we'd gone to Todos Santos, I leaned over the sink there and got what I thought was water on my shirt (an Eileen Fisher shirt), but turns out it was actually oil that Rusty had spilled from a can of tuna! Um, I was not happy. He did everything he could to get that stain out, and eventually called a dry cleaner and pleaded with them to share the secret to oil stain removal. They said, as last resort, brake fluid... actually, almost any other "oily" substance would work!

Anyway, this was such a big spill, I just pulled out the big gun right away... and it ALMOST worked. I'd brilliantly posted the photo on Instagram and it was looking very promising at the time. But once dry, I could still see the stain. Among the suggestions made was Dawn dishwashing liquid of different types. I happened to have some Dawn Platinum Erasing Dish Foam at the kitchen sink, so I soaked front & back really good with that and let it sit for a while. Kate was stopping over (upon her return from Denver) to have dinner and throw in a load of wash... which I knew would be black.  :)

Oh no, oil stains are biggies, especially if you don't catch them, been there-done that. I have several booklets on stain removal and sometimes no one thing works, but a zillion times at it sort of do (dawn liquid is always in those helpful remedies it seems) . Good for you for persistence.
Our weekend was quiet, worrying a bit about Florida and friends in TX but it is so nice to see the help and work done to ally those climate problems in the media and elsewhere.
I did knit some old WIP, but am wanting also to buy MDK #4 booklet, all that yarn in my stash should definitely go towards a log cabin blanket.

glad the dawn helped/worked - as an aside I also use it for Dog Shampoo - the Vet recommended it and Sammy-Sam (my Boston Terrier) gets a tubby/shower with it - works like a dream and he is pretty sensitive skinned. - - Sharon

Your airport picnic/party looks like so much fun! John took flying lessons for a couple of years until we realized that it wasn't really a fun hobby, it was a very expensive lifestyle and really well beyond our means. But we always go to the local airport for fly ins and take a wonderful plane or glider ride. I'm glad you got your AC tunic de-oiled, and I'm very interested in your blingy fish. "Sewing for belly dancers" has made my day!

You had me in suspense with that oil stain story! So glad it had a happy ending!

So glad you rescued your garment.

I always use Dawn/dish soap on food stains. I usually dab it on the spots immediately and then throw it into the regular wash when ever.

Also good for oily stains: pre-treating with Liquid Organic Cleaner by Amway. I'm not a distributor.
It will continue to remove the stain over multiple washings until it is gone even it the garment has been through the dryer.

I've learned the hard way not to wear favorite clothes when cooking, but with your new trick I won't be left with shirts I can't wear. Thank you for that tip. You are much braver than I as flying in small planes and helicopters scare the heck out of me. Actually, I'm too afraid to even try! Your photos from the air sure looked fabulous!

I seem to remember my Nana using Lestoil for oily stains - although I am not sure it is even sold anymore. I have also found a bar of Dial soap does the trick. I am glad your stain story had a happy ending!

1. My friend and I took a helicopter ride over the Badlands back in the day. Fun!
b. Those MD log cabin dishcloths look like a fabulous way to use up Sugar/Peaches & Cream leftovers.
iii. The sewing-for-belly-dancers site made me LOL!
D. I had never heard of the brake fluid solution, but it is always good to have another secret in one's bag of [laundry] tricks!

Another great way to remove oil stains is good old white chalk. I had bacon grease that splattered all over a shirt I was wearing and thought it was ruined. Just rub the white chalk over the grease spots and let sit. Then wash and hang dry. Usually comes out the first wash!

Although I usually use Dawn dishwashing liquid, I've also made a "slurry-paste" (I'm married to a chemist; I know an entire new language of terms describing the physical properties of liquid-to-semi-liquid states. . . ) of granular Tide detergent. If you rub that in really well . . . and let it sit for a couple of days . . . it works, too. (It also works to remove heavy coatings of Vaseline from hair.) (Don't ask.) XO