As this goes live, I'm winging my way to meet Kym in Nashville! We will hop into a rented car and drive to Florence, Alabama, for a long-anticipated 3-Day Workshop at Alabama Chanin! We've been planning this trip for well over a year, and... SO EXCITED!

I've been on my Alabama Chanin journey for a while now, and thought today would be a good time to share the story of one of my recent (unusual and crazy-fun) projects:

Kay Gardiner, aka Mason-Dixon Kay, began working on her "newest oldest" sewing project, the Alabama Chanin Flag Quilt, on July 4th. It's a spectacular piece! It's also a bit overwhelming, even as a pre-cut and pre-stenciled kit.

After a week of immersion sewing, Kay was considering ideas to infuse her quilt with some personal style... by changing some of the thread & fabric colors, by adding embellishments, and by somehow involving friends.

I've "known" Kay for about as long as we've all been blogging. We met in person at Rhinebeck 2006, I think, and then again 10 years later. In between, we've chatted a little bit via Instagram & blog comments about knitting, of course, also about other projects & the kids & family & events, and quite a bit about Alabama Chanin projects these past few years. I was delighted when she asked if I'd be game to stitch a block of her quilt. 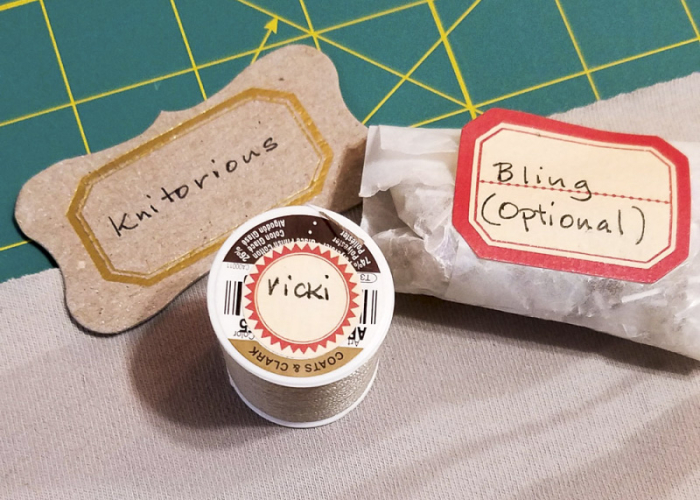 She sent her "Wisconsin Fish," along with a spool of thread, and a small bag of iridescent semi-dimensional sequins marked "bling (optional)" -- which, HELLO, were never considered "optional" for even a second.

I immediately pulled out my own collection of sparkles to see how it all might work together -- adding a variety of seed beads, bugle beads, and more sequins to the mix! 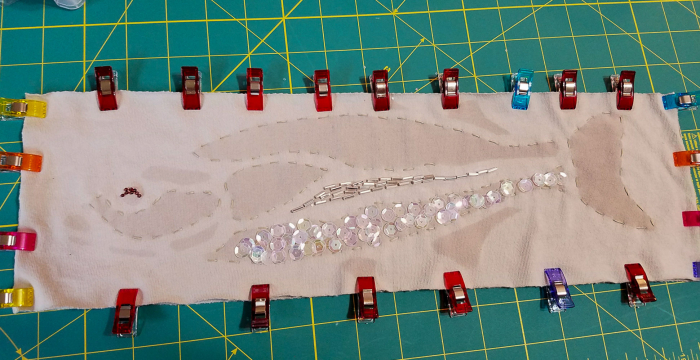 Everything was kept quite secure with Wonder Clips, of course! 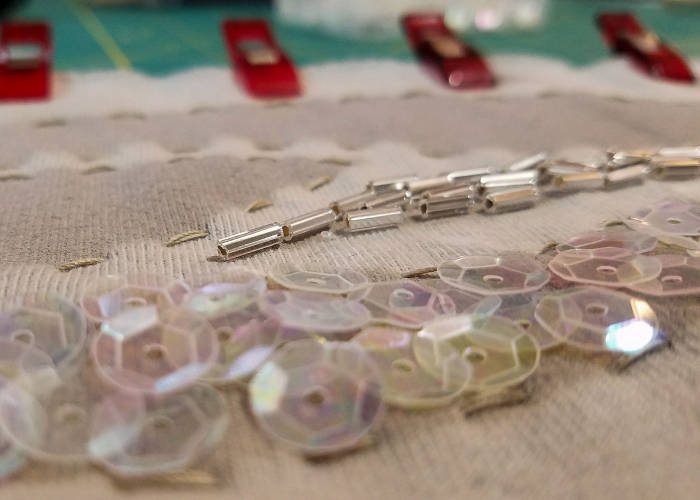 THE PLAN FOR BUGLE BEADS WAS IMMEDIATELY CLEAR.

Eventually I did a little sewing. And some cutting... periodically laying out beads & sequins to see if I still liked them this way, that way, or another way. 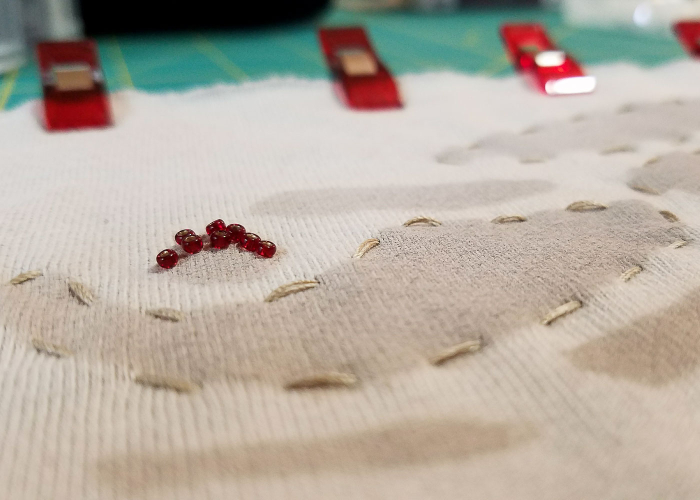 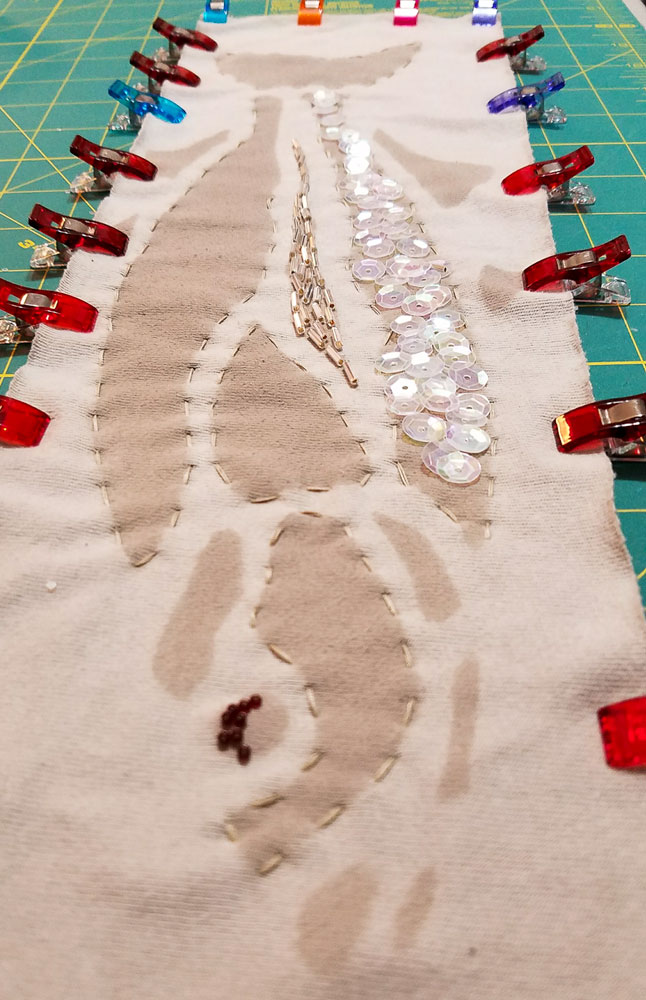 My daughter Kate was starting her new job at the time, but frequently stopping home, and every time I'd call out, "Come and see my fish!" I'd show her what I'd done and run through ideas... 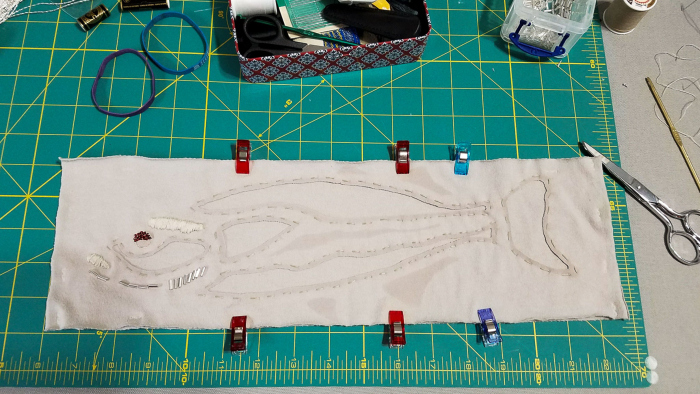 I started off with mostly reverse applique, running stitch, knots on the back; with some beading and a little bit of satin stitch with embroidery floss. (FYI: satin stitch is harder than it looks!) 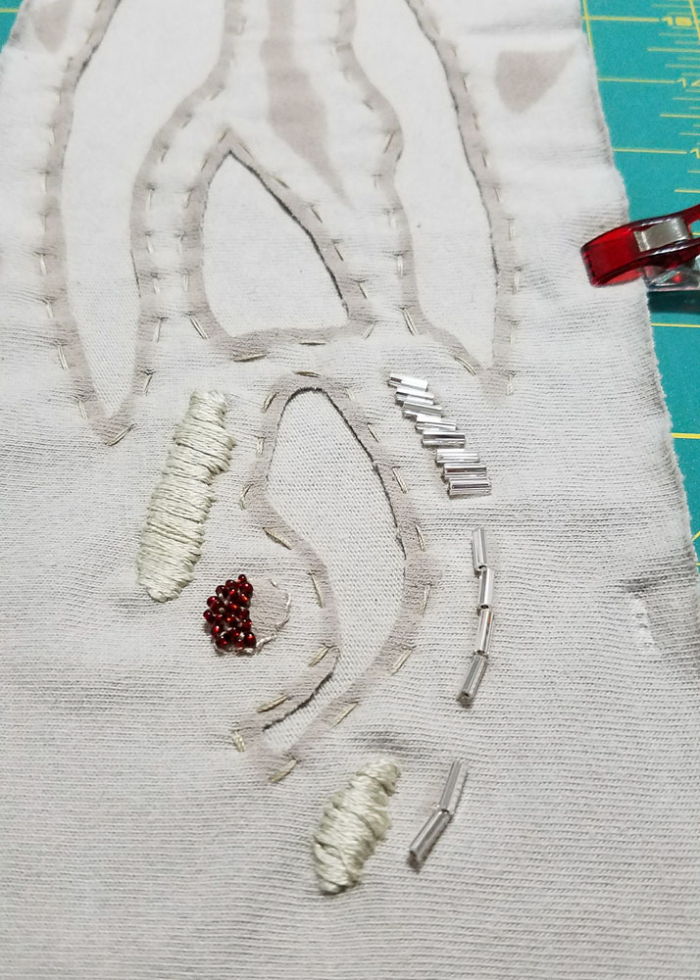 The sequins, though! It was obvious to me that they needed to be fish scales... but how? My only experience with sequins was on my Catamount Tunic, and the inspiration for that project made it pretty simple & straightforward.

Obviously, I needed to expand my sequins knowledge, and my treasure trove of sequins inspo for this project turned out to be "sewing for belly dancers." 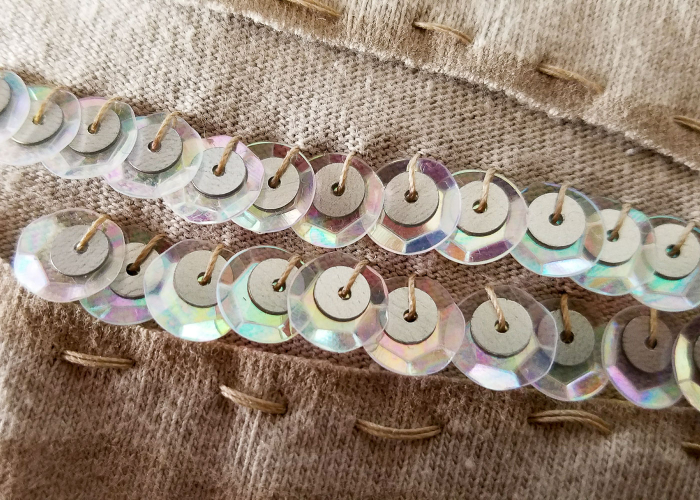 I used a combo of sequins and sewed them on in rows to make scales. 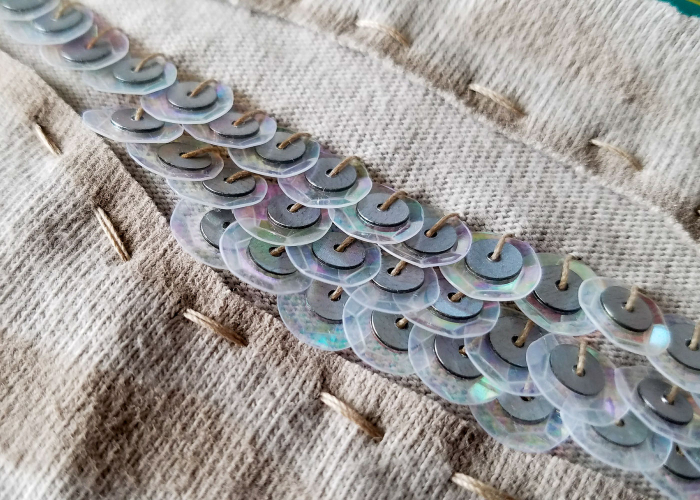 Initially, the rows were too far apart, so I filled in, and continued in a more dense pattern. I'm sure that looks tedious to some, but I really had fun doing it! Perhaps, as Kay says, we "have a skewed sense of what is fun..." 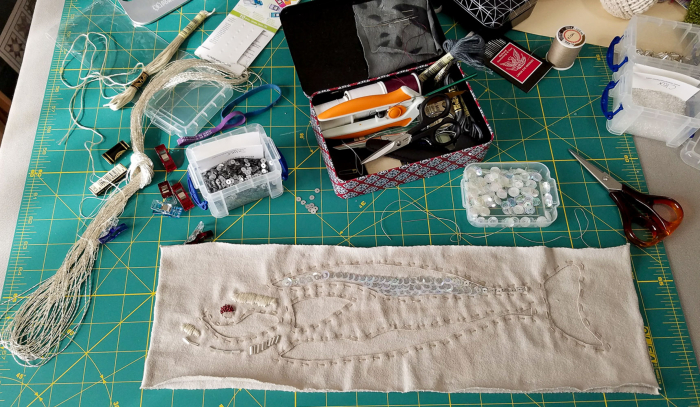 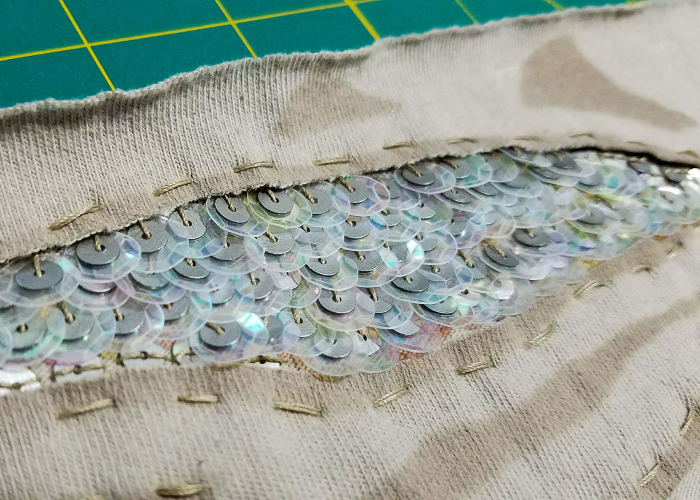 It was fun to figure out the little details as I went along... filling in bare "scale" spots with plain sequins; using red beads for the eye, outlining it with some metallic thread. I love the dimension and bit of sparkle and shine. 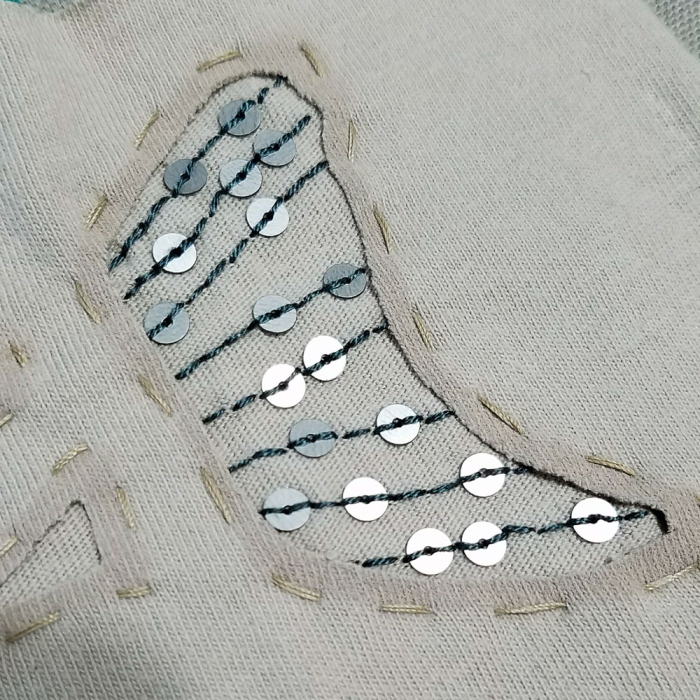 I wanted some "lines" for the fish tail, so pulled out some more embroidery floss and sewed in some random sequins. 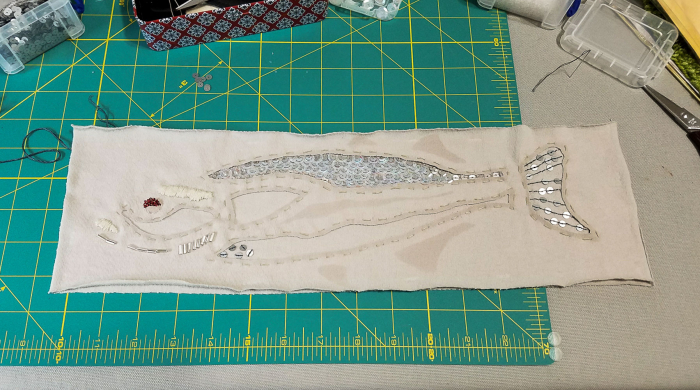 I used only sequins -- fairly sparse -- for the belly (just beginning, above). 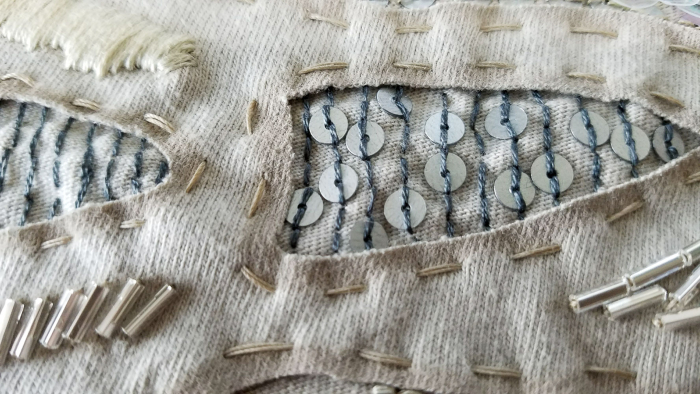 I stitched "lines," too, for some of the other fins -- with and without sequins. 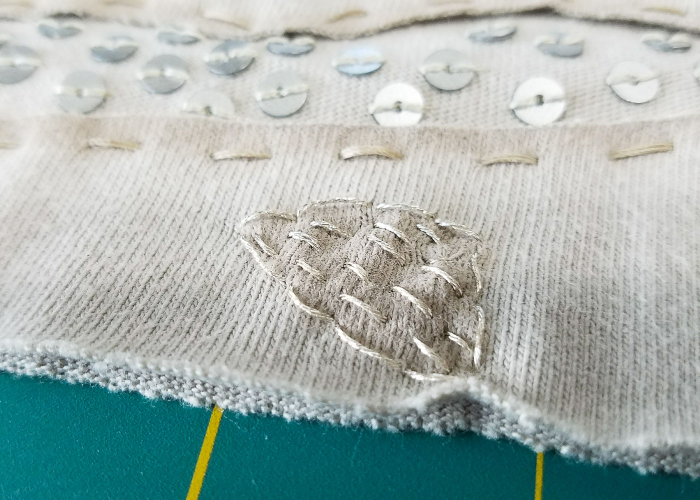 ... but holy cow, each of those things separately -- satin stitch & working with metallic thread -- is challenging enough! Instead, I used the metallic thread to back-stitch the outlines of the fins and sparsely fill in with running stitch. 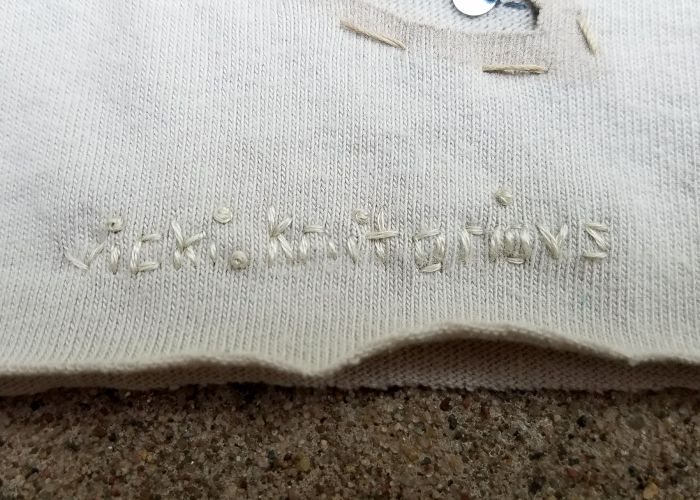 Finally, I signed my work.

Then I had to photograph it and send it back to Kay! Catch & Release... The One That Got Away... Some Fish... the Wisconsin Blingfish!!

I can't wait to see the whole quilt come together!!

An AC garment seems a bit daunting to me, but with your wonderful Wisconsin Blingfifish as inspiration I'm wondering if I could stitch a small block (fish or otherwise). Love your sewing for bellydancers on fish!

Oh, Vicki! I was in awe when I saw this (via Kay’s IG) earlier this fall. But to see the detail up close like this is amazing! WOW!!! I love it so much!!!

Wow this is outstanding!! Love those top scales and all the lines give such a feeling of movement. really creative.

Oh my, it looks like a very rich fish with all that sparkly bling. Good enough to hang on my wall, how I wish. Such a sewing project to undertake - you are hiding some hidden talents there, Vicki!!

VICKI IT IS INCREDIBLE.

There are at least 2 other fish blocks in the quilt and they are going to feel like the Poor Relatives compared to the mighty Wisconsin Blingfish.

Your work is spectacular. Thank you for being so game. This really inspires me to keep at it, sewing on my quilt. Today I'm sewing on it with Natalie, who is in town for her book launch, but will be back to Alabama before you leave.

HAVE SO MUCH FUN IN FLORENCE.

Those Wisconsin Blingfish... wow. This should become a thing! A thing on everything! And, you and Kym have SO MUCH FUN! XO

Your stitching brought that fish to life! You knew just what that fish needed to realize its full potential. YES, our warped sense of fun is what keeps that creative spark alive and kicking. I'm thinking of you and Kym and know you have the most incredible time EVER!!! xox

My breath, it is taken away! Wow! Have an amazing time at Alabama Chanin!

Your fish is inspirational. Thanks for sharing your process when creating it. Have fun at Alabama Chanin workshop, I'm looking forward to see and reading about it.

Oh, Vicki! That is amazing! And gorgeous! What an incredible amount of work, I am so so impressed. P.S. Have a BLAST with Kym!

When I saw this show up in Kay's Instagram feed I was awed, amazed and pleased to "know" you myself :-) Imagination executed with style! (now I can't wait to see it with all the other pieces ... do you have an ETA?)

Brilliant! Literally.
Have a blast with Kym in Florence . What a very excellent adventure.

I know I'm late, but I was saving this post until I could view it on my big monitor. It. Did. Not. Disappoint! Such fun to watch your creative process on this piece. And how great to get to be a part of something bigger with a friend. Hope you're loving your time with AC.