As mentioned yesterday, I did a little cleaning & organizing. I identified two specific areas in desperate need of attention. 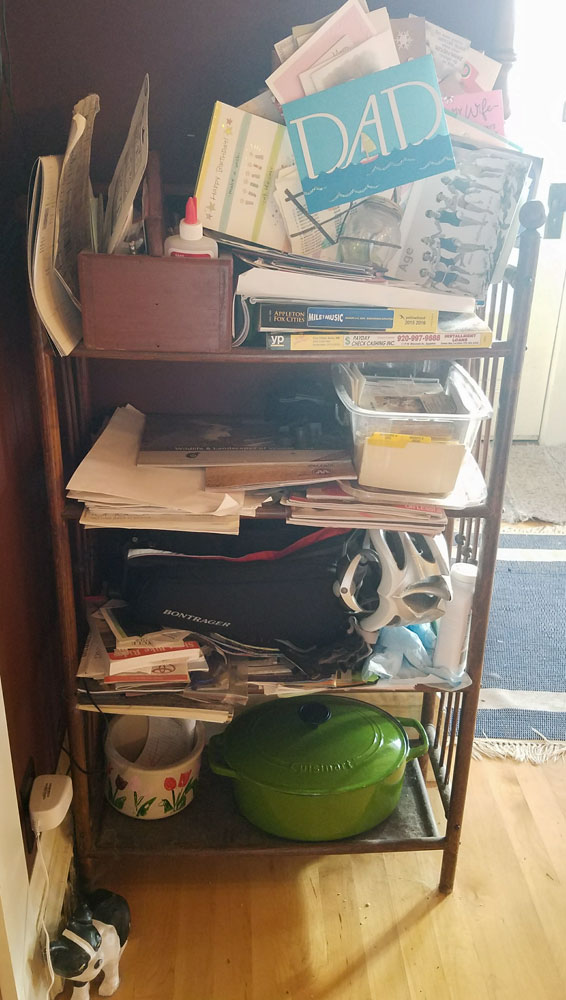 This is a lovely old but rickety bamboo shelf unit in a corner of the kitchen that used to see a bit more action because it's where the phone is located. You can see a couple of phone books; they've never been cracked, so they're now in Recycling. There's also a personalized Phone List, which I had on the computer and used to updated on the regular, but it's been YEARS, so also recycled. Pens, pencils, paper, calendars, recipes, a few (ahem) greeting cards, cycling stuff. 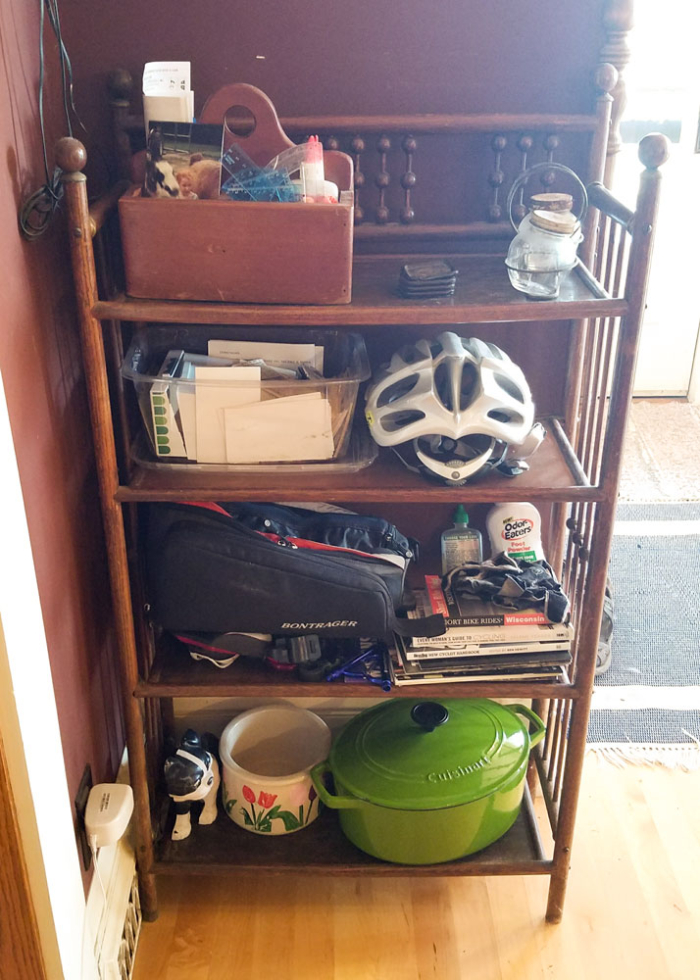 It's not perfect, but it's better. I added a LOT to the recycling bin yesterday. The phone is still "located" here, but it's unplugged more often than not. The only reason it's still on the wall is because it would leave a mark if removed, and I'm not prepared to deal with that right now. Because of "bundling," it's cheaper to have the phone than not... it's probably even cheaper if I added cable TV back in... but all I really want is internet. The phone drives me nuts, even with Nomorobo activated, and it makes me feel ill when I think about surfing through all those cable channels that I don't care about; it's been 6 or 7 years since I cut that cord, and I don't miss it a bit. 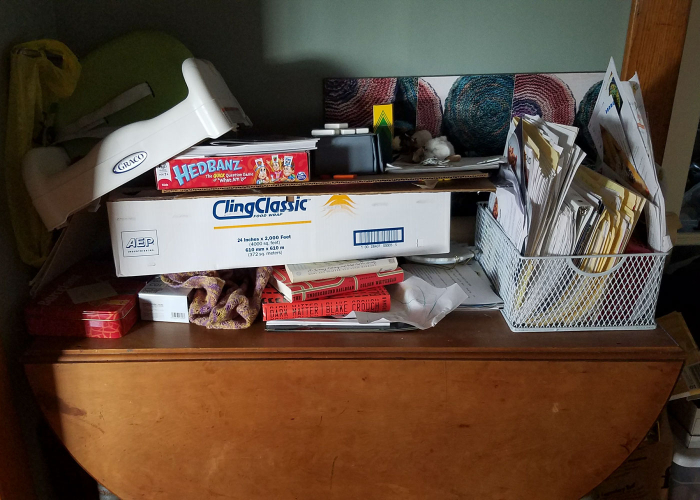 This is an old drop-leaf table that Rusty had when we got married. It's located just kitty-corner from the shelf above. It usually starts out with some sort of display, but quickly becomes a catch-all! 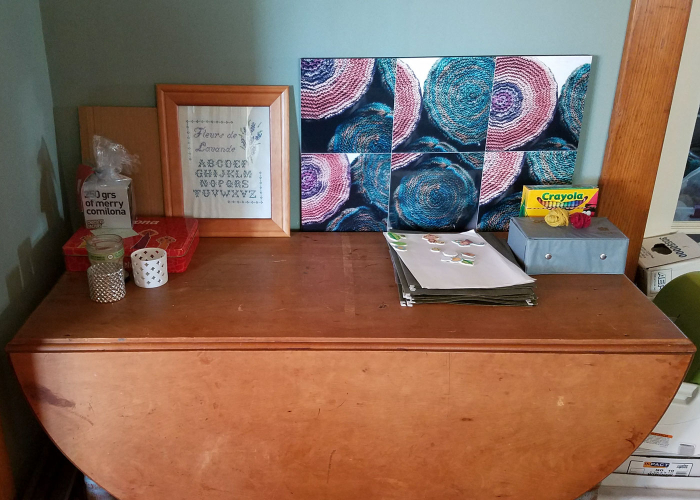 I even found some Christmas stuff (from the contingent in Spain) from last year! 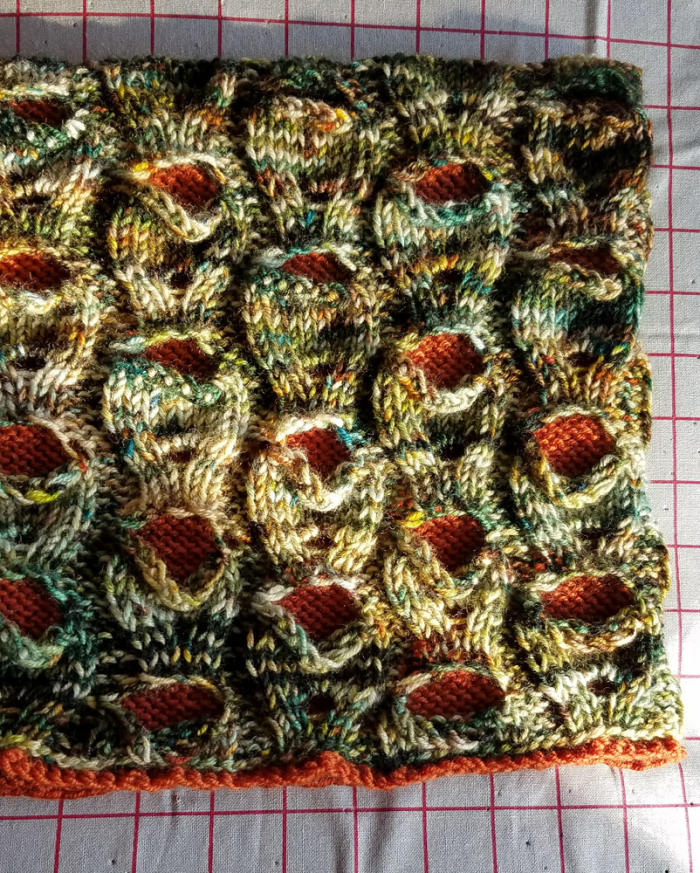 I finished seaming my Abulón cowl at Knit Night on Thursday, and gave it a soak yesterday. It was on our bed to dry, but it's going to take a while, so moved it to the upstairs bedroom. Maybe a Unraveled Wednesday debut??

How was your weekend?

Why is it . . . that certain spots in the house (and mostly in the kitchen) become such clutter-magnets??? I'd really love to solve that riddle. Instead, I'll just keep de-cluttering my little built-in kitchen desk. Again and again and again and again. . .
(That cowl is AWESOME.)
XO

It feels great to get spots like that cleaned up! The shelves in our den were a mess (well, Dale's side of the shelves, mine look fine) but I can't organize/recycle his stuff so I put it all in a big basket for him to deal with. This morning when I meditated in there it looked SO much better. Now I just have to get him to deal with the basket. Love that cowl pattern so much!

The before and afters look great! I still have my phone on the wall in the kitchen even though we got rid of the landline, for the same reason. Someday I'll think of a good way to deal with the mark when I take it down (or maybe just hide it with a small piece of art)? Your cowl is gorgeous and can't wait to see it up close and personal!

Wow, looks great. You inspired me to recycle the phone book too. I'd like to cut cable but then could I watch PBS? And what about The Crown? That's the type of programming I'd miss.

Ah clutter...it's EVERYWHERE!! I did get rid of some this weekend, but more purging is needed for sure. That is one gorgeous cowl!

Ah, clutter. What's that famous saying? One woman's clutter is another man's "important stuff". We have a desk that used to look like a paper factory exploded on it. Going to electronic bill pay has *almost* eliminated that.

The sign of a true blogger: being sure to get the "before" photo to share :-) Clutter just has a way of sneaking up, doesn't it. I have several counters in the kitchen that just seem to attract it. Looking forward to tomorrow's cowl reveal!

You did a great job of cleaning and clearing the shelves. Both spots look good for now. The space closest to the back door is our 'dead zone' of stuff. Whatever is in the hands, anything that has no place else, or might be needed later is stacked there. It drives me crazy and Smith cares not. The phone. We just can't seem to pull the plug. The cowl is even more fun than I thought it would be. Love the pop of orange!

You are VERY impressive! Nice job Vicki and it feels so good doesn't it?! Congratulations on that absolutely beautiful cowl too.

The perpetual decluttering... sigh. It needs to be done here too! And that cowl is beautiful!