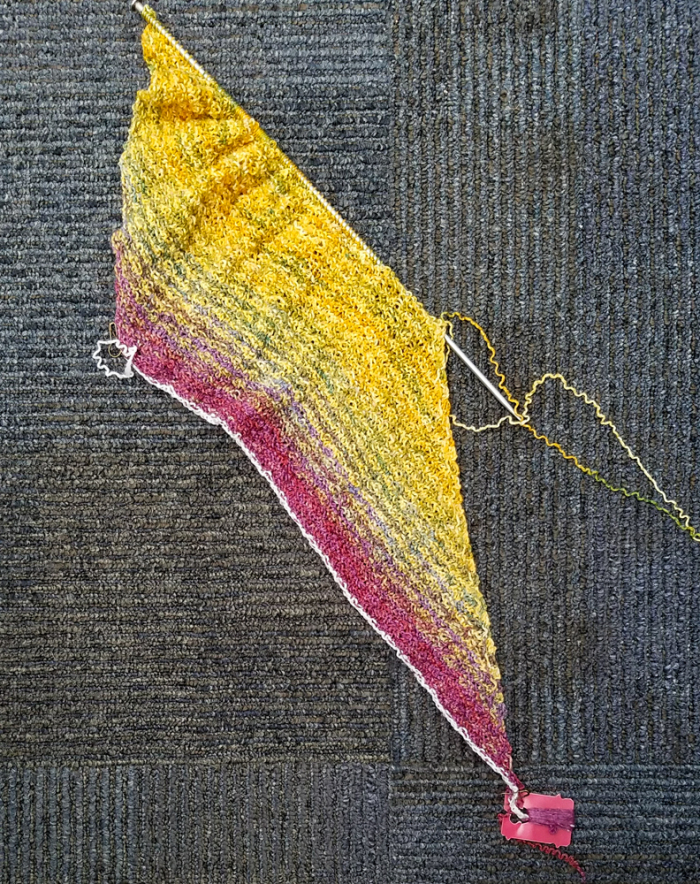 My Parallelogram Scarf has grown a bit since yesterday (so much brighter!), due to...

...evening attendance at our friend Pat's 2018 Film Festival! Looking for a way to get through the doldrums of winter and inspired by her sister-in-law's massive movie collection, this is Pat's 5th festival. Usually on Wednesdays, and with a total of around 40 altogether, four or five films are shown each festival day beginning at noon, with :15 breaks between. There is a theme each year -- 2014-John Cusack as lead actor, 2015-Edith Head as costume designer, 2016-Food, 2017-Classic Novels made into Movies -- and this year, it's Steamy, Hot, Summer - Heated Up! There's a healthy mix of genres and nationalities, and festival-goers come and go as they may. It's all about Pat, really; she's just generous enough to send out invitations to her friends.

Wednesday is normally my day off, so you'd think this would be easy, but no... I've hardly been able to attend at all (also, they lived about 20 miles away in 2014-15). And I worked yesterday... however, the last movie on the program, Salmon Fishing In The Yemen, has long been on my list and wasn't due to start until 5:55pm! Rusty and I arrived just as the previous movie ended, with enough time for a bit of socializing over a bowl of soup before showtime. It was wonderful (the company, the soup, and the movie)! 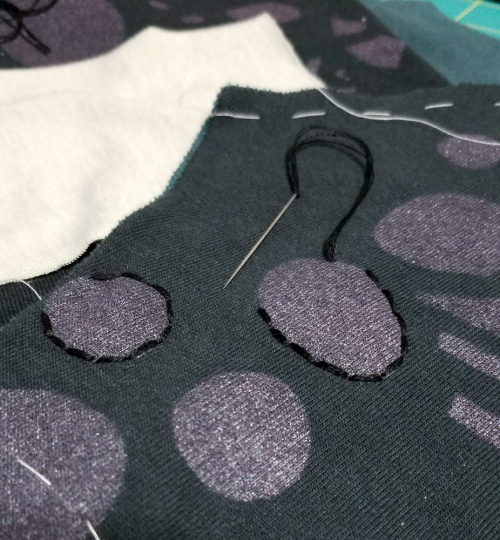 I had a free :15 yesterday, so began my DAILY STITCHING, inspired by Margene (also as mentioned yesterday). It's a new thing (for me), and I'm not going to get too crazed about it, but I got myself situated and it felt so good to get started, finally, on my Alabama Chanin Car Jacket!

Good things, each one! But the stitching!! I LOVE IT!

I'm going to begin the same . . . daily stitching (or I'll never get that damn dress finished)! And Pat's film festival sounds WONDERFUL. What fun!!! Where does she host such a thing??? I love it.

I like the new brightness on your Parallelogram and that cool film festival, but I LOVE your daily stitching! Fifteen minutes may not sound like a lot of time, but the journey of an Alabama Chanin Car Jacket begins with a single stitch!

That shawl is pretty and your jacket stitching looks so fun.

A film festival at a friends house sounds lovely! You Parallelogram (which needs a knick-name) is so vibrant and reminds me that spring is coming! Even one bead a day will be enough to fulfill our dreams of daily stitching. I kind of like the flying by the seat of my pants nature of this journey!

Oh Gosh! I had forgotten that you are making the car jacket. The is going to be so, so fabulous! 15 minutes a day will get you there (without going crazy). Loving the colors in your parallelogram too - so Spring-like and vibrant. Your friend's film festival sounds like a ton of fun (and I'm not even that much of a movie person - lol) - love the idea of different themes each year.

Can't believe I can say this, but I've seen Salmon Fishing (and enjoyed it very much) - what a fun idea for a movie festival! ... and today's ad cracks me up "Best Older Women Haircuts" ... hummmm... wonder if I should check it out? ;-)

I think thing 1 and thing 3 are looking good. The colors on thing 1 are really nice. And that film festival! What a fabulous idea!