Nashville!
Weekending: At the movies

I teased a few times in the past couple of weeks about an epic, years-long, multi-generational sewing project that I was working on.

As memory serves, it started out with a vintage chenille bedspread and my mother's desire to have it made into a bathrobe. I'm sure Mum purchased the pattern, but she tapped Ann to lay and cut out the pieces. Pieces cut, Ann got busy (work & babies) and the whole shebang got stuffed into a bag where it sat for a while (years) until ~flash forward~ Ann moved to Brazil and gave the project (and her serger) to Ali to finish! Ali got busy (work & babies) and also needed to clear stuff out, so it came to roost with me.

That (beat up) bag has been kicking around at my house for at least four years.

The upcoming trip to meet Ann in Nashville, her birthday on 1/23 and Mom's on 1/31, all came into play when my eyes rested on that bag one day last month and, without hesitation, I pulled it out and started to sew. 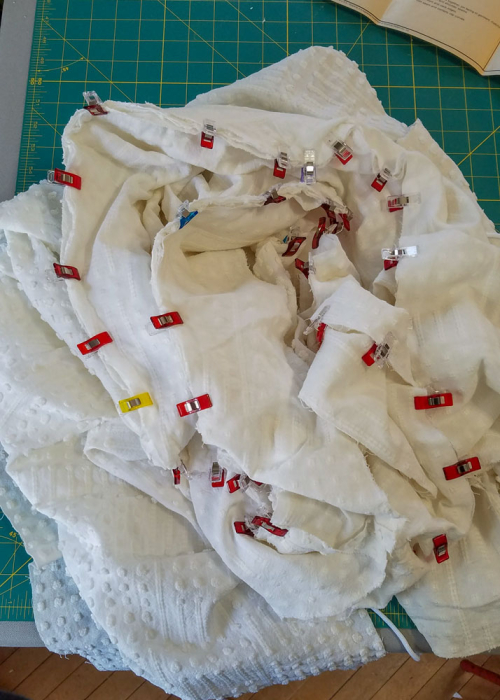 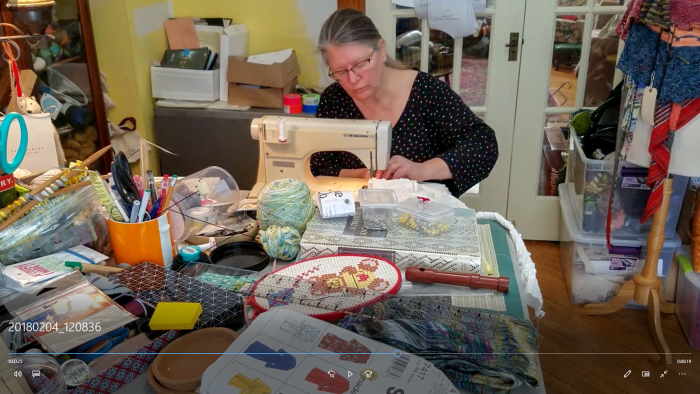 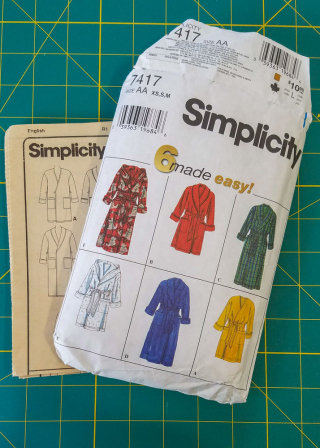 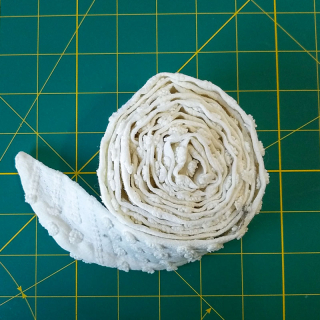 Lo, the pieces were all there, along with a little bit of extra fabric, the pattern & instructions, and everything was in pretty good shape. (I pressed each of the tissue pieces as I worked, neatly folding them up to fit the envelope, because this turned out to be a really nice robe and I would consider making another!)

I finished in time and surprised Ann in Nashville with her/Mom's birthday present robe. 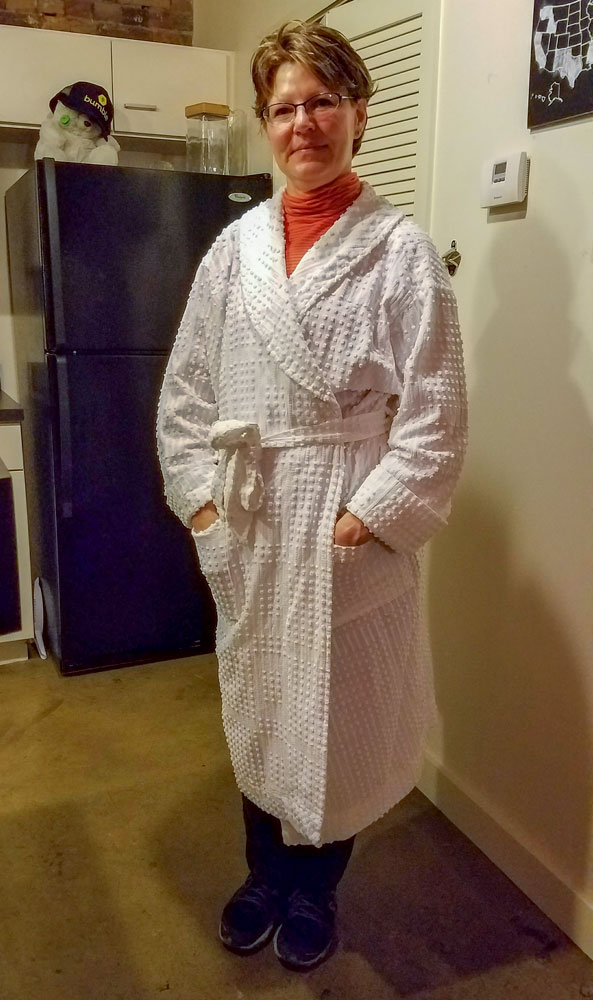 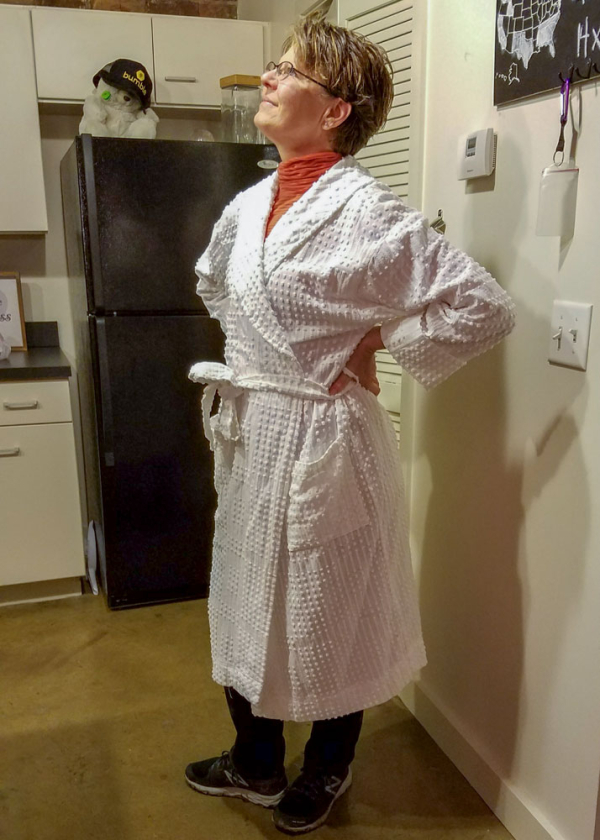 She loved it! (The photos aren't the greatest, as she's fully clothed underneath and it was late/we were packing.) (Also, sneak peek above into my VERY messy workroom -- so much going on in that photo, it makes me laugh.)

I'd been knitting on Morvarch until I returned from Nashville, when I decided to listen to the voice in my head and stop! It was going 99% OK -- getting used to the yarn and working cables again -- and I really liked it, but there's one little place where it's wonky. Also, there's no way it would be even close to finish by closing ceremonies, so it didn't make sense to continue just for the Olympcis. The problem is easily solved with a slight change in my technique, so I'm just going to start over and do it correctly from the beginning.

So, I've changed events and pulled out another long-languishing project for the WIP Dancing event: Habu For Me! 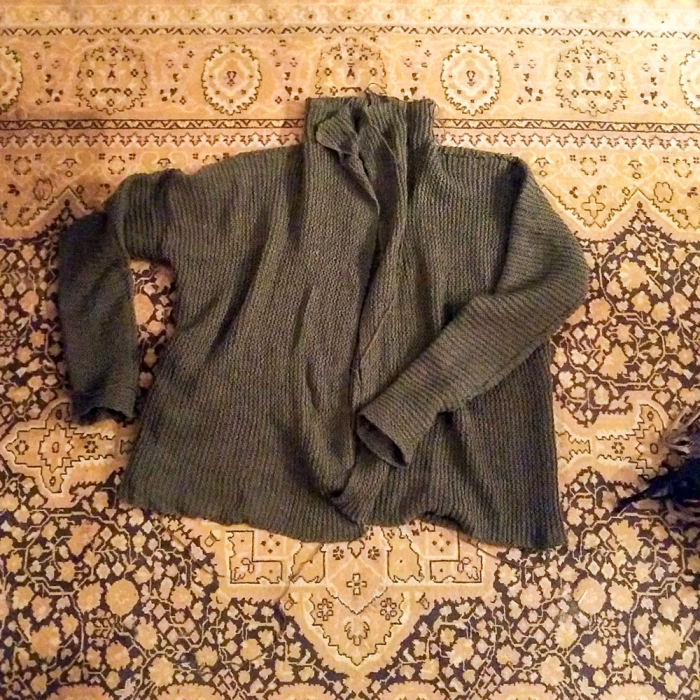 This was on the top of my To-Do Pile for the 2010 Olympics and didn't make the finish line. For 2018, the pieces were all knit (in the correct size/gauge) and all that remained was seaming & buttons. 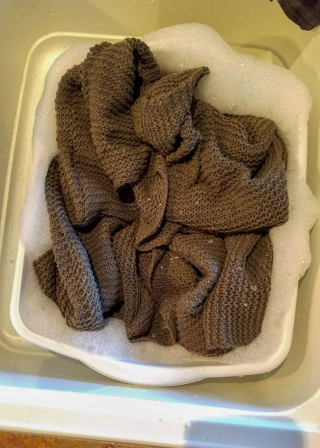 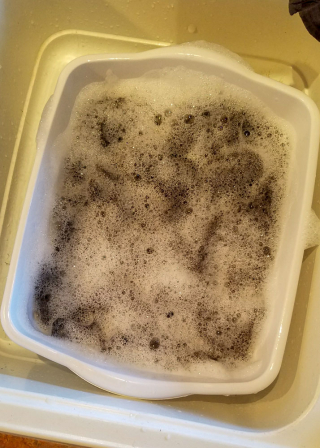 It was all seamed up by Tuesday night and I gave it a soak yesterday. 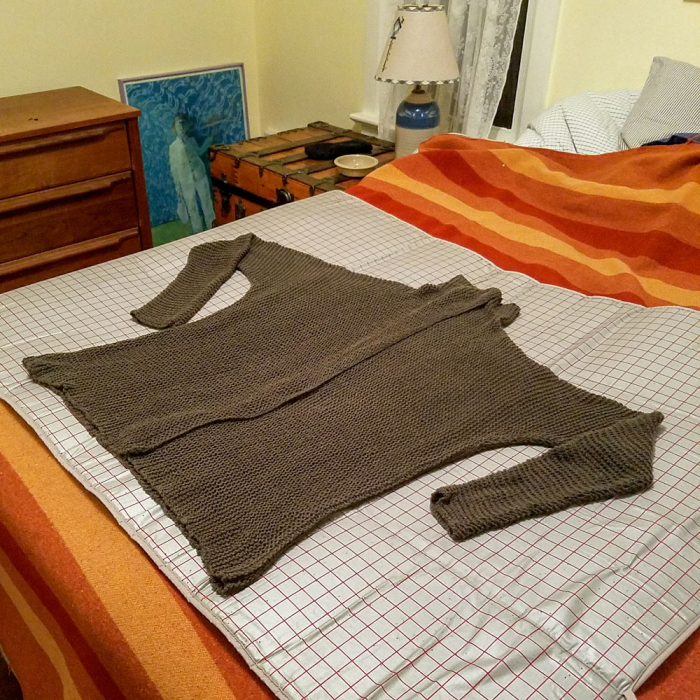 I'm sure it'll be dry this evening! I still have the buttons that I purchased when I bought the kit at my LYS during a Habu trunk show -- in November 2007!

Rusty & I were ships passing in the night last Tuesday; he was returning from a week in Mexico as I was departing for a few days in Nashville. 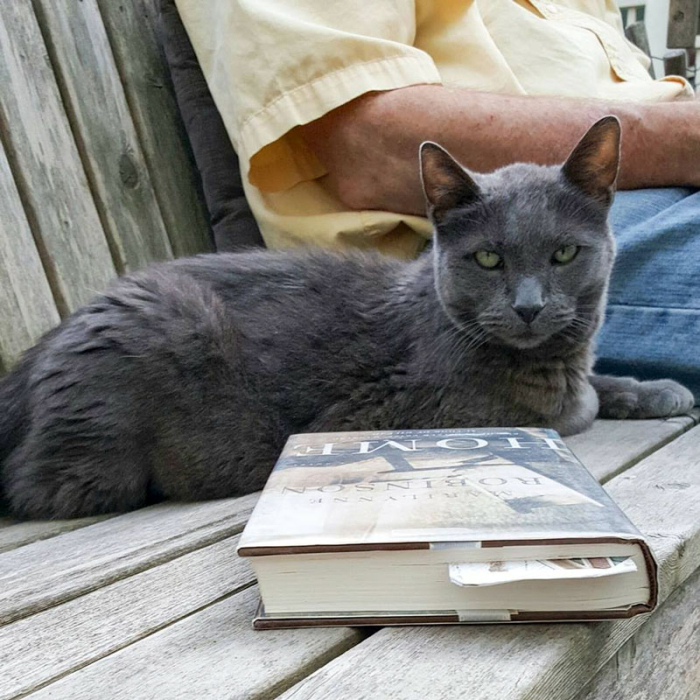 When we spoke on Wednesday, he told me that he was worried about our old boy, Mr. Scamp Washcloth. Scamp wasn't eating and, actually, seemed unable to move his hind legs. We've noted a decline over the past few years -- he seemed stiff at times and we joked a bit about "kitty Alzheimer's" -- but he was still able to jump into an open lap, scuffle around with Duncan a few times a day, and even bat a milk ring or whatever around on the floor. He'd been doing all those things just days before! Heartbreaking to see that suffering... Rusty took him to the vet and he & Kate were both with him as he made his way over the rainbow bridge. We said good bye to his sister Roxie not long ago, and now Scampy joins her -- and Daisy, Cutie, Cleo, and Porter! 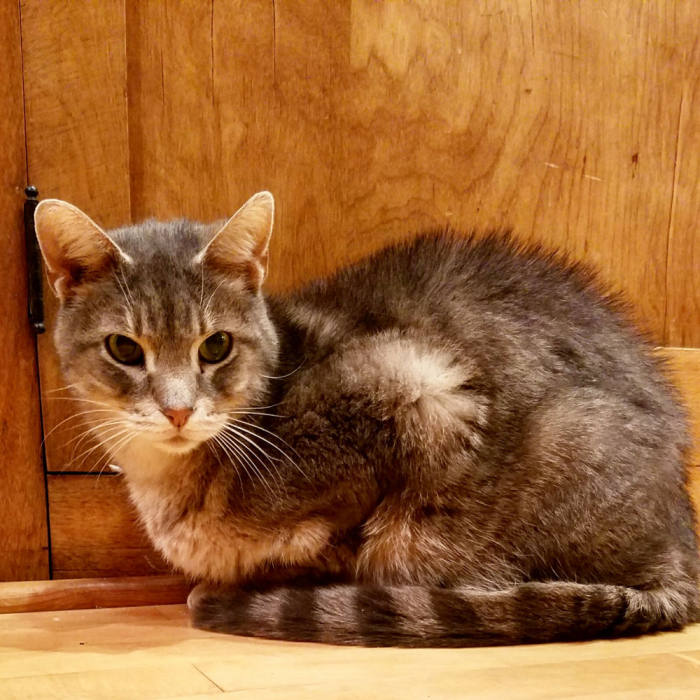 That leaves this guy, Duncan, an "only cat" for the first time in his 10+/- years! It's been a week and he seems to be adjusting... sort of. Poor guy, he's getting lots of extra attention and lovin'.

Oooooooo - so LOVE the bathrobe. Fabulous project and it looks so great on Ann. Congratulations on a fun finish.

And a sweater after a decade? Congratulations on that as well (and I love the pattern and color).

Poor Scamp. It's hard to see our animals suffer. Our cat, Tyg, still misses the neighbor's cat who went over the Rainbow Bridge sometime in early December. Give Duncan a little scratch from me!

I'm so sorry to hear about Scamp. I hope Duncan adapts quickly to "only cat" status. XOXO (It is the Year of the Dog now. Just sayin.)

I LOVE the bathrobe!!! What history!!! (I was convinced it was some sort of curtains. . . ) That looks like a winner of a pattern. (Wonder if it's still around?) And I think your sweater looks fabulous.

XO
PS -- My sewing room looks MUCH like yours. Always WAY too much going on there. (And -ahem -usually not sewing.)

I love the bathrobe and sweater and their great back stories! There is that saying about "a messy desk is a sign of genius", and I'm fairly sure that also applies to sewing workrooms. It's not mess; it's just visible inspiration and creativity! :-)

Each of your three 'things' are so special.
Thank you for sharing the happy, the satisfied and the sad,
just like life. ((hugs))

Congratulations on two wonderful finishes! I'm thinking I should pull my sewing machine out and leave it on my desk (er "sewing table"?) ... cultivating a little (or a lot of) mess might be good for my creativity!

Scamp certainly had a good life with y'all and I'm sure he's happy with his siblings over that rainbow bridge. Hope the people in the house are adjusting as well as Duncan... xo.

I love the life in this post - all aspects of it. Some good, some messy (yay, I will have to show my work room in all its messy glory!), some persistent, and some sad. All woven together to make up the stuff of life. Beautifully shared!

I so enjoy your catch up posts that run the gamut of life. The robe is fabulous with its history, beautiful fabric and, even better, how the recipient will love wearing it! Everyone has or has had a workroom full of projects amidst piles of fun. (A creative mind at its happiest and fullest.) So sorry about Scamp. Please give Duncan a few scritches from me!

So sorry to hear about Scamp! It’s so hard to know when to let go. Loved seeing your finished projects, and it’s nice to know that I am not the only one with languishing projects stuffed in bags! Haha.

Such energy you have with projects waiting in the eves. I have several projects from years ago, and now my MIL has given me some of hers, yikes. (she is 90 yr old, some of her material is nearly that old it seems.) That sewing room looks wonderful. I have always wanted to have a chenille bedspread and one made into a bathrobe, too. Now that spring is in the air, I might get to some sewing, drag it out to the dining room table.
Scamp, he was a member of the family I bet. Happy trails to him.