The Rare Stitch
Unraveled... and mended

I've had a few 3- or even 4-day weekends lately and, while I really do love my regular Wednesday off (I like to think of it as a "mini-weekend"), there is something to be said for three or four days off in a row. It's fun to get out of town, of course, but it's sometimes just as fulfilling to spend those days at or close to home.

1 -- Relaxed. No bra, no shoes, no makeup, PJs until whenever I wanted (or someone let me know they were on their way over)... 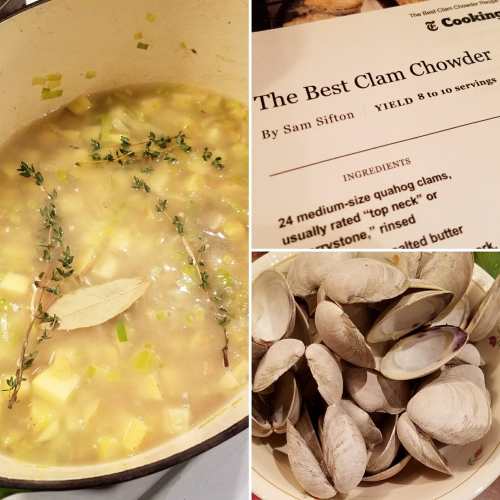 2 -- I made Homemade Clam Chowder! I've had clam chowder a million times -- out of a can, or at a restaurant (probably out of a bigger can) -- but I've never made it at home. One reason for this is that I live in Wisconsin and we don't have clams like that (I don't think) and, even if we did, it would be illegal to harvest them. I've also come to know and trust the popular and well-stocked seafood counter at my favorite local grocery, so when a NY Times Cooking recipe by Sam Sifton came across my desk on Friday, I decided that I'd give it a go if there were cherrystone clams to be had. There were, and it was delicious!

3 -- We had a nice dinner at the home of friends on Saturday -- G&Ts, soup & salad, lots of gabbing! We will need to reciprocate! 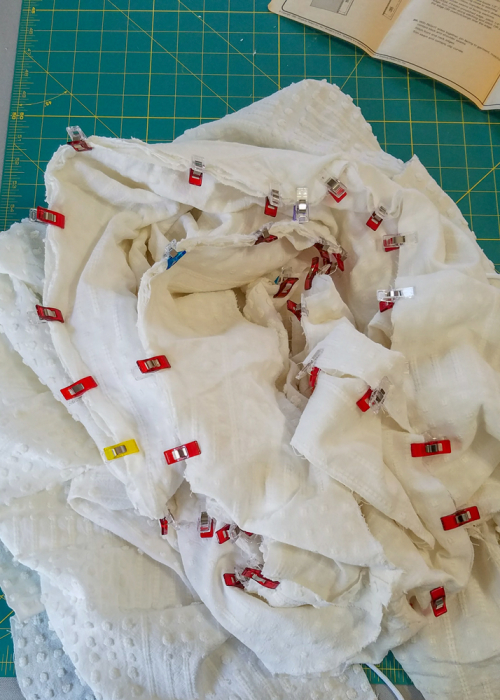 4 -- I "cleaned up" my room a little bit... moved some things around and made some room to do some sewing. This is a long-languishing (as in years) project that made it's wishful way from my mother to Annie to Ali and finally to me. I was sick of "moving it around" and was finally inspired to sew it up. All the pieces had been cut, the pattern was in the bag and intact, and I am moving right along. It's going to be a gift and is a bit of a stealth project at the moment... all shall be revealed in a week or two! 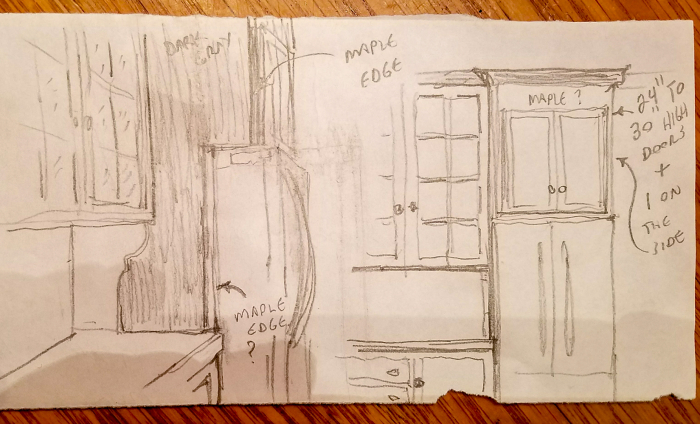 5 -- We continue to ponder & plan (& sketch) the replacement over-the-fridge cabinet situation. Another change has already been made since this drawing was scanned. Doors of correct dimensions have been located, though, so now we're just hammering out some details. (Actually, I just realized that maybe I need to bring home said doors as a visual aid in order to make the final decision!) (Thanks, blog!)

6 -- Planning for the Olympics. I've already set the DVR to record a couple of things.

7 -- I ordered some extra-long DPNs for my Olympic knitting project, and hope to see them in the next couple of days so I can train swatch! 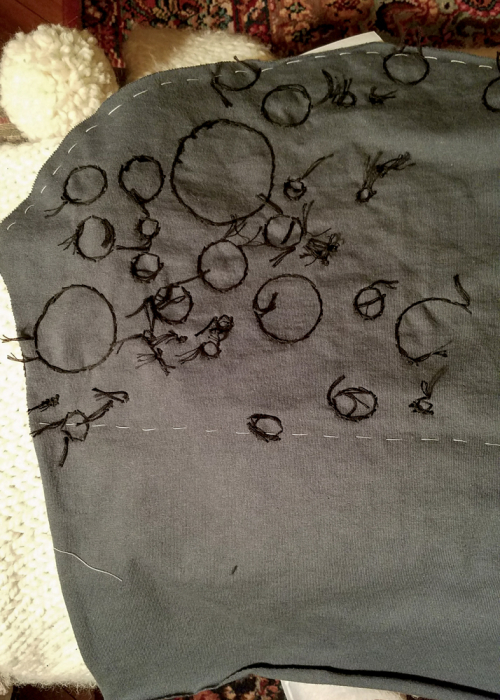 8 -- More sewing. Daily stitching, in fact. And I did a lot more of that than knitting over the weekend! That's the wrong side of a sleeve, and it reminds me of watermarks & spills. 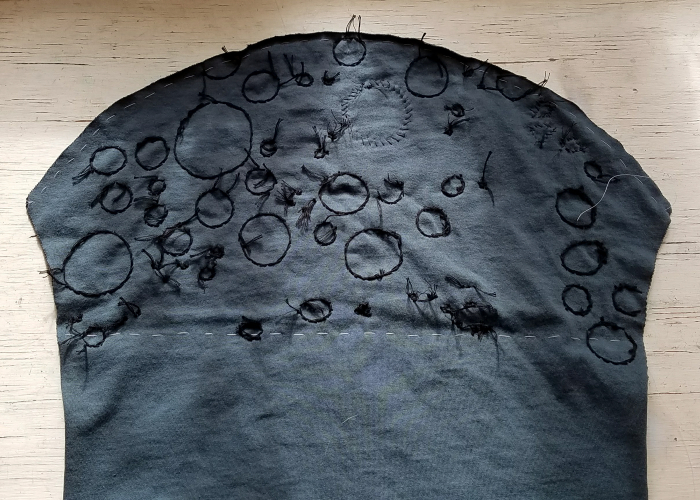 This is a day or two or three later and I've done some applique, too. The basted line is where I imagine (I'm pretty sure... almost certain) that I'll be rolling up the sleeve and I don't think I want watermarks on that part! 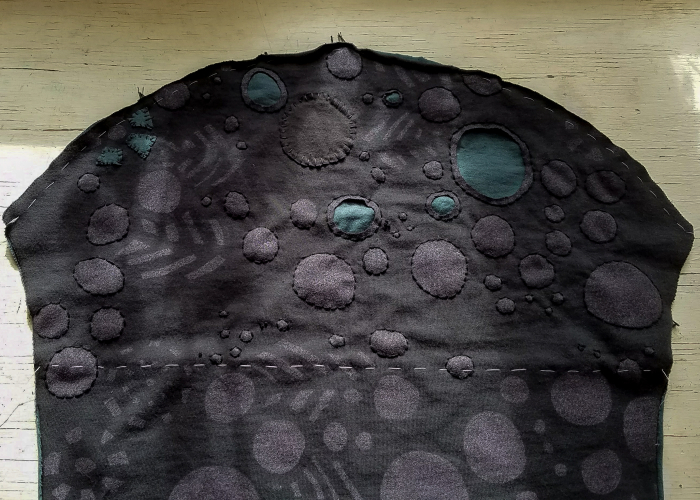 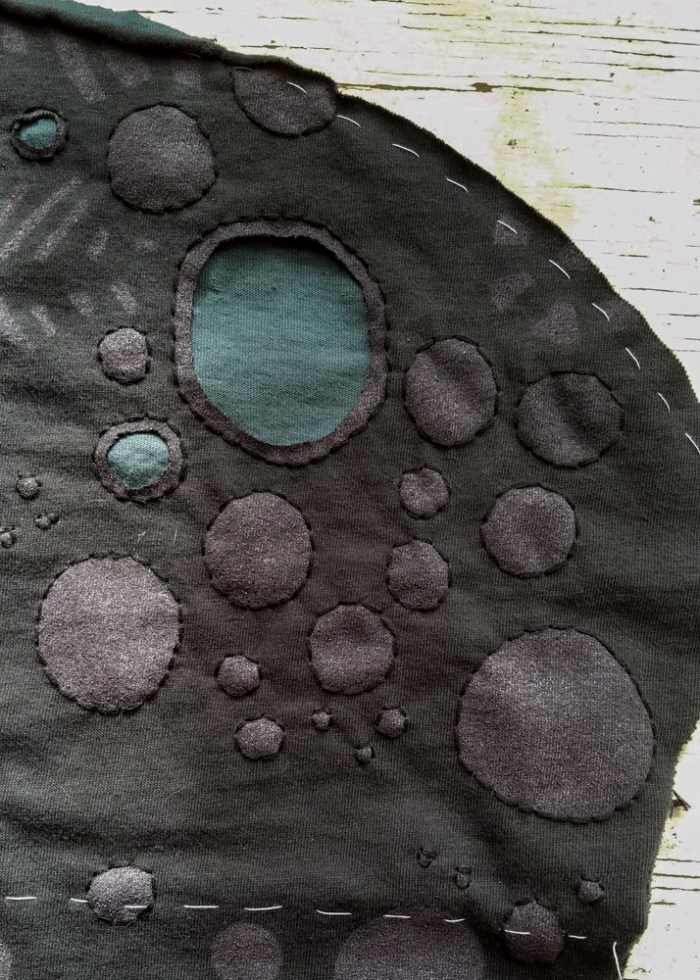 9 -- And cutting! Woman can only sew for so long on an Alabama Chanin project before she must cut! 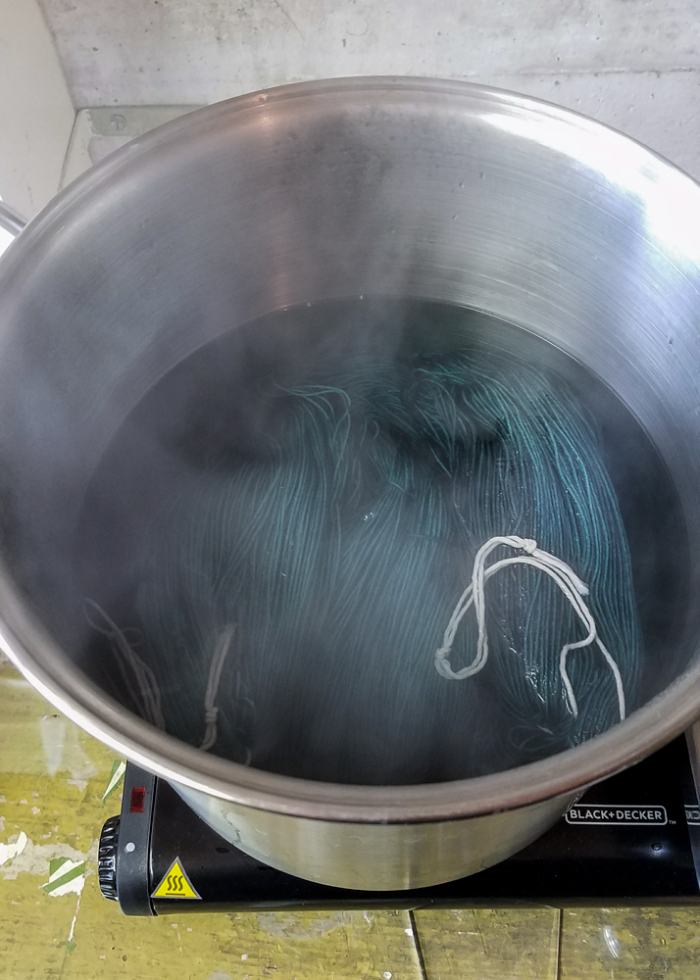 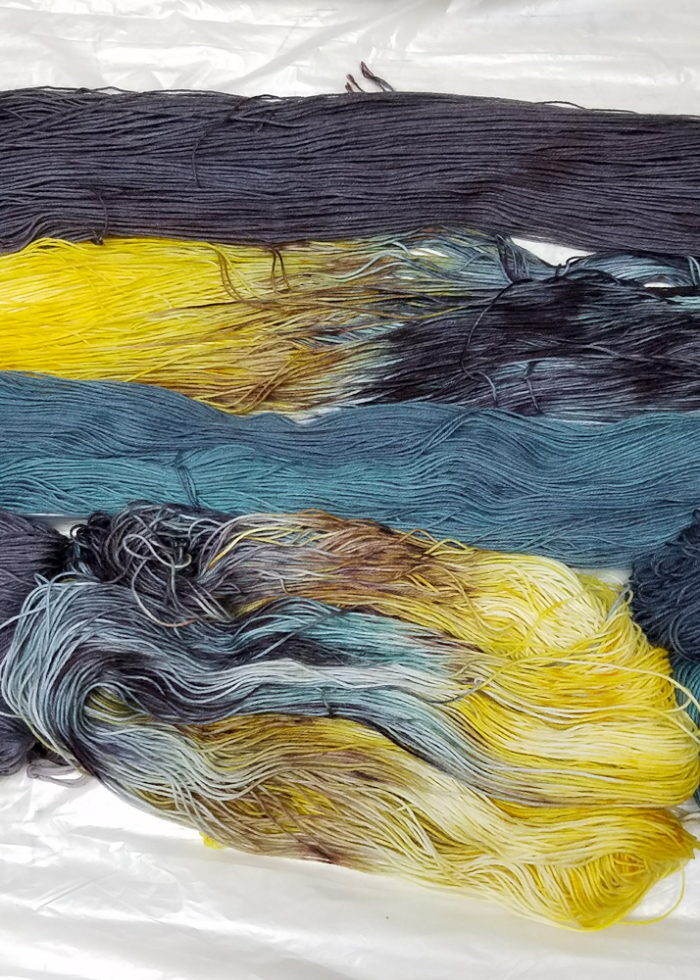 10 -- Even though I wasn't knitting, I did play around with some yarn yesterday. Experimenting in a couple of ways... and I'm happy with the results!

It was back to work today. It's freezing cold but sunny and, happily, we're up to 10:04 hours of daylight!! (Your daylight & happiness may vary.)

I hope you had a great weekend and start to the week!

We must be a little south of you here in San Rafael. We are up to 10 hours and 30 minutes of daylight. You are absolutely right about that clam chowder. I made it a couple of months ago and it was truly fabulous, as well as easy!

"Your daylight & happiness may vary." Perfectly sums it up. We're officially at 10:22 hours of daylight. And on the days when we are getting sun, it is happy times indeed. If only we could get rid of the overcast skies, or they would produce some moisture! Even with that, it's so much better than late December.

Gosh! Grey here almost all day...icy a.m. forecast for tomorrow. Your extended weekend looks like it was lovely. Your daily stitching and yarn are both beautiful!

I make clam chowder frequently because, you know, the Atlantic is 20 minutes away. The best is when I get fresh quahogs. Your weekend looks and sounds fab!

You certainly made good use of only three days! ...and ten hours of daylight :-) I LOVE your new obsession with yellow.

What a perfect weekend, Vicki! I love seeing your AC project unfold. All that planning and thinking is really paying off. (And the cutting is the best part. . .) I'm really excited to see your kitchen progress, though. It sounds intriguing. BRING ON THE DAYLIGHT!!! XO

This is the perfect weekend! I love the sketching! That is fantastic! But, your stitching! Oh man, it is AWESOME!

Wow you packed a lot into 3 days. Love your sewing project. Are the seam allowances only 1/4"? I'm impressed with the detail you put into the sleeve. Does the other sleeve match or is it different? Yum to clam chowder-I love it but never made it. Yours looks great-not too thick. Love the colors on your dye job!

Daylight is more noticeable at each end of the day, but Smith is in heaven with warmer days as he as already spent a couple of evenings in the garden! Today will be near 60, but we're back to the 40s tomorrow (for a few days). I'm hoping for more blue sky as it's been gray through most of the warm days. :( LOVE your AC project and the way it's coming together. I see it inspired your yarn colors, too. I love that spot of yellow you're using, too. You must have something in mind for the yarn. No? xo