Weekending: At the movies

Saturday was Day 1 of our local theater's Best Picture Festival, which I have attended on-and-off for the past several years, and which has only been improving over the years as well! The first time I attended, the breaks were so short between movies that we had to choose between going to the restroom or visiting concessions, and there was barely enough time for either.

This year the breaks were probably around :25-:30 (same last year) and they included a printed schedule that detailed the times exactly! So helpful!! I noticed on Friday that they'd also added a ticket upgrade to include lunch & dinner options as well as unlimited popcorn & soda. My basic ticket option included a 20% discount on food & beverages.

It's becoming much more popular, as there were fewer than a half-dozen seats available at show time!

Here are some thoughts on these... I don't think I'm giving up any spoilers.

I'd previously seen The Post, and figure I must have slept through about 85% of it the first time, so perhaps "seen" isn't really the correct word. Heh! I know I nodded off for a few minutes on second viewing, too, but don't think there was much overlap. It's a good movie, I learned some things, and love me some Streep & Hanks, but it is just a little bit slow...

I think Lady Bird was my favorite on this list -- funny, sad, sweet. I loved Laurie Metcalf (she was one of my favorite things about Roseanne back in the day and I'm curious about the reboot), and Saoirse Ronan was perfect!

Phantom Thread was... Daniel Day Lewis was... immersed in his quirky character, as usual. I liked Lesley Manville as his sister -- really, she was pretty great. The little peeks into '50s couture fashion and dressmaking were cool. Yeah, I'm not so sure about this one... I didn't really feel the chemistry. (I dozed off a bit during this movie, too.)

Get Out was... HOLY HELL! I kept thinking that this is Guess Who's Coming to Dinner mashed up with Stepford Wives mashed up with Frankenstein and, yeah, you'll just have to see for yourself how that all mashes up!! I had an uncomfortable/uneasy feeling almost from the get-go, as I'm sure it was meant to be.

Call Me By Your Name was just a wee bit angsty -- the way a coming of age movie should be, I guess. It was also gorgeous (Italy! Armie Hammer!)... also a little bit funny, sad, sweet. 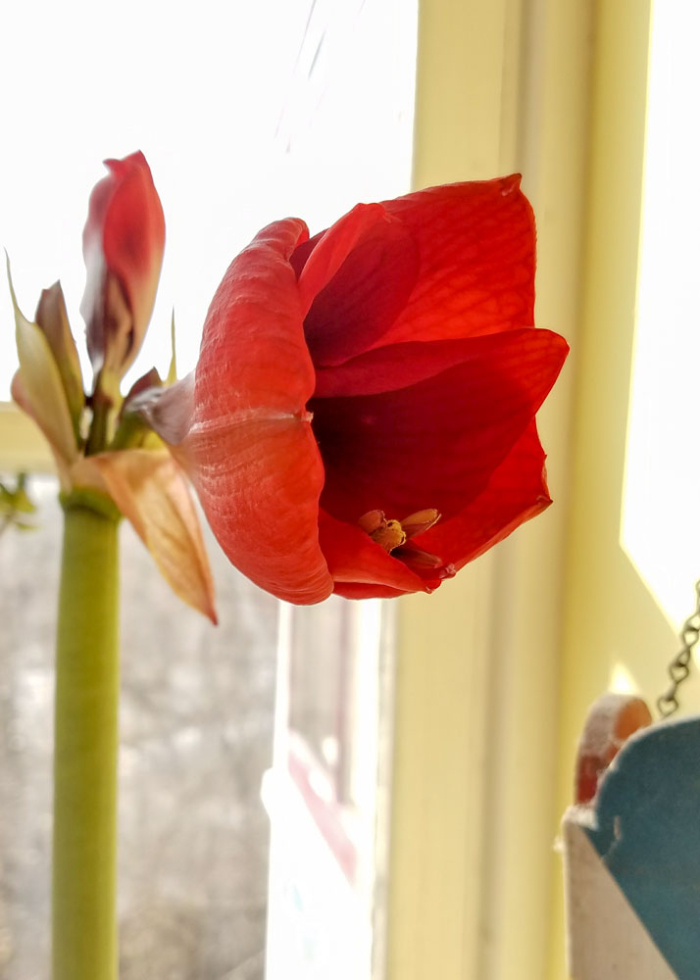 First up: Amaryllis check. We have one bud beginning to open, and another beginning to shoot up. These plants are of the variety "hardware store," so nothing spectacular... and yet, when is an amaryllis NOT spectacular!?? Loving every minute of the unfurling.

Next up: Dyeing. I've done a TINY bit of dyeing over the past few weeks, but it's been pretty busy around here, so I made it a point to head down there yesterday morning... and I had a mission. 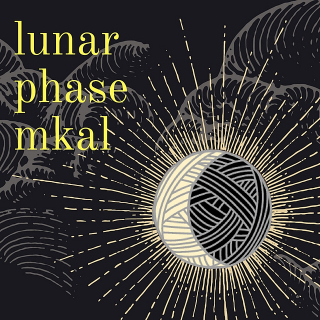 So, a few weeks ago Larissa Brown's new Lunar Phase MKAL came across my radar and lodged itself in my brain (haha, Kat!). Set to begin on March 23rd, there is plenty of time to gather skeins and contemplate a palette... 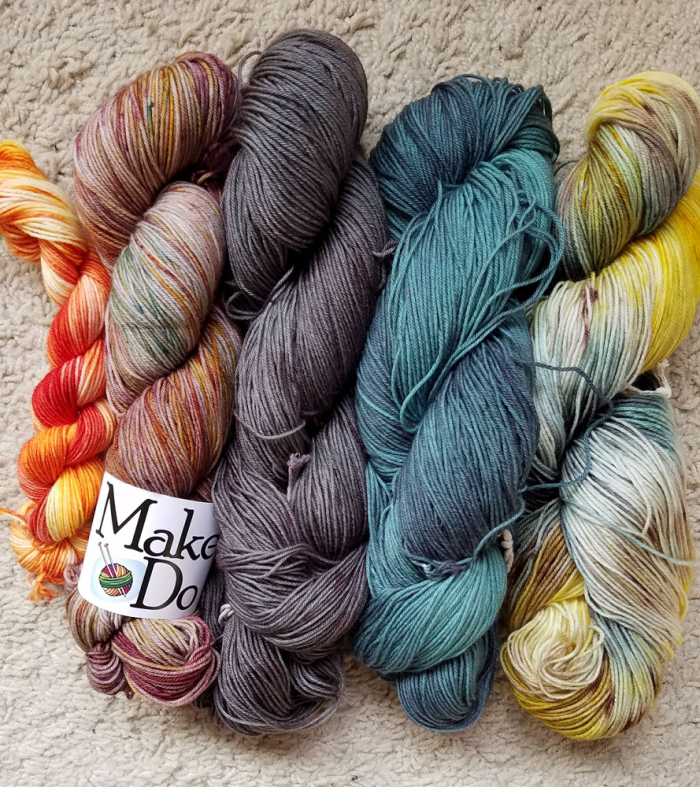 Larissa suggests a light, medium & dark color, along with a little bit of pop! Those two big hanks in the middle go really well with the ones on either side, but they are about equal in terms of value. 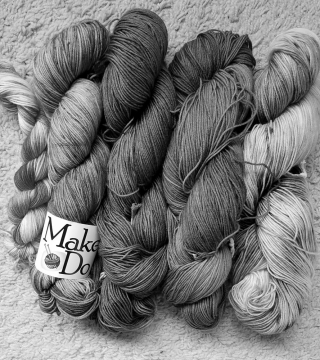 So yesterday, I wanted to play around with that blue-green a little bit... 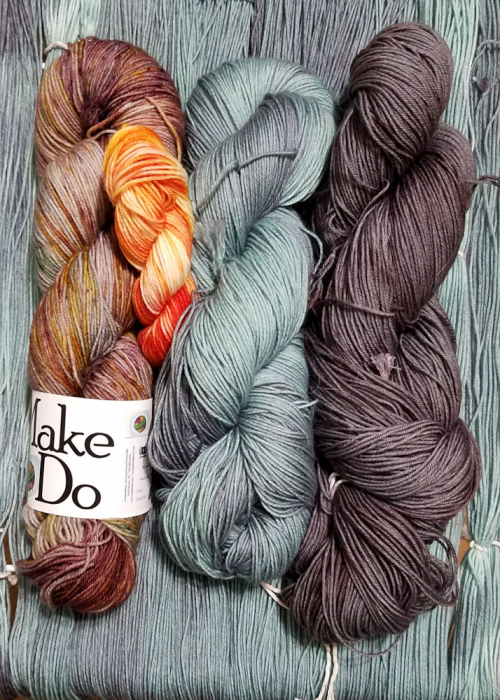 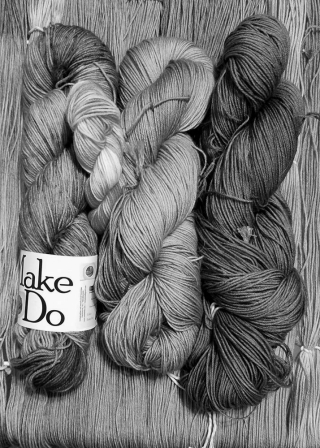 And I think this is a little better value-wise!

Or in this order? Or with the yellow one? Gah! It's time to wind it all up and do some swatching!!

On that list of movies I would say The Post was my favorite and then Lady Bird. Phantom Thread is just . . . weird. You haven't seen my top two yet, can't wait to hear what you think of them!

I don't know how you can sit through all those movies in a row --- but I'm so glad you did! I am a big Lady Bird fan, and I also loved Get Out. Phantom Thread? Wow. That was just One Weird Movie, y'know? (Still shaking my head over that one. . . ) Your amaryllis is stunning! Such a great red. (You're right. Every amaryllis is a gorgeous treat!)
XO

I haven't seen any of the Best Pictures, but I think I would really enjoy seeing them at a day-long Festival, especially if it included lunch and dinner options. I like seeing your yarn choices, thought process, and look forward to seeing how the Lunar Phase unfolds. And I agree, every amaryllis is spectacular! The color and texture of those petals are just lovely.

Like Bonny, I haven't seen any of those movies yet. I could never do a marathon - geeze, I have trouble sitting still through one movie (ants in my pants or something). But I do want to see them - probably at home when I can stream or download them. That way I can pause, get up, move around, etc.

The etc. in your post cracked me up - hadn't thought about Yul B. in quite some time. We caught him in (of course) The King and I at a very small theatre locally years ago - it was amazing!

The shot of your Amaryllis almost makes it look like a tulip! The really are all gorgeous, aren't they?

Ahhh! I love your yarn choices Vicki! I will get mine sent to you today. I began swatching yesterday and while I like them, the dark was not different enough. I selected a different dark and swatched more. My pop of color is the next thing I need to work on! Swatching continues!

Your dyeing is beautiful and I think you're onto something with your last picture. I've seen The Shape of Water, Get Out, and Three Billboards. We have The Darkest Hour winging its way to us, but I really want to see the others on your list. I, too, don't know how you sit through such a marathon of movies. It would be snoresville for me! Yes, EVERY amaryllis is magical. Next year I'm spacing out my plants so I have blossoms all through the winter!

The King and I was on TV this past weekend - I love that movie! ... and look forward to watching The Post and Shape of Water when they hit Netflix. Super excited with your yarn choices for the MKAL - I think your piece is going to be beautiful no matter which of those last options you choose!