...or What I Did Over The Weekend!

First of all, it was 100°F or darn close to it all three days, so I didn't spend a lot of time outside. 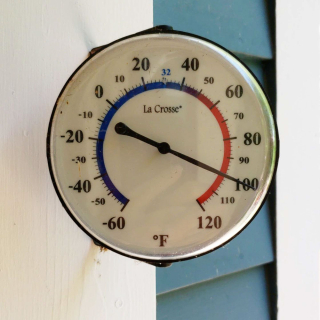 To quickly recap the weekend: Ali & her family came over on Saturday night for a send-off barbecue for Maddy, who left for her summer camp job on Sunday morning. I'm not sure when we'll see Maddy next -- maybe July 4th-ish? And probably briefly before she heads to Oregon in late summer/early fall. Thankfully, she's found housing out there for the vintage season, so that's settled. 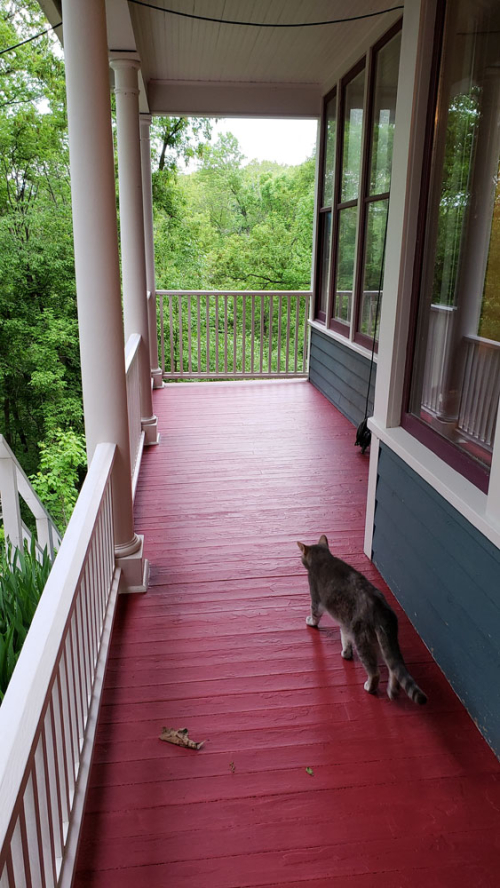 And she did a great job repainting the back porch -- ceiling, pillars, railing, window trim, and floor -- before she left!

Kate was away with friends for the weekend, returning Sunday evening. We moved the last load from the apartment into the storage unit that she's sharing with Maddy. And we bade her farewell on Monday morning as she began the drive to NYC/Brooklyn to install her curated show CONVEYOR for Greenpoint Open Studios this weekend; I'll meet up with her there on Thursday. She's still heading to the UK when she returns, but there have been and continue to be Changes and unchanges and rechanges... and stay tuned (because it's un-/re-/changing almost daily at this point! 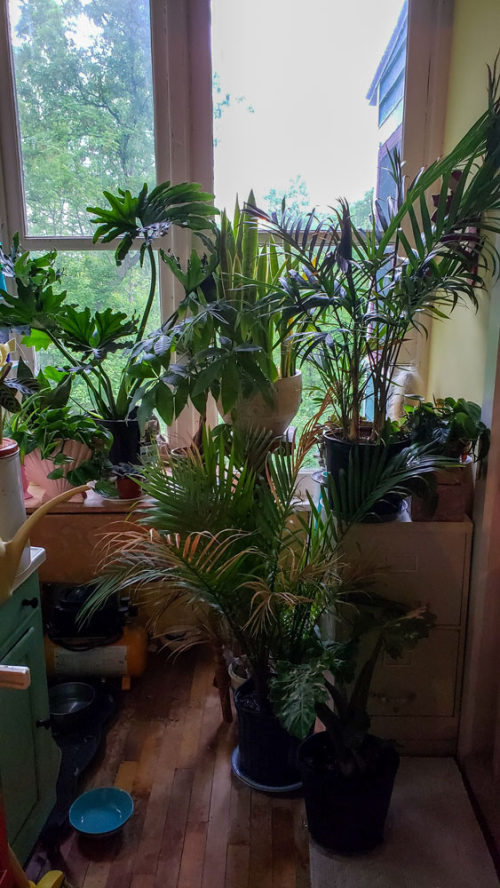 Kate's plants have come to live with us for a while!! It's like a jungle in there.

OK. My main event of the weekend turned out to be finishing the Alabama Chanin Swing Skirt that I started last week!

I've been wearing the original more and more, and had been wanting to make another one for quite a while. My original thought was to try using one (or more) of the souvenir t-shirts I've picked up in the last year or so -- House of Blues (St. Louis), Country Music Hall of Fame (Nashville), FAME (Muscle Shoals) are vaguely what I had in mind. What caught my eye was a shirt from La Sagrada Familia in Barcelona! I'd never thought of it in terms of a skirt before, but it was obviously dying to be one. 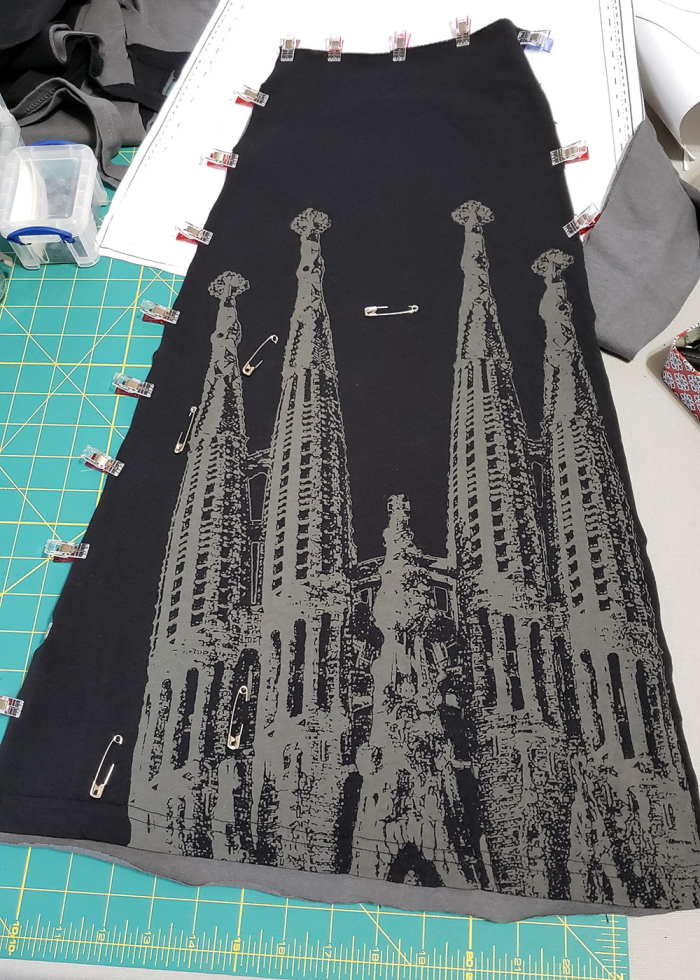 Naturally, I didn't take a "before" photo, but that's basically the front of the shirt on one of the skirt's front panels, and the back became the other front panel. I always buy the largest size that I can, but this one wasn't very big and it was an off-center design, so I made the most of it -- you can see that I left the hem intact. For embellishment, I've only embroidered around the outline of the cathedral's towers using black thread.

I found a gray men's 2X long-sleeve t-shirt in the stash (yes! there's a t-shirt stash) to use for the bottom layer (that Barcelona shirt being slightly lighter in weight than I prefer and, also, I'm just a bit more comfortable with two layers). I cut the front skirt panels from the front of the shirt and the sleeves were shaped almost perfectly but just a tad too short (due to armhole shaping) to be the other two panels... it was oh so close! I decided to do some piecing and make it work! 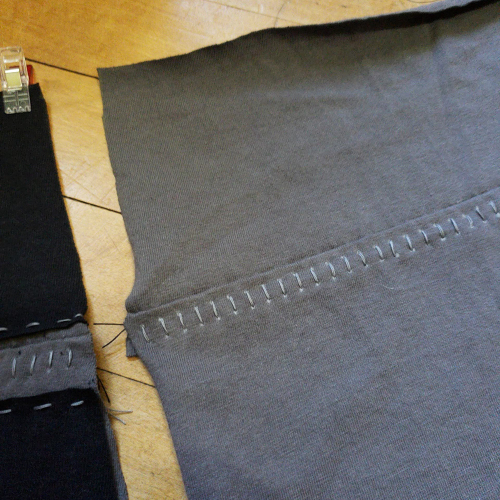 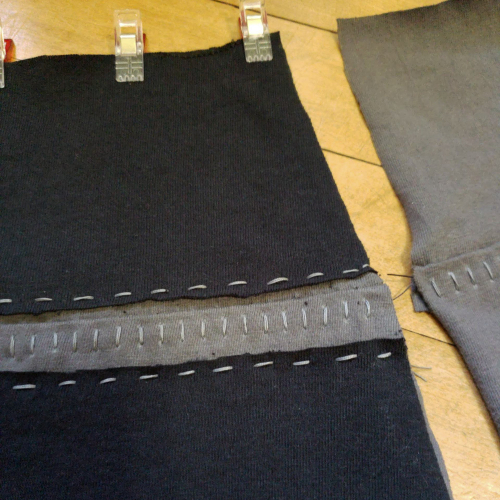 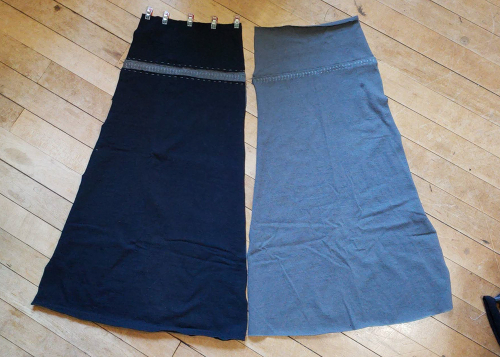 I basically made a yoke using remaining fabric from the front & back. Another black t-shirt from the stash was cut for the top layer and I suppose I could have left that piece intact, but decided to stitch & cut to expose my Frankenstein work!

Then I had the bright idea to add side seam pockets! I love pockets, don't you? I used the pair of pants I was wearing to get the placement right. 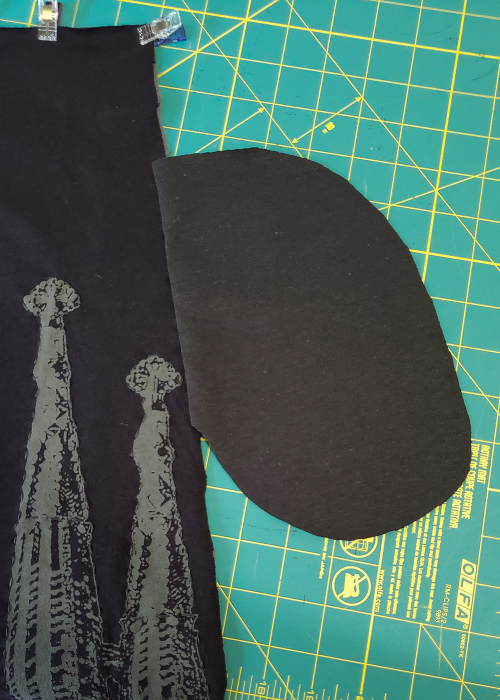 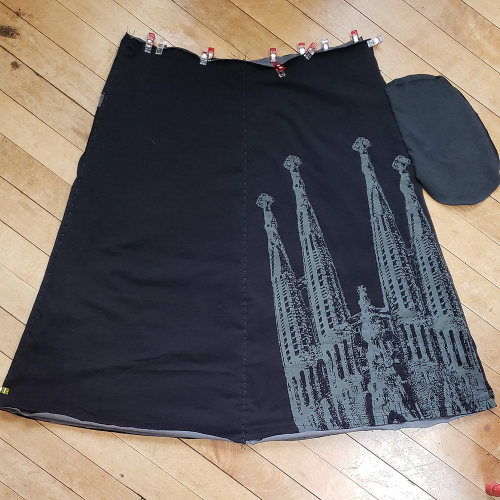 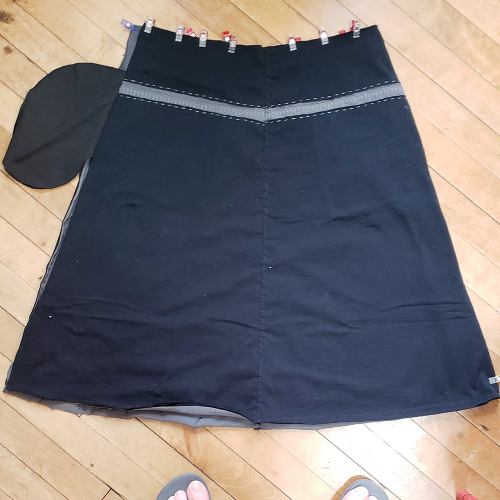 I got a little tripped up because of "felling" the pocket seams, and ended up felling an entire side seam to the front of the skirt because of the way the pocket was inserted (ideally, seams should be felled to the back). I wasn't gonna let that bother me. 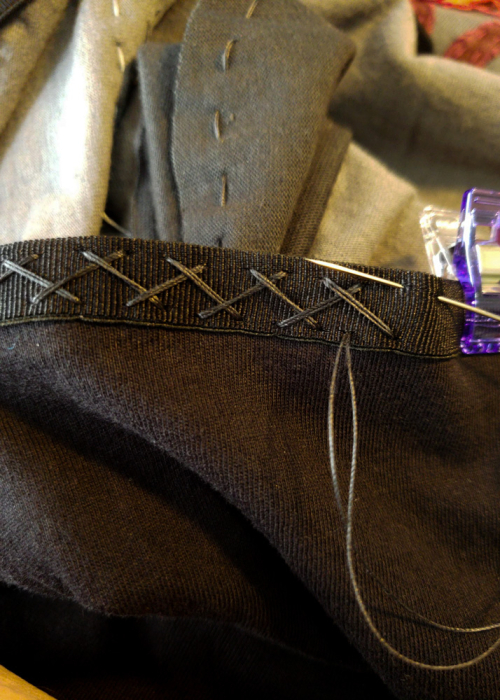 After the pockets & seams were sewn and felled, it was time for waistband elastic! I really love Alabama Chanin's fold-over elastic, which I attached with a nice stretchy herringbone stitch. I used the same method on my first Swing Skirt. 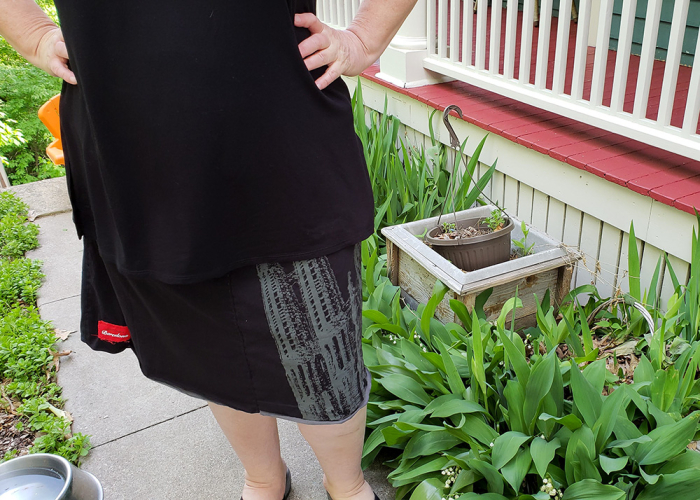 Voila! It's a skirt!

On Monday morning, I realized (again, for the nth time in almost 60 years) that as much as I really do love a nice side-seam pocket, it definitely does not love me/my figure in a garment such as this. 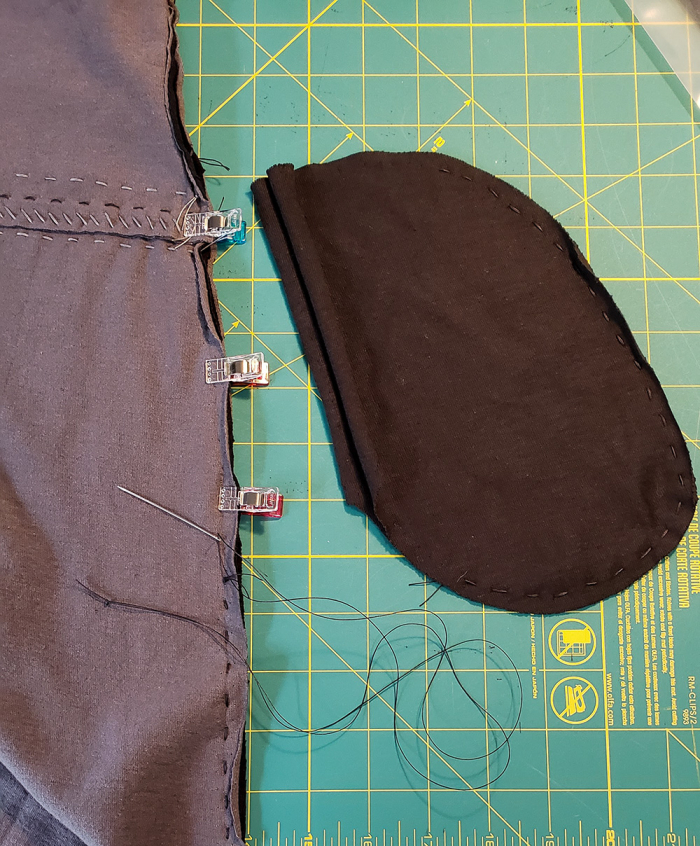 So I took them out! It was not as painful as it sounds -- one nice thing about hand stitching is that the stitches are BIG, and I didn't even have to rip the entire seam. Once the seams were re-sewn and properly felled (to the back!), I was much happier with the fit. 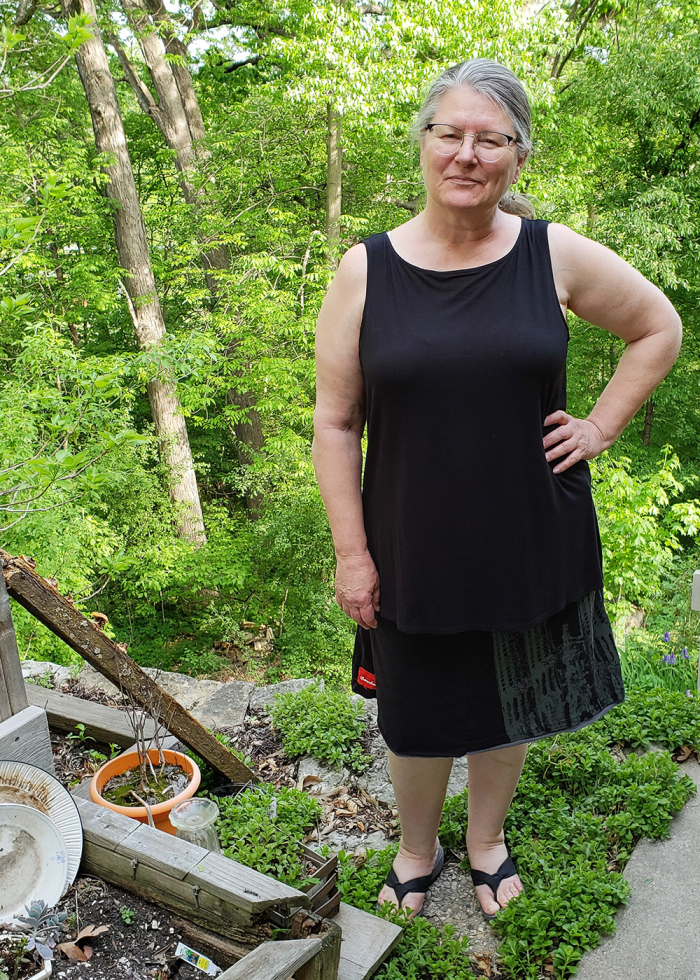 And I'm wearing it today!! 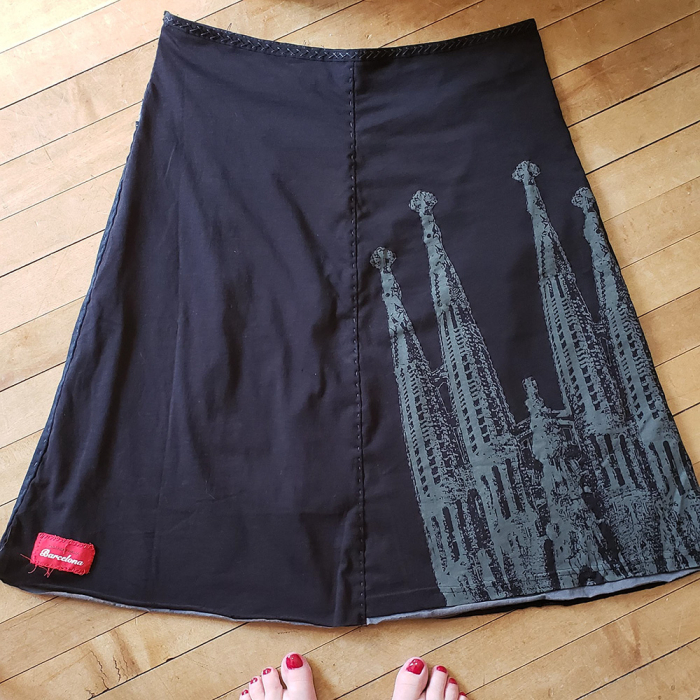 Oh yeah, I gave myself a pedi yesterday for the first time in forever! 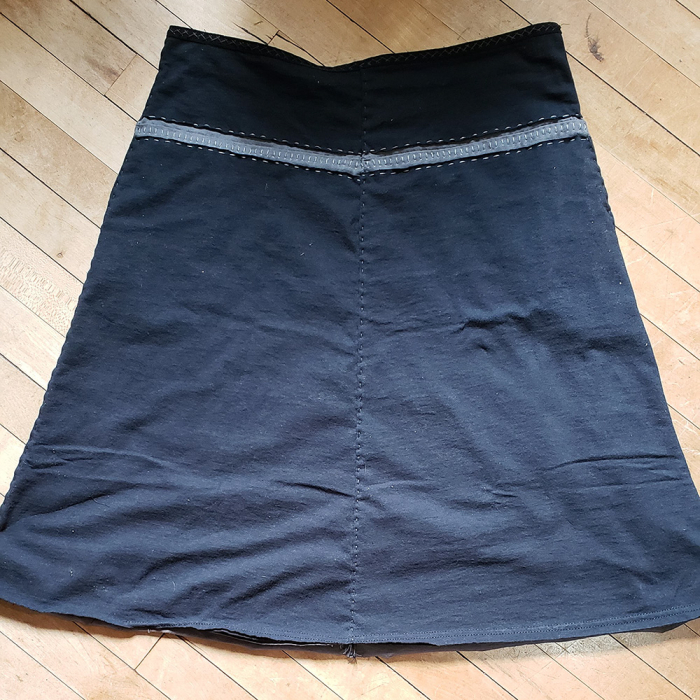 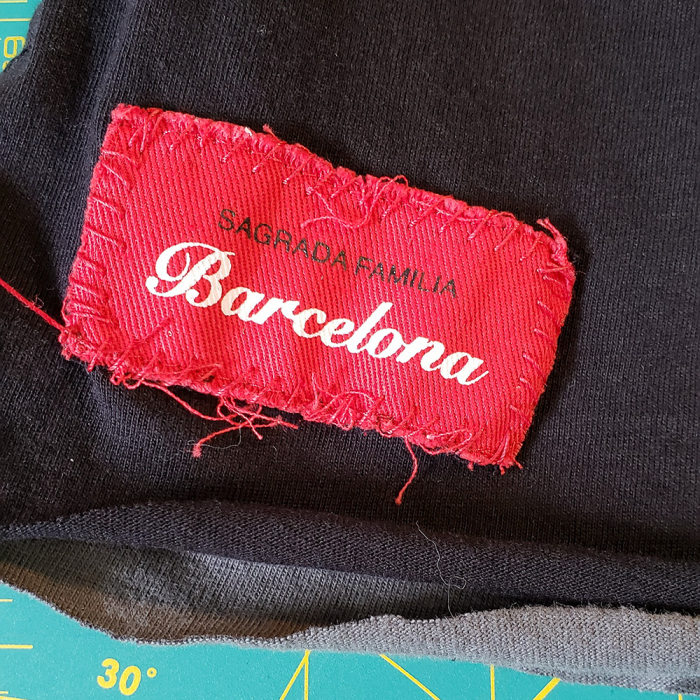 A favorite detail is this patch that was stitched to the front of the original t-shirt -- with all the threads hanging out, just like that -- and I just had to keep it! I love this skirt and will certainly be making more.

You can learn to make your own Swing Skirt from Natalie Chanin herself on Craftsy:

LOVE, LOVE, LOVE it!!!! It turned out just GREAT -- and I love the Frankenstitching on the back yokes. Ingenious! (And I know just what you mean about those pockets. Sometimes they are not meant to be. They pull. And add layers where we don't want to add layers.) XO

WOW, Vicki! Your skirt turned out perfectly - I LOVE the details you included ... and all your hand-stitching is beautiful! thank you, too, for the update on Kate. This NYC trip seems well-timed for you two.

Love the skirt-what a great use of a tee. I have pockets in all my pants, dresses and skirts. if they don't come with them (usually I don't buy those) then I add my own. Some fabrics require me to stitch or attach with iron on facing , the in seam side pocket onto the skirt front for stability and to keep it from gaping.

That's really fabulous, Vicki. Even though I can't picture doing this sewing myself I really enjoying seeing what you create and I do love the idea of repurposing those souvenir t-shirts.

That t-shirt was clearly meant to be a skirt, and you made it work to perfection! I love seeing how you did it, will look at some men's xl shirts around here with a new eye, and may even try this myself someday. You and your new skirt are going to look great in NYC!

You have the best ideas! The skirt is fabulous in all the little details. I clearly need to spend more time in thrift stores looking for giant t-shirts to repurpose!
Maddy must be a ball of energy! What a big job she took on and finished so beautifully! Good luck to both Maddy and Kate as they go through a summer of changes and challenges. All your girls are accomplished and living life on their own terms-a wonderful way to live!

WOW! LOVE this skirt. What a fabulous idea and a fabulous finish! Love seeing all the progress pics and I know just what you mean about those pockets...I love them and want them and then hate them - lol. That patch is so cool too. And your Frankenstein stitching - you crack me up.

Maddy did a fabulous job on the porch. Y'all are just so busy, busy, busy...but having fun. Summer will be zooming by for you - enjoy!

This is everything great about making things yourself. It looks fabulous on you! I love the use of souvenir t-shirts--I always want to buy them but I don't actually wear that style of top....this opens up a world of possibility!

I love everything about that skirt but nothing more than that label! Genius! Your trip is so close!

If anything could make me drag my sewing machine out again it would be this skirt! I love that you used T-shirts! Your photos are great. Thanks for sharing with us. Linda

My favorite parts are that it's Gaudi architecture, and that red Barcelona label on the outside. Great work!