Weekending: The Rest of the Story

I stopped by my LYS on the way home from work on Friday to find some buttons for the girls' sweaters. 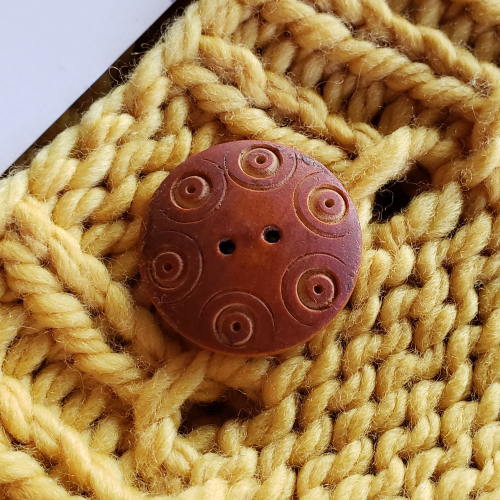 I can't believe I still haven't sewn them on! It was a very busy weekend with lots of distractions and many things buzzing 'round my brain. I'll buckle down and get that done because, believe it or not, it has been sweater weather the past few days.

There was more bad news on Friday and, combined with Cristian's reading of the news, the piece by Annie Leue that we'd seen at the SAIC Student Show not even a week earlier came immediately to mind, prompting the post above. We did not see/hear Cristian's entire performance, but he later made a moving reply to my post on IG (click through for all the photos/comments).

Nothing against Harry & Meghan, but I just couldn't muster much enthusiasm for the wedding. I was happy to see a recap or two and some photos and, in hindsight, I probably would have enjoyed it... but not as much as my mother would have, and perhaps that was another reason for my lack of interest.

Instead, I had a fantastic day with Junah & Ginny on Saturday! 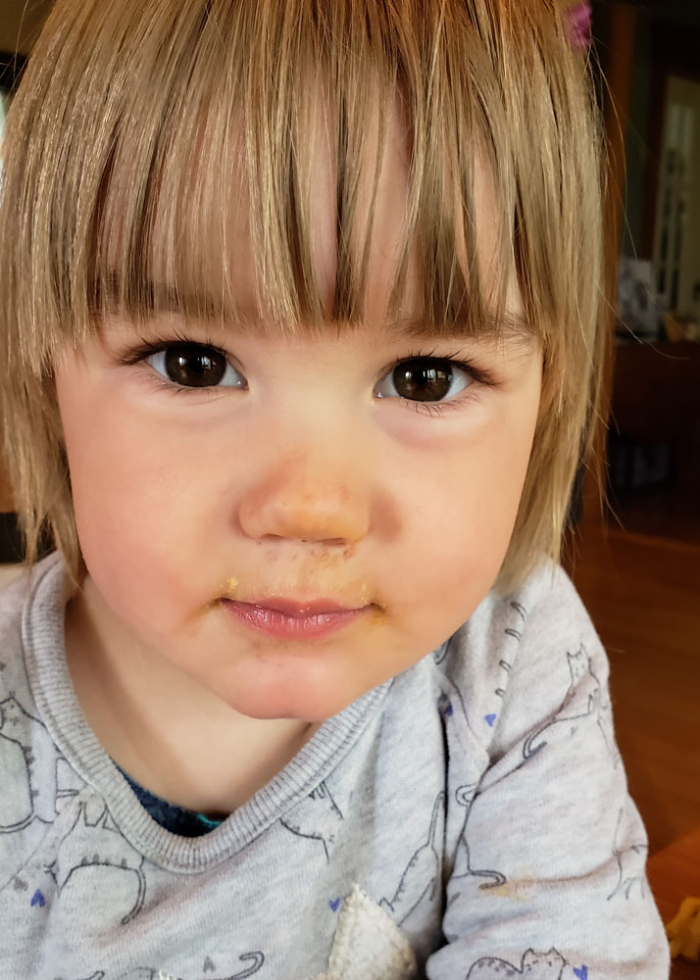 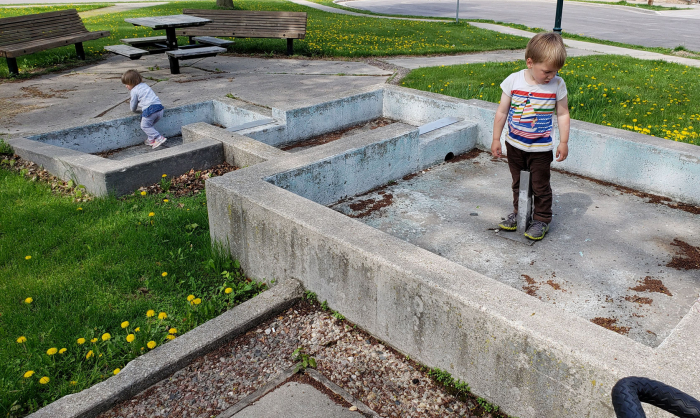 They brought over some new bikes to leave at my house and we rode around the 'hood to check on things... the remainder of the sewer/water work on a few streets over, the old water feature at a park a couple blocks away that's been on the docket for a (someday) re-do, the sad condition of sidewalks and settling earth due to the above sewer/water work that took place on our street last year. I called the City Engineer yesterday (again) and am awaiting a return call about when it'll all be fixed. They came up and put some safety barriers in a couple of places a few weeks ago, but even those are being swallowed up as things continue to deteriorate. It's not a good situation!

Ali came over with all the kids on Sunday, too, and we had a nice impromptu dinner together with Kate & Maddy. 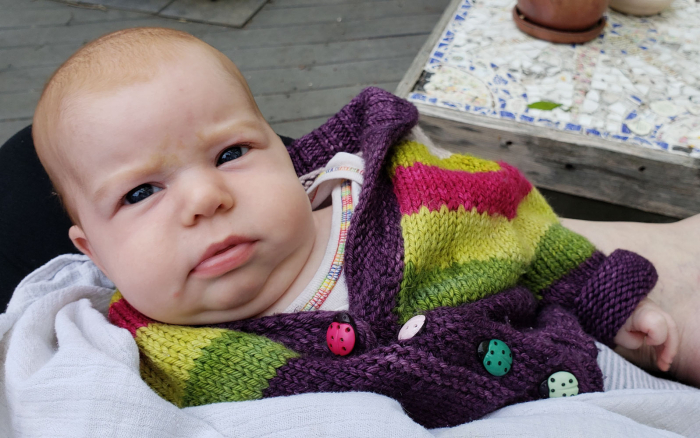 This little one! She's wearing the Elwood cardigan that I made for Gin a couple of years ago -- it's a little big for her, but look at that cute pudgy rolled-up sleeve. 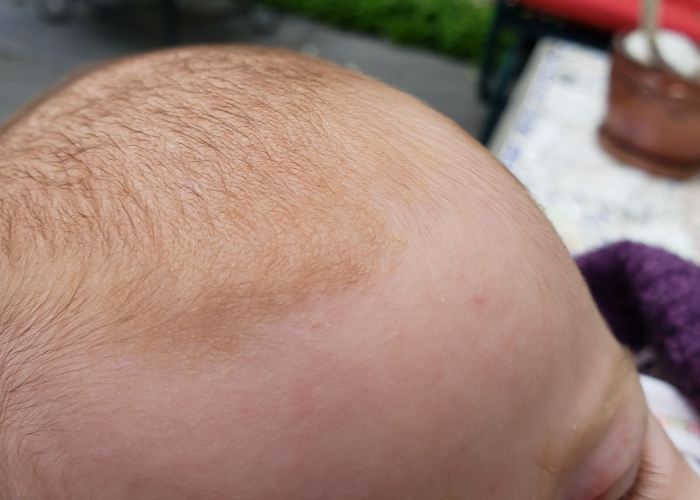 I think she's looking more and more "gingery" every time I see her! What do you think?

During a little chat with Ann in Spain on Sunday, I also talked with Addison for a bit and he sweetly asked about the baby. I told him that we're just beginning to see the hint of a smile now and then, but by the time they're here in July she'll be smiling ear-to-ear. 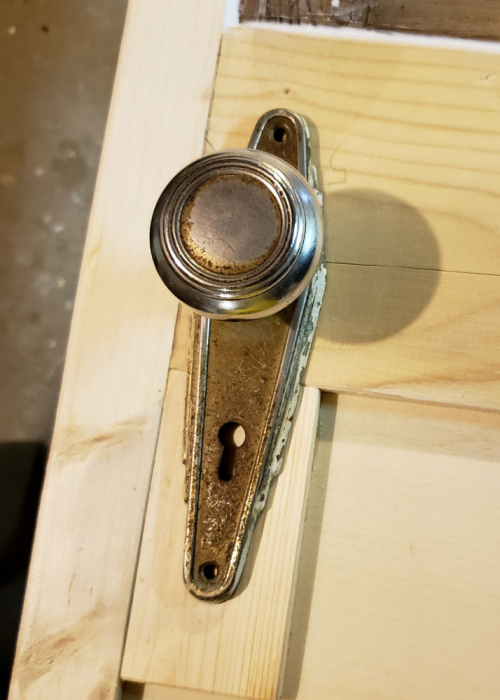 Work on the kids' clubhouse continues... there a door manufacturing operation in our basement over the weekend. The doorknob came from "the bucket o' knobs" that Rusty's collected/saved over the years. I think it'll soon be finished!

I discovered a couple of new-to-me beers: 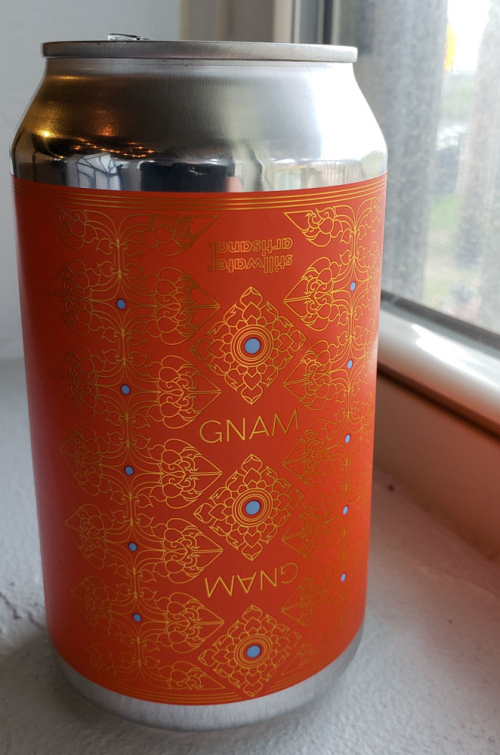 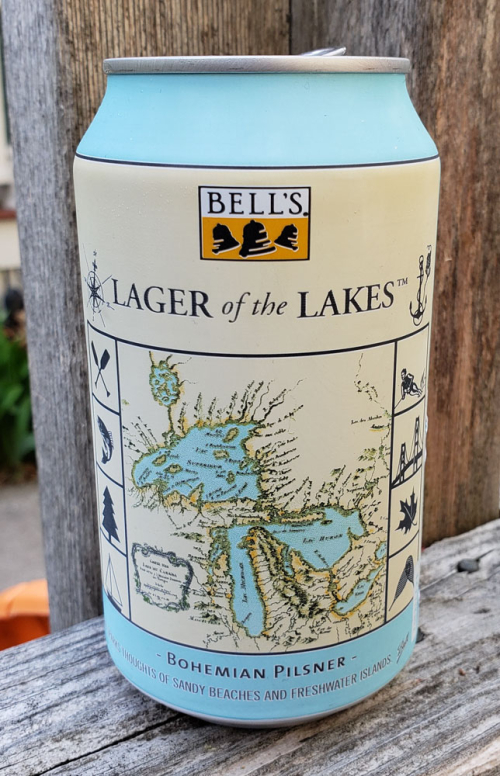 The Gnam Gnam was very good. Had I known beforehand that it had mango I wouldn't have tried it, but I couldn't even tell... I did get a hit of the Thai chili and it was perfect! I also enjoyed the Lager of the Lakes -- more than I thought I would, actually. Also, the design of both of those cans is pretty spectacular!

Due to coworker scheduling, I had the day off yesterday instead of my usual Wednesday and noticed that it was VICTORIA DAY, so of course!!

I had a long overdue chiropractic adjustment yesterday and a long discussion with her about my tendonitis, which has become a sometimes very uncomfortable/painful shoulder situation, and between the adjustment and a couple of awareness things... it's feeling better today. Here's hoping for continued improvement! 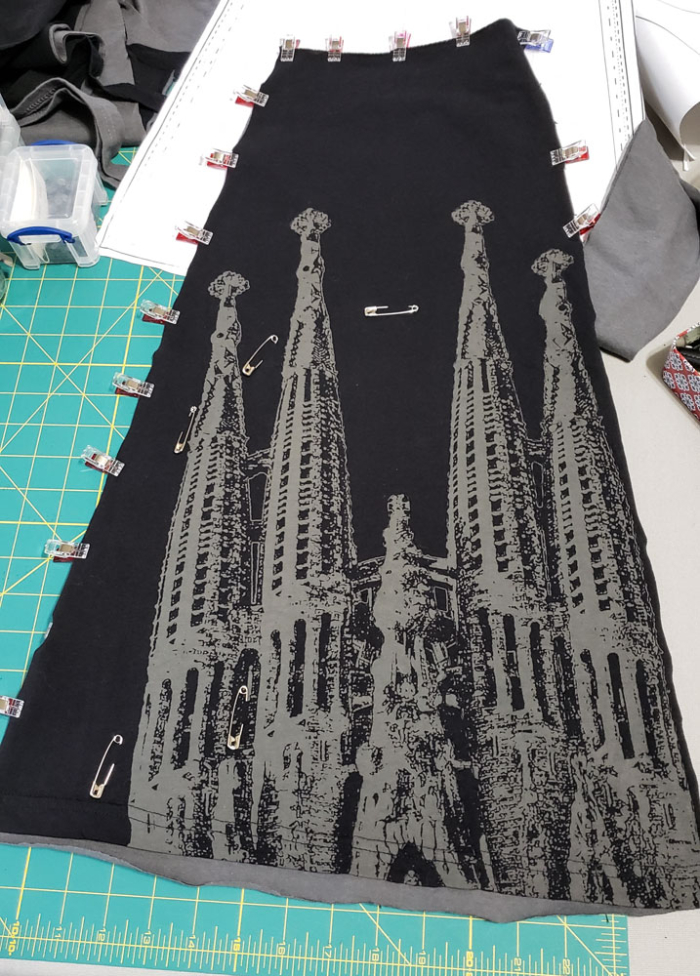 I've had the itch to make another Alabama Chanin Swing Skirt and pawing through my stash of t-shirts, souvenir & otherwise, I came across one that I bought last year at La Sagrada Familia in Barcelona and it was perfect!  The embellishment could go either way because, y'know, GAUDI, but I'm keeping it simple... running stitch in black thread to outline each of the cathedral towers. I can always add more stitching later... at times it screams for beads!

Thanks for all the great comments about my patch job yesterday! It was a very methodical process and fun to learn. I neglected to mention that I have a few copies of that issue of Making (and some of the others) in the shop and would be happy to send them out into the world -- $24 (+ tax if in WI) + flat $5 shipping. Let me know if you're interested! (Someday I'll get the online commerce thing going.)

I love seeing your three grands in clothing that has been made for siblings or even previous generations. They're all far too nice to call them hand-me-downs! I was wondering how the clubhouse was coming along and it looks like finishing is progressing nicely. We looked at a house that had a very small playhouse and I thought what a nice place it would be for reading if I could sit in it comfortably. Sadly, the playhouse was nicer than the real house. I'm going to look for both Loveblock wine and Gnam Gnam beer; that can is gorgeous! :-)

Those beers sound great! We enjoyed Bell's when we visited Kym but sadly can't find it here in MA. I agree that the baby is looking like she'll be a ginger - hooray!

The Lager of the Lakes can is the prettiest beer can I can imagine!

I love Bell's beers! And, that skirt will be so awesome!

I do see a ginger coming (yay!) ... and how wonderful that Elwood is having another run. And for my money, I'm betting Gaudi will have beads before you finish it :-)

Yes, certainly do see gingery hue to that little head!I love the Gaudi skirt and don't think you can go too wrong no matter what you do, but beads sound fantastic! The playhouse is going to be a place of much fun!