...so you don't have to!! I trust that Bonny heeded my warning and had a smoother beginning to her travels today!

Thursday morning, Rusty sits straight up in bed next to me and declares, "SHIT! IT'S 5:15!!"

Um. Suurrrrrre... even if I skipped brushing my teeth and jumped in the car wearing my PJs, we'd maybe see the plane fly over our heads at best!

A bit less starry-eyed, I grabbed my phone, sat down at my computer, and called United. It was slightly maddening to listen to the very calm voice while navigating the menu, and I was relieved when it didn't take too long to speak with a real person. And they were SO helpful, rebooking me on later flights -- at no charge (just this one time...) -- essentially, I was on about a 3-hour delay. Instead of arriving NYC at noon, I arrived around 3:30. Kate had commitments at that time and wasn't able to pick me up, we weren't able to have lunch, and I wasn't able to a couple of things on my list (visit the botanical garden and/or Museum of Food and Drink)... but OMG, it could have been so much worse! 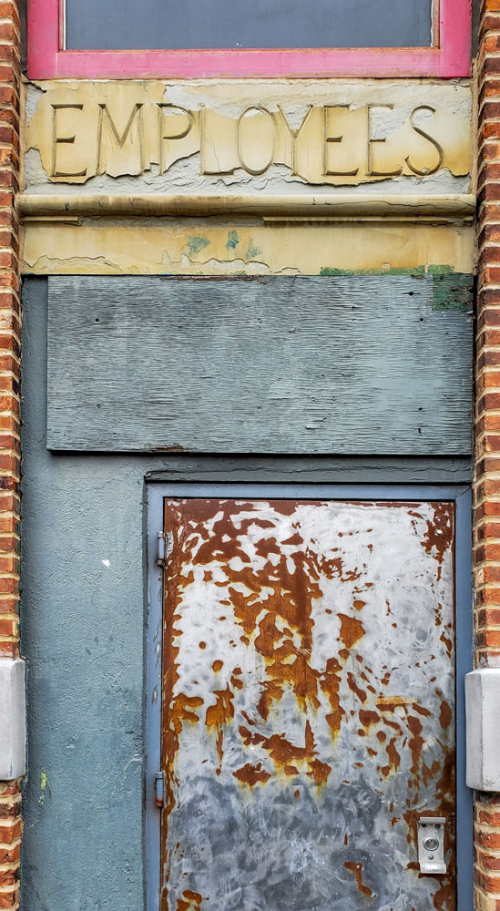 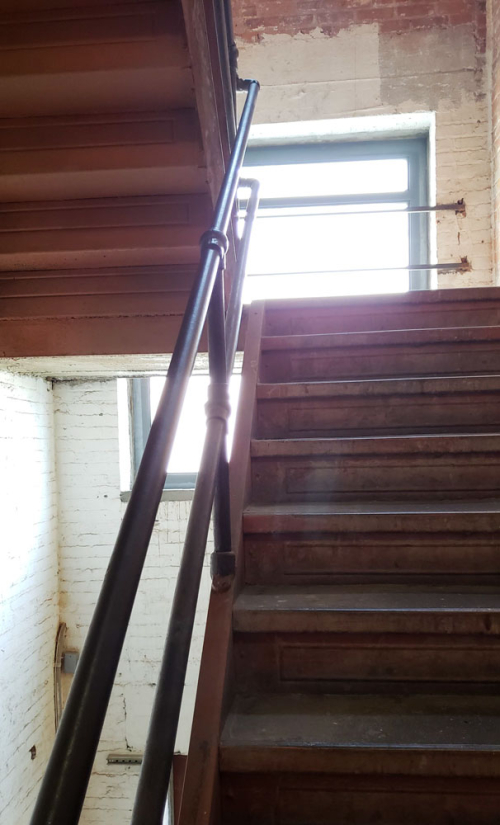 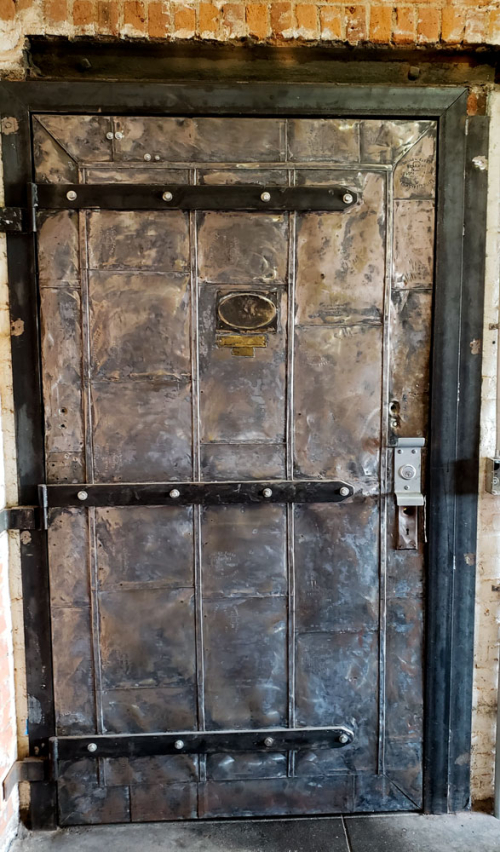 I took a taxi over to Brooklyn to the warehouse where Kate would be installing her show. The actual space (on the 2nd floor) wasn't available yet, so everything was being stored in a studio space on the 4th floor. 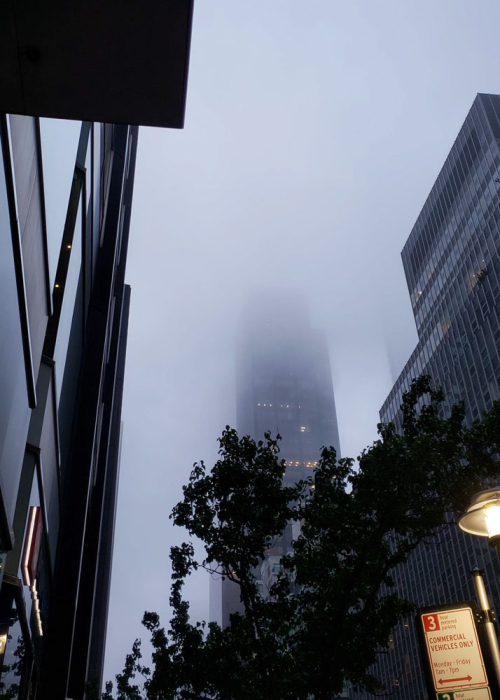 It was hot. Somewhat drippy. Sticky. No AC. No elevator. Ugh.

Prior to my arrival, Kate had been staying in Brooklyn, but we'd booked a hotel in Manhattan for the rest of the time -- until my departure on Sunday, and hers on Monday. She kept her car in Brooklyn, though (free, on-street parking wherever it could be found) and we mostly took the subway back and forth. 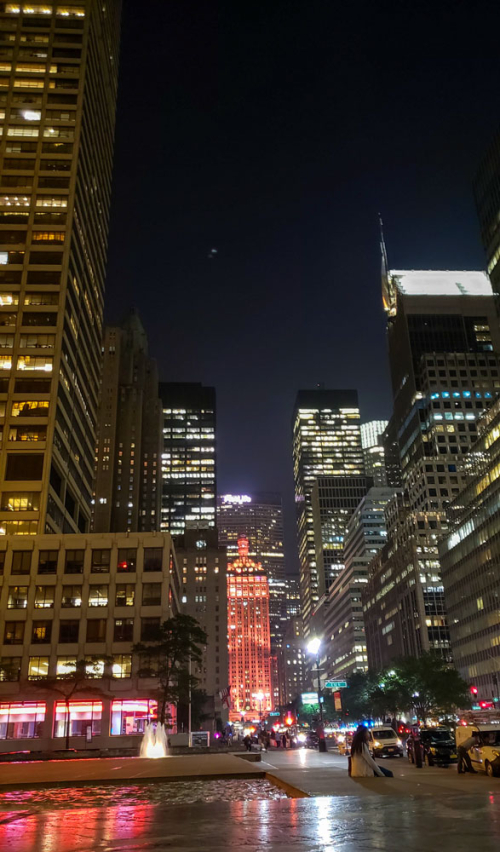 Luckily, the weather improved -- at least in terms of drippiness. 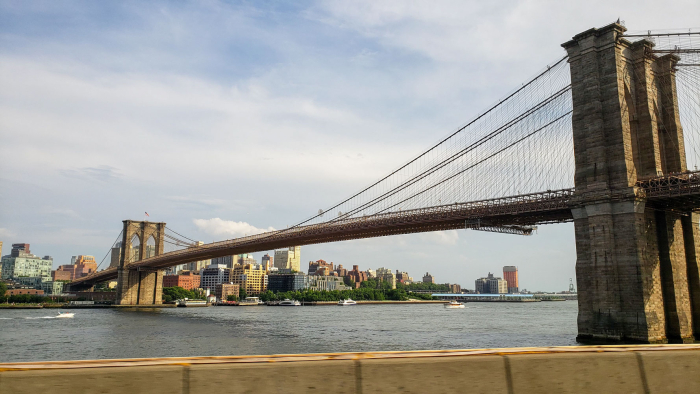 On Friday, Kate was able to get into the venue space in Brooklyn to set up and hang the show. I hopped in the car and drove over to Jersey to visit with Cara! We had a wonderful afternoon, talking about knitting (that AMAZING brioche shawl that she's designing/making), family & friends. We had lunch, made a stop at Yarnia, and picked up C from school (M had after-school activities). The school year is drawing to a close, so things are starting to trickle home... I had a delightful private viewing of all of C's 2nd-grade artwork! 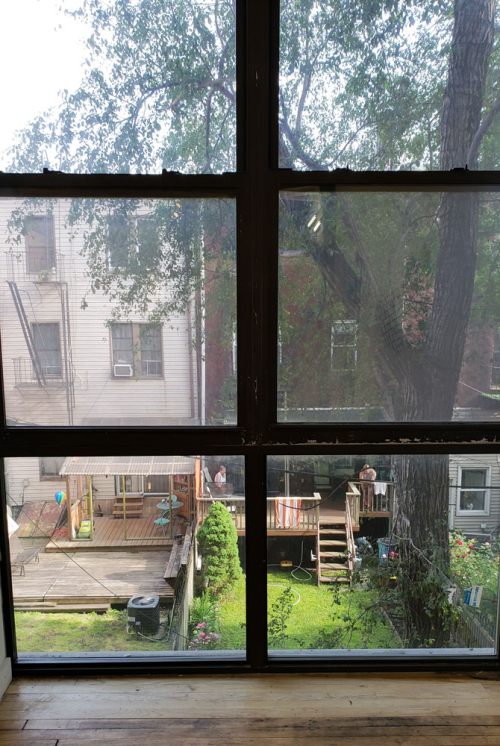 I drove back to Brooklyn, arriving just in time to watch Kate hang the last pieces. The room had this great floor-to-ceiling window that looked out on some backyards. If you look, you can see a couple on the right hanging out and trying to catch a breeze... I didn't realize until later, when I saw the guy go back into the house, that he'd been standing there in his underwear! Haha. Whatever it takes... Lucky for Kate, the venue had AC!!

On Saturday, I had a lovely (if sweltering) morning walk through Central Park (which, despite a few visits to NYC, I'd never set foot in before!) on my way to meet MDK Kay for a breakfast date! She brought some of her Alabama Chanin Flag Quilt to show off -- utterly amazing -- and it was so cool to see my Wisconsin Blingfish nestled and sewn into its stripe. The quilt's been shining on Kay's IG feed lately, though Shakerag (the top)/Shakerag (the workshop) will soon be taking over, no doubt. After breakfast and show & tell, Kay walked me over to her LYS, Knitty City. 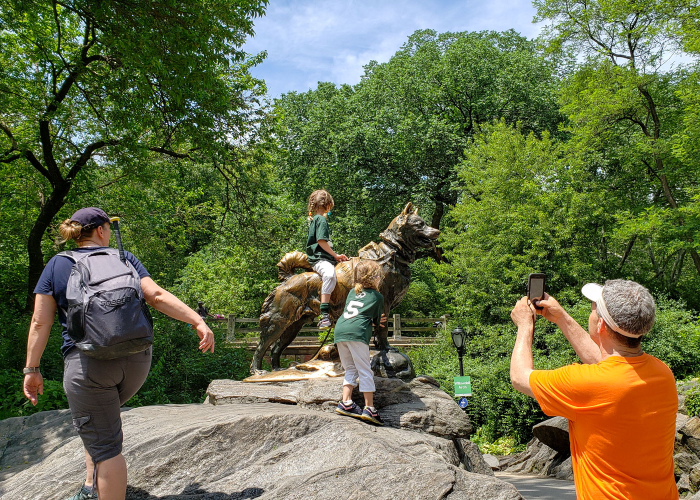 I walked through the park on the way back, too, and found Balto (along with some kids & their parents)! 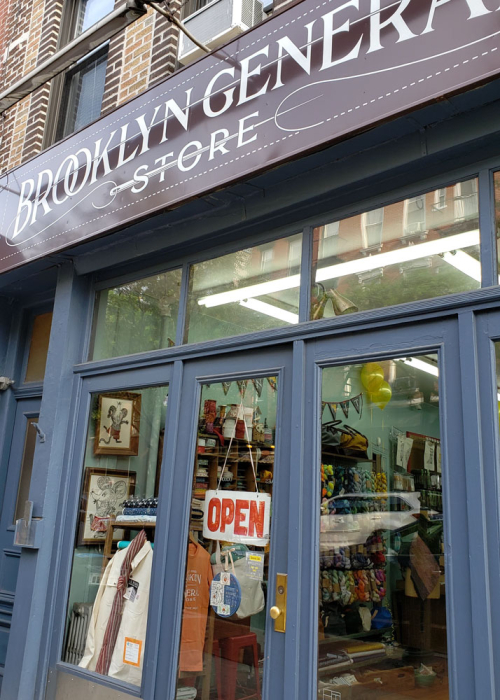 I cooled off at the hotel for a while before heading over to Brooklyn again, where I sat with Kate at the show (always cooling off). Then I walked over to Brooklyn Craft Company, and from there I grabbed a Lyft to Brooklyn General Store -- two shops on my list. They were pretty different -- BCC is newer and smaller, BGS a bit larger and with much more inventory, and also happened to be celebrating their 16-year anniversary on that very day. I found out later that I narrowly missed a run-in with Kirsten Kapur there! (New TTL Mystery Shawl set to drop in a couple of weeks... I'm desperate for my arm to feel better!!) 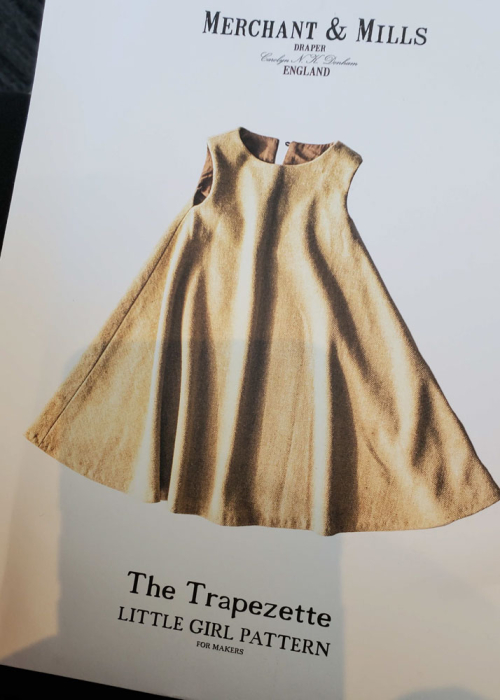 With all these shop stops, I came home with much more yarn than I needed (pfffft), but also some fabric to share with Ali and this adorable Merchant & Mills girl's dress pattern (BGS had a sample and I couldn't resist!)! 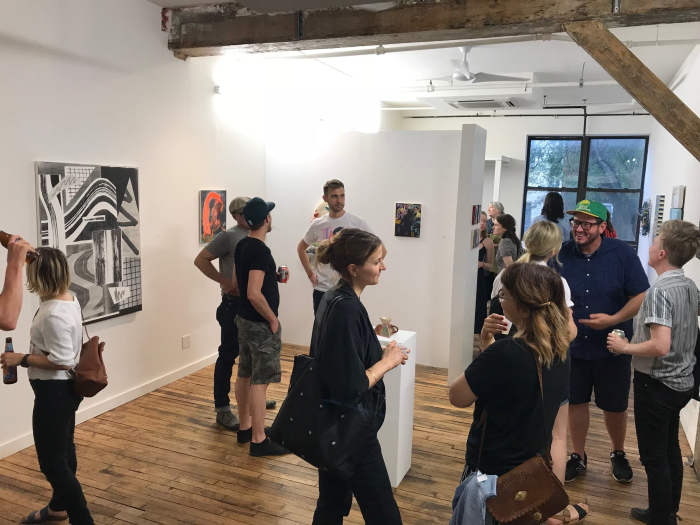 Kate was in Brooklyn 'til late on Saturday, celebrating art & artists & CONVEYOR's huge success, so I had a lovely dinner on my own at our hotel. I spent the evening in, finally casting on my first WATER hat (current donation total = $6000 + counting)! 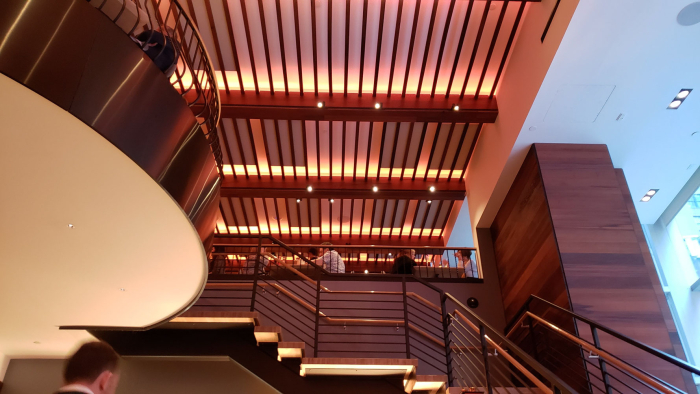 We had some great meals in NYC, including dinners at Fig & Olive and Empellon (photo above, view to the upper level from our table) -- both excellent and close to our hotel!

I went out for coffee on Sunday morning and found the street closed in front of our hotel, along with a couple of others, and police everywhere. The Celebrate Israel Parade was happening that morning on Fifth Avenue, and security was high -- including bomb-sniffing dogs and sharpshooters. There hadn't been any specific threats... I can't imagine if there had been! I left a little earlier than usual to get to the airport.

I had enough time in Chicago (especially since the flight arrived :30 ahead of schedule) to finally use one of my (unexpired) passes to United Club Lounge. Oh, hell yeah. 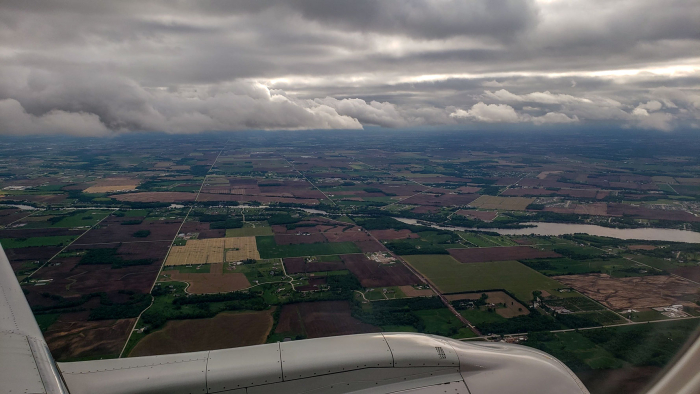 It never gets old! 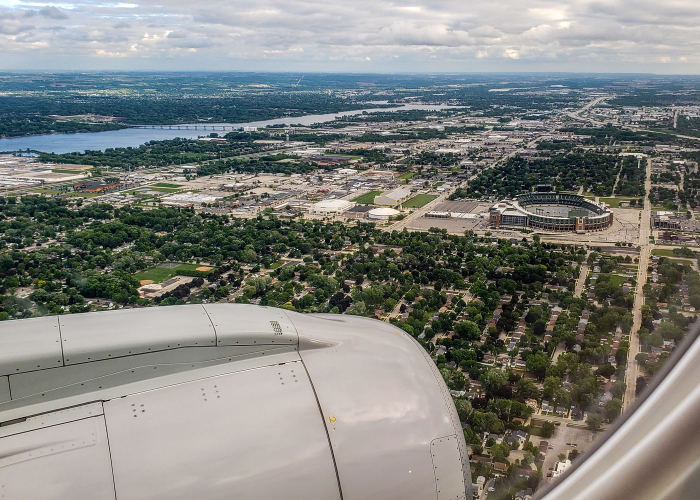 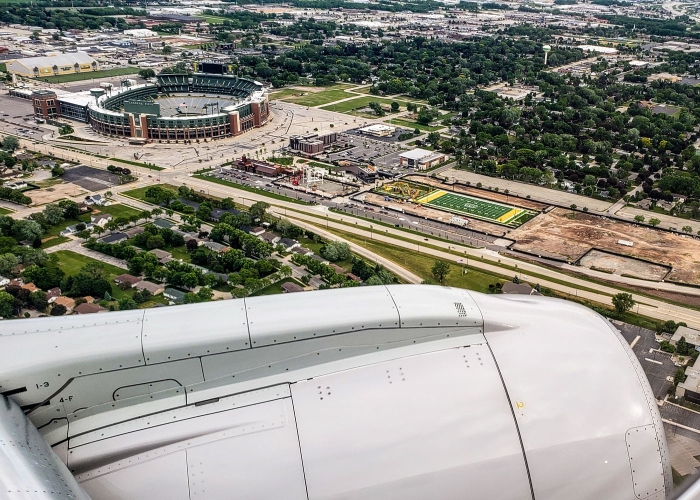 We had pretty great flyover on the approach into GRB... couldn't help thinking that Randall Cobb 🏈 on board had an influence on the pilot! 😉 RC was actually on the other side of the plane so wouldn't have even seen this amazing view. That's Mecca of the NFL... er, Lambeau Field on the left and the new Titletown development extending to the right (there is much more to come).

Despite the heat, it was such a fun trip!! It was so great to visit new places (Brooklyn, Central Park) and long-time friends.

That does sound like a fun trip, but I'm exhausted just reading about it! :-)

I'm hot and tired just reading this post! But it does sound pretty great!

Whew! Sounds like a lovely whirlwind of a trip. My last trip to NYC was sweltering and yet I also came home with far more yarn than needed. Hope your arm heals quickly.

Sounds like a fabulous time despite the rough (to put it mildly) start. You did So Much!!

Those bolt upright in bed moments never bode well. And, great thinking to call to book a later flight! I am not sure my brain would have been sparking enough to think of that! And, it looks like you had a fantastic time!

What a WHIRLWIND!!! So much fun, Vicki. Thanks for taking us along with you . . . vicariously. XO

oh I'm so glad the only scary bad part was at your house before you left! NYC looks amazing (as always!) and I do hope you had some 1:1 time with Kate ... I already know you had 1:1 time with "a few other knitters" ;-)

You do whirlwind well! I'm envious of every place on your trip! Walking through Central Park, a visit to a NYC yarn shop and a visit with Cara and the girls!? OH MY! Heavenly.

Too bad you had such a rough start to your trip. When the girls were little we did a tour of NYC sites that they knew from movies. Balto was on the list- Sounds like you had a fun filled, rewarding trip. What a cute dress pattern. You will no doubt give it the Alabama Chanin treatment. Did you see strawberry fields in Central Park? Lots of fun yarn is always good to bring home. Thanks for the great pix.

Yup, Bonny heeded your warning! Thanks!