And I thought August would be a fairly quiet month! Ann's back in Spain, Maddy's come & gone, Rusty's returned, I've been to Chicago for my "monthly" trip, I had a few days off early this week... and, boy, I really needed them!

Meanwhile, backing up a bit because I don't want to let this pass, two weeks ago, on Auntie Camp weekend, there was also a Civil War Reenactment at The Grignon Mansion that was on our list of possibilities. (The big kids & I went to see the Menominee Nation's Native American Dance Performance there in late June.) They used to have annual Civil War events there, but that hasn't happened in quite a while... the last time was quite some years ago (my girls were in grade school) and it was quite large -- there was cavalry! There was also a hospital where a soldier was apparently undergoing amputation without anesthesia and, let me tell ya, the guy could have won an Oscar for that performance! The girls were very nearly traumatized and we weren't even very close -- several yards from the tent -- yet it's the #1 thing that vividly springs to mind when anyone thinks "reenactment" around here.

So, anyway, we didn't make it while Mack & Addie were here and I wasn't quite sure what to expect (not really jonesing to traumatize my grandkids), so Kate & I checked it out on our own on Sunday. Historically, every event I've attended on the Mansion grounds has had free admission, with optional paid admission to take a tour of the house; this time (smartening up a bit?) admission was charged for the event, which included the house tour. It's quite a lovely house.

Camp was quite small and there was only a small skirmish each day (no cavalry)... 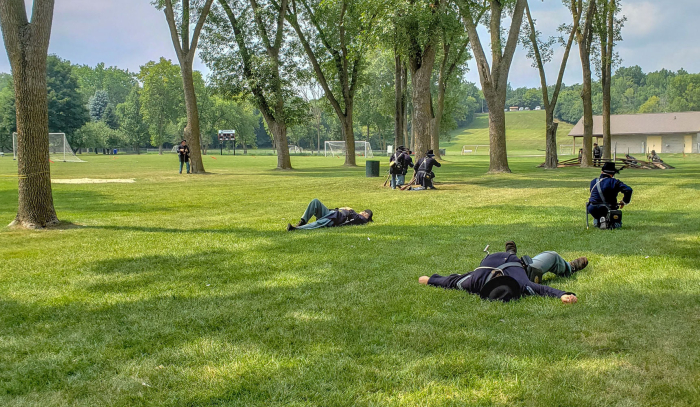 If you can block out the soccer nets, scoreboard, trash can, and pavilion... it could almost seem real! Haha. As I watched events unfold, I thought to myself that it would surely have moved along much quicker in real time... in the 1860s, the soldiers would, most likely, have been 30-40 years younger than any of these guys... a bit more fit, spry & agile, less concerned about bad knees and backs!  :)

We took the tour and were told that normally scripts were memorized but, because it was a special event, this time they'd be read. These two, alone, were worth the price of admission! 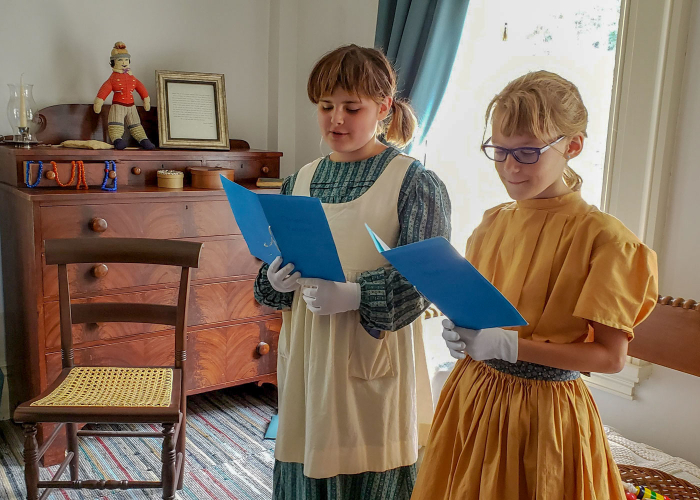 They took turns reading, lass on the left going first... but constantly being corrected (incorrectly a few times, btw) by lass on the right... bickering & shushing and, dang, those pigtails! They were the cutest, most realistic reenactors of all! (Do you see what I see?) 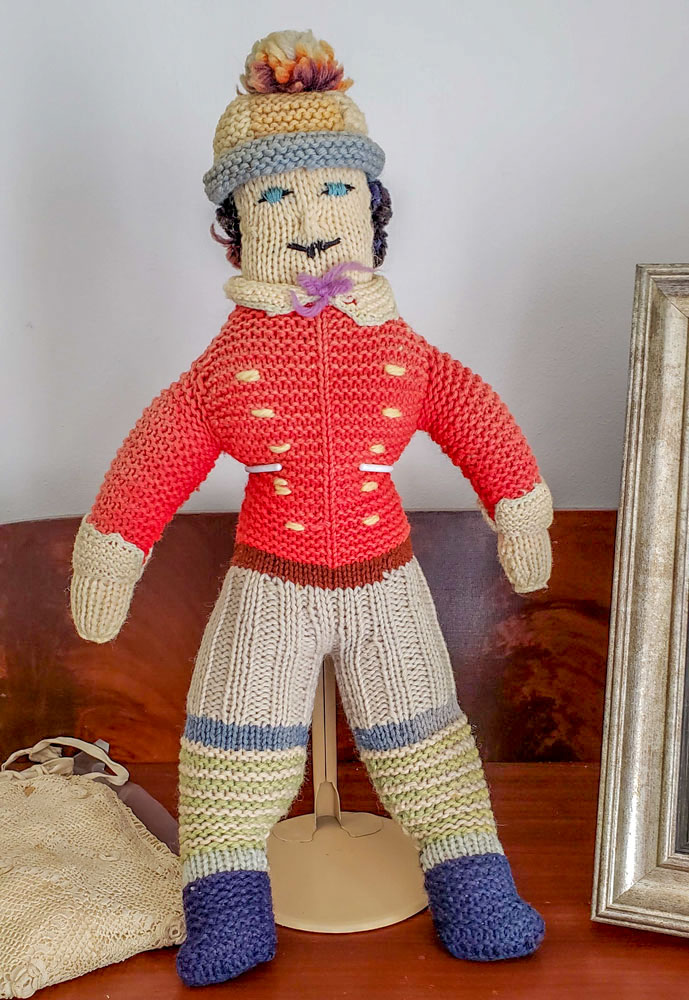 I spotted this guy on the dresser right away and was hoping there'd have been more information. I haven't done any research but, holy cow, isn't he amazing??

The view from the kitchen window was a bit more transporting... 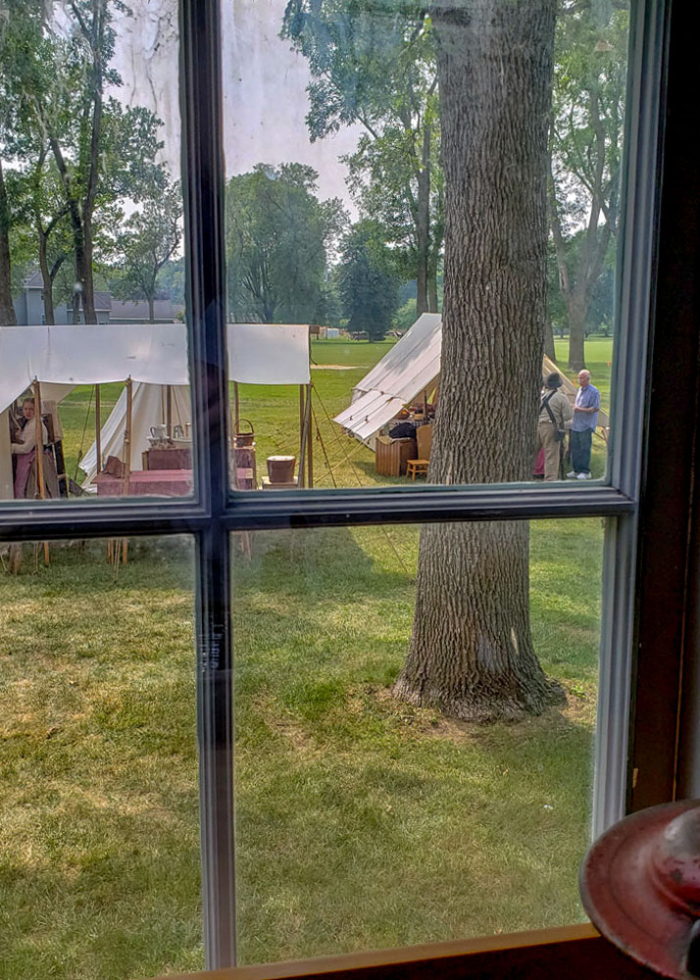 ...minus the guy wearing white tennies on the right!

I'm glad we went! I was told that attendance wasn't that great, but they intend to continue and grow the event every year... I hope so.

And now, I'm looking forward to the holiday weekend, as I'm sure you are, too! I promise to catch up soon.

What an interesting reenactment! I've attended a couple of them; my favorite was the one with women knitting socks with silk/wool and long steel dpns. Of course, the men drinking Diet Coke detracted a little bit. I am glad I've never been scarred by an amputation!

I'm betting that you could recreate that knitted doll and he would be wonderful (cuffs on his jacket and everything!) Hope your weekend is great!

LOVE that doll! (I saw it right away -- before I even took much notice of the girls.)
My dad dragged us to Gettysburg on a family vacation once. I was about 8 or 9. We went to this wax museum that featured a GIANT (lifesize) panorama scene of a battlefield -- you sat in an auditorium and they shined spotlighs on various "events" on the battlefield, with accompanying narration. One "scene" was an amputation. Oh my god. I AM STILL TRAUMATIZED!!!!

The knitted soldier is just magnificent! I can imagine a little boy being born and his mother knitting this treasure for him to play with. I think he didn't like it much as it has survived in fantastic condition!

Battlefield surgery probably does leave a little to be desired. Too bad this one carried scars for people who weren't even on the table!

What fun! And, that knitted soldier! WOW! Amazing!

I'm so glad you went ... and could share a less bloody version of a re-enactment than we normally see around here. Now I'm wondering, though, if I've missed out on seeing vintage knitting!

I love that knitted chap! Glad you and Kate got to spend the afternoon together!