I enjoyed a fairly productive and relatively quiet weekend. It's been a busy summer and that will continue right to the end; Auntie Camp next weekend before Ann & fam return to Spain, and a send-off for Maddy & Viv the following weekend before they set off road-tripping their way to Oregon for the vintage.

On Friday night, I noticed that my internet was super slow, so I called and spent a good half-hour on the phone with a very nice customer service rep; in the end, it was determined that I needed a new modem. I could have waited until late Saturday night for a house call, but decided to just go and do it myself on Saturday morning. I've been meaning to go in & discuss my service, anyway. So I did that... and now we no longer have a home phone! It's the end of an era. It had always been cheaper to bundle service, so we've had an active phone number, but haven't actually had a phone connected for months (we haven't had cable TV in 7-8 years), but the pricing structure has changed and now I'm saving a whole lotta money every month.

Ali asked me to come down to the market at noon and watch Malina for a bit while she closed up the Coffee Camper. 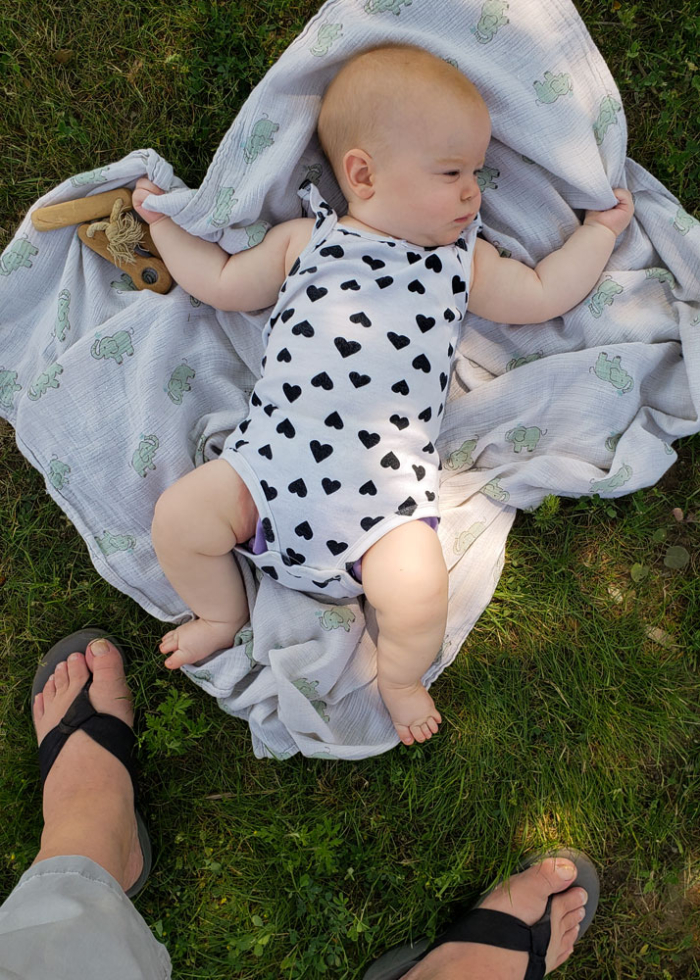 So I got to hang out with this little chickie for a while... she enjoyed some diaper-free wiggling in the shade!

Incidentally, on Sunday, I was putting a few things away and ran across this photo of Ali: 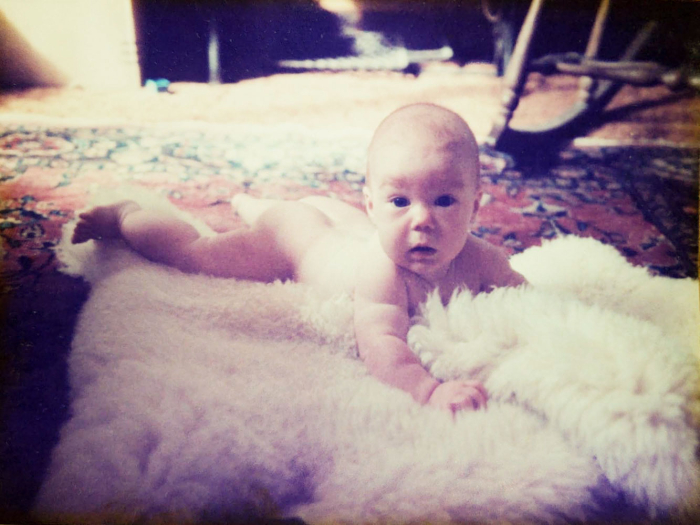 She must be just about the same age that Malina is now! I've sent it to her and am hoping for a recreation of this photo...

Maddy came home on Saturday afternoon to crash a wedding with friends. We made a lovely dinner together before she headed off. 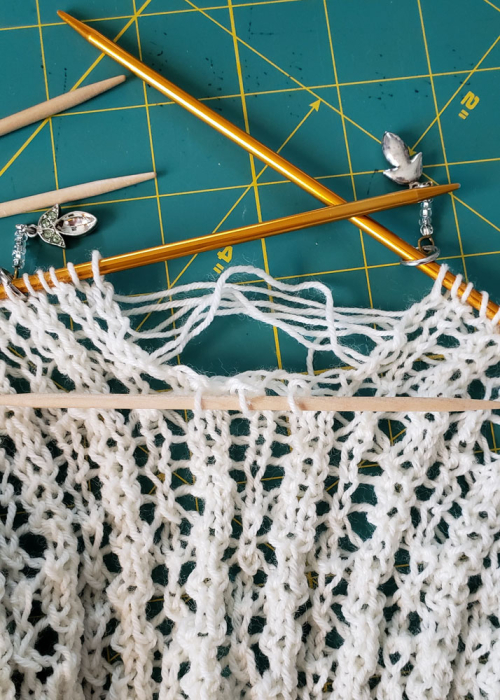 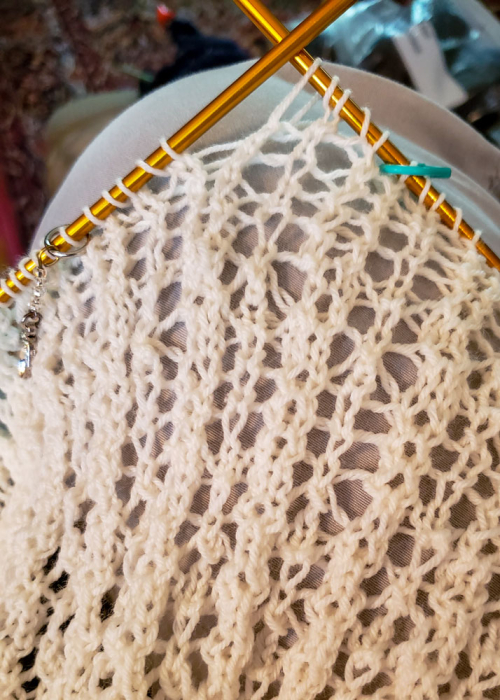 I fixed my knitting and bound off while marathon watching The Wrong Mans, which I enjoyed quite a lot! Who mentioned that program? I feel like I read about it on a blog but I can't remember whose!

So, a busy Sunday began with soaking and pinning out my 2018 TTL Mystery Shawl: 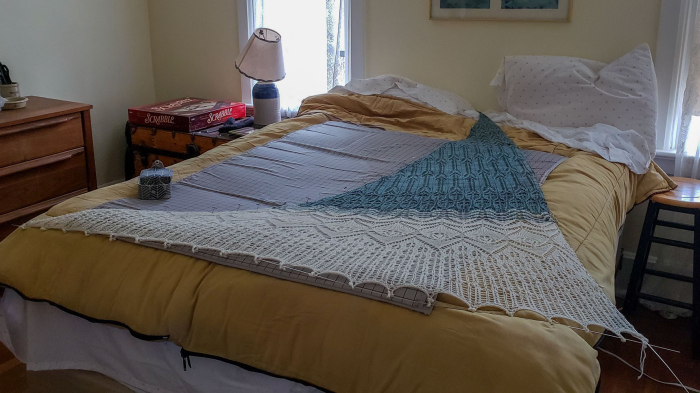 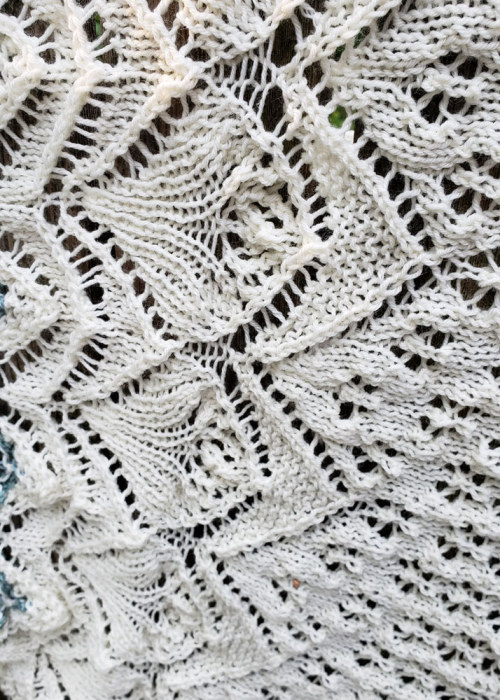 There's a peek, unblocked. Let's just say that IT'S HUGE (that's a double bed up there) and I LOVE IT!

Then I ran a bunch of errands... getting a tire fixed on Ginny's bike, picking up clogged drain stuff, dropping off some donation stuff, and also taking a few boxes to the girls' storage unit. When I came home, I unclogged a couple of slow drains, did a bunch of laundry, started cleaning up the garage (site of some future Auntie Camp activities), and bleached a shirt. 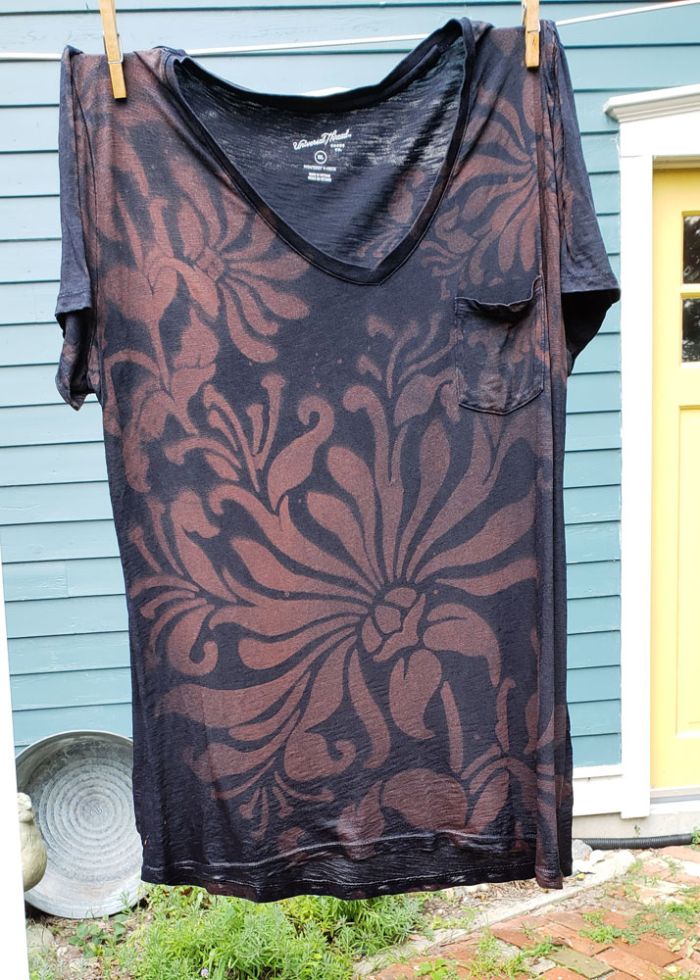 Someone had shared some photos of this discharge technique on The School of Making's FB page last week and I was excited to try it! I made a 2:1 water/bleach mixture in a spray bottle and used my Alabama Chanin Magdalena stencil. I laid my shirt out on the sidewalk, arranged the stencil, lightly sprayed, and watched the magic happen! I was working on the sidewalk right by the hose & just hosed everything off after a couple of minutes. It doesn't take long to work! Upon further reading, I might have used something to stop the bleaching action... we'll see how this fares in the long run (it is a fairly fine cotton knit). I had nothing between the layers and it did not soak through... except one little spot where I sprayed quite a bit as I got started (...is it working??). You can make out a little overspray on the inside back and even that didn't go through! I hung both the stencil and the shirt on the line and sprayed/rinsed them even more. Next time, I'll blot the stencil before moving it (there are a few drippy spots) (which I actually like)... live & learn. It was super quick to do and now I want to BLEACH ALL THE THINGS!! 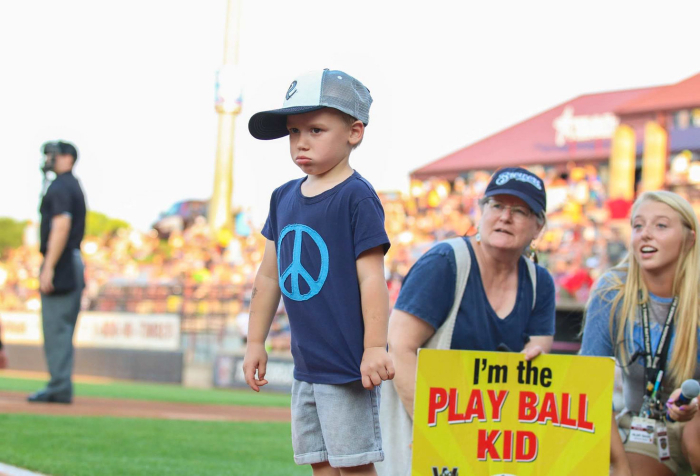 There was a company picnic at the baseball park on Thursday evening. This photo of Junah was shared on Friday, the "Play Ball Kid" who didn't wanna! This just cracks me up... it is SO Junah! I believe we're all looking at a coach in the dugout who was trying to coax Junah into cooperating with the promise of a baseball. Um, it didn't work. Poor kid. For a 4yo, it was a very long & boring wait to get to this moment; he did phenomenally well, but had fallen just a few minutes prior to this and skinned his knee. The rest of the evening was fabulous, though.

I hope you had a great weekend!

I love that photo of Junah! And your t-shirt - whoaa - that's fabulous! I'm wondering if a non-Alabama-Chanin technique is available for something similar. Is little Malina going to be a redhead like her mama? It sure looks like it in that photo.

I was unsure about the TTL (and didn't have time anyway), but I'm convinced it is a great design! It's staying in my queue! Malina looks a lot like her mom (including red hair)! You make me want to buy an AC stencil (or two). I love the way the technique worked out!

The t-shirt is AWESOME! Hmmm, I might need to get a stencil or two! And, I was thinking that Malina looks so much like her mom! (That blush of ginger on her head is just gorgeous!)

Aw, I love how much Malina and Ali look alike! (and I'll bet you get a recreated photo soon ... provided Ali has a rug like that ;-) LOVE LOVE LOVE the bleach effect on your shirt. and the moment with Junah. Charlie won't be four for a couple more weeks, but whoa, I know that look! and congratulations on your MKAL finish! You did a great job with the fix and the blocking :-) I promised my Monday girls I'd have mine finished by next week for a group FO shot (yep, I'm trailing the pack) and I can't wait to see how it turns out.

Okay. So now I want to bleach ALL THE THINGS, too. I am going to dig around today . . . for something to bleach. (As you know (!) I have plenty of stencils to choose from. . . ) I love the photo of Junah -- and the story behind it. He is wonderful! I'm in awe of your fixing skills -- the shawl is so lovely. XOXO

Yikes! You have been SO productive. LOVE the tee - gorgeous. and your shawl finish just amazes me (especially having seen the mistake earlier!!). Junah is just wonderful in that shot. And precious Malina - so beautiful.

Oh my goodness, that shawl! It would never make it in my House of Cats. What a beauty.

And A Naked Baby on a Polar Bear rug: classic!

That Tee is gorgeous. I'll have to remember that technique.