Mickey Mouse was everywhere this summer -- did you notice? Well, I don't get out much, but notably in my world at Target and Joann Fabrics. It's Mickey's 90th birthday... and I can only imagine what that means for 2028!! We've a soft spot for that guy around here, which hearkens back to my childhood and the nickname "Mouse," given to me by my dad; he didn't mean Mickey Mouse, just that I was as small as a mouse, but everyone else translated it that way and I used to get a lot of Mickey-related gifts.

Well, I fell for it. It started with a fat quarter bundle and an adorable Geranium Dress/Top for Malina, and continued with similar for Ginny. Junah wanted in on the action, too! Specifically, he wanted a dress... which I did cut out but haven't sewn up yet. I got sidetracked by a Hawaiian Shirt for him, instead!

I finished the shirt in July! 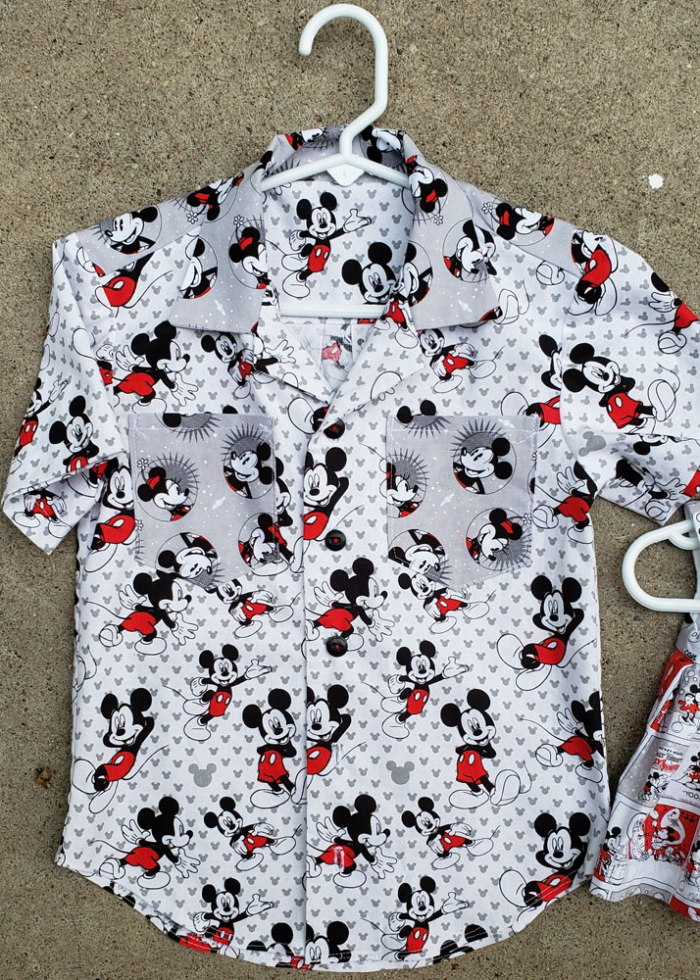 I found the perfect vintage buttons and used red thread -- love how that turned out. 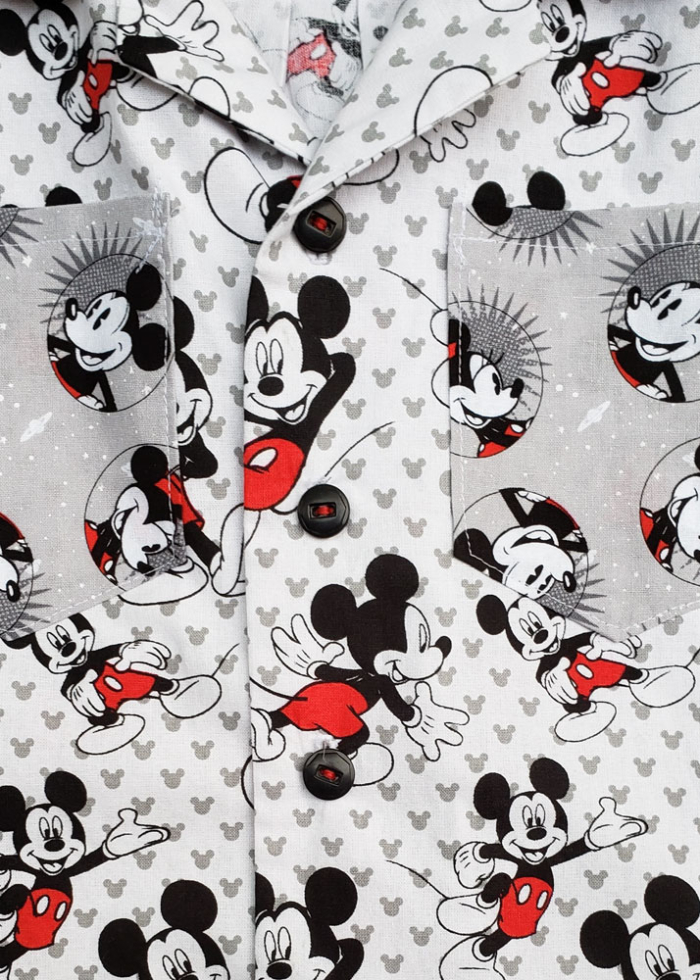 The buttonholes should have been made a tad larger, but Junah was able to button it himself the other day... with some gentle reassurance that it was definitely tricky and all my fault and he was doing great!

Here are all three pieces: 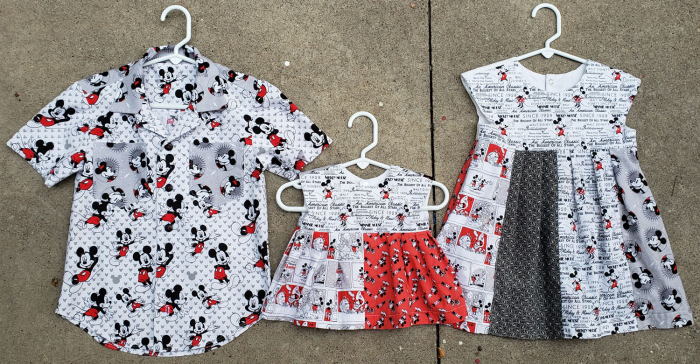 They've been hanging in my workroom for WEEKS. I finally finagled all the kids into their Mickey duds on Wednesday when we headed to the park.

In SUPER coordinated fashion -- with each other and the stroller and the bicycle!! Haha! 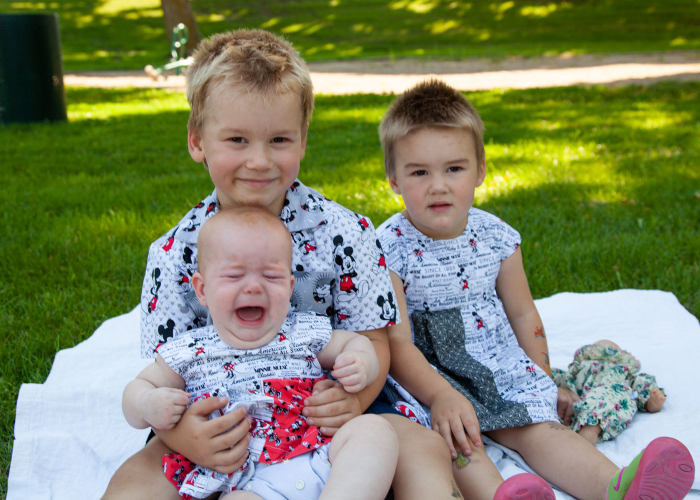 Um, yeah. That's the way it goes sometimes! (And the kids -- poor girls, especially -- have been eaten alive by mosquitoes!)

We tried again at home with slightly better results: 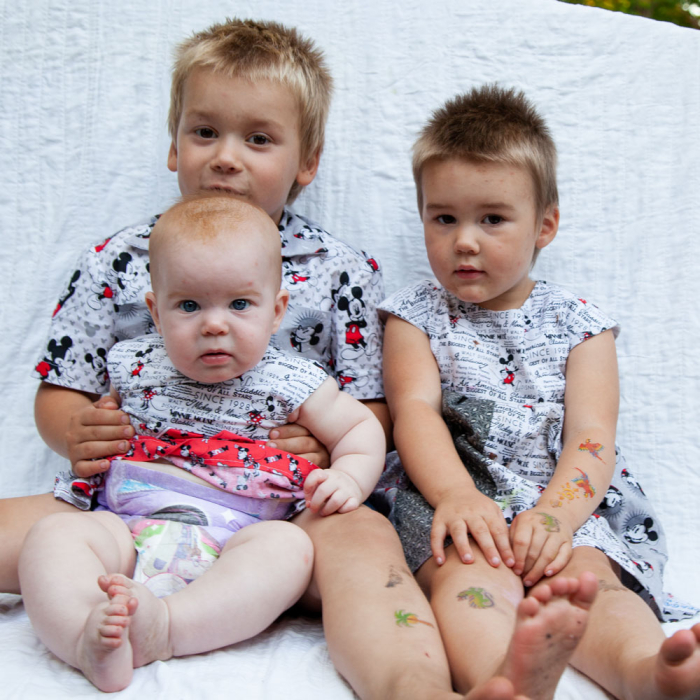 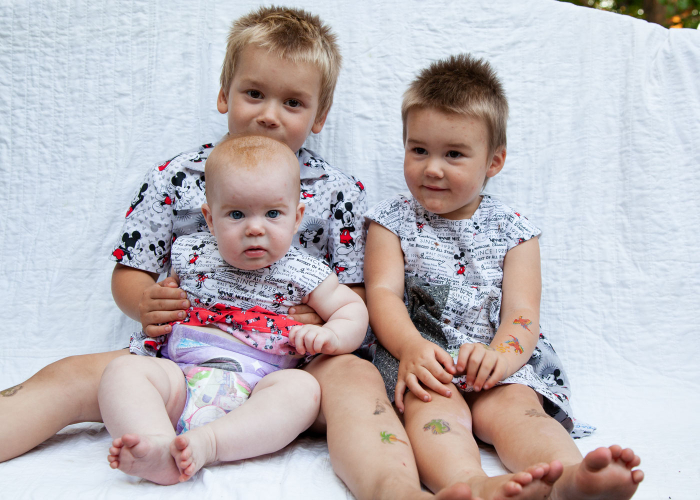 Though you see more of Malina's diaper (actually, emergency use of one of Ginny's pull-ups) than dress!

I had a blast sewing those pieces, and have quite a bit more fabric... so maybe some Christmas sewing is in my future.

Jun's shirt is AWESOME! And, those girlies in their dresses! So cute! Sewing for the littles is so much fun!

Those matching outfits are wonderful!!! And the expression on Jun's face in that first photo is priceless. I think Gin is starting to look a lot like you, Vicki.

These matching outfits are just wonderful, and I love the photos! If they're anything like my kids, your time for getting them to wear matching clothing is limited, and perfect photos with everyone happy and sitting still at the same time are not what happens in real life. Keep sewing and taking photos of your adorable (and growing fast) grands!

Great job on both the sewing and the photos. I love the one where Gin is looking at her brother like, "Are you making her cry?".

Oh Vicki - the outfits are perfect, and even better modeled in real life! I LOVE those first two photos with Malina in tears :-)

I loved it when my mom sewed matching dresses for us girls. Your work is beautiful and you must have a blast deciding what to make for each little one. Keep sewing and, better yet, keep taking pictures of the three! They're fabulous.

Adorableness all around! The darling outfits. The kiddos. Everything! I think the best "group shots" are the REAL group shots. With kids acting like kids . . . mosquito bites and "tattoos" and tears exasperation and all. Those are the photos I treasure the most, actually, now that my own kids are grown up!

And YES to Christmas sewing!!! XO

These are all so wonderful Vicki - the clothes, the kids and the pictures! Their expressions are priceless (even Malina crying). The bugs this year have been horrid! For the first time ever I am covered in bites and constantly scratching.