I didn't even finish talking about the weekend before last -- Sunday, anyway -- in which I took this: 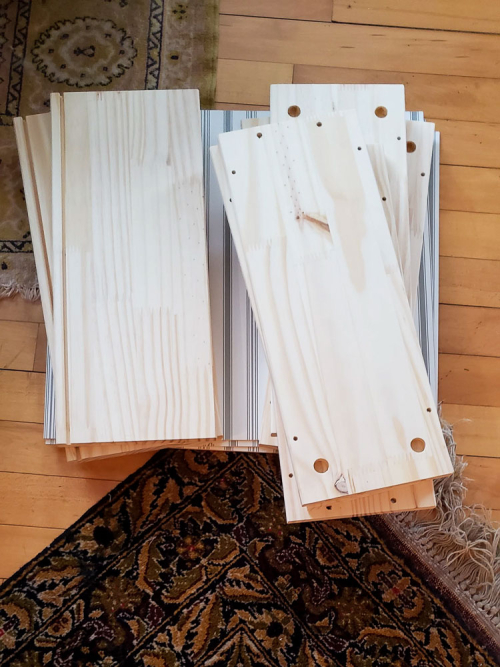 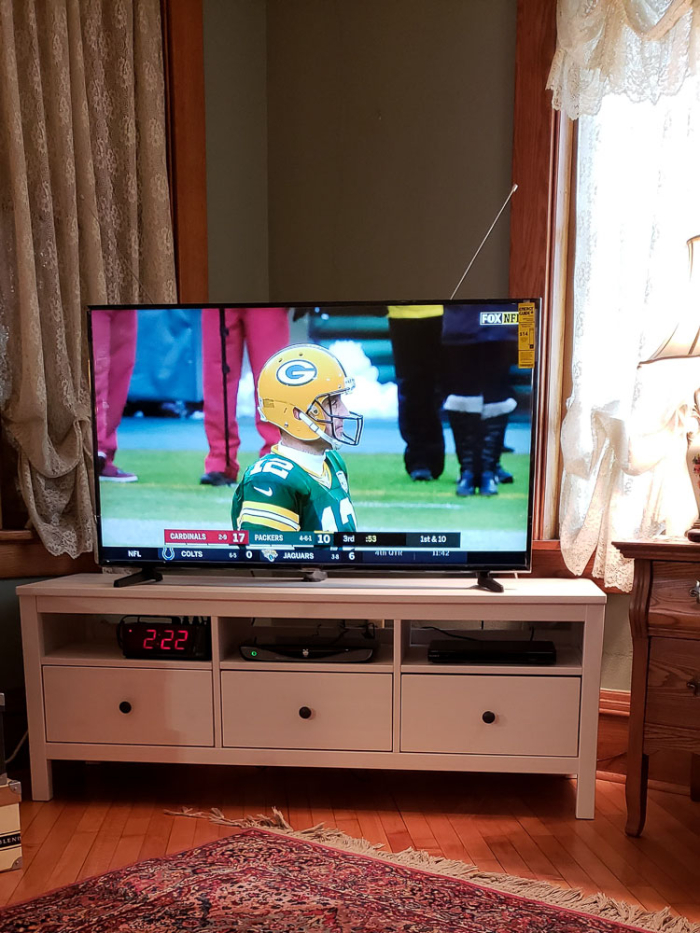 It took a lot longer than I'd hoped (I had a LOT more things on my to-do list) (still do), but it's done and I love it!

Last weekend started on Thursday evening with the first Christmas party of the season with the gang from work, and continued with a company-paid day off on Friday! I needed it, too, since I didn't have a regular day off last week. I did exciting things like get my oil changed & a tire repaired, picked up & dropped off packages at the coffee shop & visited with Ali for a while, went to the grocery store and Target. Woohoo! Those are all things that needed to be done, though, and I basically got paid to do them.

Rusty & I drove over to Two Rivers on Saturday for a meeting/gathering of the local chapter of Wisconsin Visual Artists. They met at the Hamilton Wood Type & Printing Museum, and had organized an optional printing workshop... for which we both opted in!

One of my first real jobs was as a typesetter, though I didn't even know that's what I was doing at the time, and it was the very dawn of computer typesetting, so I never actually worked with block letters/art and real leading before. I just flipped switches to get the amount of leading I wanted between lines of type, and actually typed on a keyboard (mostly) instead of plucking individual letters from a type drawer. Either way, what was being produced was not the end-game... it was all destined for the printer! And though I never printed a darn thing in my life, I was in that environment for many years... and, coincidentally, Rusty owned a print shop at one time (long before I met him), and my brother also worked in various print shops for many years. 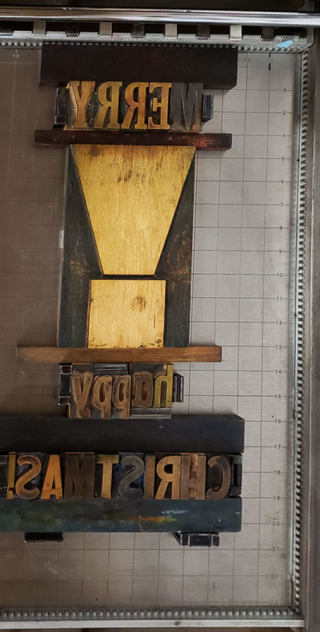 So this experience was both very familiar and very new! 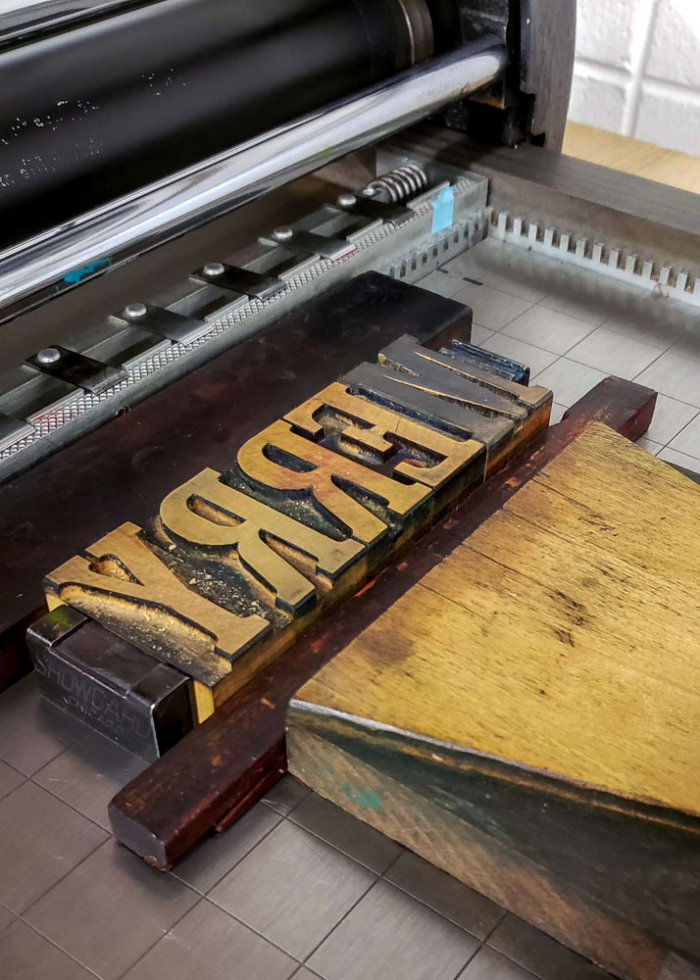 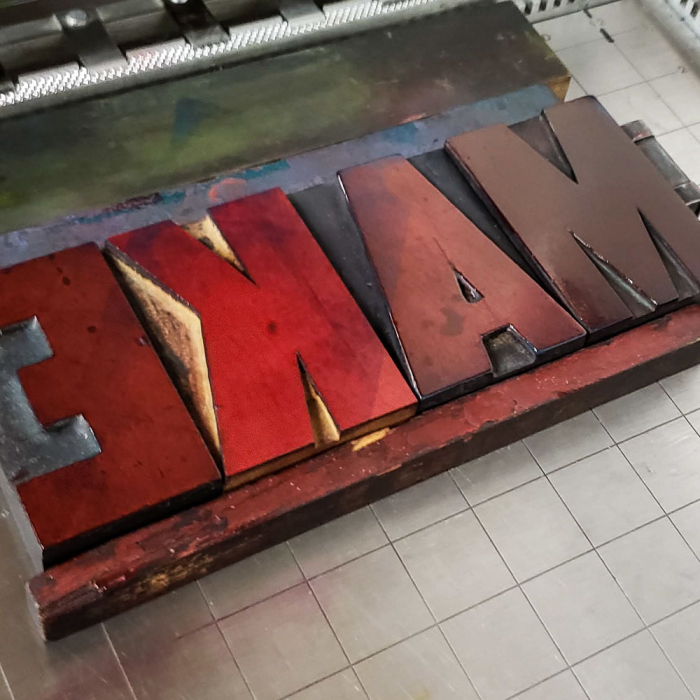 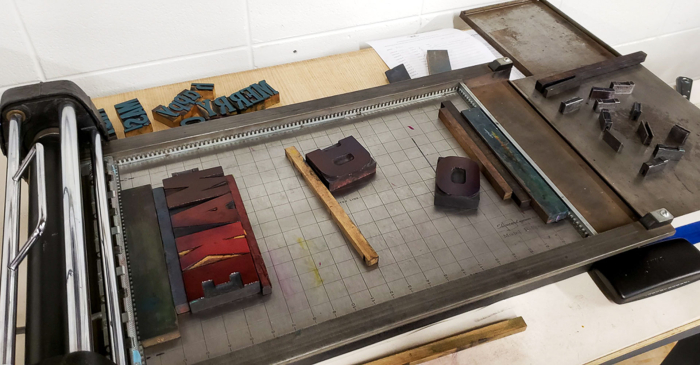 We each had our own little sign press & galley with various tools, some ink & a supply of paper, and a good selection of type and art from which we could choose. I never actually thought about what I'd actually make/print, so I went seasonal first and went from there... here are a few examples of my work: 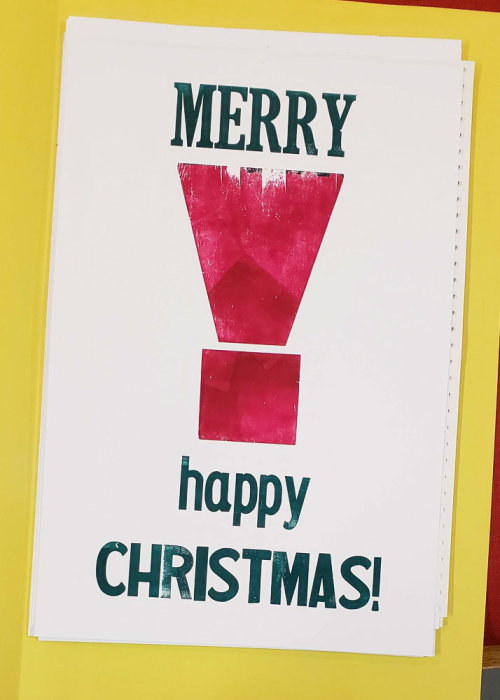 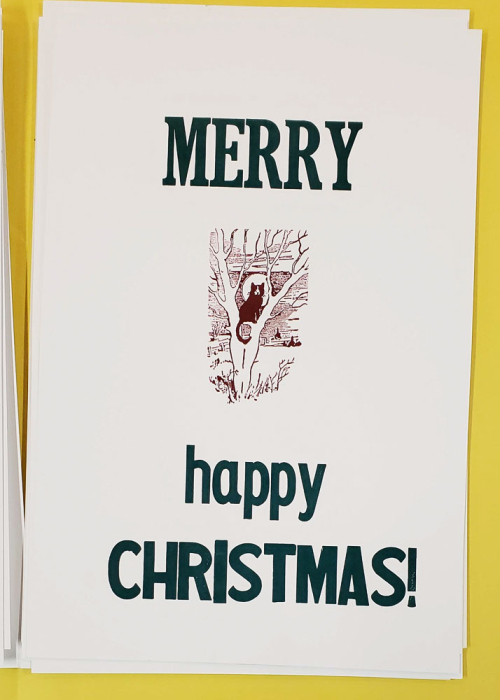 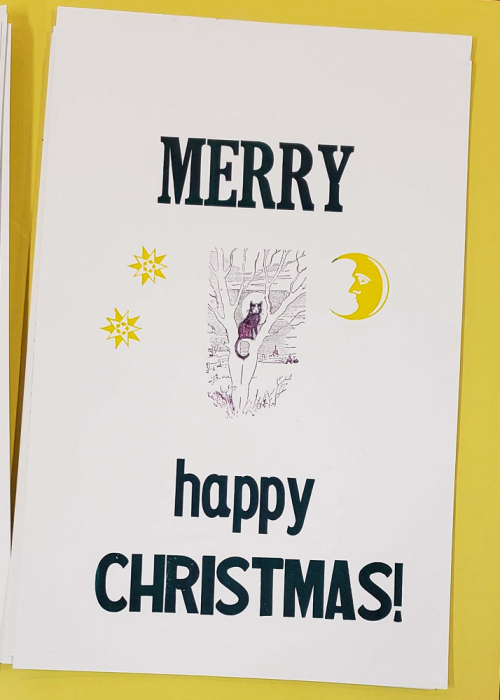 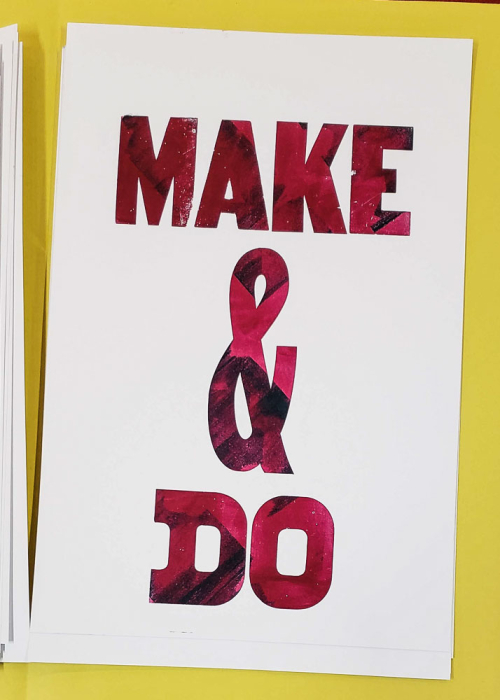 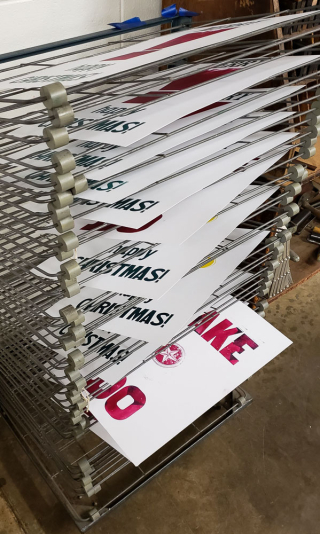 I can't stop thinking about it, so I guess that means that a full-day (at least) workshop is in my future! Time was limited, so I really didn't spend much of it away from my own press, but I did take a peek at Rusty's project: 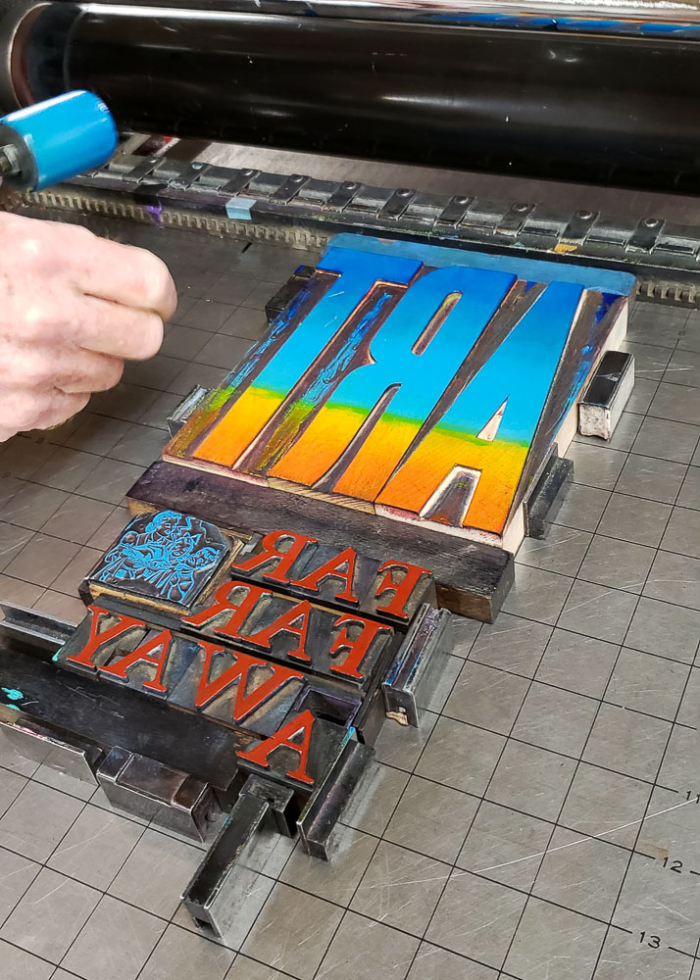 Well, he is an artist!

Edited to add: Rusty showing off one of his prints on the Hamilton Wood Type IG feed!

There was inspiration everywhere: 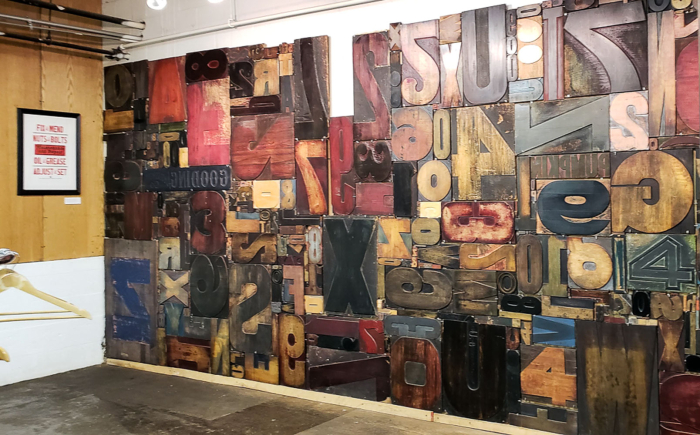 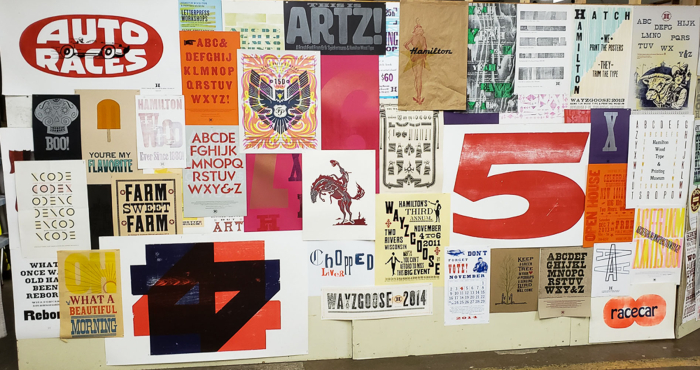 ...including in the bathroom: 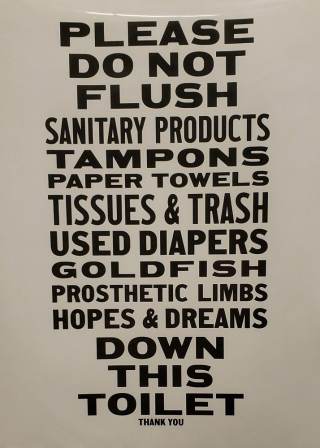 There was an amazing exhibit of Jim Sherraden's work at the museum... 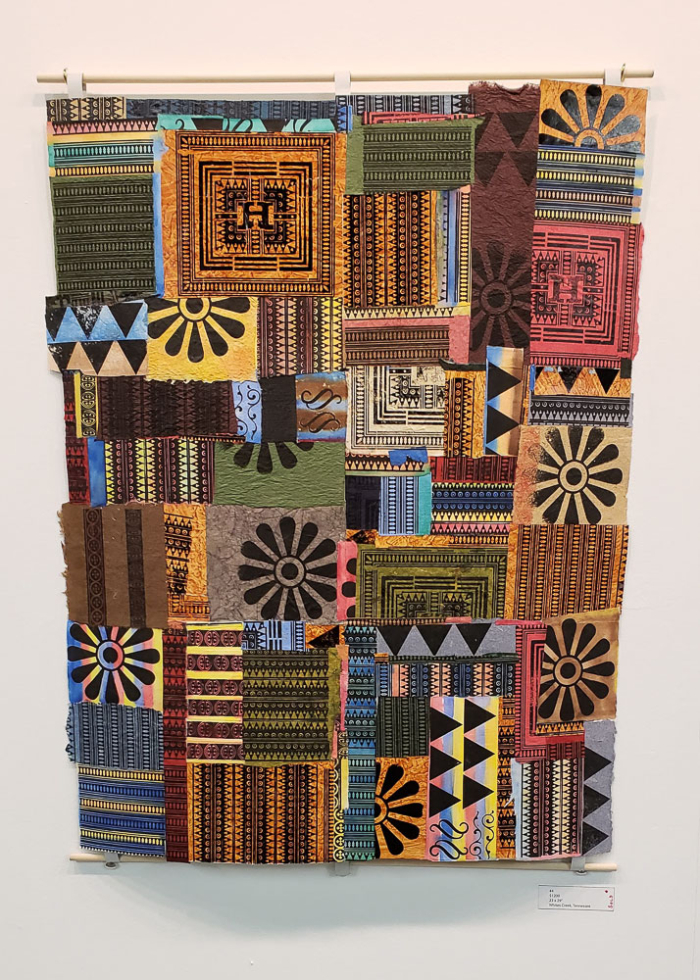 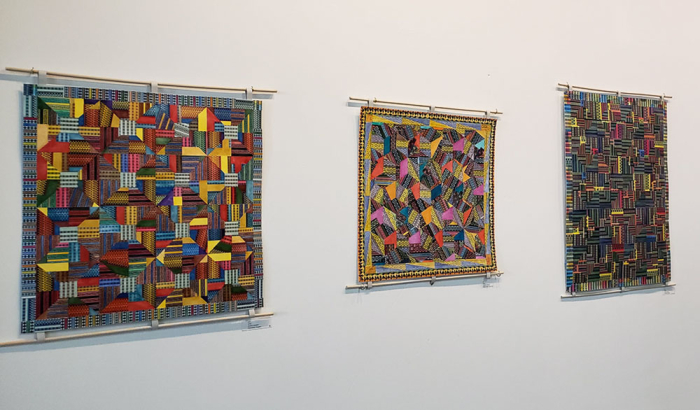 Including these paper quilts. He's apparently been a visiting artist at Hamilton. I didn't know, until I googled just now, that he's famous! Way cool.

Oh, I love that first wall with all the giant letters!

That looks like such fun. Paper quilts!!! They are gorgeous.

Vicki, that looks so cool and so fun ... and I really love that you got to share the experience with Rusty. (do we get to see what his print looks like?!)

Ikea pieces look deceptively simple, but you won! And the print shop does look like lots of fun, especially since no hopes and dreams are being flushed away!

Ooooo! I love "old-fashioned" printing! Way, way (way!) back, when I worked at a newspaper, we used to mess around with the old print stuff after hours (our typesetters were also just at the very early edge of computerized typesetting then). I'd love to try some old-school typesetting some day. What fun!
XO

That press looks like so much fun! I wish I could join you in an all day workshop. I don't know if there is a press like that in SLC.

That looks like so much fun! When Dale and I were in Nashville we visited the Hatch Show Print museum and store. It was overwhelming but next time I go I'd like to try my hand and printing my own poster.

That looks like great fun, but I can see how a little forethought would be helpful. Of course, Rusty brings an artist's eye and thought process to the game. I hope you'll share with us if you do another workshop.

Wow, what a wonderful day of creativity. I love coming along on your journeys. Thanks for sharing.

I would have LOVED that adventure! We should meet at the Cooper Hewitt Museum in NYC! And YAY for the television stand...it looks great!